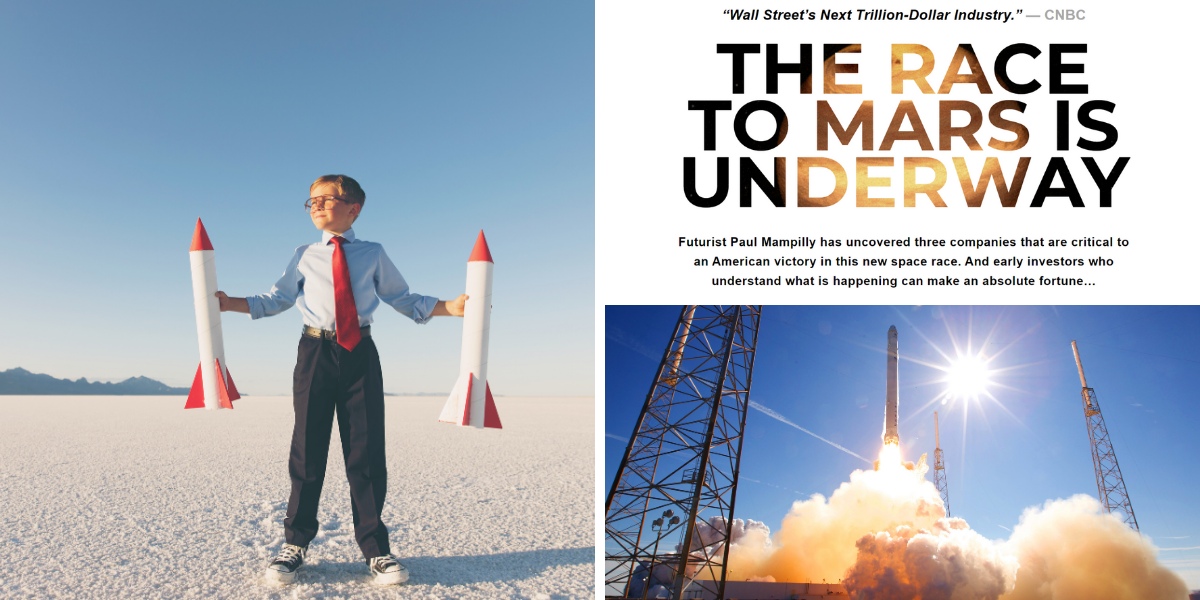 Recently I came across an investment teaser by Paul Mampilly to invest in space stocks, with him teasing 3 stocks in particular.

Mampilly is extremely bullish on space sector (space exploration and space tourism) and he thinks investors who position themselves correctly now could see massive gains in the years ahead.

A look at the teaser:

"The Race to Mars Is Underway", and Mampilly is telling us that "early investors who understand what is happening can make an absolute fortune"... 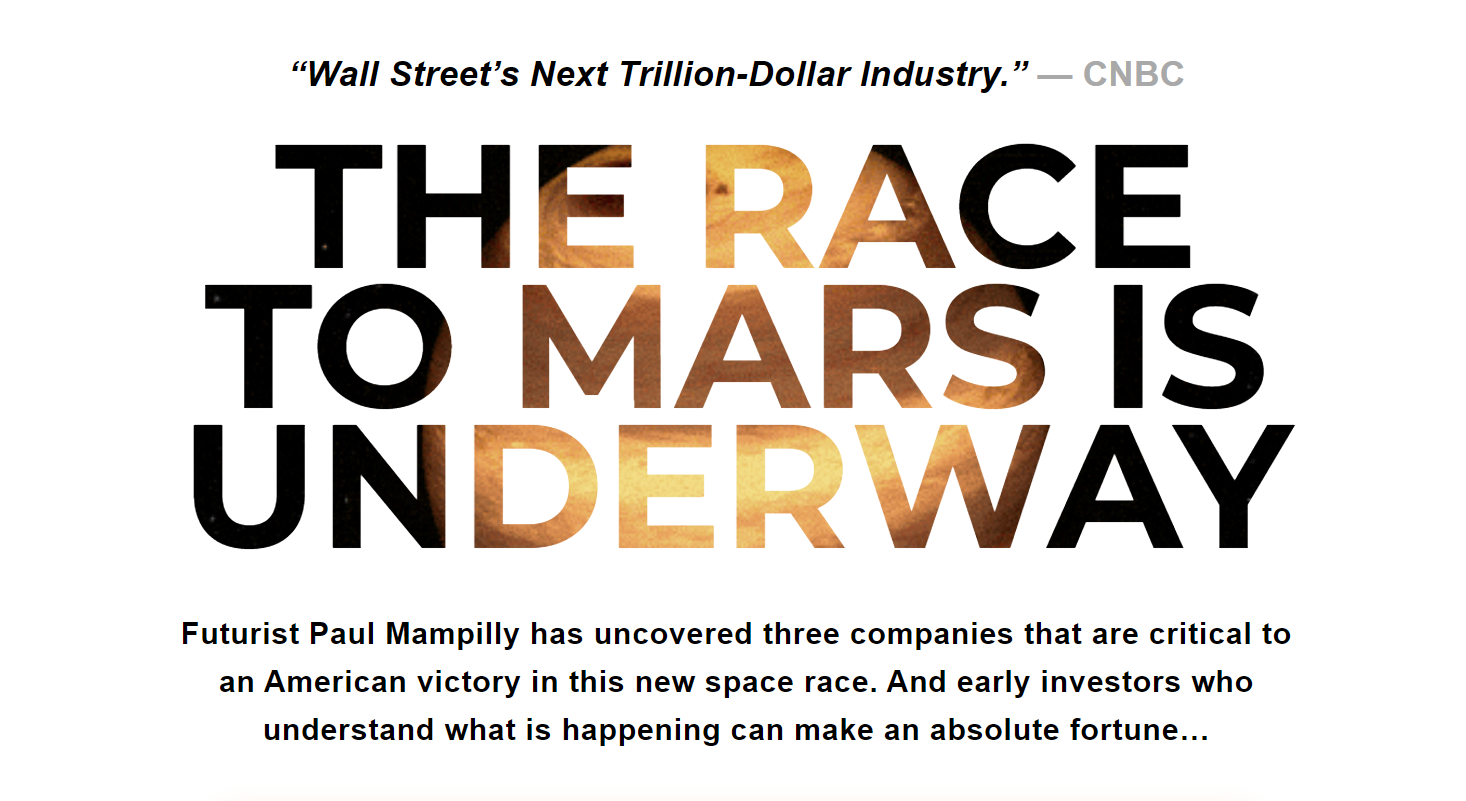 For those who don't already know, Paul Mampilly is an ex-Wall Street hedge fund manager that has quite an impressive background, some of his more notable achievements being that he won an investment competition by making a 76% return during the 2008-2009 recession and having helped turn a $3 billion hedge fund into a $25 billion one. HOWEVER, those who know Mampilly also know that he currently works for Banyan Hill Publishing as an investment newsletter writer and often goes to extremely hyped-up measures to promote his services, such as with his Super Bull Summit teaser - so let's take what he says here with a grain of salt.

As we know, this opportunity is all centered around space, including opportunities that arise in companies involved in space exploration & space tourism... for the most part.

Mampilly is a big supporter of the colonization of Mars and goes on a long-winded spiel about why he thinks it is our "Manifest Destiny" to become a multi-planetary civilization.

Now whether or not you agree with this isn't the point. The point is that it seems more and more like there is going to be a future for humans in space. With big advancements in technology being made and loads of money pouring into the sector, such as from billionaires like Elon Musk, Jeff Bezos, Richard Branson, Mark Zuckerberg, etc., the investment opportunities that will be coming our way will likely be very exciting.

Mampilly talks about how if you missed out on investing in Apple, Amazon or Microsoft, this is your chance to make up for it, and he even goes on to state that "this will be the biggest economic boom most of us will ever see", comparing it to the railroad boom of the 1800s and automotive industry in the first half of the 1900s.

Some other hyped-up claims from the teaser include:

The teaser was ridiculously long and took quite a while to get through, but by the end I was nearly drooling with excitement to get in on his 3 space stock picks... and then came the sales pitch right on cue.

As is the typical sales blueprint fashion with these types of investment services, the details on the companies being teased are not revealed just yet.

Here's the "free" report that provides all the details: A Fortune Made in Space: The 3 Hottest Space Stocks to Buy Right Now... 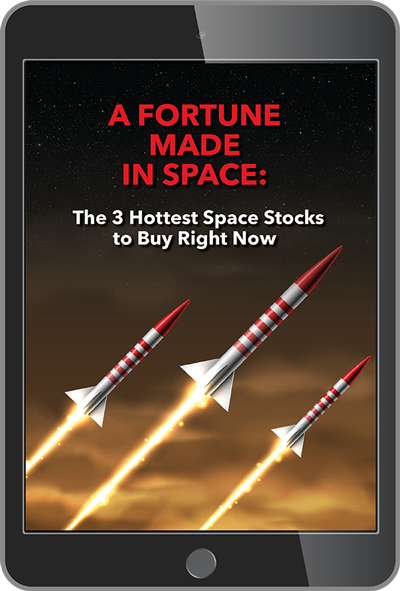 But to get ahold of this "free" report one must purchase a yearly subscription to Mampilly's investment advisory service called Profits Unlimited.

Now the cheapest option here is only $49/yr, but I'm guessing you'd rather just find out the stocks he's teasing for free.

If so, keep reading.

Mampilly goes on and on about why he is so excited about the new opportunities that lie in this sector. He believes money is going to really start pouring into this sector faster and faster as it becomes more mainstream... largely because of 3 developments that were mentioned:

Besides these developments that Mampilly talks about being in place, investing in Space is something we have already seen gain more and more interest from investors and, like all developing areas of investment, there are all sorts of future estimates as to how large this sector will actually grow. I recently read on CNBC, for example, that the Space industry could triple to be worth $1.4 trillion by 2030.

It's hard to put numbers on an industry that is so new and unprecedented. I mean, how can you possibly predict how popular Space tourism might become? Many speculate it could be one heck of an opportunity, with some estimates predicting Virgin Galactic's revenue going from $0 to $1 billion in the next 10 years.

Big potential? It seems so, and without getting too into speculations here, let's expose Paul Mampilly's Space stocks once and for all.

Mampilly's Space Stocks - He Teases 3 of Them

What space stocks does Mampilly recommend you invest in right away to get filthy stinkin' rich? Let's start out with the first...

For this first one he claims to be "absolutely convinced this stock can soar 3,900%... in just five years".

Here are the clues we were given:

Not much to say here. All the clues given are very vague and don't tell us much.

There are a handul of companies that fit the vague description given, but most are privately held at the moment and there just aren't good enough clues to really narrow in on this one.

Virgin Galactic (mentioned earlier) is a potential pick here. It was founded in 2004 (this could be considered a "few" years old), does have proprietary rocket technology, is competing with SpaceX, and it just went public in 2019. The ticker symbol is SPCE.

But this is just a good guess. Any other guesses on what this stock is here are more than welcome.

Space Stock #2 - The Belle of the Big Money

This one Mampilly tells us "could hand us a gain of 1,000% in the next three to five years".

So it's some kind of new manufacturing tech that will be very important to space business, but it doesn't sound like it's directly linked to such.

We are also told that Elon Musk has stated that this technology is "going to revolutionize design and manufacturing in the 21st Century".

Now if you do some research here you'll find that Musk was talking about designing and engineering rockets for his SpaceX company using 3D immersive reality visualizations that designers and engineers can interact with in real time with natural hand gestures, as shown here... 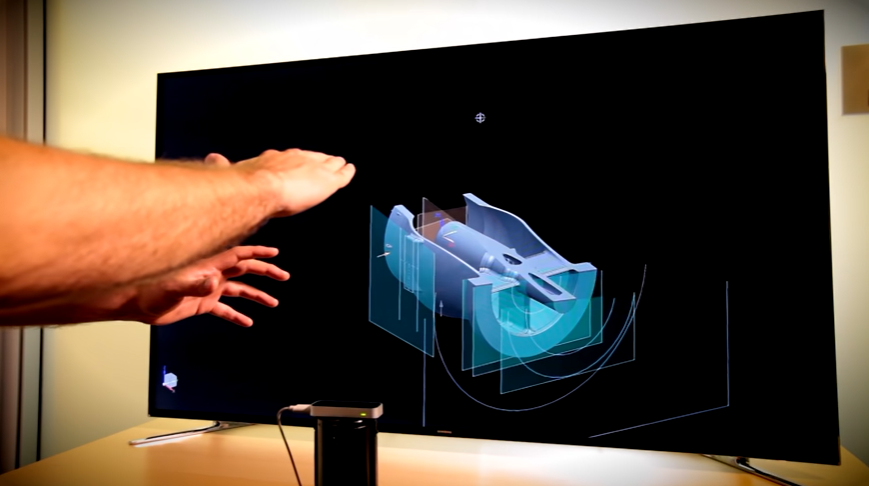 But this isn't the investment opportunity. Musk then went on to talk about 3D printing and it's importance in the process of rocket design/manufacturing.

It makes perfect sense that Mampilly is teasing a 3D printing company here. And he's been very bullish on them in the past. But which company?

Well, the startup Relativity Space has the largest 3D printers and plans on manufacturing rockets entirely with them. It's a space company that is heavily relying on 3D printing company, but this still isn't publicly traded, so that's off the list.

He tells us the company trades for under $15.

So what is it?

Not only does this stock trade for under $15 without trading for too low under $15, but it's a 3D printing stock that Paul has teased in the past. In fact, this was his "America 2.0" stock pick.

All the other clues match up with this pick too. They employ over 2,000 employees (but less than 3k) and their annual revenue from 2019 (the latest data) was at $629 million - Mampilly mentioned this figure being "around $600 million".

And lastly, Mampilly's third pick he tells us is "the biggest and strongest of my three favorite space stocks" and is "the perfect setup for a 900% return over the next five years".

Let's take a look at the clues he gives us:

First off, we need to know what he's talking about with this "digital steel" jargon.

"Digital steel" is just a term he made up. What he's actually talking about here are semiconductors. He's used this term in the past to refer to them, so this is how I know.

And the company being teased here is none other than Microchip Technology (MCHP), which was fairly easy to identify.

Microchip Technology is a semiconductor company headquartered in Arizona and most well-known for analog and flash-IP integrated circuits.

The company has right around 3,765 patents in the US (didn't count them all, but my estimations are right around this number), their market cap is just under $40 billion, and they specifically mention that they "serve more than 120,000 customers across the industrial, automotive, consumer, aerospace and defense, communications and computing markets".

Will You "Make An Absolute Fortune" Here?

As you know, I haven't been able to identify the first space stock Mampilly is teasing here with confidence, which happens to be the one he's most bullish on, but the other two I have.

Are they really 9x and 10x gainers like he says?

Well, as is often the case with investment teasers, these predictions are highly speculative and you certainly shouldn't bet the house on future gains like these.

3D Systems is a top leader in the 3D printing space and Microchip Technologies is a major company in its own respective sector, but both have 12-month forecasts by analysts that aren't very impressive and predicting 9x and 10x gains 5 years from now is certainly a difficult task.

Investing in the emerging commercial space sector has a lot of potential, but neither of the 2 picks I've identified are directly in this space and it's definitely recommended that you really do your homework before purchasing shares of either.

One of the problems for investors at the moment is that there just aren't a lot of choices out there when it comes to publicly traded companies in this space. Much of the companies in the space sector are still private and off limits for the average retail investor. But it's definitely an area to keep your eyes on in the near future and it's worth mentioning that joining Mampilly's advisory service (not saying you should) also provides a watchlist of private companies that he's waiting on to go public within the next few years.

I hope this review has provided some value to you. As always, let us know what you think of these picks in the comment section below. And if you have any additional information or guesses as to what his first pick is, let us know please!