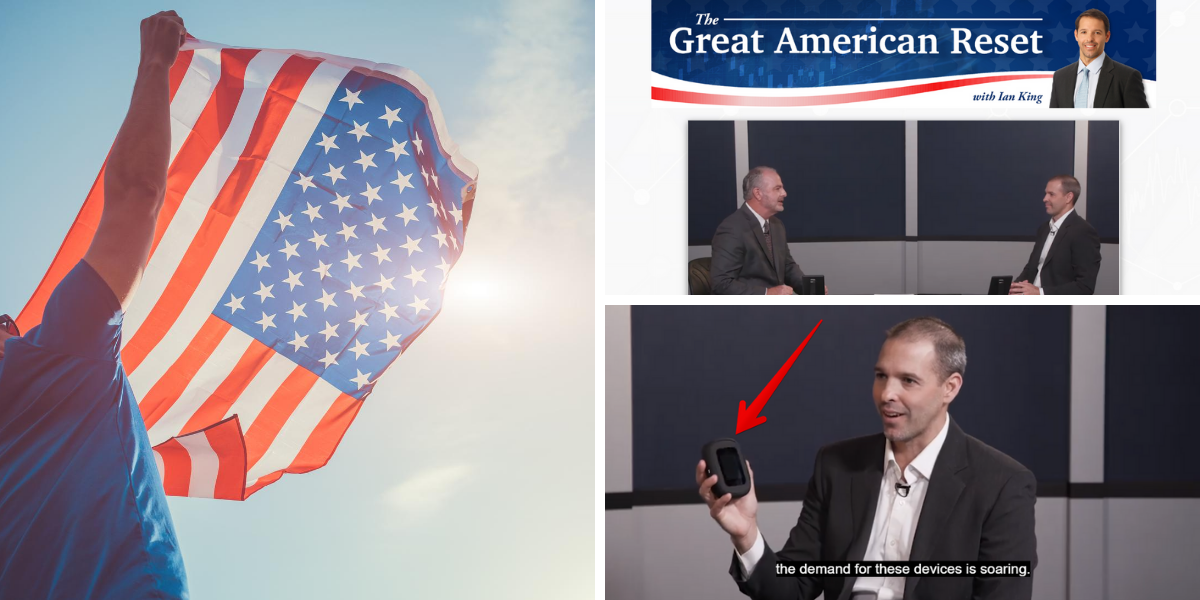 In Ian King's new presentation he talks about what he calls the "Great American Reset" and  teases the opportunity to invest in a $10 company that could lead to as much as 10x gains.

Wondering what the heck he's talking about here and what company he's teasing?

Luckily for you I'll be exposing the name and ticker symbol of his stock pick in a bit, but first let's talk about the teaser...

It's called "The Great American Reset" and the presentation consists of Jeff Yastine and Ian King going back and forth in an interview-like manner. It's set up to appear as some sort of news broadcast interview, but really both of the guys work for the Banyan Hill Publishing company, and it's actually an advertisement. 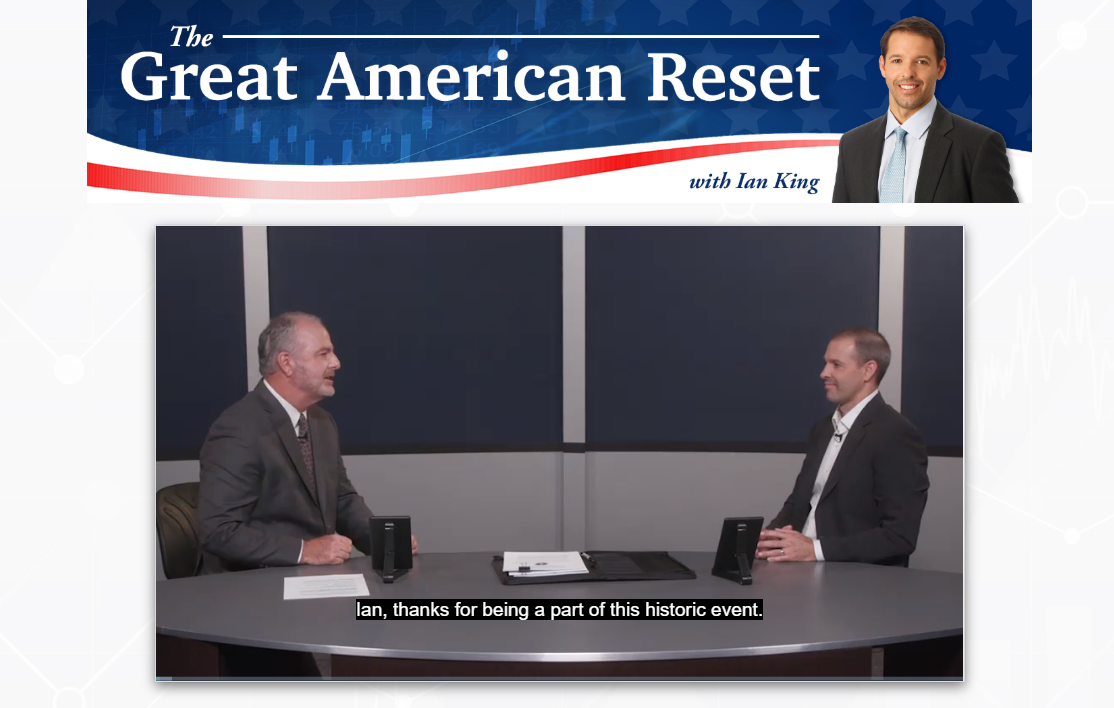 Ian King is the main focus here, so let's talk about him. His background is actually very impressive. He comes from a past of working for big banks and managing hedge funds on Wall Street, but now helps out Main Street investors through his investment newsletter services that are published through Banyan Hill. There have been past recommendations he's made that have turned into huge gains, but you still have to take what he teases with a grain of salt... he's also good at hyping the heck out of these opporutnities.

This new "Great American Reset" opportunity is one where Ian King predicts major economic growth and investment opportunities that "will be a massive windfall for every American".

Adding to this, he thinks "investors will have the opportunity to make a fortune".

But what is this "reset" he speakes of?

This is just a term he uses for it, but what he's talking about here is big economic downturns that weed out the weak companies and give room for forward-thinking, innovative companies rise to the top and propel the economy forward.

It is investing in these innovative companies that he thinks "you could triple, quadruple, or even 10X your investment" in. 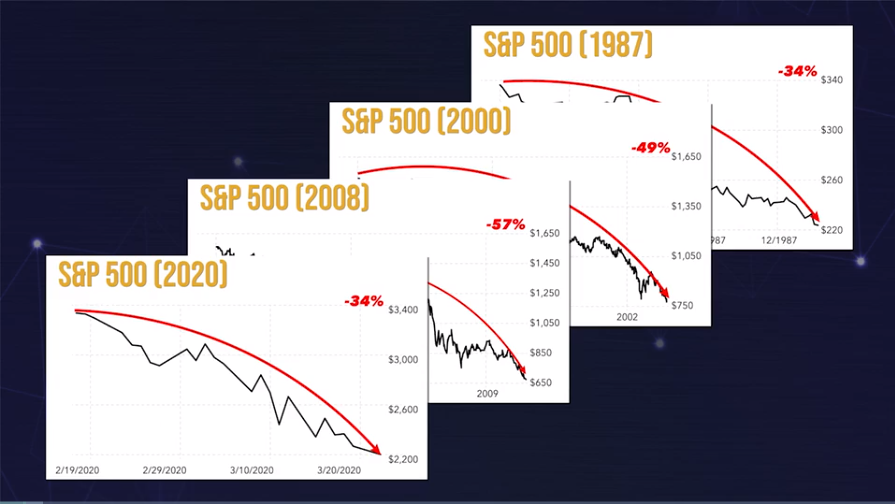 However, each time the stock market has rebounded to greater heights, much thanks to the stonger companies having more room to thrive.

Now I know the opportunity is really hyped-up here, but the core of what Ian King is saying does hold true. That said, these "resets" that weed out the weak companies are definitely NOT the sole reason for the stock market's rebounds. There are lots of variables involved.

Throughout the presentation King gives us example after example of innovative companies that have soared after these economic downturns. Half of the presentation is just him showing charts of stocks that have been big winners... all in an attempt to get you, the viewer, to start dreaming about that new sports car you've been wanting to buy so that you end up buying what he's selling (more on this in a bit).

The new technology set to propel the US economy forward..

The reason he thinks this will be the biggest reset yet is because it is "backed by a presidential order"... and what he's talking about here is Presidential Memorandum O-2518, which is focused on "spectrum" technology.

It is a company that has something to do with this "spectrum" technology that he thinks everyone should be investing in if they want to get filthy stinkin' rich... calling it a "$10 company that will give you the chance at massive profits".

We are also told that this is...

At this point I could hardly wait for the presentation to end. I just wanted to buy the darn stock so that I can go take out a loan for that new Ferrari I've been eyeing... but of course the entire presentation cumulated into a sales pitch, as normally happens...

All the information on the stock being teased here is kindly provided by Ian King in a "free report" titled The Company Leading the $12 Trillion 5G Revolution along with some other "free" reports... 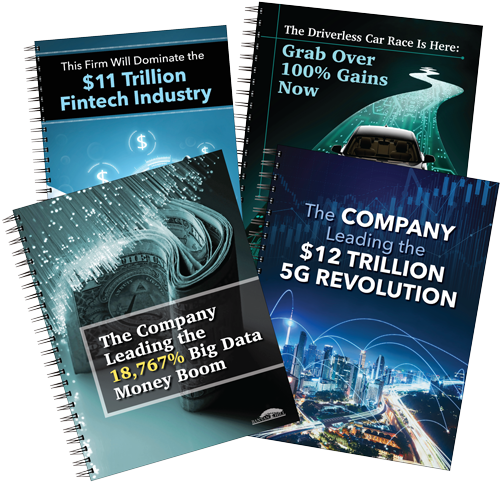 However, we all know that free doesn't really mean free anymore, and in order to get this "free" report you'll first have to subscribe to his Automatic Fortunes investment newsletter service. This will cost you $79/yr for the premium subscription that they'll push you to buy.

The good news?: You won't have to buy into this because I'll be exposing his stock pick in a second.

What Is "Spectrum" Technology?

Let's first talk about this "spectrum" technology, as Ian King calls it.

He talks about how it will give birth to every future technology, such as IoT, Blockchain, virtual reality, AI, etc., and how it is expected to grow into a $12 trillion industry... 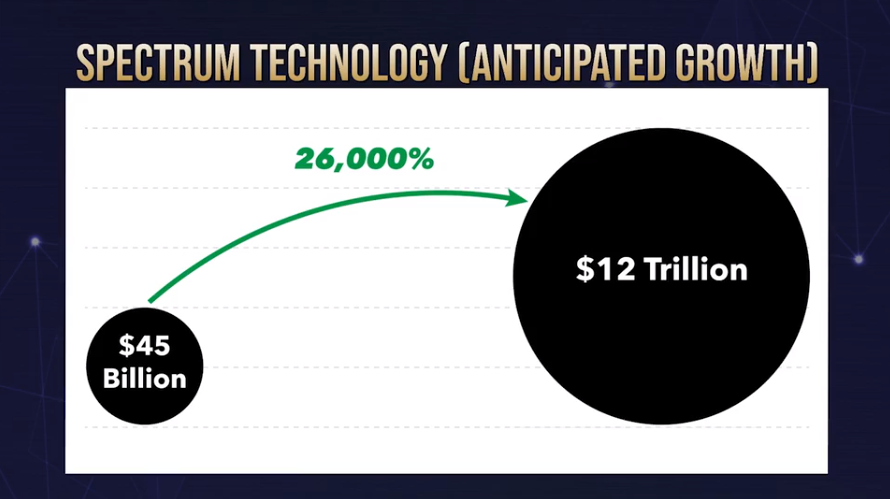 ... and if you were able to sit through the entire agonizingly long presentation, which was probably around 1 hour in length, then you know he's talking about 5G here.

"Spectrum" is nothing more than a technical term for 5G. And remember the Presidential Memorandum O-2518 that was mentioned? That was an order promoting the development of 5G tech to help push the US forward as #1 in this new industry, which is largely seen as being essential to national security among other areas.

What you need to know about 5G..

Just about everyone has already heard of this, so I'll keep it short.

5G, in short, is the 5th generation of mobile communication networks and is capable of delivering data speeds 100 times faster than that of 4G.

However, there is one pretty big problem with 5G, or I guess "complication" would be a better word to use.

The complication with this tech is that its signals don't travel far and can't pass through solid objects. While 4G signals can travel 10+ miles, 5G signals only travel about 1,000 feet, which is only a measly 2% of 4G's distance.

Sounds pretty bad. And it is bad. However, with the ability to carry more data at speeds of 100x that of 4G, 5G is still more than likely going to completely revolutionize the world, and there are companies working on all sort of solutions to this limited range complication.

This is where Ian King's 5G stock comes into play. They make devices that help solve the problem.

So, what is this "undiscovered company" that's at the "forefront of this massive shift"?

What's the name of the company that's supposedly going to make investors rich beyond their wildest dreams?

Let's take a look at some of the better clues we were given: 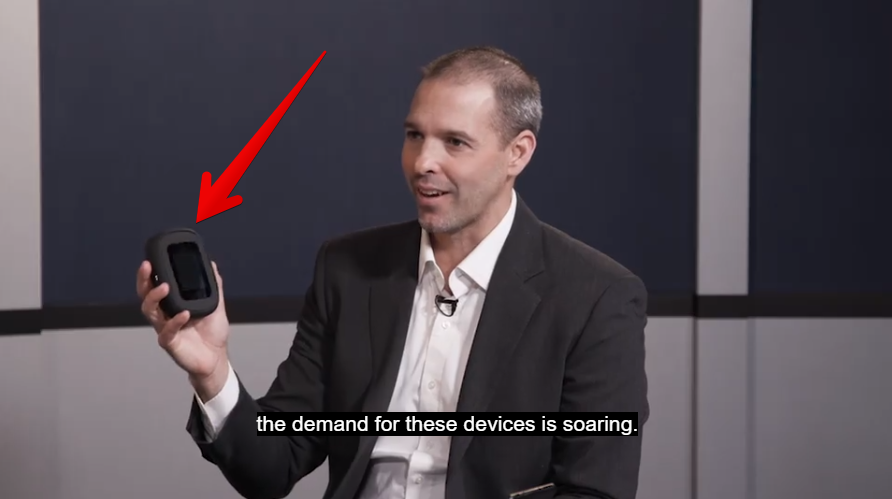 The clues here aren't all that great, but the good news is that I've been able to find the stock he's teasing, which is largely due to the fact that he actually teased this stock a while back in a teaser for spectrum technology.

Well, it's not really the "undiscovered company" he leads you to believe it is.

Inseego it is. No doubt about it.

10x Gains on Your Investment?

Now that we know the stock King is teasing here, the next big question is whether or not this stock is really all that special.

Should you dump your entire nest egg into it? Will it make you rich?

We all know that the claims in these teasers are usually exaggerated, so don't count on those 10x gains and keep your portfolio diversified.

Inseego is positioned well in the industry and does have some good partnerships that should help it out as 5G rolls out, such as the MiFi hotspots they are providing to big companies like AT&T, Verizon and Sprint, but predicting a 10x rise in stock price is really pushing it.

The truth is that Inseego isn't in a very high margin business here selling their routers and hotspots, and with time there will be other competitors coming onto the scene.

Is 10x possible? Well, don't count on it, but this is one of the most heavily teased companies at the moment. We've got George Gilder teasing it as a 15G company and David Fessler teasing it as "the next tech giant", among others. Many speculators think 10x is within range.

I hope this review has been another of value to you.

As always, let us know what you think of the stock pick in the comment section below. We like to hear what our readers think!