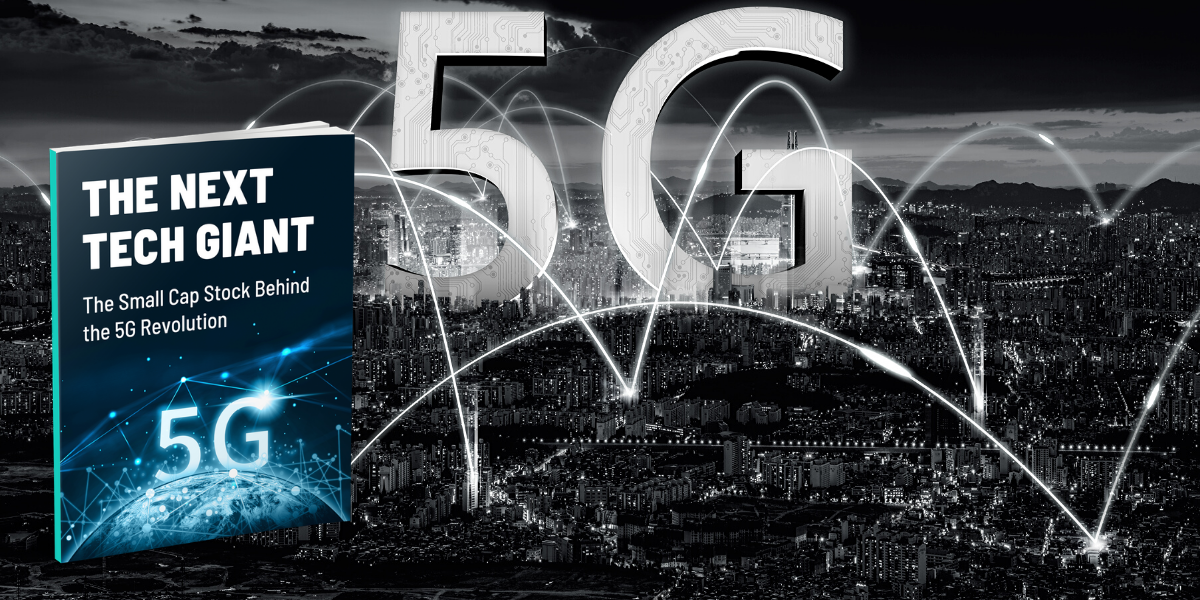 If you're wondering what David Fessler's 5G stock is, which he's been calling "The Next Tech Giant", then you're in the right place.

In this quick review I'll be going over what we're told about this 5G stock and piecing together the puzzle to expose it, including its ticker symbol.

Let's begin by talking about the teasers for this stock...

There are several teasers floating around the internet by David Fessler for his 5G stock pick, which he has called "The Next Tech Giant"... 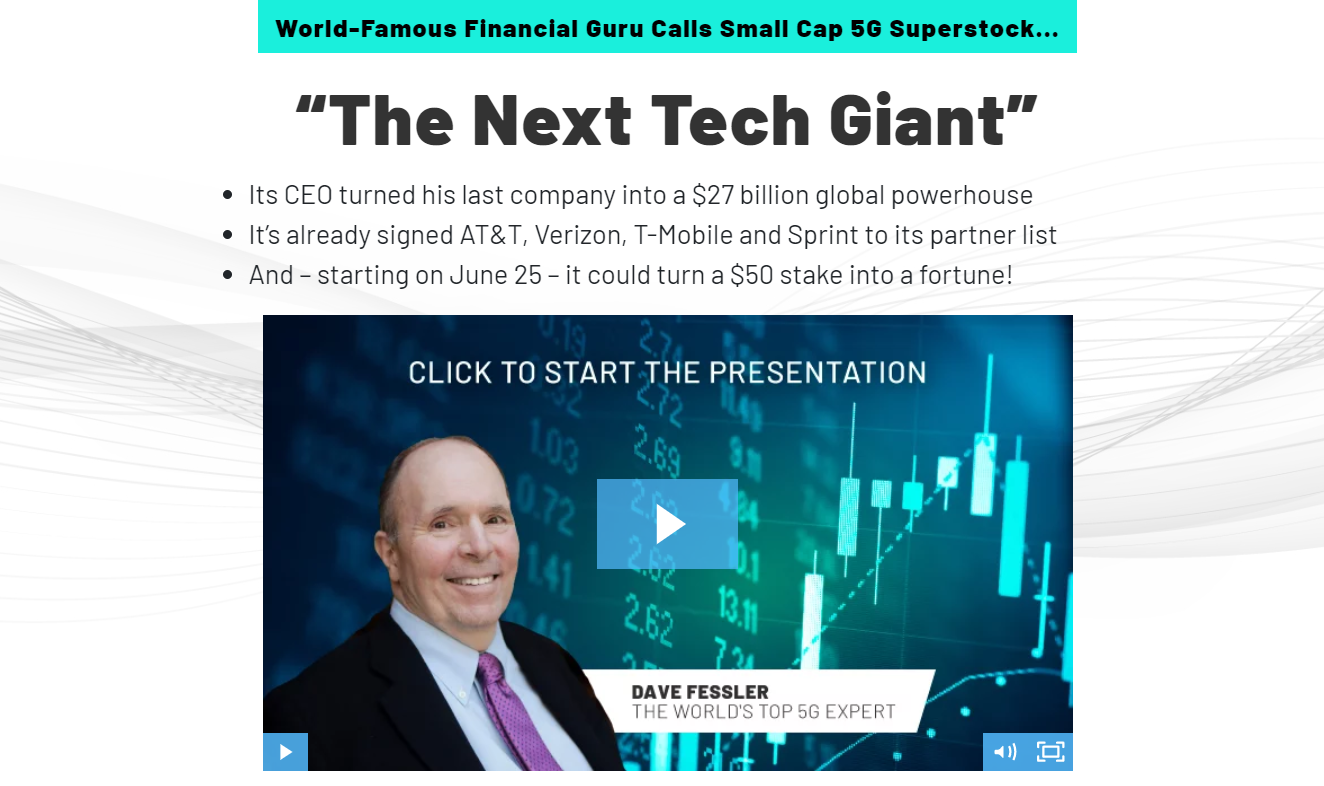 In this teaser he talks about how this one 5G company manufactures a small device, which he calls a "linchpin", that can fit in the palm of your hand, as shown... 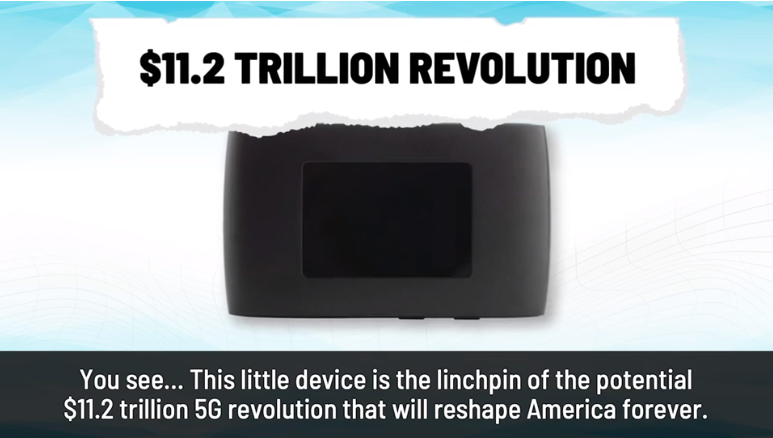 However, I also came across another teaser of his for a 5G "linchpin" device, but this one looks completely different... 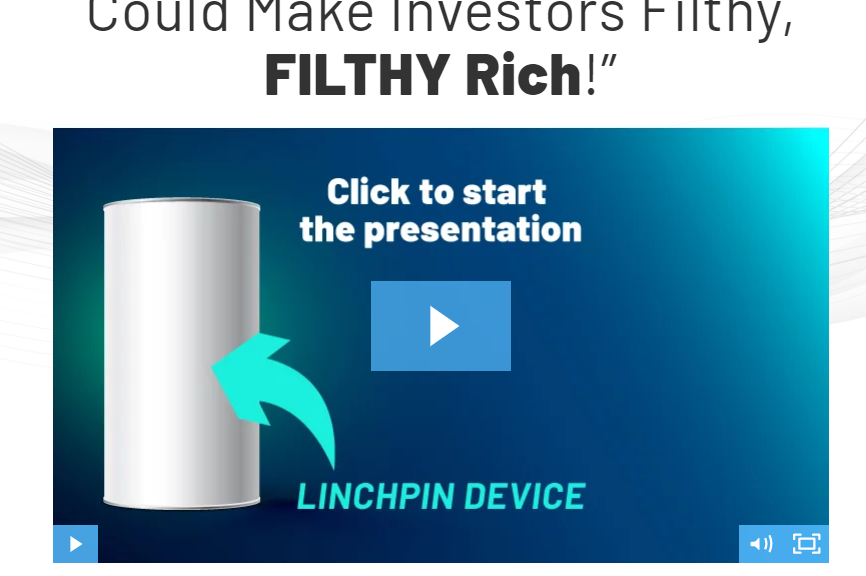 As it turns out, both of these "linchpin" devices are made by the same company. There are multiple variations of the teaser... but they all tease the same 5G stock.

Some of the claims that Fessler makes in the presentation include: 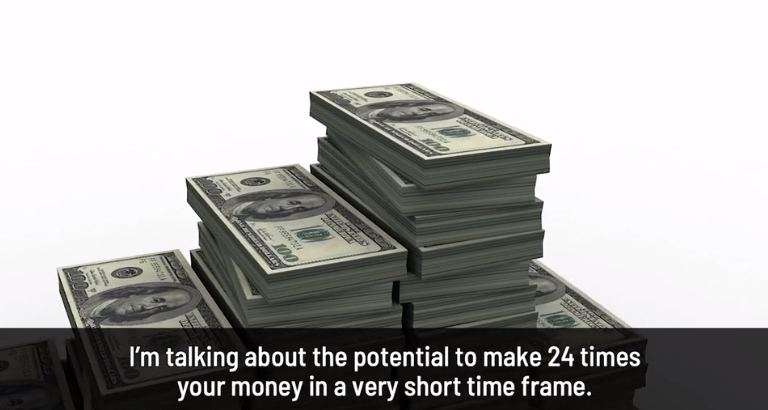 Throughout the presentation he shows a bunch of examples of stocks that have soared in price due to some sort of "linchpin" technology... and hints at this opportunity doing the same - examples like Skyworks Solutions and Akamai... 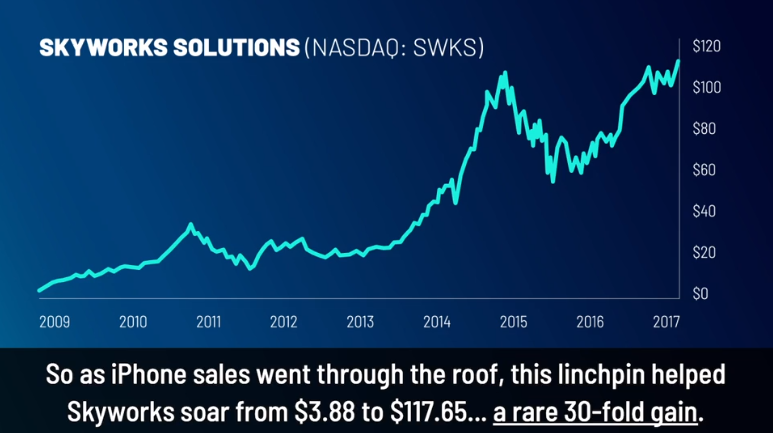 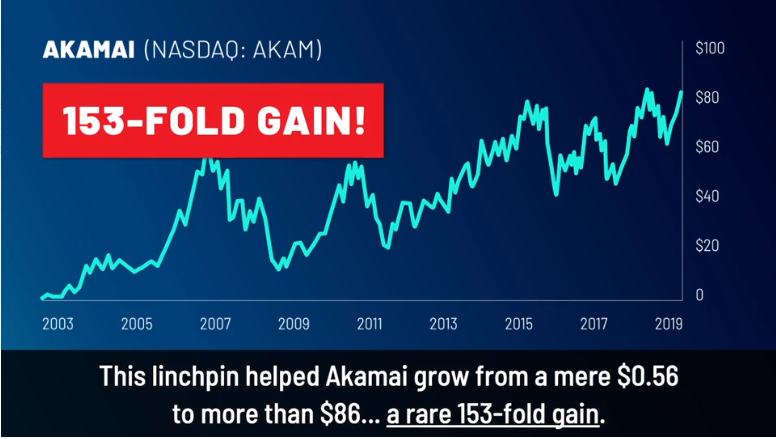 He spends half of the presentation going over examples of past stocks that have soared in price... but of course it's easy to look back and find past examples... finding them before they happen is the hard part.

But anyways... he claims to have found "THE NEXT TECH GIANT", and claims that this golden opportunity could make you filthy rich.

How do you get your hands on this stock? Well, he is giving out a "free" report called THE NEXT TECH GIANT: The Small Cap stock Behind the 5G Revolution... 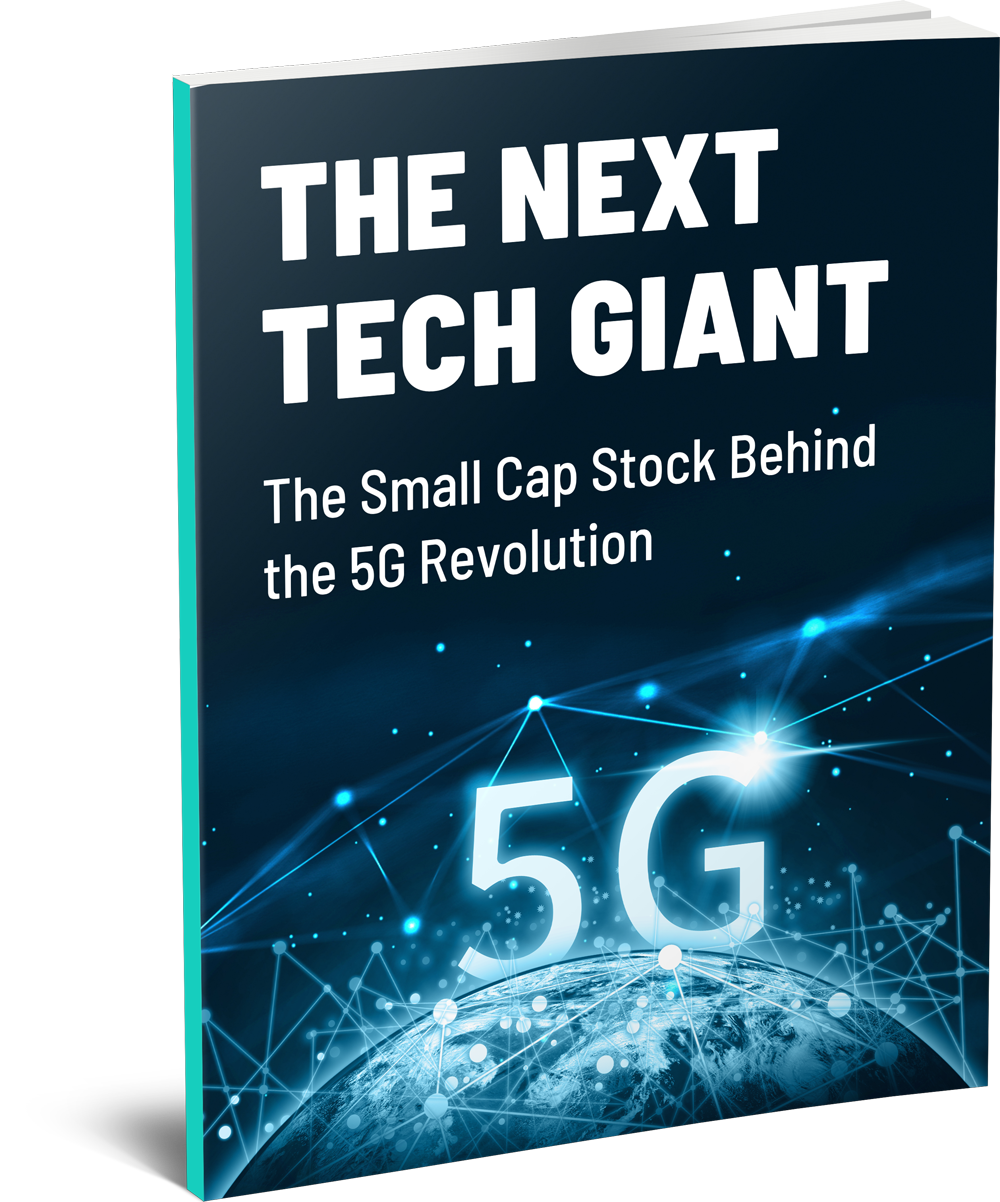 But guess what... in order to get this "free" report you first have to subscribe to his Strategic Trends Investor advisory service. This is the same trick that the Premium Income Letter used to lure in new subscribers, and the same goes for Jimmy Mengel's "Blue Gas" teaser... they all work the same.

This advisory service regularly costs $249 (so we are told) but through this particular offer you could get it for $49/yr, and what it provides are monthly newsletter issues where he provides subscribers with his latest recommendations and market trends, weekly updates on the market and portfolio holdings, access to the model portfolio to view recommendation performance and more.

The good news: You don't have to buy into this anymore just to find out. I'll be going over the stock he's teasing right now.

What Is This "Linchpin Technology"?

He uses the word "linchpin" a lot in his presentations, but what on earth is he talking about here?

Well, as he states: "A linchpin technology is the foundation of paradigm-shifting innovation."

So the term "linchpin" can be applied to anything, but in this particular case he's talking about 5G routers and hotspots, which was what he was showing pictures of in the various presentations.

Are these really "linchpin" technologies?

You could easily categorize them as such. One of the big problems that 5G has is that its signals can't pass through solid objects, such as walls, doors, and even windows. The solution is to simply put hotspots and routers just about everywhere.

There are other solutions, such as the "strip antennas" that are being made, but small routers and hotspots will likely be a huge deal in the coming months and years as 5G is rolled out.

Who Is David Fessler? 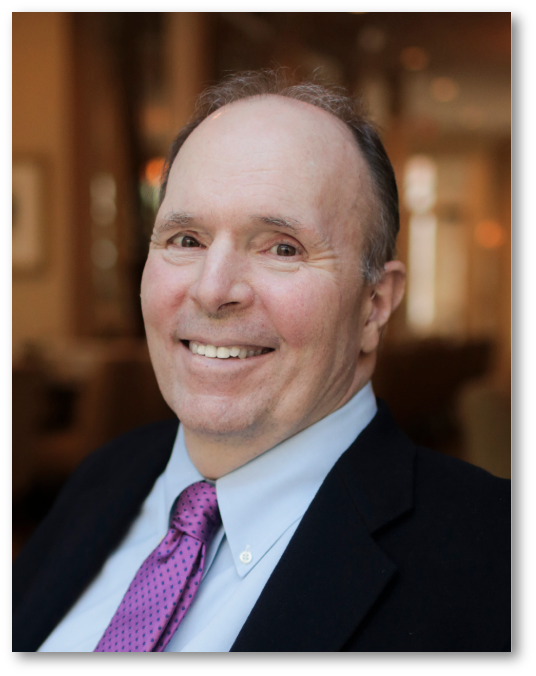 Fessler has a degree in electrical engineering and worked in the telecom industry for quite some time, where he was VP of sales at LTX , which is now called Xcerra Corporation and is a semiconductor Automatic Test Equipment vendor that sells to big companies like AT&T.

His background also includes designing automated systems for Silicon Valley, systems that are now used by Apple, Amazon, and even the DOD.

He talks about how his company manufactured a "linchpin technology" of its own, which he bought shares of at the time and claims to have made some good money from the whole thing. This new opportunity supposedly reminds him of it, only a lot better.

He retired from his old line of word at 47 and now is employed by The Oxford Club, which is an investment advisory firm that publishes investment newsletters, of which Fessler edits a couple - Strategic Trends Investor & Profit Trends.

Over the years he has made some very good recommendations to his subscribers, some of his better ones including Tesla in 2013, Skyworks Solutions in 2018, and Nvidida in 2016... but this doesn't reflect the overall performance.

"The Next Tech Giant" Stock EXPOSED

So what the heck is this stock, which is also referred to as the "#1 5G superstock"?

Let's take a look at some of the clues we were given...

And this is all the information we need. This is something I'm already familiar with, so not much information is needed.

What's the stock being teased?

Dun, dun, dun, dun.... It's Inseego (INSG), which is a tech manufacturer that makes 5G hotspots and routers, among other things. 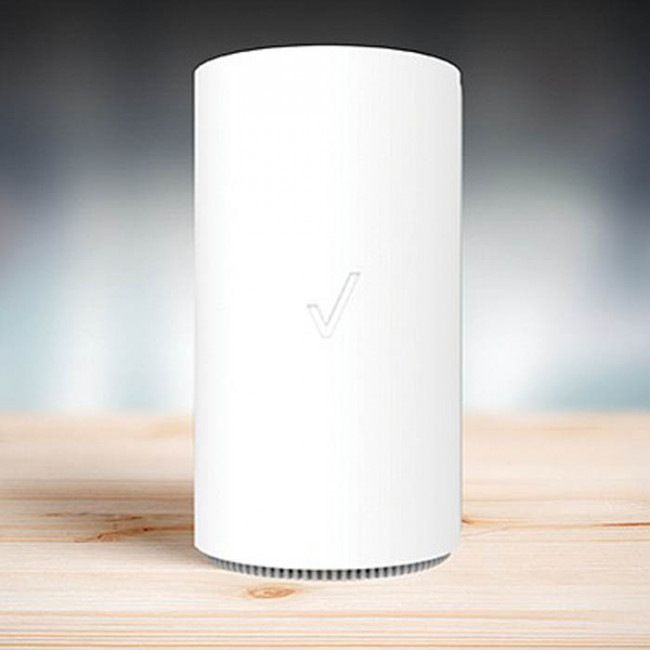 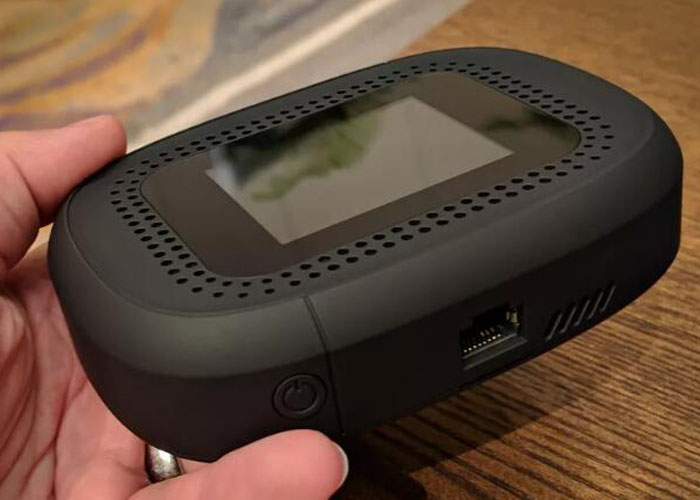 And yes, Inseego has contracts with AT&T, Verizon, Sprint, T-Mobile - and has a partnerships with Ericsson and Qualcomm

Inseego (INSG) it is.

All of the clues point here.

So now we know what the David Fessler's 5G stock is, but is it really that great? Will you really be able to make 24-fold gains as he tells us?

Well, as you can probably imagine, a lot of the hype in the promotional material is over-the-top and exaggerated. You can't always trust what you hear in marketing material like this.

Saying that this company is going to increase 24x is largely based on speculation. A 12-month stock price forecast by analysts at CNN Business don't see the price going anywhere close to that over the next year. That said, professional analysts almost never predict surges in price like this... but they do happen.

Could Inseego be next? Who knows... but I certainly wouldn't count on 24x gains if you do invest!

And there you have it! You're welcome!

Hopefully this quick review has helped you out and provided some value. Share this post to help spread the word and have a great day!

Also let me know in the comment section what you think about this "next tech giant".