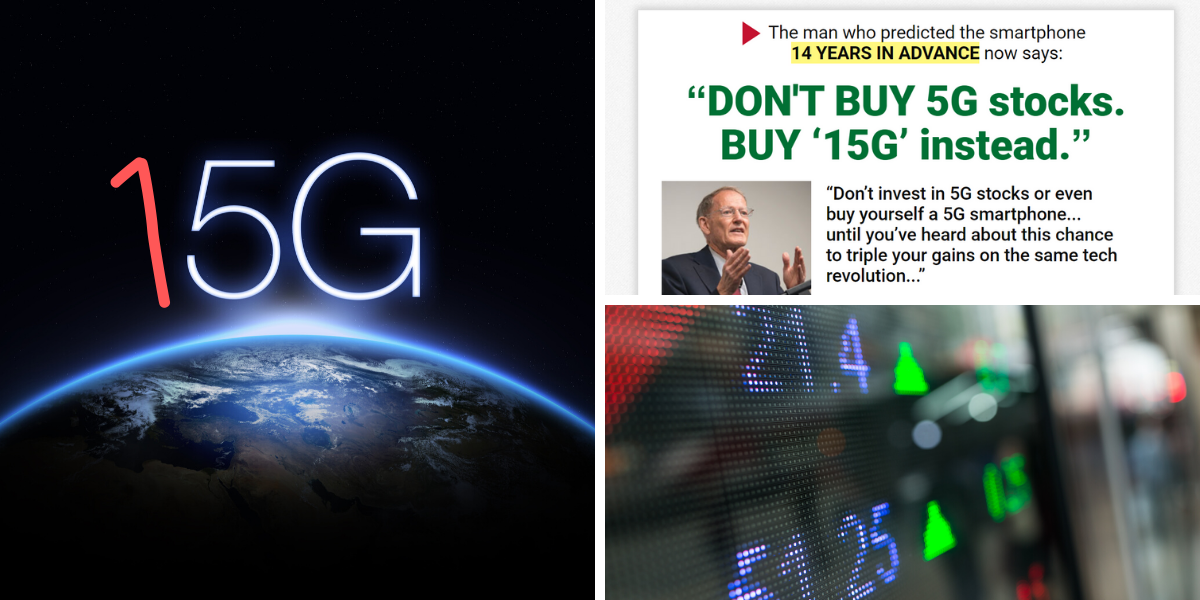 If you're wondering what George Gilder's "15G" stocks are then you're in the right place.

He's been teasing these stocks these stocks a lot lately, with claims many of could hand investors over 1,000% gains and that they are 3x as good as 5G stocks.

Let's start out this review by going over the teaser and some of the claims made...

I think there might be more than one teaser out there for this, but what I came across was an interview-like presentation between George Gilder and Doug Hill, titled "Don't Buy 5G stocks. Buy '15G' Instead"... 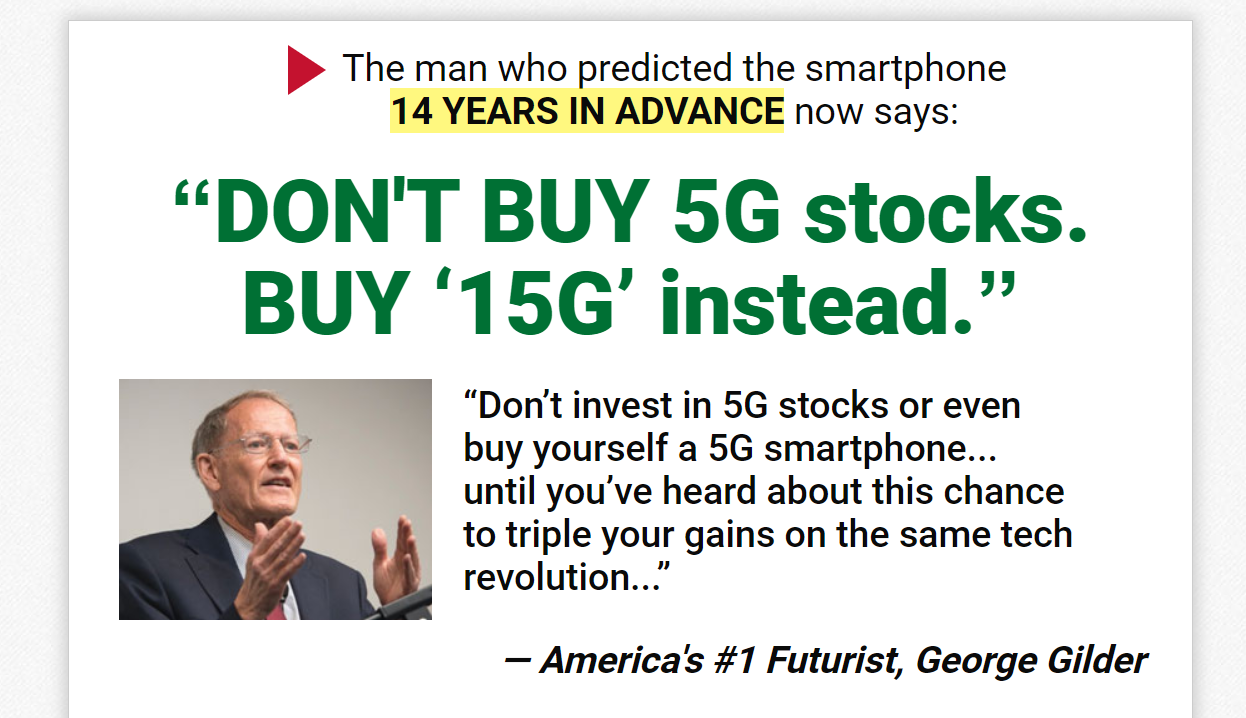 George Gilder the guy behind it all. He's an investor, economist, a techno-utopian advoctate, and of course newsletter editor for his Gilder Press company (part of Agora). He likes his tech, and he's always making big predictions for the future of the tech world. Many of his wild predictions come with a bit of controversy, but this is one of the reasons people like to hear what he has to say, and some of his predictions have been surprisingly accurate. Recently he's been teasing a complete "reboot" of the internet (that we already exposed), and now it's all about this "15G" technology.

In the teaser he talks about 5G but claims that if you want to really get wealthy, then you won't buy stocks in this area. It's all about "15G", which he claims "could be the real shortcut to wealth in this tech revolution".

He goes on to mention that there are six "15G" stock opportunities he's very bullish on - most of which he things could bring in 1,000% gains or more for investors.

He claims that no one is talking about these "15G" companies.

These companies are supposedly bringing us "breakthrough tech" that is "on the fringes of this revolution", yet their stocks trade for cheap because no one really knows about them.

Gilder claims that these "15G" stocks have "plenty of room to move" and should soar "as much as three times higher or more".

Also, we supposedly "could make at least three times what most regular investors might make".

Why would you want to make normal 5G returns when you could make 3x that?

Lot's of hype here, as usual.

The presentation drags on for what seems like all of eternity, and through it Gilder shows us a bunch of charts of 5G stocks that have soared recently and reinforces the idea that 15G stocks could bring 3x those amounts of gains.

At this point most readers are salivating at the idea of turning a few thousands bucks into a pile of millions.

Look George, we get it... we'd be really rich if we had invested early in Microsoft, Neflix and Apple... can you get to the point here!?

How do you get in on these "15G" investments?

Well, as mentioned, he's teasing 6 different companies he thinks everyone should be investing in. But it's not free.

All of the information on these six 15G companies is included in his "15G  Unleased" report, which he tells us that we can have a "free copy" of... 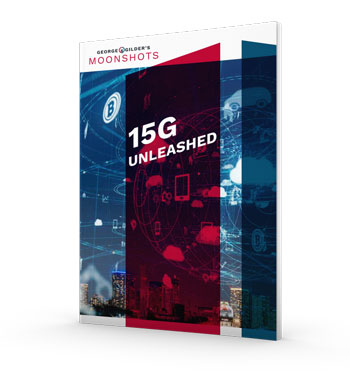 But in the world of investment newsletter services, "free" is never free... and in order to get your hands on that "free copy" you will first have to take out that credit card of yours and buy into his newsletter serivce, called Gilder's Moonshots. This will cost you $2,500... and that's supposedly with a bunch of big discounts.

*Note: Be warned that there are no refunds offered on this.

15G is nothing more than something Gilder made-up for marketing purposes. 15 is bigger than 5, and so it sounds like some brand-new tech that is going to take the world by storm.

15 is 3x bigger than 5, and he thinks that the stocks he's chosen are going to provide investors with at least 3x more than investing in regular 5G stocks... and this is why he calls them "15G" stocks.

As he stated, these stock could go "as much as three times higher or more".

However, they are just 5G stocks.

There are 6 of them that he teases, all of which he thinks could provide 1,000%+ returns.

The 15G Stock Being Teased

Below I'll be going over some of the clues we were given on each stock and what the pick likely is...

So what are these "nodes" that Gilder is talking about? Well, it sounds like he's talking about WIFI hotspots, and Inseego (INSG) is the likely pick here.

Inseego, makes hotspots and routers that can handle 5G, and yes, they make small hotspots you can carry around (their "MIFI" devices). Not only do they have deals with the companies mentioned, but they also have been making a big deal of shipping out "over 32 million devices"... 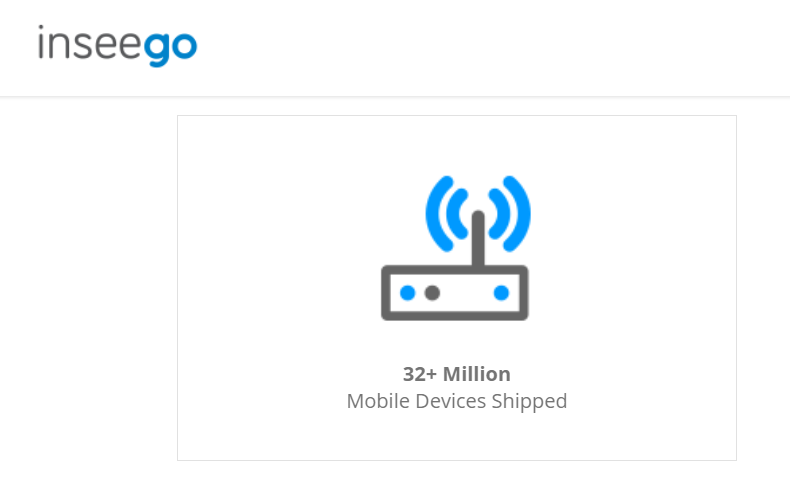 But don't expect to get in for $6 a share anymore. The teaser is a bit old and prices have been pushed up.

#2: The “15G” Sensor Company That Builds “Brains” for Self-Driving Cars

At first sounded like it could be Nvidia, but George actually mentions Nvidia later in the teaser, so that's off the table. Not only that, but there is a lot of talk about this second company licensing like crazy.

Readers have hinted at this pick being Ceva (CEVA), and it seems that it probably is. They have deals with the companies mentioned above and it was also mentioned that the company is around 22x smaller than Aptive, which also matches up pretty accurately.

Ceva has sensor fusion technology that transforms movement into data usable in applications, with their MotionEngineTM sensor fusion software being used all over.

The clues match up well, but I wouldn't way this stock is "dirt cheap".

Well this would have been a lot tougher without the share price hint.

The likley pick here seems to be A10 Networks (ATEN).

A10 is an ADC (application delivery controller) company that offers cloud security as well as "Automated Threat Intelligence" and "Advanced Secure Application Delivery" solutions". Their partners do indeed include Microsoft, Symantec and Ericsson among many others.

The stock has been in the "just under $8" range for years - popped up above it around the beginning of 2017 but has since went back down.

These last three picks were just kinda blown over in the teaser. Not many clues were given, and so if I were to start guessing things might take the wrong turn.

*Did you get Gilder's report? Then let us know what these stocks are below. We'll be forever grateful!

Gilder's first pick, Inseego, has actually been teased quite a lot by other newsletter publishers. This is actually Ian King's "Spectrum" stock pick and it's the stock David Fessler has been calling "The Next Tech Giant". However, in the other teasers it was teased as just a normal 5G stock. Gilder thinks it's a 15G one.

As always, you have to take what you hear in these teasers to be at least somewhat misleading... because it almost always is. However, Inseego is a company people have a lot of faith in... but then again no one really knows how their MIFI units will fair in the market... and there is bound to be lots of competition here.

The other 15G picks I'm fairly sure on, Ceva and A10, are both more "under the radar" picks. Liscencing and royalty companies are sometimes the way to go. High margin businesses can be nice investments, and Ceva has good cash flow. And A10 is also worth a look. Recently upgraded to a "strong buy" by Zacks, A10's earning estimates are increasing and it's still a small company without almost any analyst coverage.

Now will these companies give you 1,000% gains in not long and make that private jet affordable so that you can take trips to that new beachfront home twice a year? Don't count on that... but they are all worth a look at the very least, and I thank George Gilder for alerting us to them.

I hope this short review has helped!

Please, let us know what you think of these picks down below in the comments section. And be sure to alert us to some of the picks we couldn't reveal if you have any additional information on them!