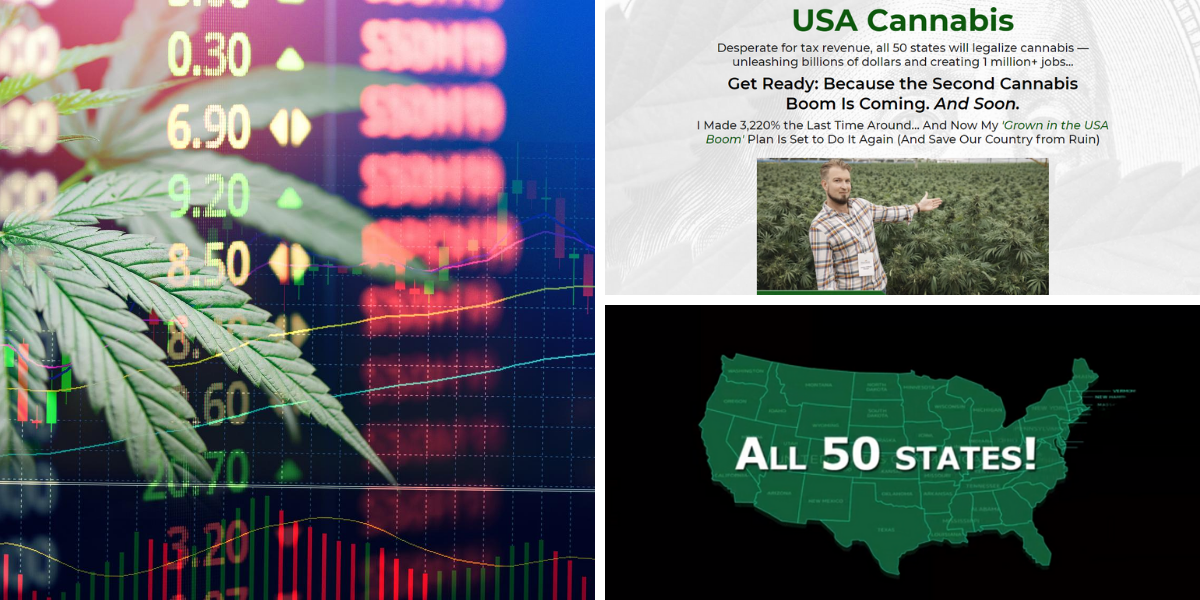 Jimmy Mengel from over at the Outsider Club has been teasing the opportunity to invest in "USA Cannabis". He thinks that all 50 states could legalize cannabis in the very near future, and now is the time to get in on it.

He teases on specific stock that he thinks will make investors rich... as much as 20x rich is what he's predicting.

What's going on here and what's the stock being teased? This is what we'll be discussing in this short review.

Let's begin by going over the teaser.

"Get Ready: Because the Second Cannabis Boom is Coming. And Soon". This is the presentation I came across, although there are surely others out there... 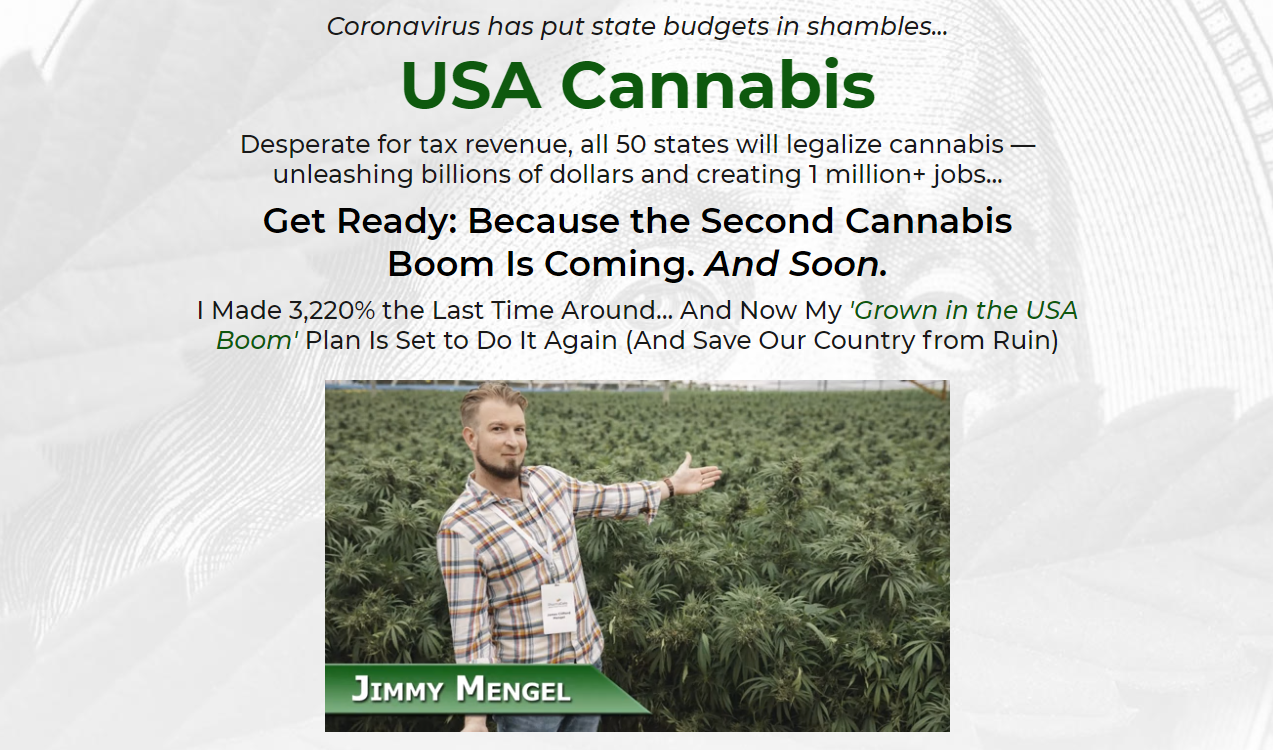 Jimmy Mengel, as just mentioned, is the guy behind it all and is also behind the popular "blue gas" investment teaser. He doesn't come from some spectacular Wall Street background or anything like that, but has made a name for himself in the financial world, which is why CNBC and other media outlets often pick his brain every now and again. His main job at the moment seems to be working for the Outsider Club, where he runs investment newsletter services, often traveling all over to get frontline information on companies before recommending them.Mengel was heavily involved in investing back during the 2018 cannabis boom and has also able to profit big from the legalization of cannabis in Canada, Colombia, and California. Now he thinks "cannabis could be legal in all 50 states in just a few short months from now".

How much time do we have to get in?

Well, he claims "this is your last chance to get in while you still can".

Sounds urgent... but then again... these teasers always do.

Mengel claims to have "found the perfect, all-American boom stock", and it is this that investors will be able to make a fortune from... so we are told.

That's right, Mengel claims to have found the company leading the way... a small company that he says isn't too small, and is run by a seriously motivated US Army veteran.

Throughout the presentation, as normally happens, we were told all about the good investments he (Mengel) has made over the years.

He went on to tell us that if we had followed his recommendations on the first cannabis boom, we could have made off with 3,220% gains on Canopy Growth Corporation and 6,092% on Cronos Group... 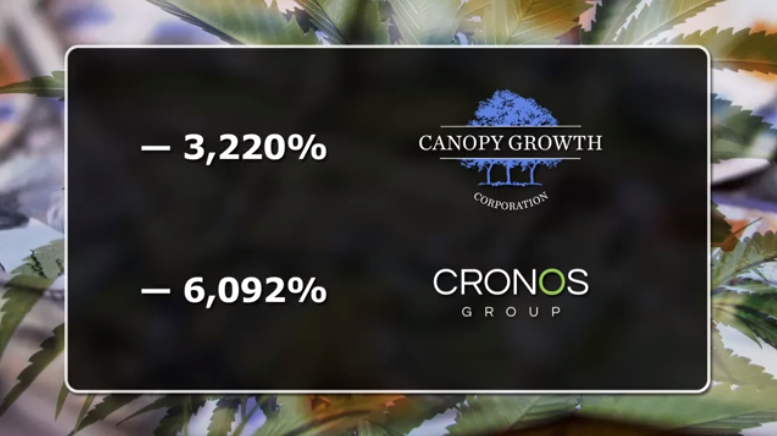 He talks about his Cronos investment about a half-dozen times throughout the presentation, really hyping up the opporutnity here more and more.

But what about after the crash? Let's not forget the bubble that formed and the bursting of it... which led to a lot of people losing a lot of money.

Well, he's predicting 20x growth on this company and even claims this is a conservative prediction.

Thank goodness... because I'm going to need more like 30x to afford that new yacht.

But, now how do you get in on this chance to 20x your money? Well, of course it ends in the typical sales pitch...

Jimmy Mengel is giving away a special report called The Boom Stock That Will Transform America’s Cannabis Production, and in this report he provides all the details on the company he's teasing...

The kicker is that you have to buy into his newsletter service called The Crows Nest in order to get yourself a copy. This costs $99/yr and provides members with investment recommendations on a monthly basis and more.

Will cannabis really be legalized in all 50 states soon? 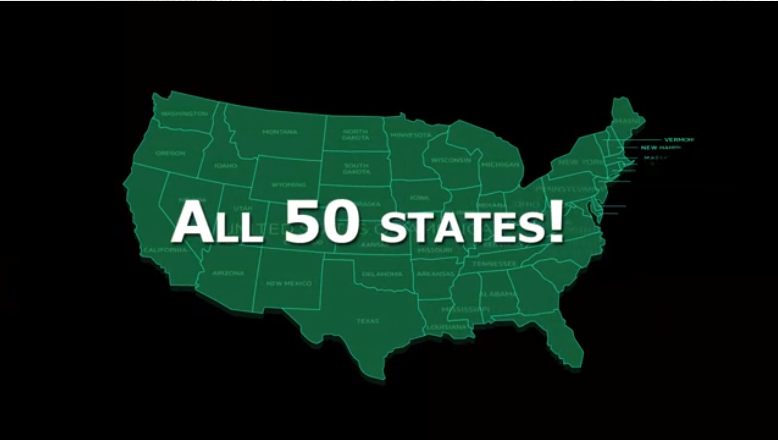 Mengel talks about how COVID will help push this forward.

Governments are hurting for tax revenue more than ever right now, and taxing cannabis sales is an easy way to bring in more. It could create billions of dollars in tax revenue and over a million+ jobs, so we are told.

But don't get too excited now Uncle Sam. The tax windfalls that were predicted after legalization in states like California have fallen short by a long shot. Not only that, but the taxes on recreational marijuana are what you call "sin taxes", similar to those on alcohol and tabacco in which the products are taxed high, which discourages users, but at the same time the taxes are depended on by the government... not really a very reliable means of taxation.

All this considered, and even though the taxation on cannabis doesn't appear to be quite as great of a revenue stream as predicted, it's still nonetheless another way for the goverments to bring in money... and there are economists and weed advocates out there predicting that COVID will help push forward legislation for legalization as Mengel does, which let's remember has already been moving forward before the whole viral outbreak.

Public sentiment towards legalization has become increasingly positive. In fact, a study from 2019 by Pew Research Center showed that only about 32% of US adults oppose legalization, whereas this number was 52% back in 2010. Not only that, but with other countries already fully legalizing the plant for recreational use, it seems that it's only a matter of time before the US follows suite.

Full-blown legalization is definitely a possiblity and seems like a probability whether you like it or not. However let's not get too far ahead of ourselves here... it's still just speculation at this point and certainly no guarantee.

So, what is the company that Mengel believes is going to be at the forefront of the second cannabis boom?

What's the ticker for the stock he's predicting will bring in 20x returns and allow you to buy that new beachfront vacation home?

Here are the clues we were given...

So what's the company being teased?

This is usually the part where I match up the clues and give you the name and ticker symbol. However, unfortunately this is one I haven't been able to figure it out yet. Through my research I've thought I had the match several times but there has always been a clue that doesn't match up quite good enough.

Do you know the cannabis company being led by an Army vet that Mengel is teasing here? Let us know in the comment section below this post!

Well, I wish I could have provided more value here and exposed the company Mengel is teasing.

If I do come across any additional information I will be sure to update this post to let everyone know.

Take care, and be sure to let us know your thoughts in the comment section below...