Paul Mampilly’s Blockchain Stock Exposed! – The “Stock of the Century” 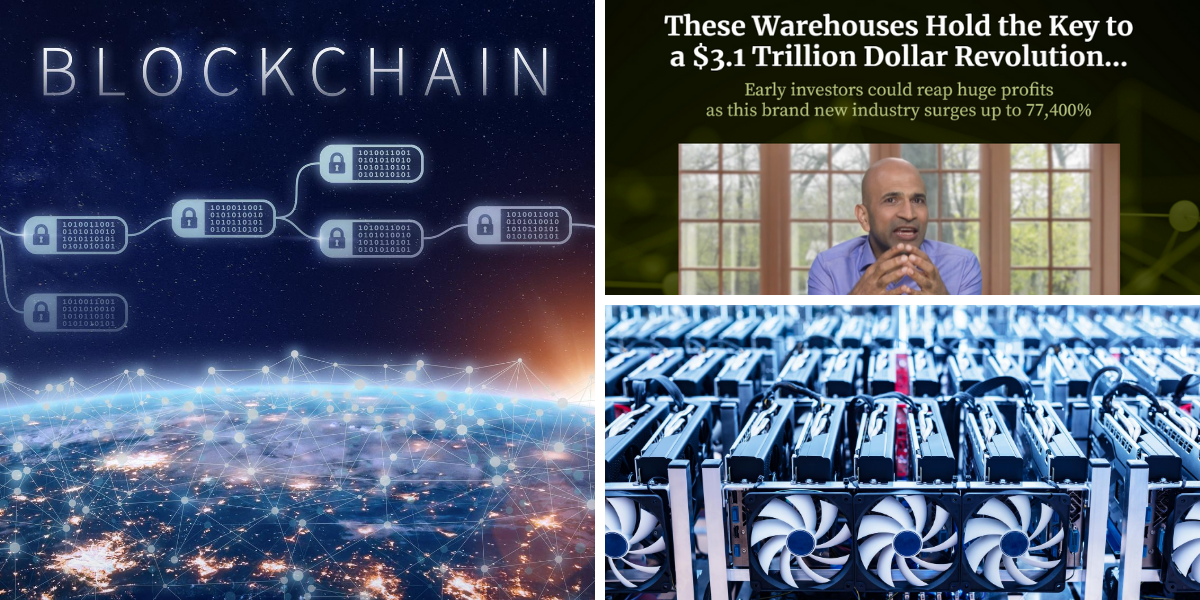 Paul Mampilly's blockchain stock is one that he thinks could make early investors very wealthy, and he's even calling it the "stock of the century".

But what is this elusive stock? Well, if you're looking for the name and ticker symbol then you are in the right place.

In this short review I'll be piecing togther the clues and exposing Mampilly's stock of the century once and for all.

There might be multiple teasers floating around the internet for this, but what I came across was for some warehouses that supposedly "hold the key to a $3.1 trillion dollar revolution"... 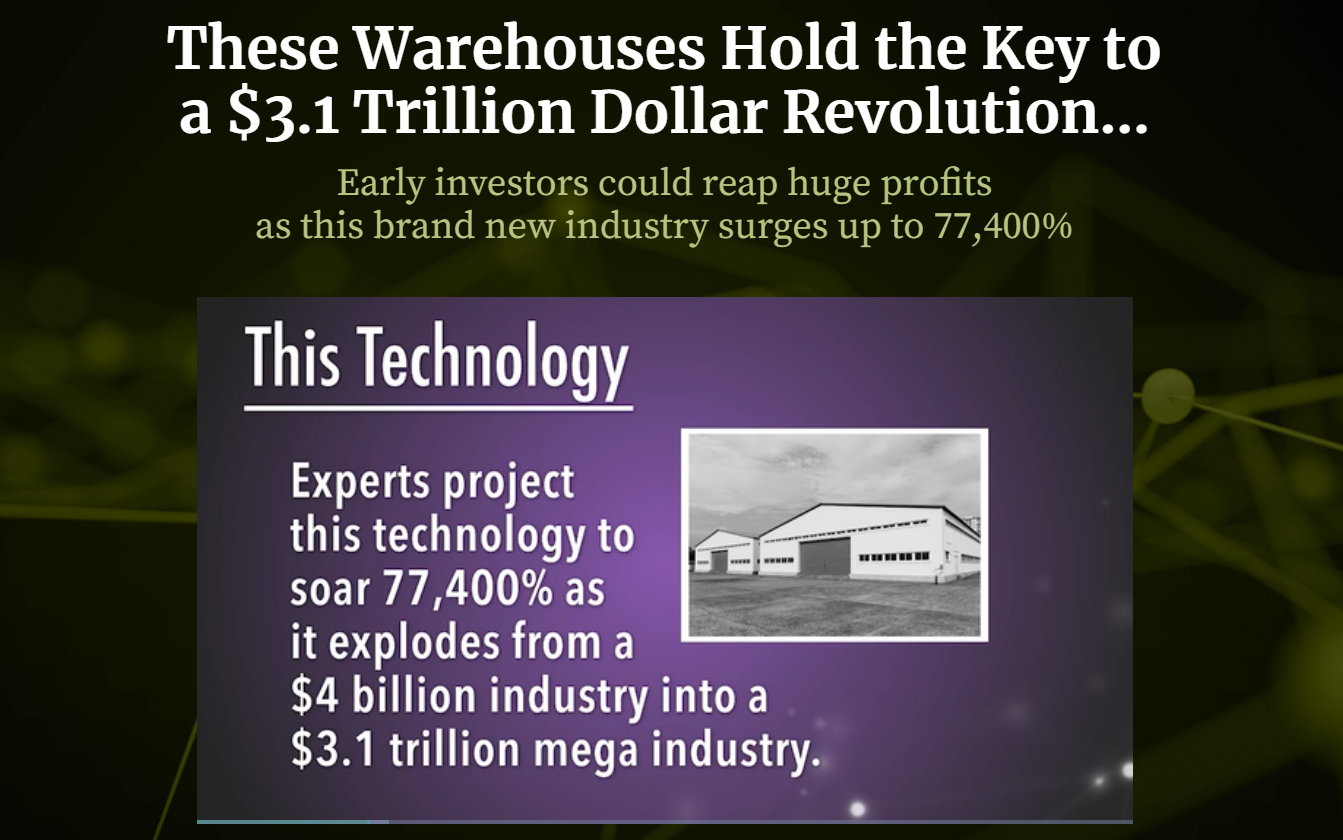 Paul Mampilly is the guy behind things here. Although he throws one heck of a sales pitch and can come-off as somewhat of a con-artist, his background is very impressive and he knows what he's doing when it comes to investing. Mampilly comes from a background on Wall Street. He has managed multi-billion dollar hedge funds and even won an investment competition back during the 2008 recession with an impressive return. But you just have to take what he says with a giant grain of rock salt, that's all. He's also the guy behind teasers such as that for "America 2.0" and the "Rebound Profit Summit".

For this teaser Mampilly talks about how the opportunity at our feet today is bigger than any other opportunity he's every seen during his 3-decade career on Wall Street.

He goes on to talk about something being developed in some warehouses that "holds the key to a technological revolution that is about to transform the global economy".

We are told that this "little known technology" is expected to soar 77,400% and that "early investors have a once-in-a-lifetime chance to become extremely rich, extremely quick" - quite a bold claim.

Did he just say we can get rich quick? You bet he did. And what's more is that he claims you can get started with just $10!

At this point I was daydreaming of traveling the world with my new-found riches... and after about a half hour he finally got around to telling us what the technology is that he's talking about, which is blockchain of course. 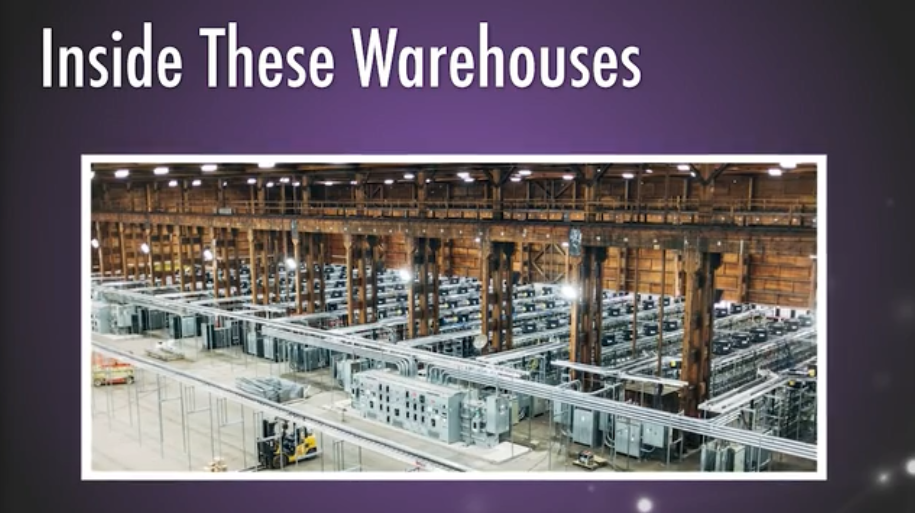 Mampilly goes on to talk about how this new revolution is similar to that of the rise of computers, the internet, and online shopping... and supposedly he has "identified the one company at the center of it all".

According to him, "this company's microchip is essential to the success of blockchain technology".

Some more hype from the teaser includes that investing in this company could be better than investing in Amazon and Intel back during the early days or even "could be like scooping up Microsoft in March of 1986", which has brought early investors gains of over 80,000%... 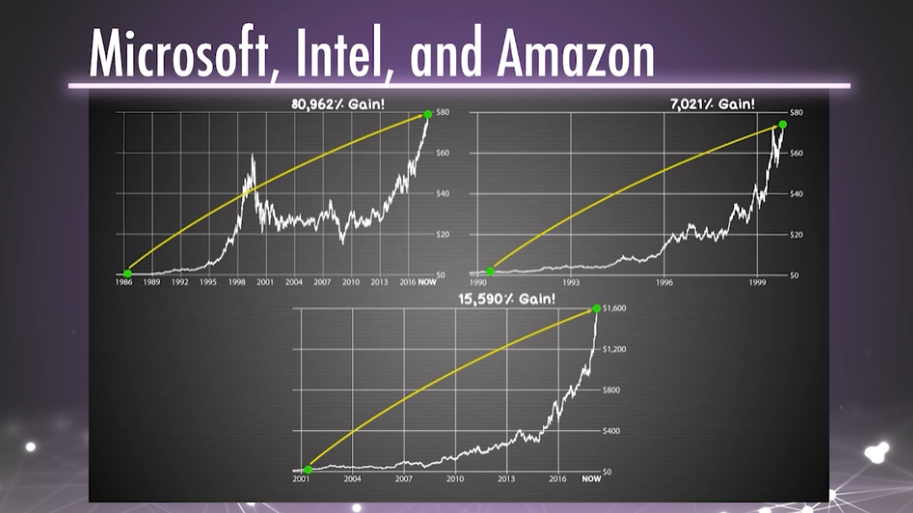 And in typical get-rich-quick style, Mampilly finishes things off talking about how investing here will allow you to take that dream vacation around the world, buy "that home you've always dreamed of", and even set your children up for life.

And right on queue, "the time to take action is now".

Fortunately for us, Mampilly is extremely generous and is giving away an "absolutely free" report that details everything there is on the company he's teasing. It's called Blockchain Fortunes: The Company at the Cusp of a 77,400% Windfall... 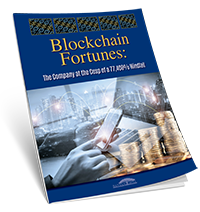 Such a nice guy.

You only have to pay $97 to subscribe to his Profits Unlimited newsletter service, which he claims is a massive discount and is the price it costs his company to produce it.

But wait a minute!

This isn't "free"! And why would they be selling subscriptions without making any profit?

*Warning: If you join Profits Unlimited through this sales funnel you will also be signed up for a 3-month trial of Alpha Investor Report. This is a tricky way they have of getting people to sign up for as many subscriptions as possible.

We've all heard about blockchain by now. Bitcoin first made it popular, but the applications of this new tech are endless.

Blockchain, in a nutshell, is just a secure way to store information across a decentralized network of computers, as explained here...

It could be used for everything from sharing medical data, to cross-border payments, to personal identity security, voting, and much more.

There are already companies pouring billions of dollars into this tech, and according to Statistica the global spending in 2023 is expected to reach over $14 billion.

It's going to be big... and Mampilly thinks investing in just one company behind this new tech will make people filthy stinkin' rich.

Let's expose that company now, shall we?...

Mampilly's Stock of the Century Brought to Light

In order to figure out what this stock is, let's take a look at some of the better clues that were provided in the teaser:

Now the teaser is outdated, so I wouldn't count on the stock still being around $10, but the other clues are still good.

Any guesses as to what the company is?

It's Advanced Micro Devices (AMD) that he's teasing. AMD is in the semiconductor business and makes flash memories, GPUs, motherboard chip sets and more. They are probably most well known for processors in PC's. 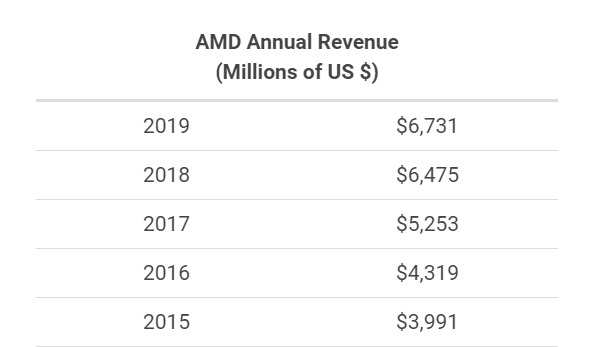 AMD is Mampilly's blockchain stock, but is it really that great of a pick?

Will You Really Get Rich Quick

First off, AMD's stock isn't even close to $10 anymore. Mampilly's teaser is so outdated, but I guess it's still working and luring in unsuspecting individuals or else Banyan Hill wouldn't be running it anymore.

So right off the bat the opportunity isn't quite as good as was teased. Not only that, but AMD certainly isn't exclusively a "blockchain stock", as the teaser might lead one to believe. Yes, they make computer hardware that is used to keep blockchain systems up and running, but their customer base is much more than just this. In fact, AMD is one of the companies being teased by Jeff Brown as an "AI Accelerator". AI, IoT, blockchain, etc... their products have many uses.

So, it's not a pure blockchain play, but that's not a bad thing at all. However, it's worth nothing that Wall Street analysts' 12-month predictions aren't anything to write home about... not very impressive at all. But then again, Wall Street analysts don't speculate like Mampilly does.

AMD is certainly a solid company and is one of the best in the industry, right up there with Nvidia and Intel, but do you really "have a once-in-a-lifetime chance to become extremely rich, extremely quick", as Mampilly puts it?

Don't count on that.

AMD has competition. Is "this company's microchip is essential to the success of blockchain technology"? Well, not really because other companies like Nvidia also make much of the same microchips that can, and are, used for blockchain systems. Mampilly acts as if this company exclusively makes this blockchain tech, but this simply IS NOT TRUE.

You are welcome, valued reader.

I hope this review has provided some value to you and lived up to your expectations.

As always, let us know what you think of this stock pick in the comment section below? Will you be scooping up any shares?