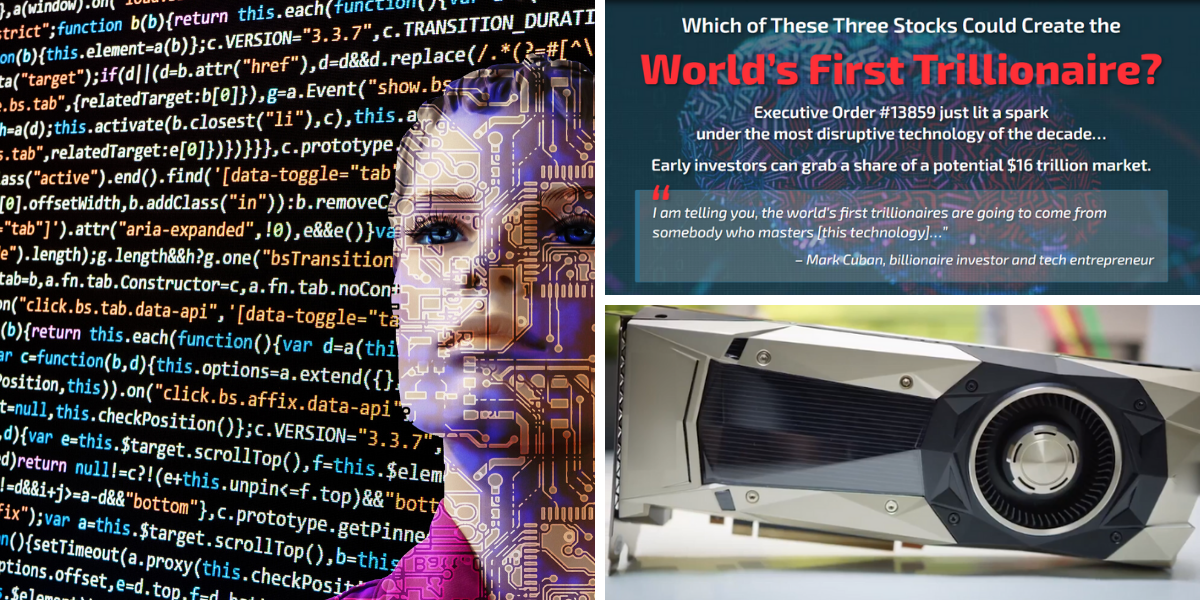 Tech expert Jeff Brown has been teasing, what he calls, "AI Accelerator" technology and three stocks that either design or manufacture it, which he thinks could make you very wealthy.

But what are these "AI Accelerator" stocks and are they any good?

In this review I'll be going over what the heck an "AI Accelerator" is and I'll be exposing his stock picks, ticker symbols and all.

Let's begin by going over the teaser a bit...

There might be multiple variations going around the internet, but what I cam across was this one, titled "World's First Trillionaire?"...

Jeff Brown, as we know, is the guy behind it. He's an ex-tech executive who worked for big companies in Silicon Valley and Tokyo, as well as an angel investor that has quite a good track-record for tech investing. In short, he knows what makes a new technology good and worth investing in... and now he works for the Bonner & Partners publishing company where he runs several tech-focused investment newsletter services.

In this teaser he claims that this new tech will create more wealth than all the FAANG stocks combined.

And, this is the tech that Mark Cuban was quoted talking about, saying that "the world's first trillionaire will come from this technology".

And the same goes for President’s Executive Order 13859, which was mentioned in the presentation. This is just an initiative that was signed to promote and protect AI innovation in the US... as a whole.

Some talk about the "AI Accelerator" tech specifically..

And we know that it has to do with some sort of chips that will be up to 100x faster than those in current smartphones and computers can't.

What type of gains can you expect if you invest in this tech?

Well, of course the opportunity is hyped-up like no-other. Jeff Brown shows us charts of other tech companies, such as Veritone here, and hints that the 3 companies he's teasing could follow similar trajectories... 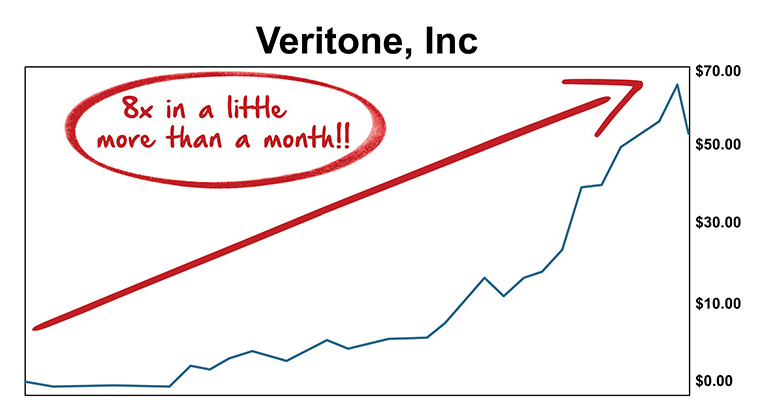 How do you get more info on his stock picks?

It's all neatly included in a "free report" he's giving out, titled The First Trillionaires: 3 Ways to Profit from A.I.’s $16 Trillion Wave... 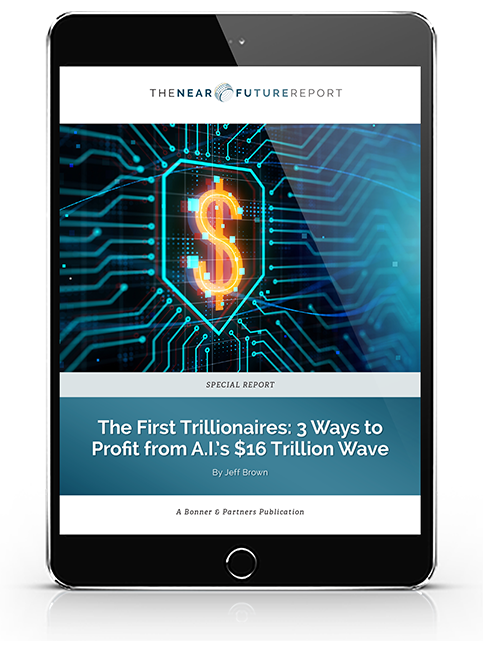 And how do you get your hands on this "free report"?

Of course you have to whip out your credit card and buy into this subscription advisory service, The Near Future Report, which costs $49 for the first year and then $99/yr after that.

Makes perfect sense, right? A "free" report that you have to pay for... indirectly.

What Is An "AI Accelerator"?

We're told it's critical for running 5G and it will be used to solve the big "AI problem".

And we were told that the tech is included in this device... 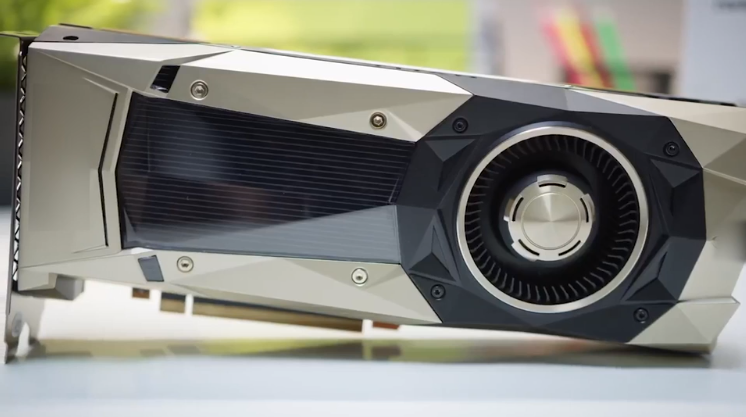 What are we looking at here?

It's a Nvidia Titan video card, aka graphics card. And later in the presentation we were shown NVIDIA’s GEFORCE GTX chip, which is a GPU that is inside graphics/video cards... and it is this GPU technology that is the focus here.

What the heck's a GPU?

GPU stands for Graphics Processing Unit, and these are used for visual processing... being used more and more in AI technology. Basically, they are microprocessors that specialize in one computing task and can process data much faster than CPUs, for example, which is why they are important for AI, 5G, etc. Data needs to be processed fast and the new GPUs that some companies are coming out with are the fix for this. They were originally made for gaming, but fast processing is fast processing... and so they are important for AI and whatnot.

For more info, you can refer to this short informative video I found:

In the presentation Jeff Brown teases 3 different companies. He hypes the heck out of them and makes it sound like you've just struck the jackpot... but of course you have to buy into his newsletter to get the report that provides information on them.

Well... normally you would... but instead I'll just tell you the 3 companies he's teasing for free.

The first company we are told is the one that makes chips, or rather, "AI accelerators" for the big supercomputer in Oak Ridge Laboratory called Summit.

We are also told that its CEO was named Businessperson of the Year by Fortune magazine.

It's good old Nvidia (NVDA), which does make (better said, designs) chips for the Summit supercomputer and its CEO, Jensen Huang, was named Businessperson of the Year in 2017.

Nvidia specializes in GPUs, which are heavily used in AI technology as we already discussed. Nvidia is at the top of the list when it comes to designing these chips, and has been teased as an investment opportunity by many other newsletter advisory services because of its positioning in the industry (it's been teased by The Motley Fool and it's been called the "5G Master Key" by Casey Research).

This pick makes perfect sense since we were shown Nvidia chips during the presentation.

This company he mentions is the first to manufacture 7-nanometer chips, which are smaller and can fit more transitors... one of the biggest benefits being that they are more energy efficient.

It's also mentioned that the company who makes these has made a $600 million deal with the US government.

It's Advanced Micro Devices (AMD), which is the first to come out with 7-nanometer chips and did win a $600 million deal with the US Department of Energy to build a supercomputer... which will be used for nuclear weapons modeling by the way.

AMD's popular Radeon GPUs are in direct competition with the GeForce GPUs from Nvidia, and are hand-in-hand when it comes to performance, but they have a lot more to offer other than just this. For example, their new "SenseMI Technology" has learning and adapting features to help the AMD Ryzen processors customize performance.

Not only that, but Nvidia and AMD actually work together on certain things. Nvidia's DGX A100 AI system, which has been used by the Department of Energy to help fight against covid-19, actually features two AMD processors of all things!

And the last company being teased here is Taiwan Semiconductor (TSM).

As was mentioned, the first two companies design these "AI Accelerators" and this third company builds them... and this is what TSM does, being the world's largest semiconductor foundry.

Jeff Brown also tells us that this company built a new $16 billion factory, which TSM does plan to do in the US.

There's no doubt that all 3 stocks could be good investments. All are solid companies and all are positioned well for the inevitable AI boom that we'll see happening.

But are they really as great as Jeff Brown makes them seem? Probably not! You certainly shouldn't expect to become a trillionaire... that's for certain.

AMD is the smallest company of the three, but none are tiny microstocks that are set to soar. They are all established and you shouldn't be expecting the 100+x gains that Jeff Brown is basically teasing.

I hope this quick review helps and has provided some value to you.

As always, let us know what you think about these picks in the comment section below. Would you buy NVDA, AMD or TSM?