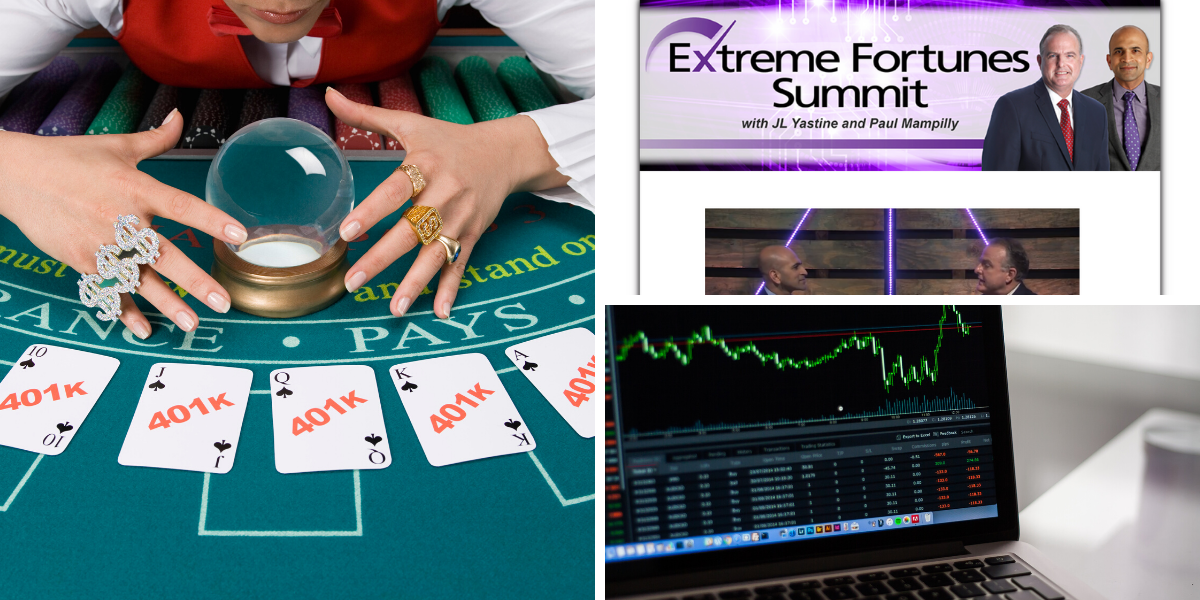 The Extreme Fortunes Summit with JL Yastine and Paul Mampilly presents an investment opportunity to potentially make 3,500% gains, or at least this is what we are told. But what's really going on here and is this all legit?

If you're looking for more information on this "Extreme Fortunes Summit" then you're in the right place. In this review I'll be going over how it all works and we'll be taking a look at the stocks Mampilly is recommending.

There might be multiple different teasers for this, but what I came across was this... 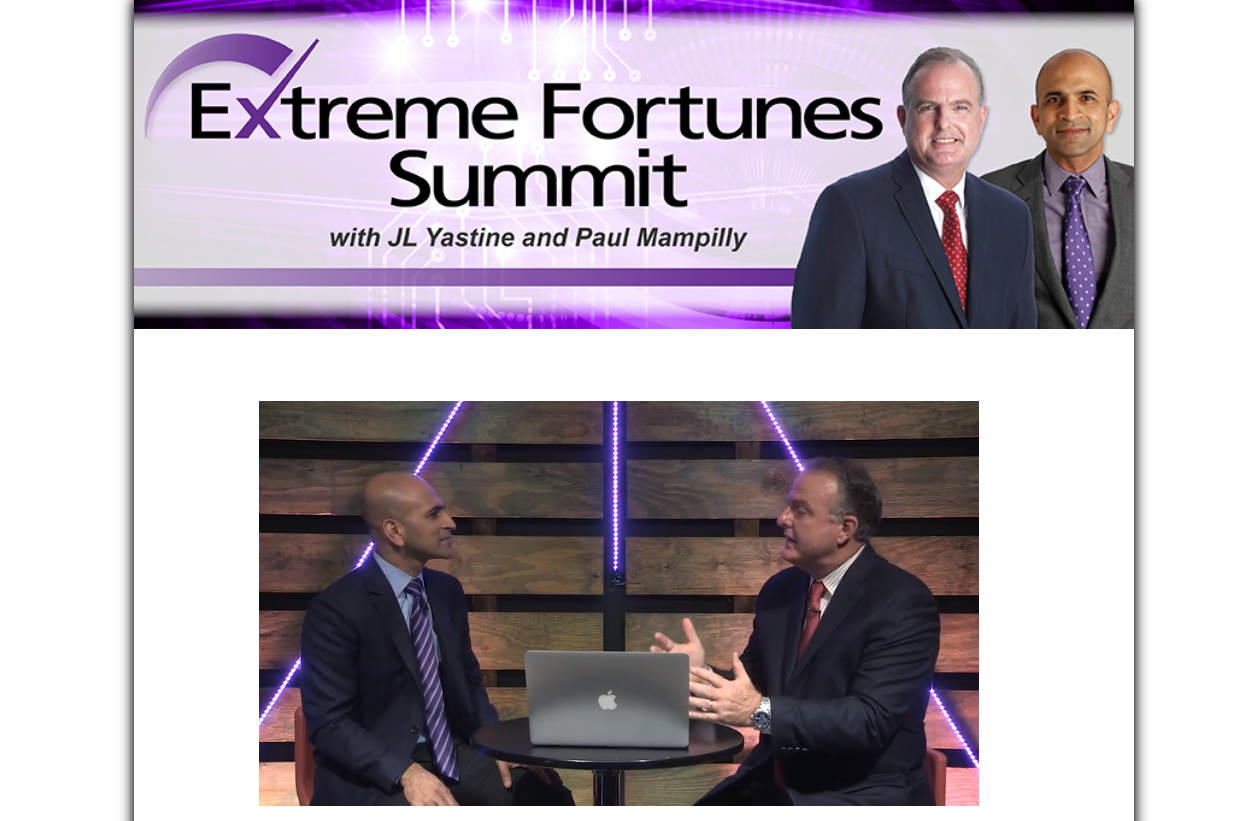 The ridiculously long teaser presentation is put on by JL Yastine and Paul Mampilly, and is supposed to look like somewhat of an interview-type broadcast. JL Yastine played the act of the interviewer and Paul Mampilly was being interviewed on his investment strategy. However, both men work for the Banyan Hill Publishing company and it's really just a promotion.

Mampilly claims that he has "cracked the code", so to speak, and has found a way to uncover stocks that are set to soar 1,000% or more. He is so confident in this that he even has a "$100k guarantee"... 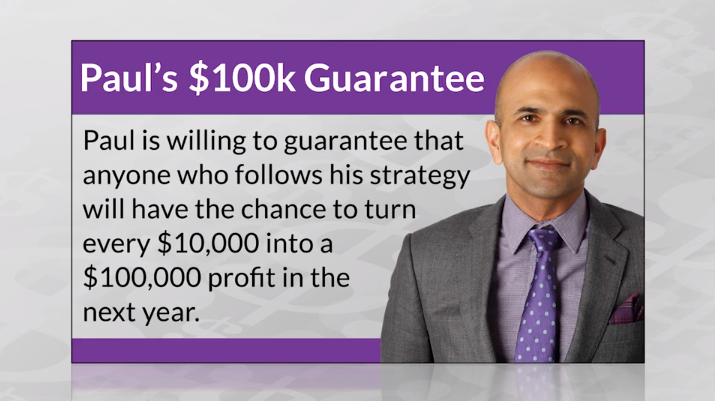 However, I'm always hesitant to trust such kinds of outlandish guarantees, and besides, even if you don't get a chance to make $100k in the next year the only thing you'll be able to get is a 2nd year of the service he is selling for free. As far as I can tell there aren't any money-back refunds, which I'd much rather see.

Anyways, in the Extreme Fortunes Summit presentation Mampilly talks about how there are around 43 good stocks every year that go up 1,000% or more and that it is his goal is to find these before they do.

Yastine and Mampilly go on to talk about a bunch of winning stock recommendations Paul's made over the years, such as Clearfield Inc and Accesso Technology Group (of course they show the best examples)... 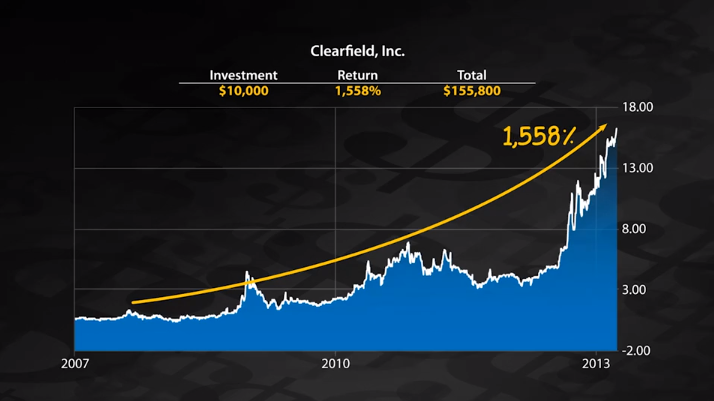 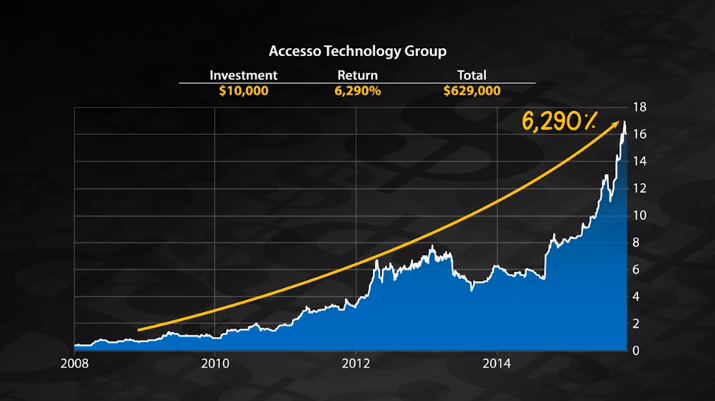 Paul Mampilly teases one particular stock that is his number one pick, which he claims:

He also talks about 4 other investments he's recommending. So there are five stocks total, and here are the sectors they're in...

How do you get more information on them?

Well, as expected, he is giving out a report that includes all the details. This report is called The Next Stock Market Windfall... 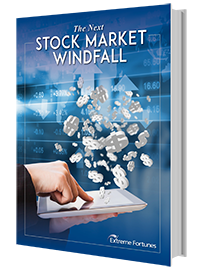 HOWEVER, also as expected, in order to get your hands on this report you first have to buy into the subscription advisory service being promoted (Extreme Fortunes which costs $2,995/yr). It's all a sales pitch really, and I'll go over more about this shortly.

Something else you should know...

Throughout the video we were shown a bunch of testimonials from people who have supposedly made tons of money from Paul's recommendations.

Now I don't doubt that there are many people who have made money from his advice, but I'm not entirely convinced what's being shown in the presentation is true... because the images are fakes... 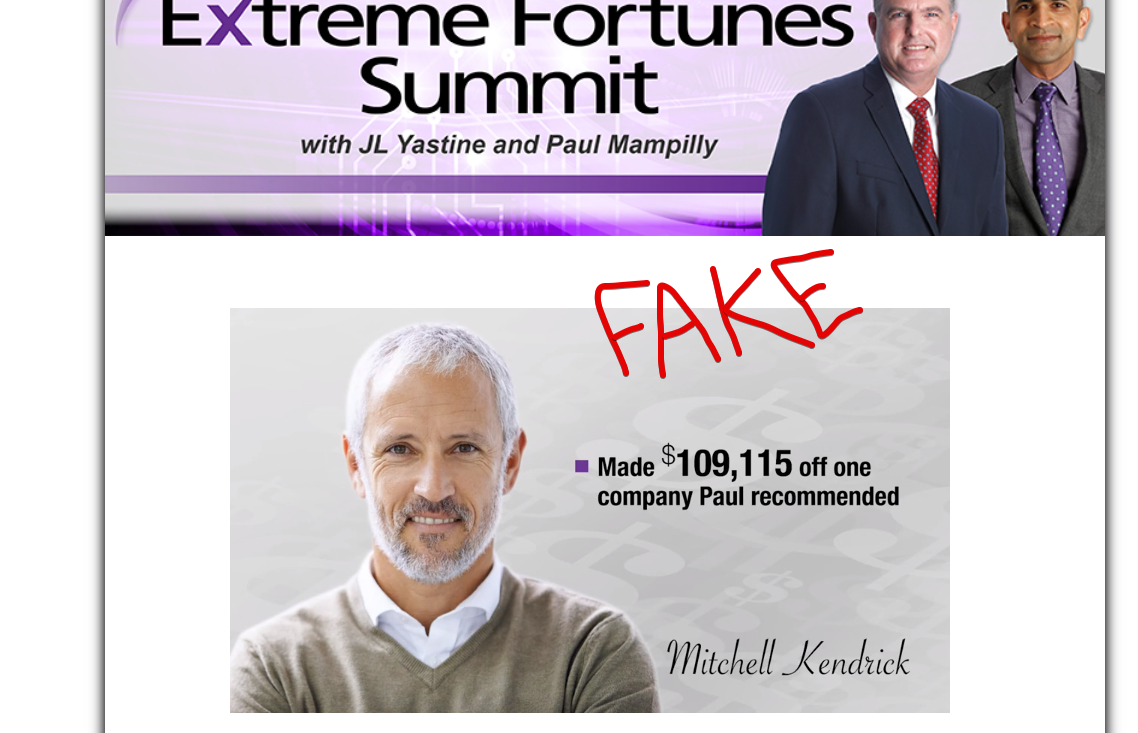 How do I know it's a fake image? Well, because I did a reverse Google image search and found that it is actually a stock photo available for purchase by anyone who wants to buy it...

So what we have here is a promotional presentation by JL Yastine and Paul Mampilly that teases 5 stocks you should buy right now, one of which Paul thinks will increase 35-fold... things maybe sound a bit too good and easy to be true, and there are fake images being shown so who knows whether or not all the testimonials are real or not.

The People Behind This

As you already know, Paul Mampilly and JL (or Jeff) Yastine are the two guys behind this. JL Yastine just plays the role of the interviewer with Paul being the focus. Both guys work for Banyan Hill Publishing, which is an investment advisory firm that publishes a variety of different investment newsletter services and whatnot.

Although Mampilly might look like nothing more than a really good salesman to some, he actually has quite and impressive background. Paul used to work on Wall Street where he managed multi-billion dollar hedge funds and performed very well. In fact, during the 2008 recession he partook in an investment competition by the Templeton Foundation where he grew a $50 million investment into $88 million, which won him an award.

Mampilly is no joke and certainly knows his stuff. He's the type of person you'd want to give you investment advice. That said, I bet he could be a lot more successful with his investment recommendations if he wasn't spending half his time working on misleading promotional videos, which are constantly coming out.

And by the way, this is focused on regular old stock trading, not options and so on.

In order to find these stocks that have big potential but are still rather safe plays, Mampilly looks for them to meet the following criteria:

This last "phase 3" criteria is something I've been seeing a lot lately with different investment advisory strategies, and for good reason. Seeing what company insiders are doing is obviously a big deal, because they have inside information as to when a new product might becoming out, when an acquisition might take place, etc.

Looking at insider activity by filtering through all the Form 4's that are being filed is something that was the focus of Jeff Yastine's "590 Triple Digit Winners" teaser and it was called "The Smartest Investment Strategy of All Time" in the teaser with Alexander Green featuring Bill O'Reilly.

What Is Extreme Fortunes?

Extreme Fortunes is an investment advisory service that Paul Mampilly runs over at Banyan Hill Publishing. It's pretty expensive, at $2,995 per year (and remember there aren't any refunds), but there is no doubt him and his team put a lot of time and effort into screening their stock recommendations and putting this service together.

Here's what you get as a subscriber:

Similar to other service he provides like 100X Club and IPO Speculator, this is also a follow-along style advisory service.

In the report he's giving out he reveals 5 stocks. However, let's just talk about the main one... which he claims he's been watching for 5 years and thinks it's ready to increase 35-fold any time now.

Well, let's go over what we are told, which is that this company:

And of course we also know from Mampilly's 3-phase criteria that the stock also trades for less than $25 and has a market cap of under $3 billion. Plus he mentions that insider holdings have doubled in the past year.

However, I haven't been able to find a good match based on these clues, unfortunately.

I know that Paul Mampilly has mentioned being a fan of the following precision medicine companies in the past:

And I also know that he has recommended Myriad Genetis (MYGN) in the past, but none of the clues given match up well enough with these companies for it to be a positive match.

So at the moment I don't have an answer as to what the stock is that he's teasing could increase by 3,500%. There just aren't enough clues to piece this thing together.

*If you have any additional information on the stock Mampilly is teasing then please share it with us in the comment section below this post. It would greatly benefit other readers and we all would really appreciate it!

Hopefully this review has helped clear up what's going on here so that you can make a better and more informed decision about whether this is right for you.

Take care and be sure to leave any comments/questions in the comment section below. We like to hear back from our readers!