“The Smartest Investment Strategy of All Time” Review – Will Cost You $4,000/yr 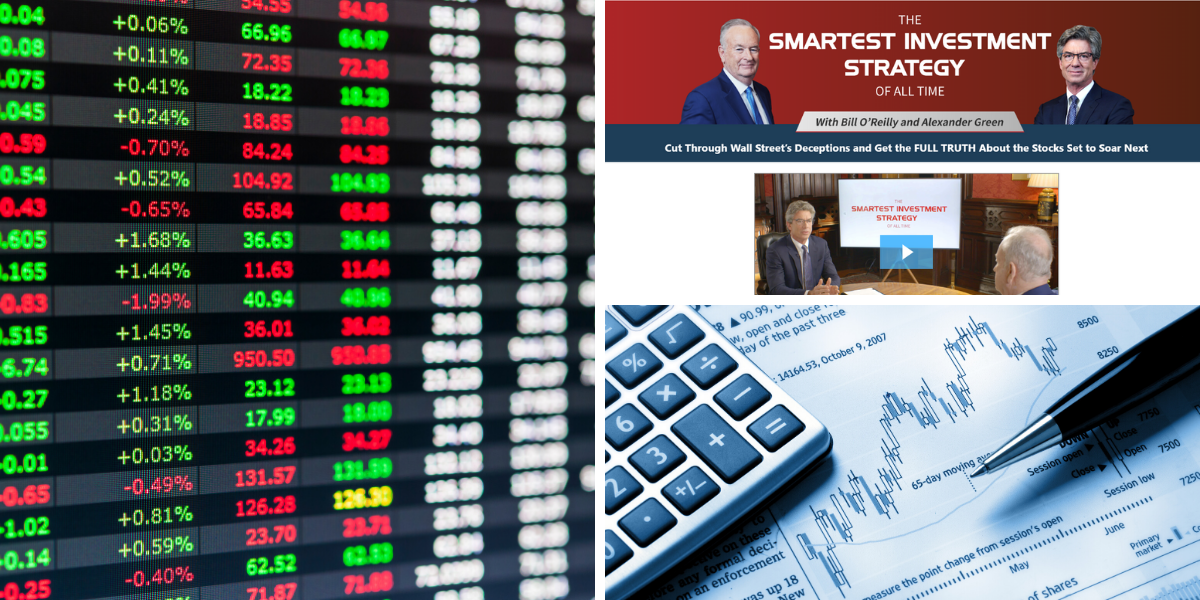 What is Bill O'Reilly and Alexander Green's presentation for "The Smartest Investment Strategy of All Time" all about? Is this opportunity legit and what should you know about it?

In this short review I'll be going over what exactly is going on here and breaking things down.

There might be multiple variations of this presentation floating around, but what I came across was aptly titled "The Smartest Investment Strategy of All Time" and was set up to appear as an interview in which Bill O'Reilly was interviewing Alexander Green... 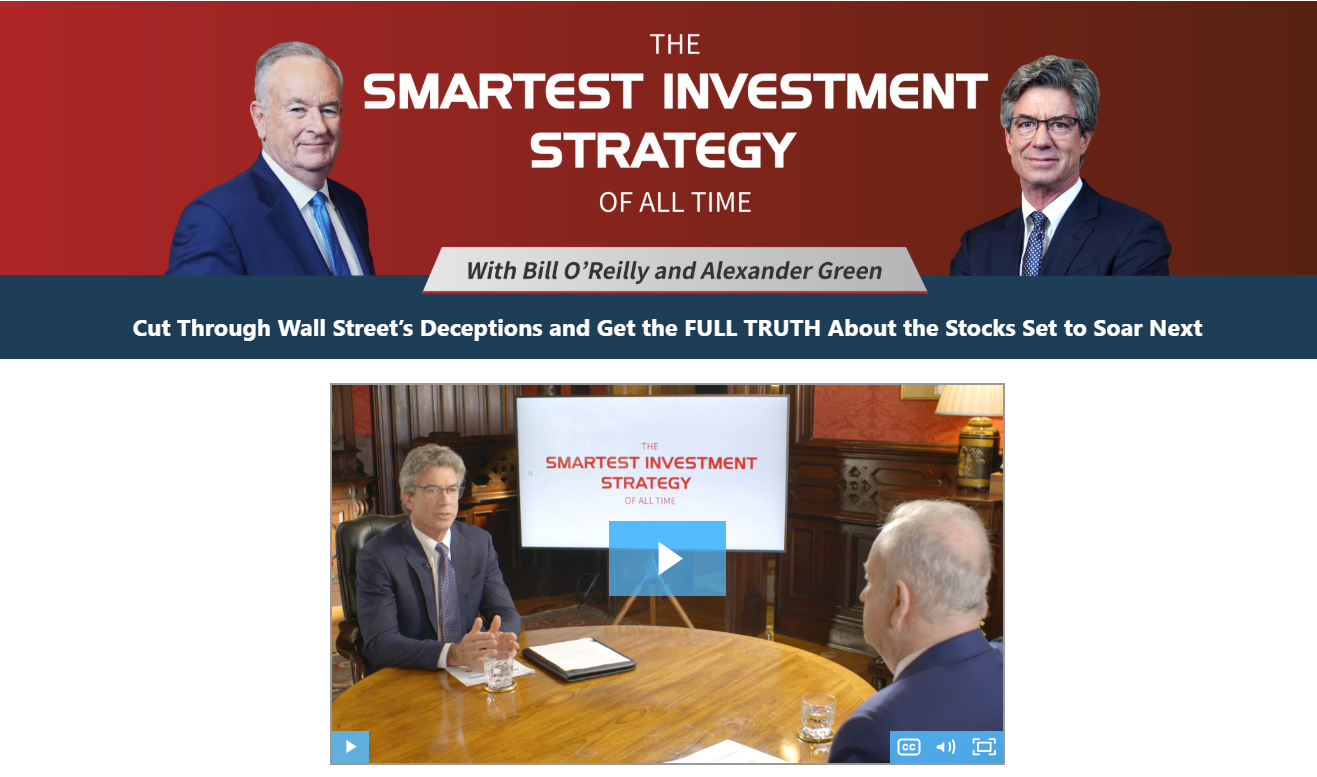 However, what you might not know is that this was actually a promotion by The Oxford Club, and there's no telling how much Bill O'Reilly is getting paid for it (my guess is a heck of a lot considering the price of the subscription being pushed).

What Is "The Smartest Investment Strategy of All Time"?

This is a strategy that Alexander Green uses to predict when a stock will rise or fall, which O'Reilly claims is one of the only definitive ways to predict such.

This strategy is said to have been able to predict the collapse of companies like Enron... and it makes perfect sense.

It's all about following the money. Don't listen to the media noise and what company execs are saying, look at what they are doing with their money.

Enron, for example, was praised by the media and investors were pouring in, but in the meantime the CEO, and other management, was selling shares... so what does this tell you? Obviously they knew what was really going on and knew it wouldn't last... and were cashing out.

These people all have access to non-public information... information that could be a big advantage, and often is. So it makes perfect sense to look at what these insiders are doing, knowing the knowledge they have, and to do same.

Throughout the presentation by Mr. O'Reilly and Green we were shown many examples of when following insider trades worked out to be a huge advantage. One of which, USA Technologies, was getting horrible press attention and everyone thought the company was going under. BUT, the owner bought a large amount of shares right before an unexpectedly positive earnings report was released and sure enough the stock shot up after that... 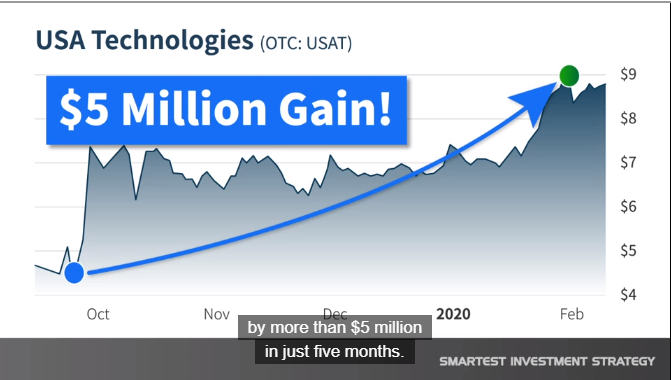 It's a simple strategy that makes sense, and this is what we like to see here at GreenBullResearch.

Finding this inside information:

When insiders buy or sell shares of their company it is public information. This is required by law and this is how insiders can do this legally. It's not the illegal "insider trading" that many are familiar with hearing about.

Insiders are required to file a Form 4 with the SEC, and they must file within 48 hours of their buys/sells.

How "The Smartest Investment Strategy of All Time" Works

The Form 4 that I mentioned is required to be filed by law whenever an insider makes a trade - this form is filed through the EDGAR database. This is a publicly accessible database that is used to keep track of insider moves.

However, it's not quite as easy as it may seem finding trades that should be followed. There are more than 2,000 Form 4's that are filed through the EDGAR database on a daily basis, most of which don't really mean much of anything.

This is where Alexander Green and his team of research come in. They filter through the thousands of Form 4's and find trades that are worthy of following. This is a 4-step process...

Most people know who Bill O'Reilly is. His career can mostly be summed up as being a political commentator, and one of his most notable roles was that of being the host of The O'Reilly Factor, which was a Fox News show that was the highest-rated show on cable for 16 years.

These two have collaborated in the past. Not that long ago they did a presentation for "The Great American Wealth Project", which was another sales lure to bring in subscribers for one of Alexander Green's subscription newsletter advisory services.

If you were able to make it through the entire presentation then you know it ended in a sales pitch, similar to Matt Badiali's "Simple 3-Step Process" and Jeff Yastine's "Law of Unstoppable Profits", both of which we reviewed recently.

If you want to get the help of Alexander Green and his team, then you have to subscribe to his "The Insider Alert" advisory service. This service costs $4,000/yr, but how much of this O'Reilly gets a cut of is not known. It certainly isn't cheap.

Here's what you get if you do decide to join:

This review isn't about whether or not The Insider Alert is worth joining, but hopefully it gave you a good overview of what's going on here and provided some value. You're own due diligence will be required to determine whether or not you should join his advisory service.

Please leave any comments/questions below. We're always happy to hear what our readers have to say!