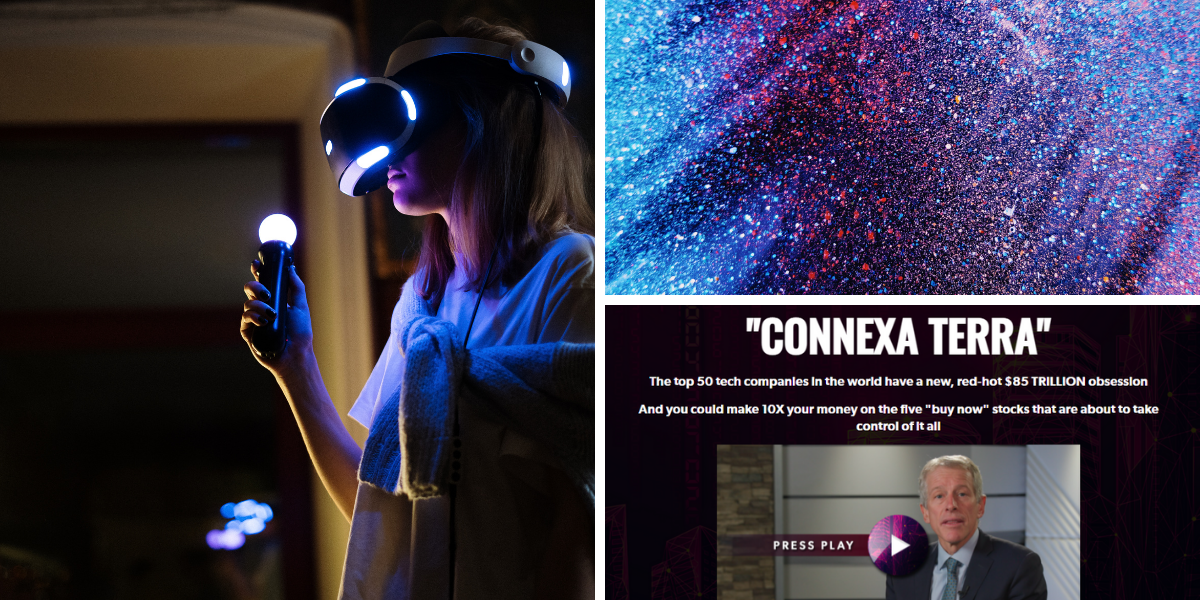 Whitney Tilson says the technology he’s about to share with us today is so powerful, it could cut our grocery bills, reduce the amount we pay for gas, and even slash medical bills.

He calls this technology “Connexa Terra” and it’s a situation unlike anything we’ve seen in human history. Let’s find out how much truth there is to this.

The presentation instantly captures our attention by saying that Facebook is already spending $10 billion on this technology this year alone and that nearly all of the top 50 tech companies in the world are in a relentless race to control “Connexa Terra”. Empire Financial Research was founded in 2019 by former hedge-fund manager Whitney Tilson. It describes itself as “a collection of contrarians on the hunt for investment opportunities that Wall Street has overlooked” and they aren’t afraid to make bold predictions. We have reviewed several Empire Financial Research presentations here in the past, including Whitney Tilson’s “Netstake” Stock Pick and Enrique Abeyta’s “Robinhood of Crypto” Stock.

The reason for the race to control “Connexa Terra” is because this technology is set to completely disrupt the entire $85 trillion global economy and Whitney believes he’s found 5 stocks that are “on the verge of controlling everything”. In fact, he’s even going to reveal the name and ticker symbol of one of these stocks right here in this presentation.

Before we get to this though, our presenter expounds on the rarity of this opportunity and how it could be bigger than anything we’ve seen over the past three decades, including Apple in the early 2000’s or Netflix in the 2010’s. Some bold claims for sure, but according to the data, there is at least some element of truth in them.

For example, it took the internet 38 years to become worth roughly $32 billion, yet according to Tilson, “Connexa Terra” is already worth nearly $48 billion. Its also projected to hit $800 billion within just the next two years. This growth rate blows the internet’s out of the water, 893 times over. This is the part where we caution that past performance is no indicator of future results, but this type of unprecedented growth is bound to take a lot of people up with it and create a tremendous amount of new wealth, just like the internet did and still continues to do.

Whitney next tells us that “opportunities like this move fast” and if we want to profit from this situation, then we must act quickly. The way to do this (according to him) is to subscribe to the comprehensive investment research advisory service called the Empire Stock Investor. The cost for a subscription is just $49 for the first year – 75% off the regular $199. What in the World is “Connexa Terra”?

“Connexa Terra” is Tilson’s code name for…The Metaverse. Recall at the beginning of this presentation, Whitney said he’d give us the name and ticker symbol of a fantastic “Connexa Terra” company that we should buy right away?

That company is Meta Platforms Inc. (formerly known as Facebook), which is leading the charge on this new technology. It’s all-in on the technology and spending upwards of $10 billion per year to make sure it happens. Whitney says what makes this such a great investment is that we can buy Meta today, which is an incredible cash cow of a business, before this new technology becomes fully realized and essentially pay nothing for it. In other words, we would own everything Meta owns – Instagram, WhatsApp, Facebook and also get in on The Metaverse or “Connexa Terra” before other investors begin piling into it.

To break this down a bit, The Metaverse can best be described as a network of 3D virtual worlds focused on social connection. The key component behind it is virtual reality technology, which has been under development for at least 60 years, with the first VR devices being used for flight simulation, automobile industry design, and military training purposes as early as the 1970’s.

Investors have been relatively indifferent to VR technologies until government imposed restrictions in 2020 kicked off a renewed consumer interest in the technology and its various applications. With VR making major strides in both hardware with lag-free, low-persistence displays and software over the past few years thanks to major investments by at least 230 companies, including Amazon, Apple, Google, Microsoft, Sony and Samsung, the global VR market is expected to grow to $62 billion dollars by 2027.

The good news, is that there are several ways to potentially make a lot more money, more quickly with VR and Whitney is going to tell us about them.

The Metaverse is going to make all kinds of things possible and there are not one or two or even three, but four separate investments that we can get in on to take advantage of this mega-trend in the making.

Whew, that was a lot to take in. In brief, here are the investments we think Whitney Tilson is hinting at above in order:

How do these investments stack up against others you could be making right now?

What stands out about Tilson’s picks is that each and every one of them is a well established large cap, including Ethereum.

Typically, stocks that are already worth billions take a few years or more to get even bigger, so the “make a lot more money, more quickly” angle doesn’t really apply here, unless you want to make a case for Ethereum, which itself is already at a market cap of $389 billion as of this writing. In our humble opinion, there are better, more undervalued assets out there that may return just as much over the mid/long-term.

Is The Metaverse and virtual reality tech the future or a fad? Let us know your thoughts in the comment section below.