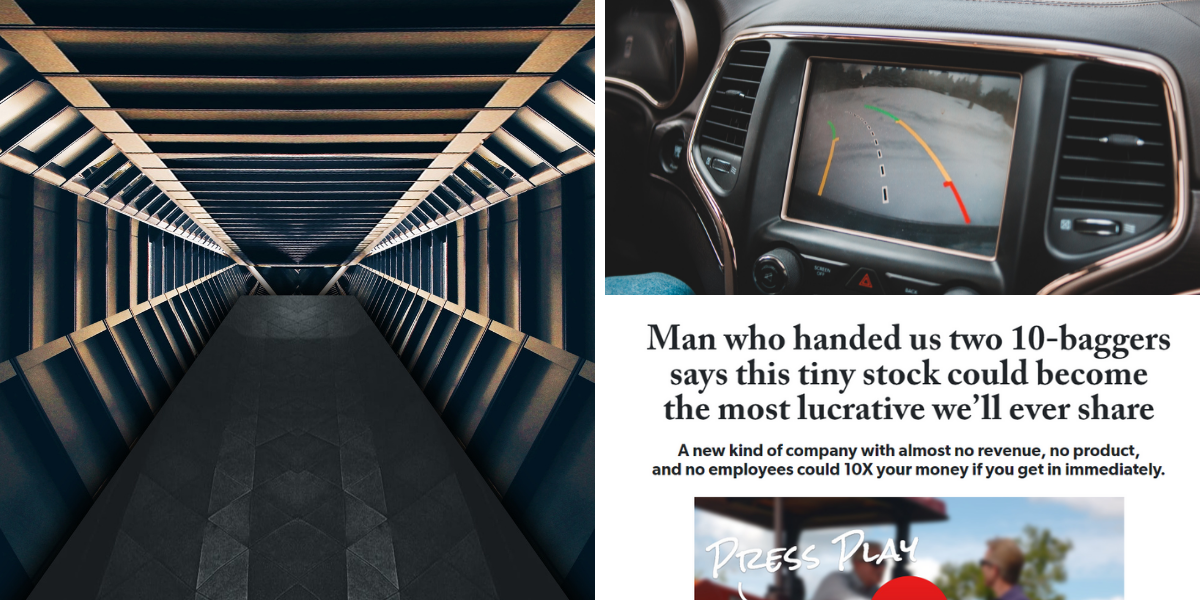 Self-driving cars have been the dream of many inventors for the past century, but now the technology may finally be catching up to the fantasy.

In one of his latest pitches for Stansberry Research, host Tom Mustin and investor Mike Barrett tease a self-driving car company that has “the ultimate intellectual property” and could bring returns of over 10x to those who get in now. Let’s find out what part is fact and what’s fiction.

Host Tom Mustin starts the presentation by mentioning a pecan nuts grower of all things who “has uncovered a secret that’s handed him a stream of 1,000% gains”. What’s more, these have come from one of the tiniest and least-known stocks in America.

Tom is slowly introducing Mike Barrett here, a former Stansberry subscriber who is now collaborating with the subscription-based publisher of financial research to present companies that own intellectual property as opposed to investing in hard assets. We have covered more than a few self-driving vehicle presentations here in the past, including Charles Mizrahi’s “L5” Autonomous Vehicle Stock and Keith Kohl’s LiDAR King Stock, among others.

He claims that “by investing early, when a product is still barely out of the theory stage, you get to invest in the next breakthrough before it goes on sale”. Mike explains it as there being an entirely new class of tiny companies most people have never heard of before. They don’t necessarily have a physical product. And in the beginning, sometimes they don’t even make money!

According to our presenter, there are 3 types of intellectual properties:

These intellectual properties create compounds or business structures, systems or even minor components, all of which might be worthless on their own, but which can and do launch billion-dollar industries overnight and revitalize old ones. This is what Mike’s here to do today, brief us on a tiny stock he says we’d otherwise NEVER hear about and which be believes could end up being a ten-bagger.

In short, Mike has uncovered a very small new company who owns the intellectual property for a technology that could soon do for the auto industry what Apple did for computers.

Before we get any more details on the “tiny multi-bagger stock”, the guys pitch a subscription to Stansberry’s The 10X Investor investment newsletter. The initial price for a one-year subscription is a hefty $5,000, but for a limited time, we’re told that we will be able to get a subscription for “only” $2,000 per year. Included in the offer, apart from 12 monthly issues of the newsletter, you will also receive a free copy of the report “The Ten-Bagger Secret: How to Make 10 Times Your Money on the Best Intellectual Property”, which includes the name and ticker of the company in question as well as one free year of Extreme Value – another Stansberry newsletter and much more.

What in the World is The Ultimate Intellectual Property?

Mike’s background as a former commercial real estate appraiser and MBA that studied cash flow modeling, has given him an edge in valuing complex intellectual properties, with “astonishing results”.

He’s definitely racked up some wins in this respect, like Kodiak Sciences (Nasdaq: KOD): And a few others. According to Mike, the secret to intellectual property investing is “the gap between a company with a known product and a company with nothing more than a valuable idea”, as this allows for huge profit potential if you find the right opportunity. He would be right, in that “the stock market is always looking for, and rewarding, the next big idea”.

Mike believes he has this in “the ultimate intellectual property”. It combines both “The Enabler” and “The Innovator” into a single tiny company he believes will change the lives of millions of Americans. This is because this little company has figured out the missing technology for one of the most exciting and promising new industries: Self-driving cars.

While no specific technology is ever revealed. Just Mike’s proprietary system for identifying intellectual property opportunities, it is hinted at that this is some kind of technology stack that is installed inside automated vehicles and performs one (if not more) key functions.

Although the presenters both do a good job of keeping tight lipped and not dropping much of any clues, we are inclined to think that the author is teasing a LiDAR technology company.

There just isn’t enough information provided to take even a wild guess at revealing any specific stock, but we can take a closer look at the underlying technology itself to determine if it is the real deal.

At its core, LiDAR, which is an acronym for “light detection and ranging” is a method for determining distances. It is commonly used to make high-resolution maps, with applications in archaeology, geography, and autonomous cars, among other uses.

Self-driving cars use LiDAR for obstacle detection and avoidance to navigate safely through environments…so its kind of mission critical to their overall operation. The very first generations of such vehicles adopted cruise control systems comprised only of LiDAR sensors. The technology has come a long way since these early days, going through several iterations such as 2d, 3d, and now 4d chips.

The latest generation 4D LiDAR-on-chip is capable of measuring distance as well as instant velocity of every point on objects without losing range. This holds the promise of high range performance coupled with a low enough cost to take autonomous driving to a mass scale. There are plenty of things that lend credibility to this discovery, for starters the technology was developed by former Apple engineers, who previously worked on the iPhone, Apple Watch, and iPod.

Another is that LiDAR’s laser-based system is among the most expensive components of self-driving cars and the key to enabling more advanced self-driving features. 4d is the logical next step that could get us there, at least when it comes to consumer passenger vehicles, as autonomous taxis and trucks still seem years away, baby steps.

Are you already invested in self-driving vehicles in one form or another? Is 4d LiDAR tech what will drive the mass adoption of electric vehicles (EVs)? Tell us what you think in the comment section below.