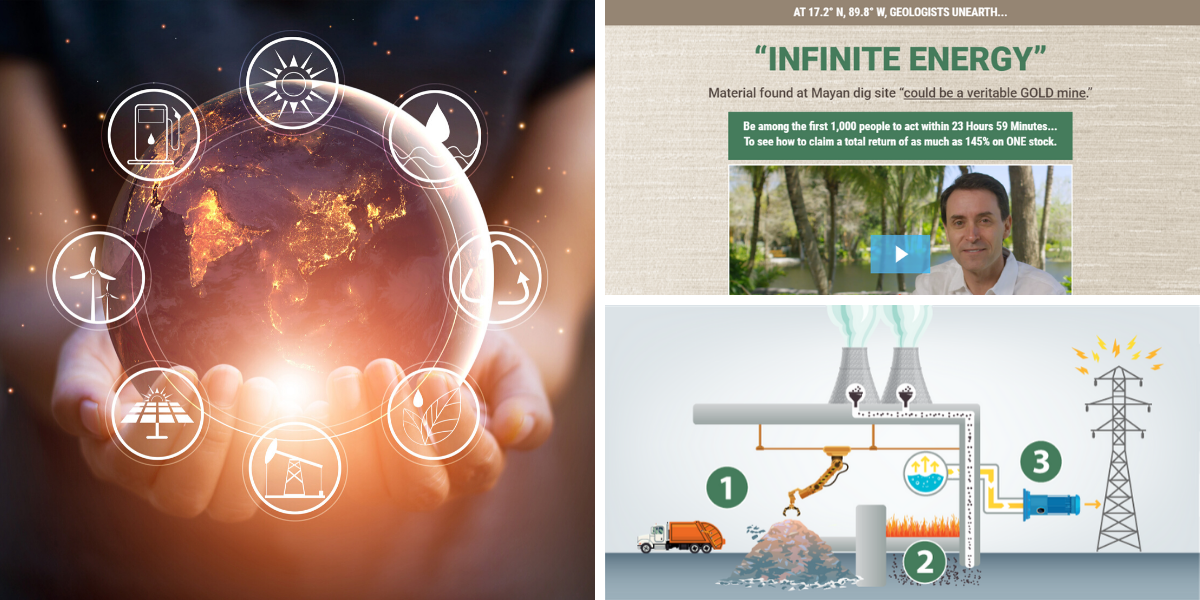 The Oxford Club's Marc Lichtenfeld has a presentation floating around for what he calls "infinite energy". In this presentation he teases one stock that he thinks will increase 145% by the end of next year.

My guess is that you want more information on what the heck "infinite energy" is and the name of his stock pick. If so, you're in the right place. In this short review I'll be exposing it all.

There are likely multiple teasers out there on the internet, but what I came across was this... "INFINITE ENERGY" Material found at Mayan dig site "could be a veritable GOLD mine."... 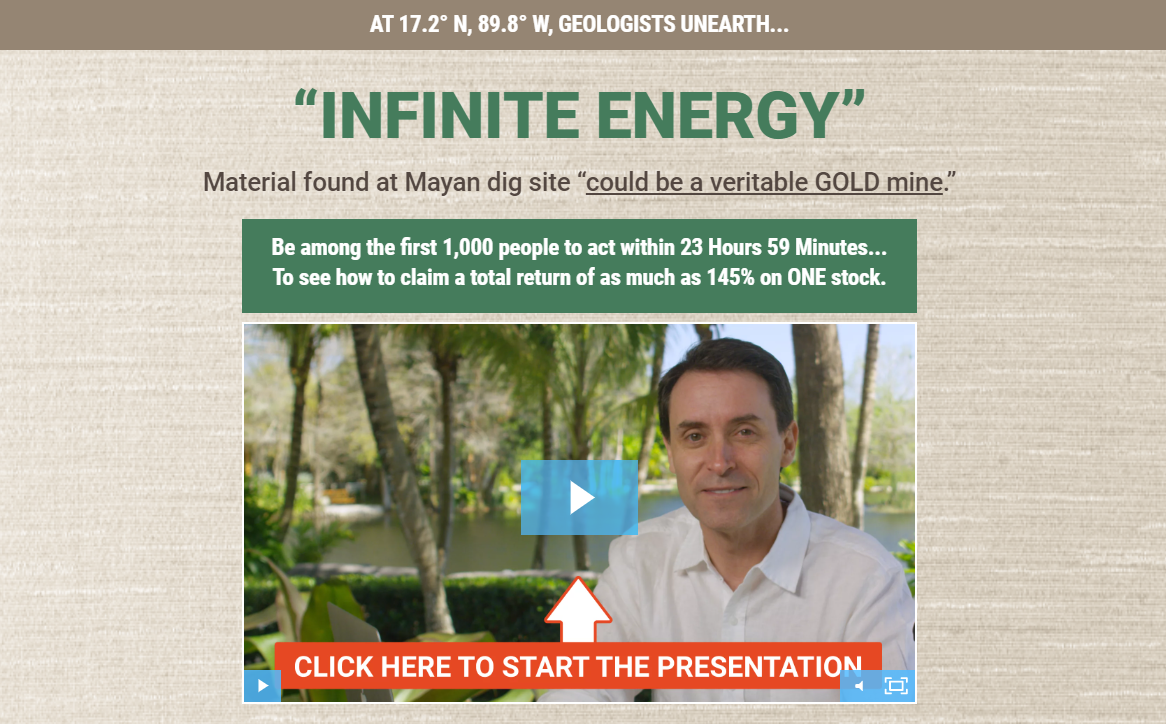 Marc Lichtenfeld is the guy in the presentation. He is a chief income strategist at The Oxford Club (same place who came out with the OPECalypse teaser) and runs several newsletter advisory services, including The Oxford Income Letter which is being promoted here. He got his start at the trading desk at Carlin Equities and eventually made his way to senior analyst at Avalon Research Group. In short, he's an experienced investor/analyst that you'd probably want to give you investment advice... and has been featured on CNBC, Fox Business, etc. for such expertise.

*He's also a big fan of dividend stocks... and the stock he's teasing here is one of such.

The presentation starts out like some sort of Indiana Jones movie. He talks about an excavation site deep in the central American rain forest just south of the ancient Mayan city Teotihuacan. According to him, you have to slash through brush for 3 days just to reach it and at the site they discovered that the Mayans were using an energy source lost for centuries.

Lichtenfeld calls this a "virtually limitless supply of energy"... or more simply put... an "infinite energy". 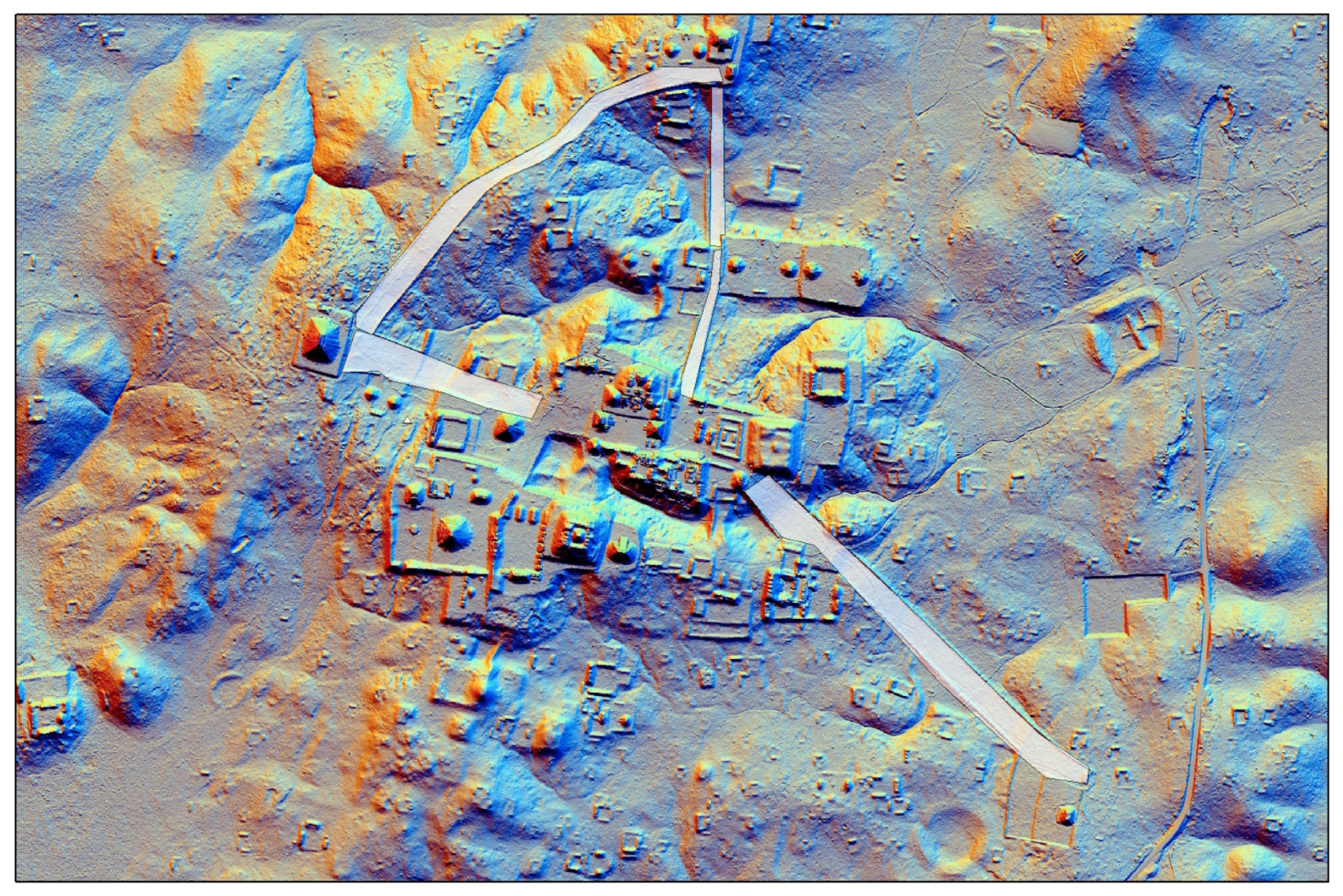 He claims that this "long-lost energy source" could power all of NYC for 18 years after just one year of new production, and that it is:

Furthermore, he claims there is one company positioned to take the lion's share of the $526.8 billion that this "infinite energy" is expected to pump into the economy.

AND, he claims that investing in this one company "could produce total returns... of as much as 145% by the end of the year".

A lost energy source that is "infinite" and sounds like it could save the planet.

But hold on just a second... this sounds a bit too good to be true, does it not? And it's not like we haven't come across similar energy teasers in the past, like the whole "endless energy" pitch from Paul Mampilly.

If you were able to make it through the entire long-winded presentation without dying then you already know the whole thing cumulated into a sales pitch.

In order to get more information on the stock he's teasing you need a copy of his "free" report, titled Collect a 145% Return From ‘Infinite Energy'... 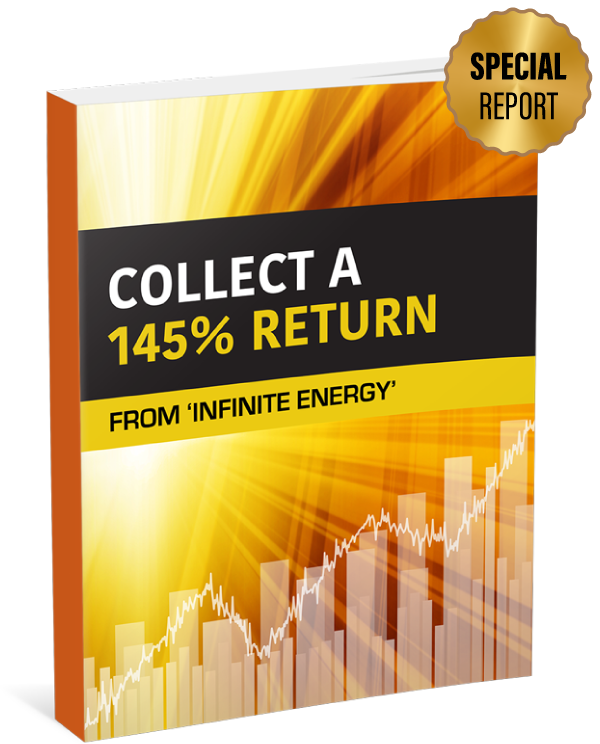 And how do you get this "free" report?

Well, of course you have to pay to buy into his subscription advisory service, The Oxford Income Letter. Makes perfect sense, right?

Without getting too into things, this is a follow-along advisory service that provides subscribers with investment recommendations on a monthly basis, analyses, trade alerts, etc. The cost is $79/yr for their premium subscription and $49/yr for the basic, cheapest, subscription.

What Is This "Infinite Energy"?

"Infinite energy" isn't some natural resource as the presentation leads one to believe at first. It is just the term Mark Lichtenfeld uses to refer to the energy produced by waste-to-energy processes. It's all about converting waste to energy.

*Note: Waste-to-energy (WtE) and energy-from-waste (EfW) are the same thing.

Now the Mayans that are talked about certainly didn't have an electricity grid that they were pumping electricity into with this process, but they were burning waste for heat that was used for cooking, heating, and potentially a range of other things, such as melting metals, etc... which still qualifies it all as a waste-to-energy process.

Waste-to-energy is the process of generating energy in the form of electricity and/or heat from waste. And of course in the modern age we are more interested in the generation of electricity with this process.

The waste-to-energy industry is still budding. This WtE process is a lot more popular in Europe than it is in the US, so there is still a lot of expected growth to be had.

This growth is largely coming from the movement to more environmentally-friendly energy sources.

If you think about burning waste for energy then it might seem strange that this is environmentally-friendly. However, Covanta uses pollution-control technology and, while there are still concerns with harmful toxins like mercury, lead and other toxins produced from burning garbage like this, Covanta's plants are strictly regulated by the government... and a 2008 study by the EPA found that waste-to-energy plants are, all-in-all, better for the environment than just dumping and leaving trash in landfills for a number of reasons.

So this industry definitely has some potential.

Let's get to the point. What is this stock that is going to supposedly rise 145% by the end of next year?

Well, it obviously is in the waste-to-energy industry. Some of the other clues we've been given include:

The good news (in a way) is that this industry isn't all that large yet, so finding the match wasn't as hard as it might have been if there were loads of companies in this space.

The company being teased here is Covanta Holding (CVA), which is a waste-to-energy company that uses the incineration method to turn waste into energy, and they also provide other waste management services, such as recycling and trash disposal. They use furnaces that burn at 1,800 degrees Fahrenheit to incinerate waste, which produces steam that turns a turbine and powers a generator.

All clues point to Covanta, CVA. There are also a few others small clues that match up as well, such as how Lichtenfeld mentioned a "Sam Z." investing around $600 million. He's referring to billionaire Sam Zell here, who is actually the Chairman of the Board at Covanta - made a fortune on real-estate.

Marc Lichtenfeld is very bullish on this company, as expected, and states multiple times in the presentation that he thinks the stock price could soar as much as 145% by the end of next year.

Will it really though?

Well, as with just about every wild prediction that is teased in an investment presentation, this future 145% gain is largely based on speculation. Analysts at CNN Business, for example, have a pretty modest average price forecast over the next 12 months.

So don't fall for all the hype just yet.

They are the biggest company of their kind in the world and in 2018 they burned more than 20 million tons of trash at their 40+ WtE plants around the world, and recycled 550,000 tons of metal.

But, revenues are slow to grow and it seems that the main thing that was attracting new investors were the dividends. BUT, these have been cut drastically since the whole pandemic situation, and they are now at just 4% yield, much lower than previously. The good news is that the stock is selling at the lowest it's been in years.

As usual, the teaser for this "infinite energy" is over-hyped to a large degree. It still could be a good play, but just don't expect to be retiring and traveling the world on your private yacht like Lichtenfeld leads one to believe they'll be able to.

I hope this review has provided some value to you. Be sure to let us know what you think about this pick in the comment section below. We like to hear back from our readers!