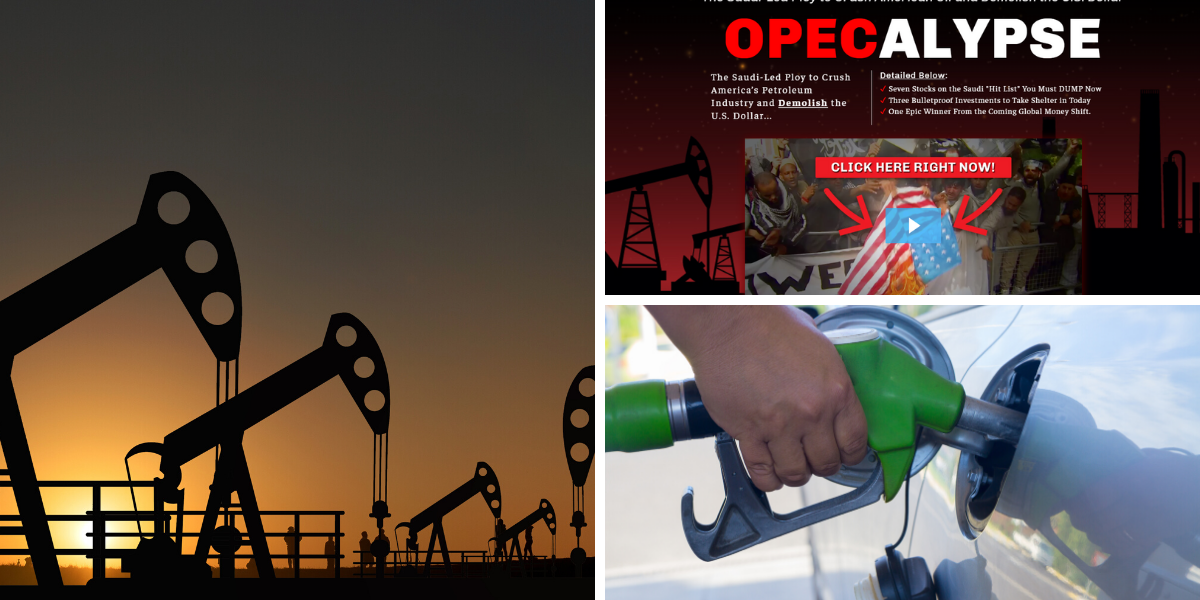 If you're looking for more information on The Oxford Club's "OPECALYPSE" teaser with Matthew Carr, then you're in the right place.

In this quick review I'll be going over what you should know about this teaser, the "protection plan" being used to lure in new subscribers, I'll be exposing some of the stocks he's teasing and more. 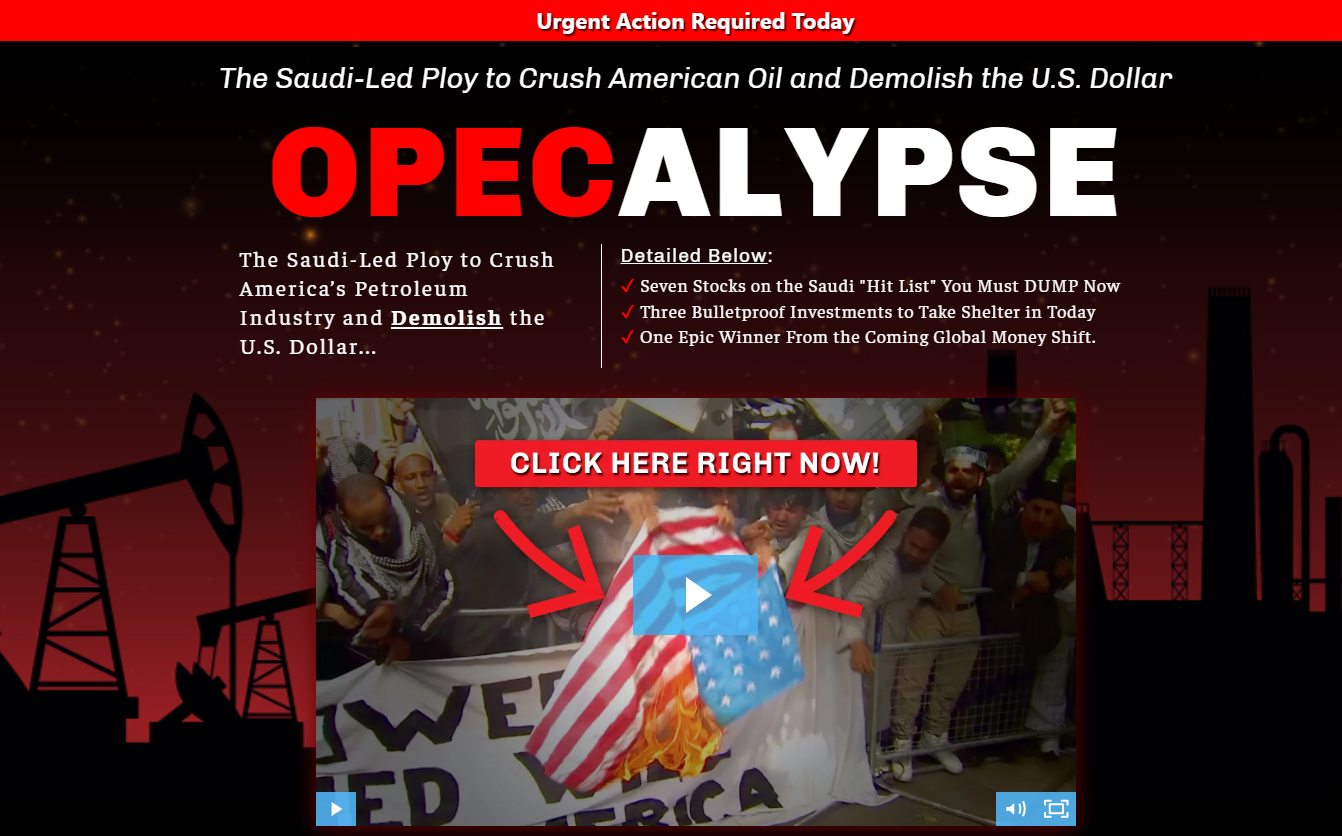 This teaser takes the old fear mongering approach to lure in new subscribers to the subscription service being pushed by The Oxford Club, which I'll talk about soon.

This is just a made-up word that refers to the impending doom that Matthew Carr believes will be coming our way due to OPEC and Saudi Arabia trying to destroy the US economy and their stronghold on oil.

Matthew Carr paints a very bleak picture of the future. He basically makes it seem as if we are all going to be doomed... UNLESS of course we follow his 3 step instructions.

Some of what is said in the presentation includes:

This has been a top concern among some high-up government officials. And it is true what was said about the drops in oil prices, as you can read on CNBC, Ted Cruz and other senators have even warned the Saudis to stop using "economic warfare" with their oil prices. This statement was made after Saudi Arabia dropped their oil prices drastically, which some believe is an attempt to put US energy companies out of business.

There's always some power struggle going on between countries for one reason or another, and right now many believe other countries are trying to take advantage of the fragile state the US economy is in.

The US dollar is a global currency and the petrodollar system is still in place, and this system of other countries using the US dollar for oil exports has benefited the US economy handsomely... but not everyone likes how the US makes out on the deal. We are told that China want's to take over this market and turn it into the "petroyuan".

And back to Saudi Arabia... their economy was hurt when the US passed them up and now has the highest crude oil production in the world.

The oil trade is big business, and everyone want's their piece (well, at least China, Russia, and Saudi Arabia).

As we are told:

AND... according to Matthew Carr there is another phase of the Saudi's "oil weapon" coming that he claims "will trigger a massive shift in the global economy".

He hints that it will be worse than the 2008 recession and that...

So what can you do about this impending doom and destruction that always seems to be looming around the corner in some people's minds?

Well, this is when the sales pitch comes into the presentation...

We are told that there are specific actions we need to take to protect our wealth, and these are all outlined in Matthew Carr's "End of the Petrodollar Protection Plan".

This "End of the Petrodollar Protection Plan" is a series of reports that detail what stocks you need to avoid, stocks that you should invest in, and one particular stock that "stands to go up 695% OR MORE from the U.S.-China money shift" (more on this soon).

BUT, in order to get these reports you first have to subscribe to Matthew Carr's Strategic Trends Investor advisory service, which is basically a follow-along stock picking service that provides subscribers with stock picks on a regular basis.

*Note: This is the same sales tactic that was used in other teasers we've exposed, such as with Paul Mampilly's "Endless Energy" pitch and Matt Badiali's "Magic Metal" teaser.

Who Is Matthew Carr?

Matthew Car is the chief trends strategist at The Oxford Club, which is the financial newsletter publisher behind this teaser and Strategic Trends Investor.

Before joining the team at The Oxford Club where he edits Strategic Trends Investor, The Viper Alert, Profit Trends and others, he was in the world of finance for around 20 years. He claims to be a leading analyst in the energy sector, but also has expertise in small cap tech, cannabis, cloud computing and so on. Basically, he is an expert on identifying trends, it it's not so important what industry they are in.

This makes sense because right now with this OPECalypse teaser the whole thing is based on a trend... a very pessimistic trend, but nonetheless a trend in the control of the oil trade.

The "End of the Petrodollar Protection Plan"

We are doomed unless we follow this plan, so we are told. But what is this plan exactly? Let's find out...

It consists of 3 stages, and for each step Matthew Carr teases certain stocks, let's begin going over Stage 1 and the stocks he things you should get rid of...

Stage 1: Dump These Holdings as the Dollar Falls

The first stage of the protection plan is to get rid of stocks that could tank... which are indebted US companies that could go bankrupt if the interest payments rise as predicted.

All of these companies are popular investments that are in many 401(k)s. Here's what we are told:

Now normally you would have to buy into Strategic Trends Investor to get access to the report that goes over these 7 stocks you should dump, which is Seven Popular Stocks to Dump Before the Petrodollar Collapse... 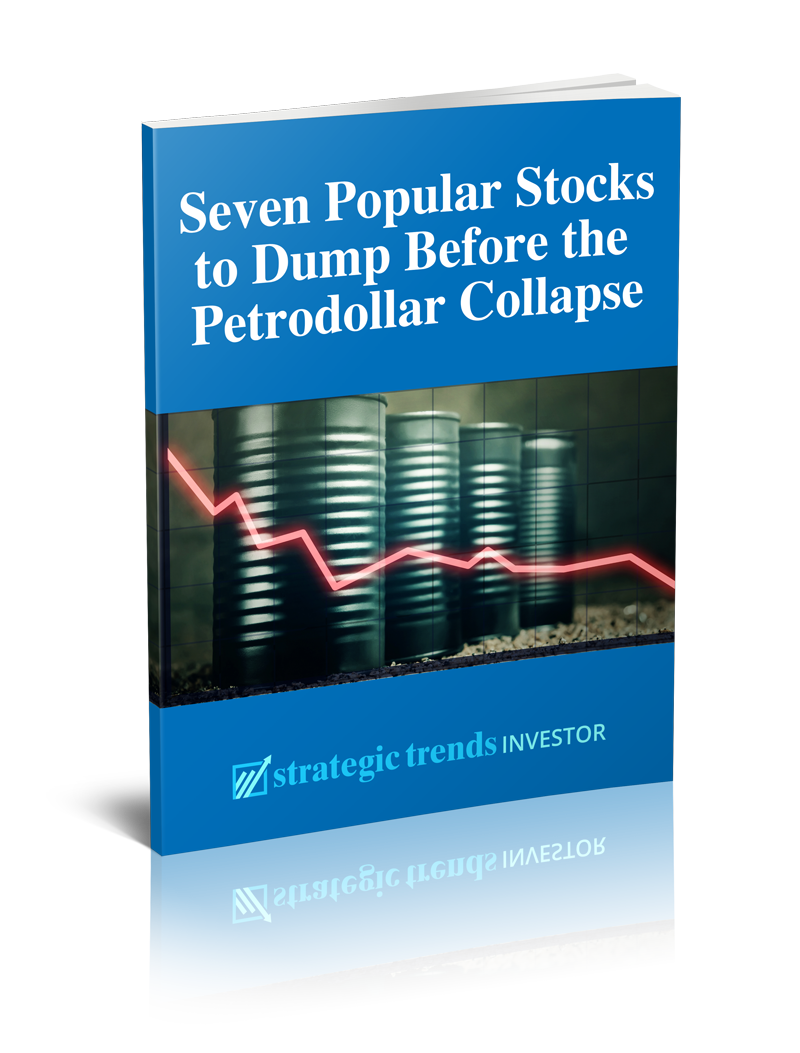 However, I've done some digging around and have some insight into the stocks being teased.

And that's all I'm able to expose. For the other stocks 3-7 there isn't really any information provided for me to go off of.

Stage 2: Make Money With These Safe Investments Instead

With every crisis there is opportunity, and stage 2 is all about investing in the right stocks.

There are 3 particular stocks he thinks should be bought right now, one of them is in the gold mining industry, another is an airline company, and the last is a trucking company.

And, just like before, in order to get more information on these companies you would normally have to get the report, Three Ways to Prosper From the Rise of the Petroyuan... which you would have to subscribe to Strategic Trends Investor to get... 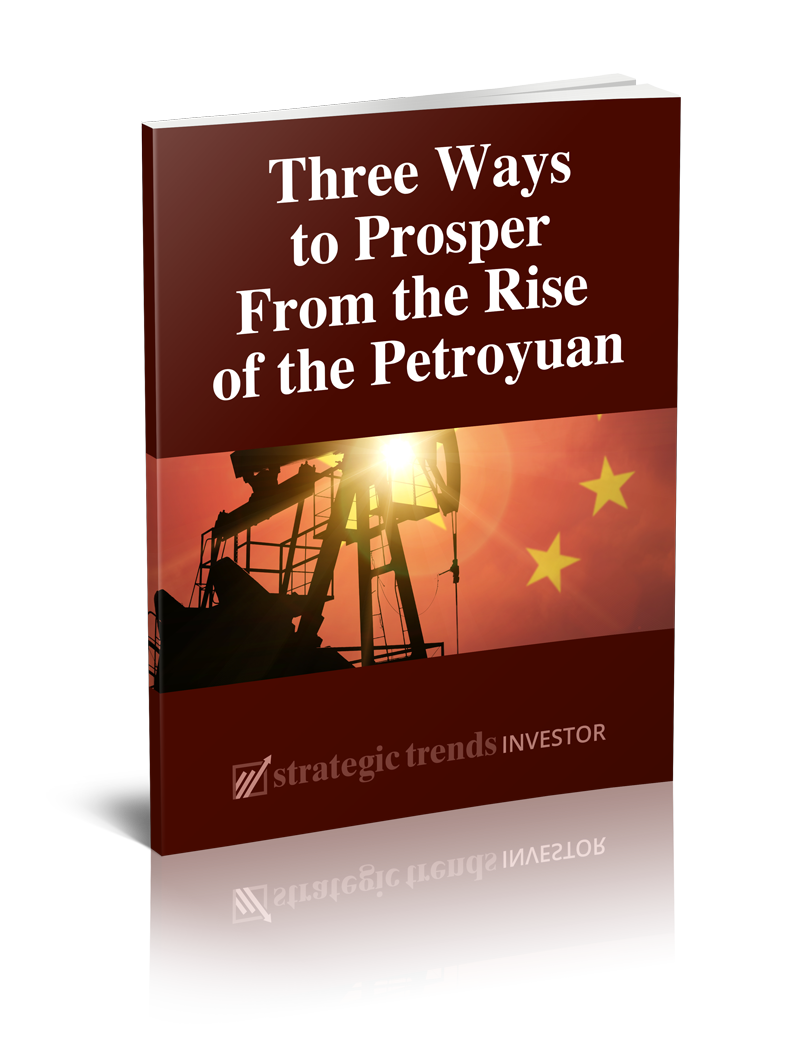 And also, just like last time, I've done some digging around and was able to find out the companies being teased here so that you don't have to subscribe just to learn more.

And lastly, in Stage 3, he recommends buying one particular stock that he thinks will explode in price, telling us that this stock could surge 695% easily from the shift to the petroyuan.

What we are told is limited:

We aren't told anything else, so I can't even begin to try to figure this one out, unfortunately.

The details of this stock are laid out in his One Major Winner in the Coming U.S.-China Money Shift... 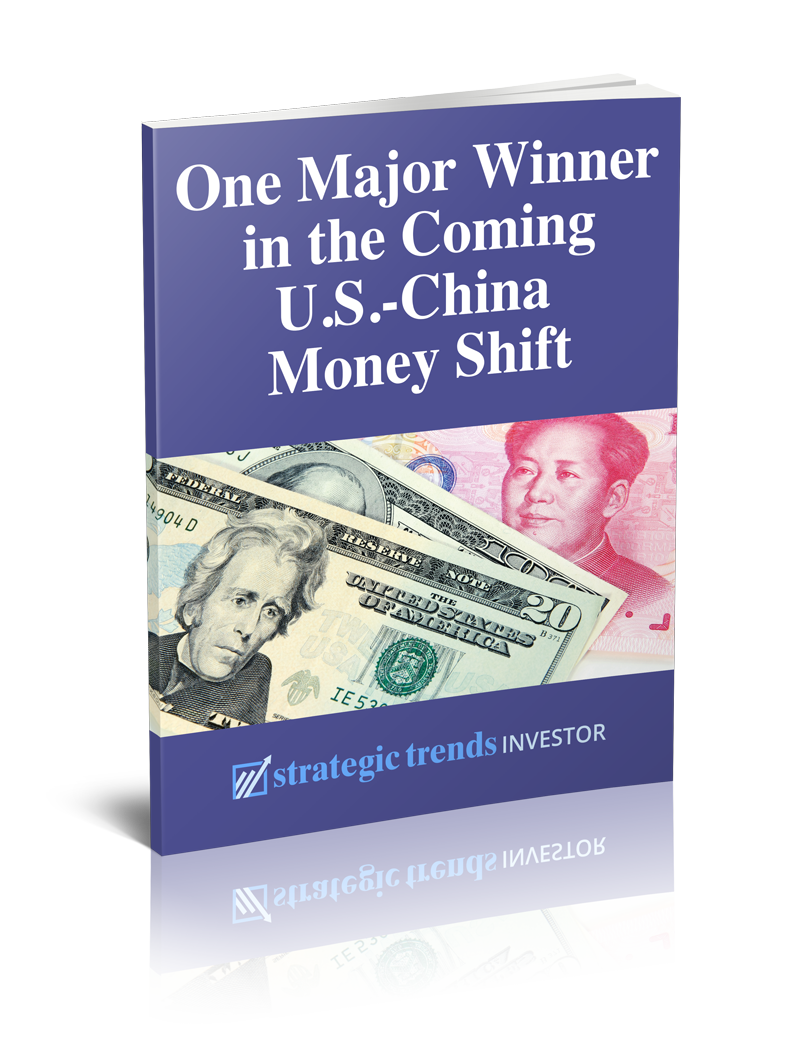 And as I've mentioned, in order to get all of these reports you have to subscribe to Strategic Investor, so I think it's worth touching on what this actually is for a minute...

What Is Strategic Trends Investor? 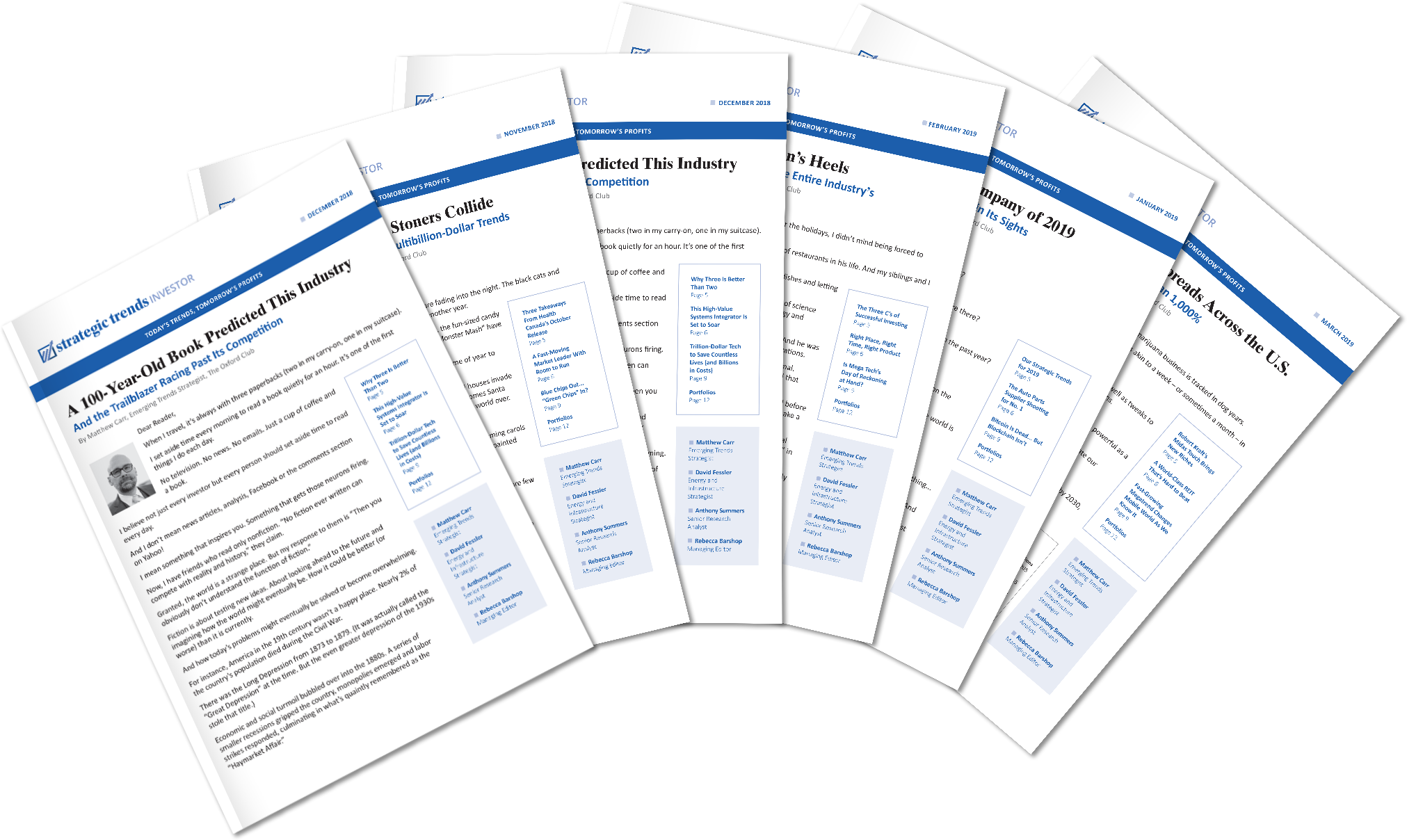 Strategic Trends Investor one of The Oxford Club's newsletter advisory services and is ran by Matthew Carr. It's basically a follow-along service where subscribers are provided actionable investment recommendations on an ongoing basis.

Here's a breakdown of what subscribers get:

This service is all about trends, and right now some of the biggest trends include things like virtual reality, marijuana, autonomous cars, AI, 5G, etc. It doesn't matter what sector... Matthew Carr looks for trending opportunities and these are the types of recommendations subscribers get here.

The cost to subscribe is $49/yr for the most basic subscription, although you'll be pushed to purchase the $79 "Premium" subscription.

I've done what I can to expose some of the stocks being teased here. Unfortunately I can't expose his #1 stock that he thinks will increase in price by 695% due to lack of information, but hopefully I've provided some value to you as a reader.