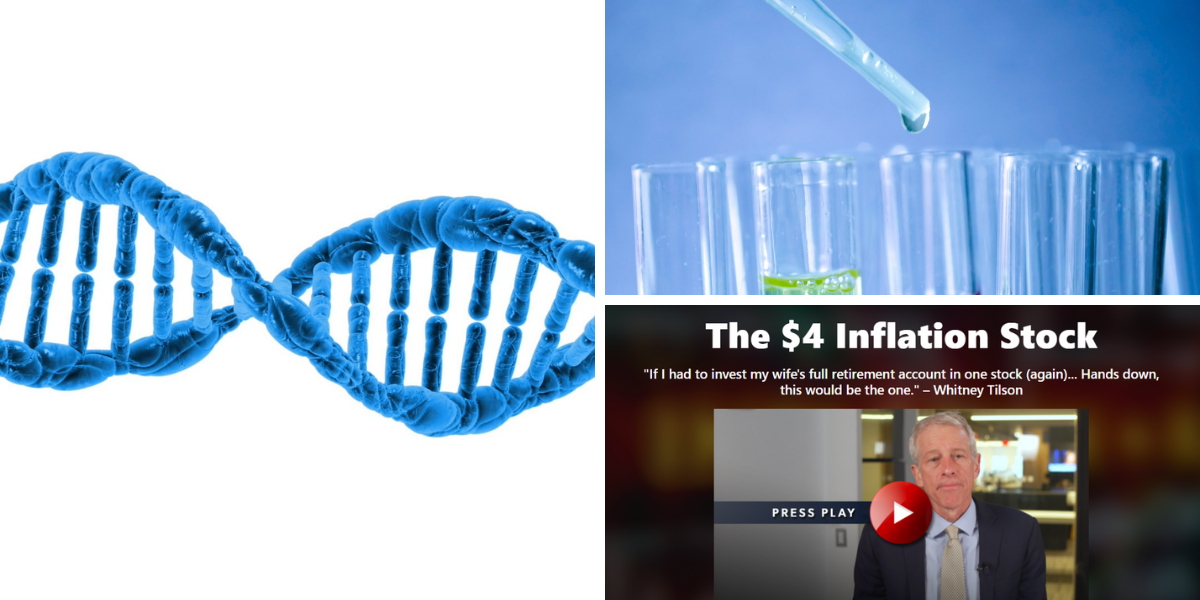 Inflation is roaring  like its the 1970’s and Whitney Tilson is here to show us one stock that could help us beat it by returning 1,000% over the next couple of years.

He calls it The “$4 Inflation Stock” because that’s how little each share costs and because its a market leader in an industry that’s projected to be worth $4 trillion in the coming years.

The presentation begins with Whitney conspicuously telling us that in 1997 he took every penny in his wife’s entire retirement account – with her permission, he assures, and invested the $20,000 into America Online.

Thankfully (prayers up), things worked out and only a year later he was able to cash out of AOL for $120,000. This was before co-founding and co-managing the hedge fund firm Kase Capital (originally T2 Partners) in 1999. Whitney closed the fund down in 2017 after a few years of underperformance and launched Empire Financial Research shortly thereafter in 2019 to provide retail investors with high quality research, like the kind institutions have access to. We have previously reviewed some of Empire Financials’ presentations here, including Tilson’s “Next Big American Monopoly” and Berna Barshay’s “First Mover” ESG Stocks.

Why tell us the AOL story? Because Whitney sees a chance for us to do something similar today.

Back when he bought into AOL, it was also trading for around $4 per share. But much more importantly it possessed the following characteristics:

Well, a similar situation is unfolding right now with a small stock that went public in 2021.

Except unlike AOL, this company’s technology stands to disrupt many more industries than just the Internet.  Whitney repeats the claim that this stock could soar by 1,000% over the next couple of years and over the long term, he can see us “making 25x, 50x, even 100x on our money”. Helping beat back the current surge in inflation and the volatility brought about by rising interest rates.

The best part about this, is that we won’t have to learn any crazy stock market strategies or complex investment methods to take advantage of this play. All we have to do is buy shares of a single stock today, sit back, and watch as demand for this world-changing tech grows exponentially.

If we want to find out everything about this extraordinary stock, which Tilson calls “The Perfect 10 Stock”. We will need to get our hands on a new report called: The $4 Inflation Stock That Could Change Your Life.

This special report along with two other bonus reports are ours if we start a no-risk trial subscription to Empire Financials’ latest investment research advisory called Empire Stock Investor. Normally, this would cost a minimum of $199 per year for individuals, but today we can get started with a trial subscription for more than 75% OFF, so just $49 for the next full year.

What is The Most Advanced Technology on The Planet?

Prior to his passing in 2011, Apple founder Steve Jobs said that a new era was beginning and that “the biggest innovations of the 21st century will be at the intersection of biology and technology” or synthetic biology (SynBio) for short.

SynBio combines computer science with the most advanced technology on the planet – DNA software, to create new materials, new medicines, new fuels, new products, and more. Tilson recently got the chance to travel across the country to step foot in a fully functioning SynBio lab and after personally getting a glimpse into what this technology can achieve, he’s convinced that it’s one of the keys to the coming fourth industrial revolution.

Building on the third industrial revolution which brought us computers and digitalization, the fourth iteration will be all about using DNA software to create better medicines, semiconductor chips, and almost every other product we need and use.

Here’s an example Whitney uses in his presentation. Take E. coli bacteria, which lives in our gut and sometimes causes food poisoning. By altering the code in its DNA, scientists at Harvard and John Hopkins were able to convert the bacteria into a biodegradable plastic. Thus by taking one cell of E-coli from nature, and changing its code, they made growing unlimited quantities of the altered E-coli to create good, clean plastic that does not harm nature possible.

What’s more, because it’s fully automated, we get a perfect result time after time, without any human error whatsoever. No wonder Steve Jobs pinpointed this industry as the biggest innovation of our times.

The $4 stock that Whitney wants to share with us is at the forefront of the SynBio industry and its a “Perfect 10 Stock” according to his checklist:

Before we know it, this obscure company could become the most sought-after stock on the planet and its share price could double, 4X, 25X, even 100X, leaving inflation in the dust. Let’s find out what it is.

There’s a lot of info to digest here so let’s dive right in:

Based on the generous amount of clues provided we were able to pinpoint the exact company in question here – Ginkgo Bioworks Holdings Inc. (NYSE: DNA). This is how we know:

Ginkgo Bioworks has a lot of potential and its aim to make biology as programmable as a computer is ambitious if nothing else. But is its DNA-as-Code approach enough to make it a good long-term investment?

For starters, even as a non-biologist that never paid much attention in high school science class, boiling DNA down to deterministic code sounds and is overly simplistic. Secondly, cost-effectively manufacturing synthetic molecules at scale is proving a challenge, as its larger than expected loss in the first quarter of the fiscal year 2022 proved.

Lastly, Ginkgo is not alone in attempting to use the most advanced technology on the planet – DNA, to create better products. Other SynBio companies like Zymergen Inc. (Nasdaq: ZY) are at least equal to its capabilities.

For these reasons, Ginkgo Bioworks should be viewed as an intelligent speculation rather than a sure-fire investment, at least for the time being.

Do you agree with the statement that “the biggest innovations of the 21st century will be at the intersection of biology and technology”? Tell us why or why not in the comment section below.