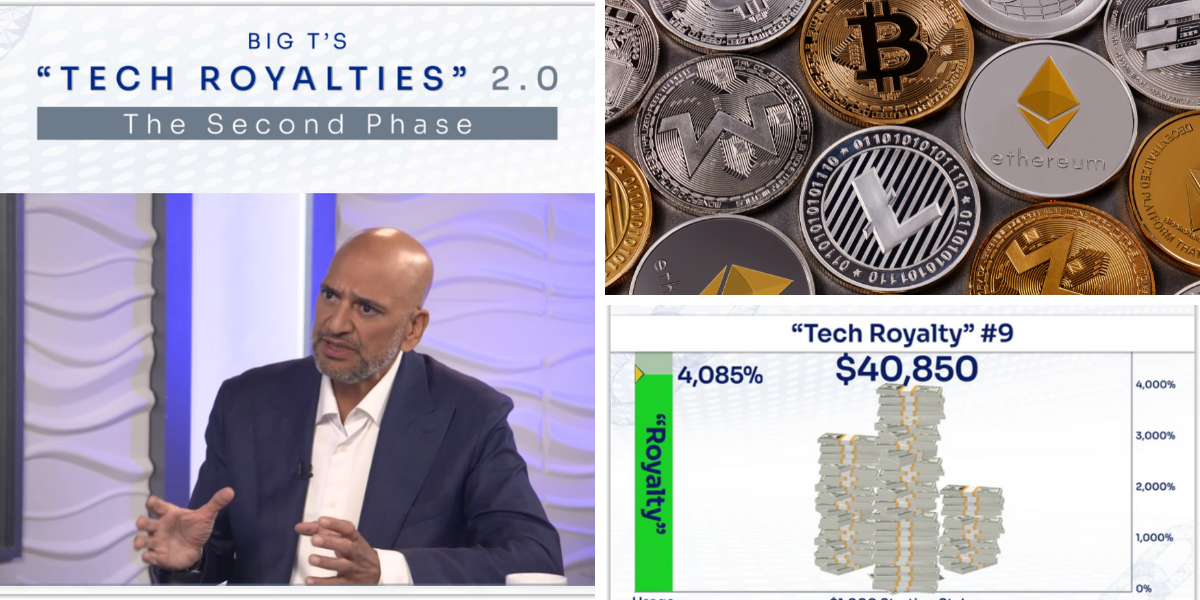 If you're looking for Teeka Tiwari's "Tech Royalty 2.0" picks then you're in the right place.

We've been getting quite a few questions about these and so I've finally decided to write up this review, luckily being able to reveal all 6 of his crypto picks.

But before we jump into that, let's go over what exactly Teeka is teasing us with.

Teeka Tiwari is joined by John Burke in an interview-like presentation that seems like it's never going to end.

This thing goes on for about 2 hours and is enough to make even the most patient of people start to lose their mind.

It all has to do with what Teeka is calling "tech royalties" and "the second phase".

*Note: This is all about Teeka's "Tech Royalties 2.0" pitch, which is his latest. He has also teased tech royalties in the past, which I've reviewed, but has since released a newer batch of crypto recommendations in this area. 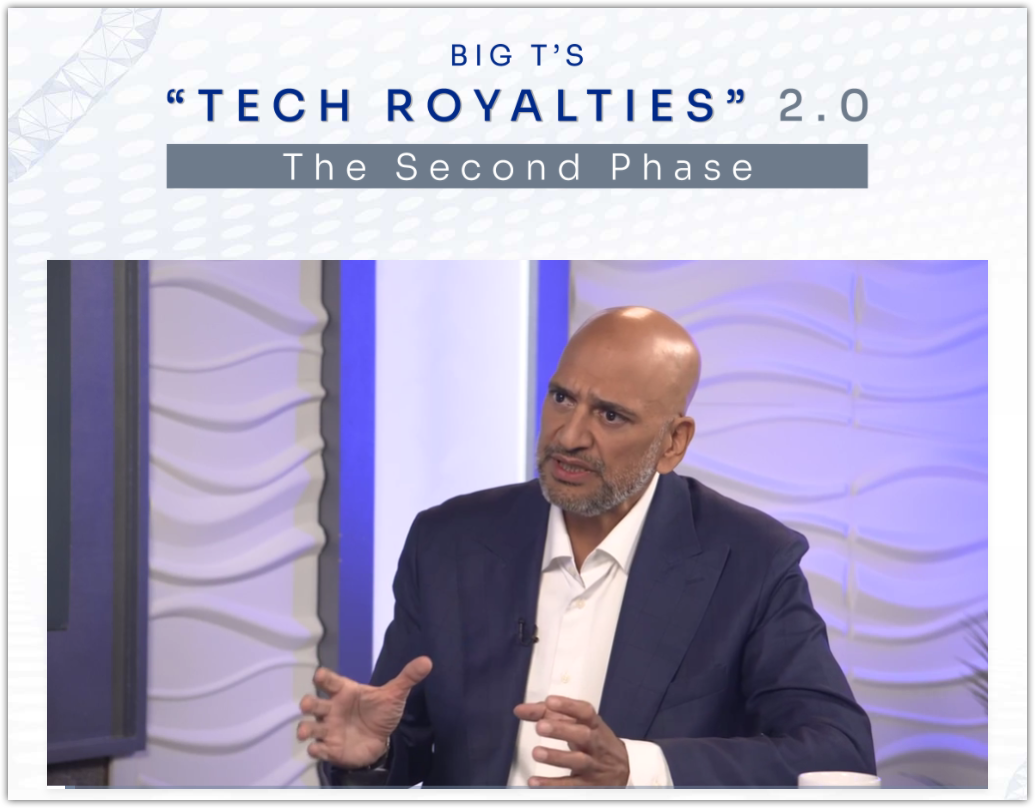 They call him the "number 1 crypto analyst in the world", and although I thought that this just used to be a self-proclamation, it turns out that somewhere along the line he actually was called this.

Anyways, a bit of background. Teeka is an ex-Wall Street hedge fund manager that got his start in the financial world working at Lehman Brothers when he was just 18 and later became the youngest VP ever at Shearson Lehman. He used to publish conservative blue-chip stock investment newsletters, but has since made a switch and now spends much of his time covering crypto investing.

Teeka claims this "tech royalties 2.0" opportunity is still very early... even earlier than when he recommended Bitcoin back in 2016 before even the first crypto boom.

He believes that "what's at stake with 'tech royalties' is nothing less than generational wealth", and he even says that the group of "tech royalties" he's identified...and I quote... "can make you 10 lifetimes worth of wealth" over the next 365 days.

Sounds good to me, but of course you always have to take what Teeka says with a large chunk of rock salt.

The reason he is so excited about this opportunity has to do with a catalyst that's about to make crypto boom like never before thanks to a "second phase". This is something I'll go over in more detail soon.

And, in the marketing fashion typical of these types of investment services, the presentation goes on to show many cherry-picked charts of past coins that have provided extremely handsome returns.

Here is the capital gain from one of his previous "tech royalty" picks... 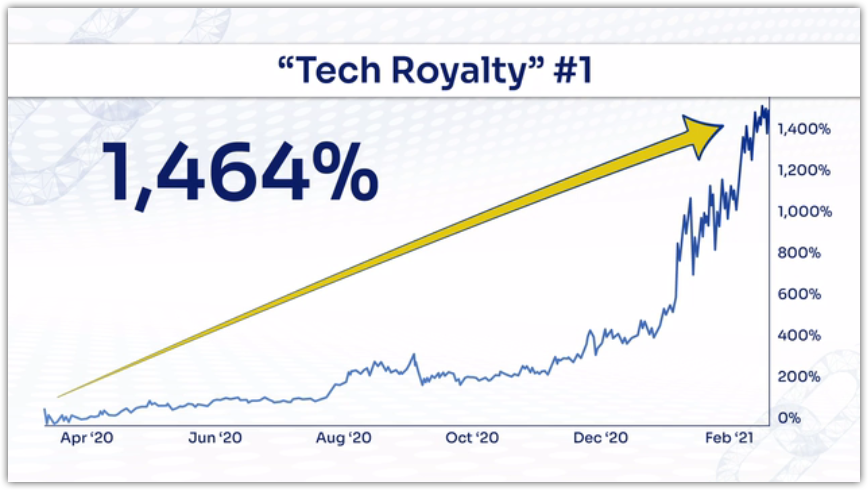 And these are just the capital gains, the appreciation of the coin's price, but in addition to this investors would have also made, for example, $1,410 in "royalties" if they had invested $1,000... 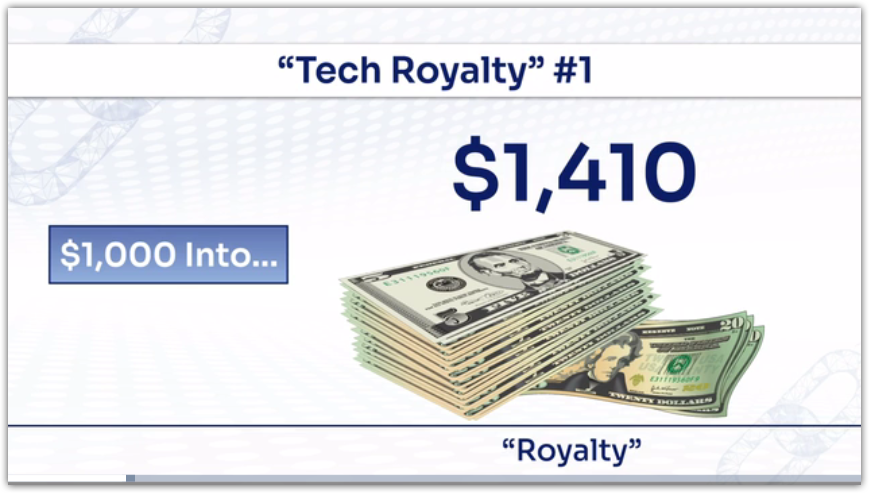 Teeka goes on and on, showing more and more examples of cherry-picked results that you could have made loads of money from.

Here's another example from the presentation where a $1k starting investment could have started paying out over $40k a year in these "royalties"... 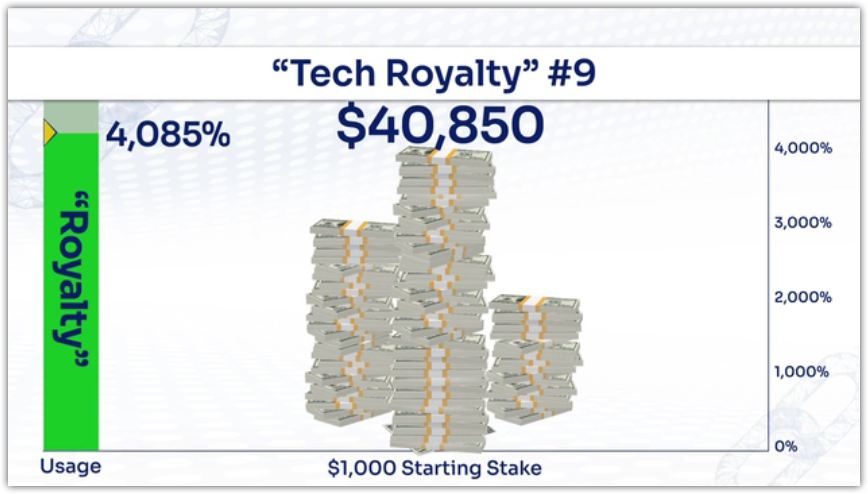 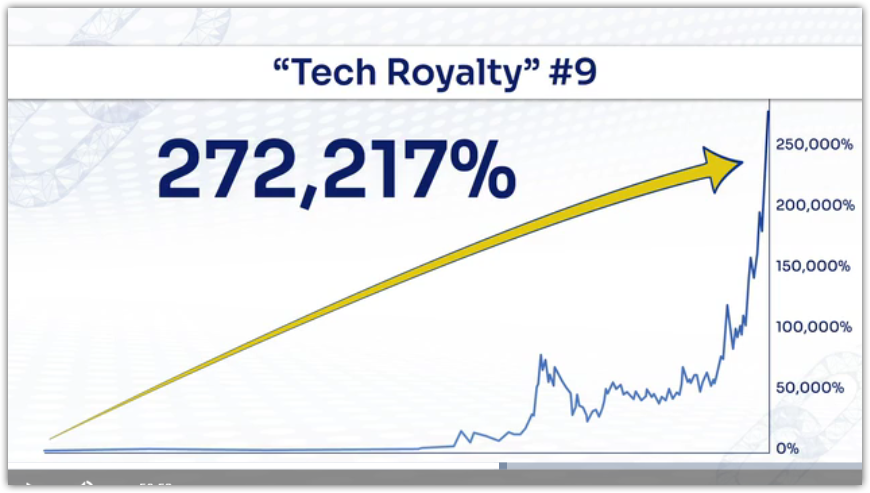 And, as we know, right now we are told that he has found 6 "tech royalties" that he's recommending everyone buy right now.

We're lucky enough to get the first pick, which he calls his "#1 tech royalty", for free.

This happens to be The Graph (GRT), and I'll go more into detail on this opportunity shortly.

You probably know what happens next.

In order to get the juicy details on his other picks, you'd have to get your hands on that report of his, "Teeka's Top Six Tech Royalties for the Second Phase"... 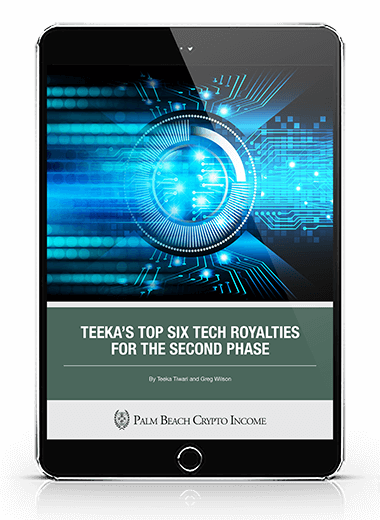 But, in order to get your hands on this report, you'd have to subscribe for a year's worth of his Crypto Income service.

What the Heck are "Tech Royalties"?

Teeka tells us that you get paid simply for owning these "tech royalty" coins.

If you haven't figured it out yet, he's talking about staking rewards.

Crypto staking is the process of locking up crypto coins in a designated crypto wallet to earn interest.

This is possible because many crpytocurrencies use PoS (proof of stake) consensus mechanisms and staking one's cryptocurrency helps to secure the network.

There are different ways to earn staking rewards, but what Teeka suggests through his Crypto Income advisory service is the easiest way, which doesn't require running any fancy computer programs or much at all.

I personally stake cryptocurrencies myself and have reward payments of anywhere from 5% to 20% per year.

But what Teeka really is beating on and on about is the potential to have much higher payments than that thanks to the appreciations of the coins you invest in.

Example: Let's say there's a crypto that pays out 10% reward per year for staking. And let's say that this crypto coin is currently priced at $1.

Now if the price of this coin goes up 10x to be worth $10, then you would effectively be earning 100% per year with the staking rewards you get.

And that's not a crazy example by any means.

He says it's the "rarest event I've ever seen in crypto" and that this event is coded in and is set to only happen once. 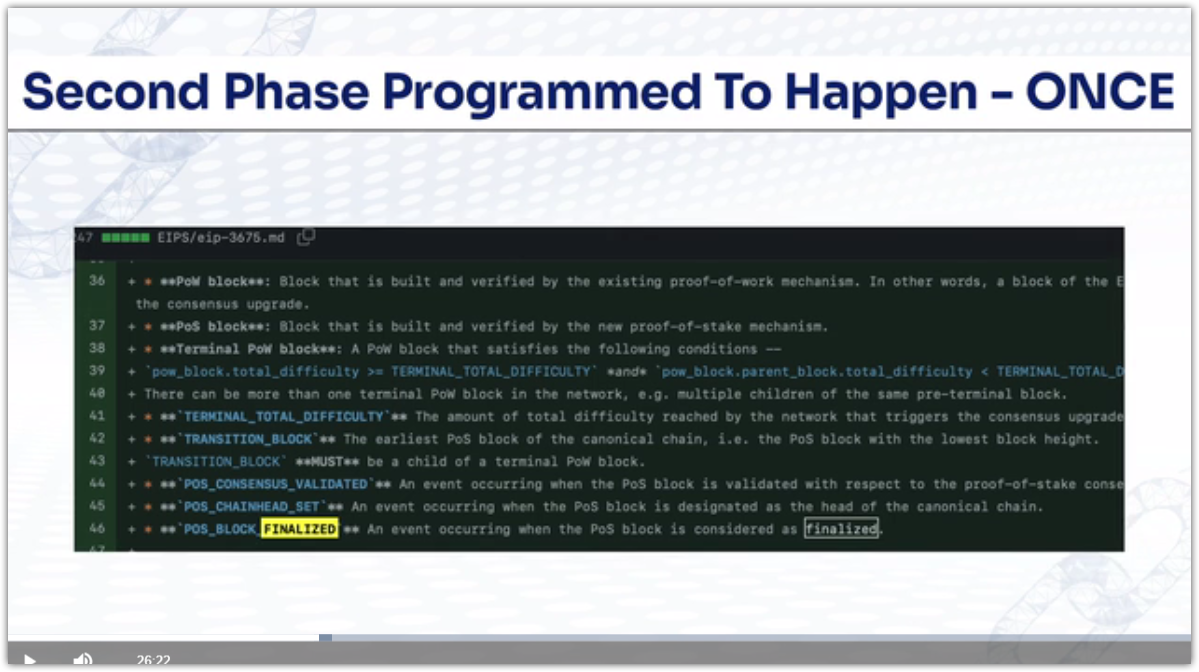 Right now there are around 221 million investors in the crypto market today, but not many of them have had easy access to staking opportunities - less than 2% according to what Teeka says.

The code change shown above is supposedly going to change all of this.

Luckily for viewers, Teeka actually goes ahead and reveals what the heck he's talking about here.

The event he's talking about is the Ethereum 2.0 upgrade, which should have its 3rd phase rolling out by the beginning of 2022.

Teeka is expecting a lot of increased usage, which will lead to higher "royalty" payments.

I'd agree with this, at least to some extent, although I don't think crypto adoption is going to skyrocket overnight like Teeka seems to think.

Eth 2.0 is going to be a big change. Much faster transaction speeds, efficiency, and scalability are what we're looking at here, as well as a switch to a PoS mechanism.

Many of the problems Ethereum currently has shouldn't be nearly as bad.

Transaction speed has plagued Ethereum for a while now. At the moment it can only handle about 30 a second, but after the upgrade it should be able to handle up to 100,000 a second.

That's a big deal for the 2nd largest crypto by market cap.

This is why Teeka is so excited and this is why he's teasing the heck out of his 6 new "tech royalty 2.0" picks.

Let's expose them shall we?

We already know his first pick...

GRT is the native coin for The Grapht ecosystem, which is a decentralized protocol that indexes and queries blockchain data.

Basically it organizes data for blockchains like Google does for the internet.

This is much needed if we're going to move to "web 3.0", where the internet is blockchain-based and users control their own data instead of being slaves to Facebook, Google, etc.

So that's the free pick Teeka gives us.

What about the rest?

Well, unfortunately we were given exactly ZERO hints in the presentation.

Fortunately, a kind subscriber left a comment on Stock Gumshoe that I was able to find exposing his other picks:

Let's talk a bit about each.

We already know how bullish Teeka is on Eth 2.0 being rolled out in early 2022.

This is when it will switch over to a PoS (proof of stake) mechanism. And if you remember from above, a PoS mechanism is what's needed to earn staking rewards.

However, Ethereum has already went through "partial" upgrades and it is already able to be staked for rewards. It's just that the complete revamp hasn't happened yet.

MATIC is the coin that is native to Polygon, which provides layer-2 solutions via sidechains to allow Ethereum to scale more.

This is also a "hyperboom catch up coin" pick of Teeka's.

It's all about helping with Ethereum scalability, which is great, but how important it will remain after Eth 2.0 rolls out is still unknown.

Teeka is extremely bullish on it, however.

Avalanche consists of a network of many blockchains (subnets) so that it is easily scalable, with the goal of being a digital assets exchange.

It's similar to ethereum in a way too, because users can create their own decentralized applications, giving it the name of the "potential Ethereum killer".

The Fantom project, that FTM is the native coin for, is basically a smart contract platform for digital assets and decentralized apps.

It's a layer 1 blockchain with good scalability and low transaction fees.

This is an interesting project that provides decentralized video streaming services.

Basically, it's a protocol (Ethereum-based) that "distributes video transcoding work throughout its decentralized network".

What this means is that users can contribute unused computing power to the network to help process videos.

*If anyone can confirm these crypto picks it would be greatly appreciated!*

While I am generally bullish on crypto and participate in crypto staking opportunities myself, I certainly wouldn't count on striking it rich like Teeka leads one to believe they will.

But I guess this depends on how much a "lifetime" worth of wealth is to you.

While Teeka likes to hype the heck out of all of his picks in an attempt to lure in as many subscribers as possible, his crypto-focused investment services have generally performed pretty well.

And, I do like what I see with this group of "tech royalty 2.0" picks.

Just don't expect to be buying a mansion and private yacht within the next year, that's all.

He things it will bring investors returns of over 9,000%.

However, as I wrote in the article exposing his "hyperboom catch up coins", which included Polygon (MATIC)...

Consider this: Polygon (matic) has 10 billion tokens. So if it were to hit $10 a coin, then the market cap would have to be $100 billion.

Sure, it's possible, but I'm just saying that even for a 5x return on this investment it's going to require quite a lot."

If we're all really going to earn "10 lifetimes worth of wealth" within the next year, then we are going to have to see huge capital gains from these coins on top of the staking rewards they pay out.

I hope this review has been of value to you. As always, let us know what you think of these picks in the comment section below!