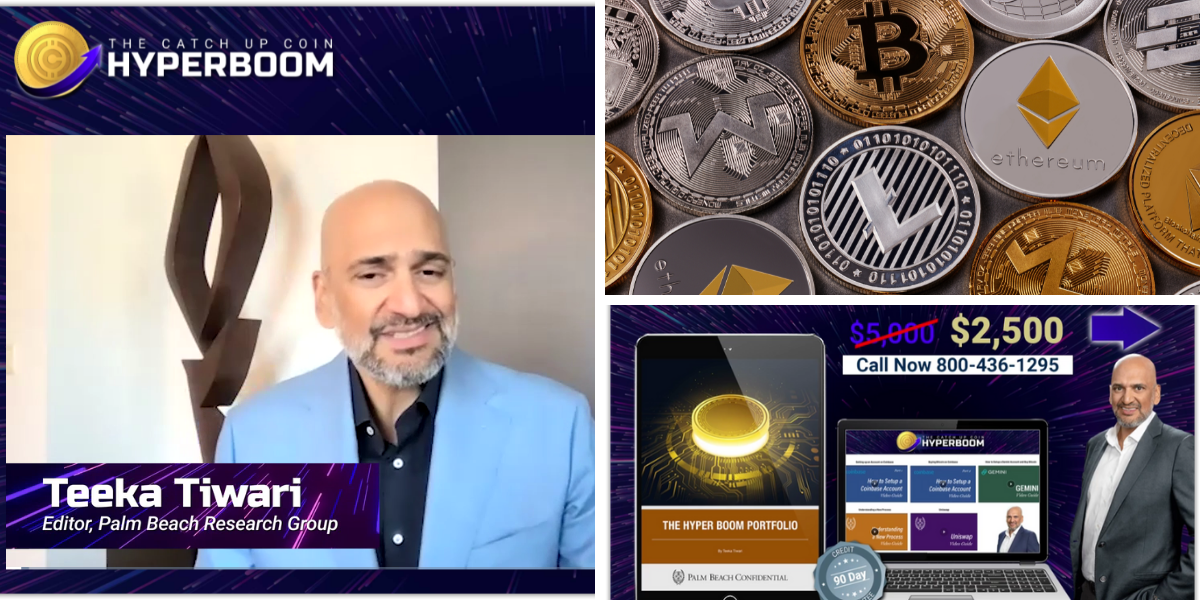 Teeka Tiwari is back at it, and this time he's teasing us with the opportunity to invest in what he calls "Catch Up Coins".

But these aren't any ordinary "catch up coins".

He's teased "catch up coins" in the past, but has recently put together a new portfolio for a brand new handful of cryptocurrency picks that he expects to explode higher in price thanks to what he's calling a "hyperboom".

Teeka claims that nothing is more profitable than these "catch up coins" and that just "one catch up coin alone can represent an entire lifetime of wealth creation".

Let's talk about the teaser presentation more and then more about what coins he's actually teasing here.

*We'll be exposing all 6 picks for free*

This all has to do with a "rare event" that Teeka's calling "the catch up coin hyperboom".

In the ridiculously long (~2 hour) presentation that I couldn't speed up or skip ahead during, John Burke hosts the event and acts as somewhat of an interviewer for the legend himself... Teeka.

Just a bit of background on the guy: Teeka Tiwari is the self-proclaimed "number 1 crypto analyst in the world", but he didn't start out this way. He started out at the age of 18 working at Lehman Brothers and became the youngest VP ever at Shearson Lehman, just two years later. Then, he ventured out launching his own hedge fund, which I'm guessing either didn't do that well or he just decided to leave in order to focus on the investment advisory subscription business, which he's going full steam ahead with right now.

Regular readers here probably already know him from the "Tech Royalties" teaser and that one on the "New Banking Rule".

Teeka is a leader when it comes to crypto investment information, but is he really the "number 1 crypto analyst in the world"?

Well, I don't even know how you'd measure something like this.

But anyways, back to the teaser...

John Burke, the host, starts off talking about a bunch of people that have supposedly made tons of money from Teeka's recommendations, such as "a struggling farmer from Illinois who was barely making any money from his corn and soybeans, but after following Teeka's work, he was able to turn a few thousand dollars into a $2.5 million fortune."

Then he proceeds to show viewers some of the results from Teeka's past "catch up coin" picks... 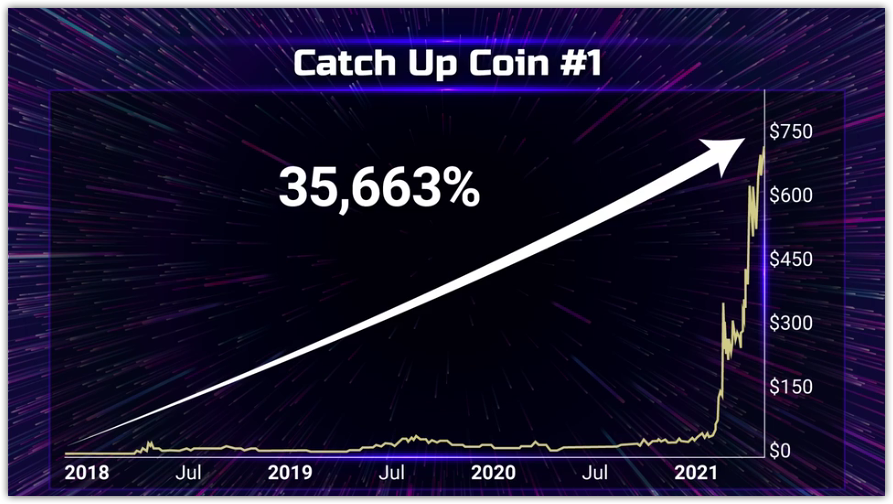 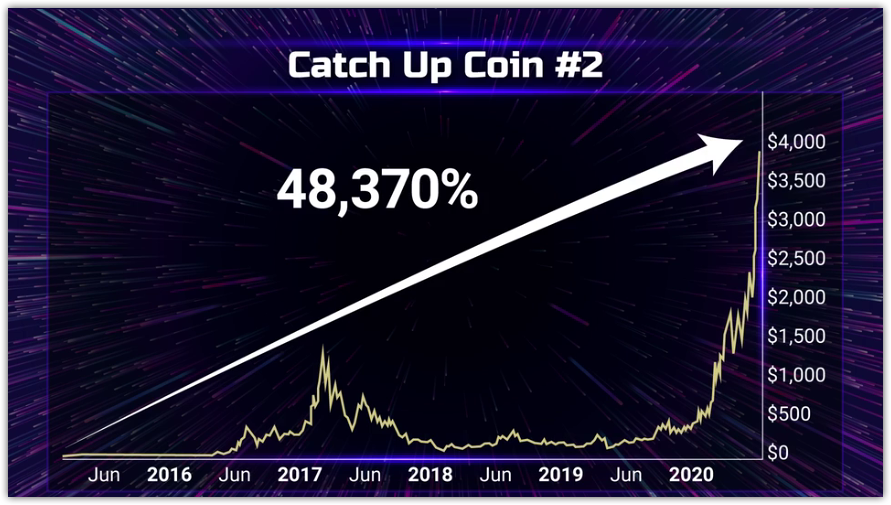 And he even goes on to show an example of a coin that he recommended going up 151,323%.

As I mentioned above, this isn't the first time Teeka has teased "catch up coins".

The most recent teaser is teasing a different handful of "catch up coins" than the first - 6 picks in total.

The best of all... he tells us he will be able to give us the name of his "top catch up coin" for free.

The presentation goes on and on about how if you invest in "the right basket of catch up coins" you can set yourself up for life, often times in less than 10 months.

And of course you need to get in right now.

Teeka tells us that an unprecedented event in the crypto market is starting to happen.

This is what he calls the "hyperboom", and he says he "can guarantee you that no one has ever seen anything like this in the crypto space before".

For each of his six picks he has written up full reports detailing why he's so excited about them and how you can invest in each today. This is all included in "The Hyperboom Portfolio", as he calls it.

BUT, only his first pick is given away for free (well, not really "free" because I did have to wait about 2 hours through the presentation just to hear it).

In order to learn more about his other 5 picks, you'd normally have to purchase a subscription to Palm Beach Confidential, one of his crypto investment advisory services. 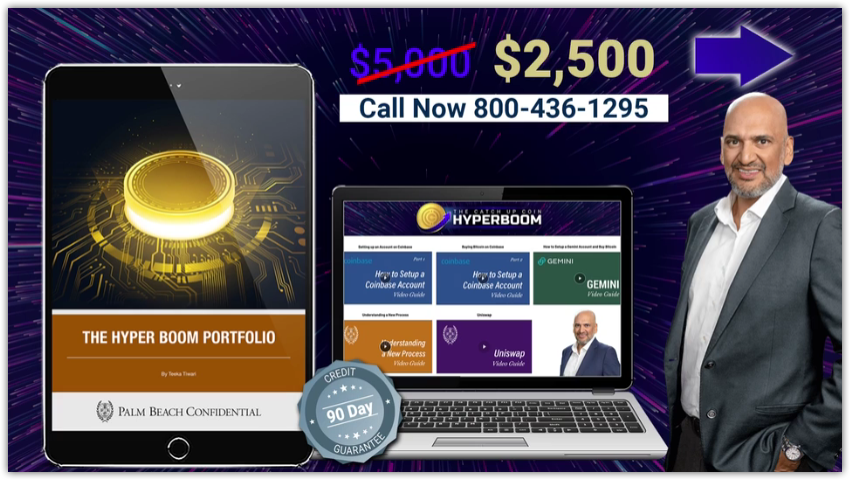 What the heck is this "hyperboom"?

Teeka tells us that the time is now; that the "stars are aligned" for this "hyperboom" to happen.

He also tells us that "my research shows me that the biggest gains... are actually ahead of us".

According to him, there is "about to be an explosion of crypto adoption" and this is what the "hyperboom" is all about... adoption.

This huge uptick in crypto adoption is being propelled forward by news like this... 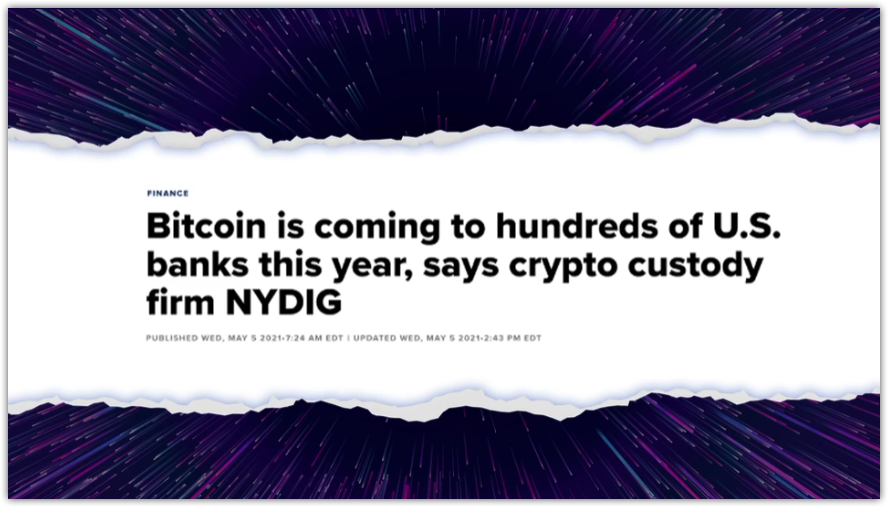 Banks are now really starting to bring crypto into the mainstream, making it easily accessable to people who previously weren't investing because it was just too complicated for them.

Banks have a combined 300 million checking accounts that will be eligible to invest in bitcoin easily. As per a recent Yahoo Finance article, "Big Banks are Going All In on Crypto".

There's definitely a lot of positive growth going on in the crypto space, and Teeka claims that altogether, we could potentially see up to 5 billion new people coming into bitcoin and crypto in general.

These are where his "catch up coins" come into play.

In the presentation Teeka gives an example of the chart shown below for a coin that he recommended in the past.

As you can see, the chart doesn't look that great and most people would have probably avoided buying this coin... 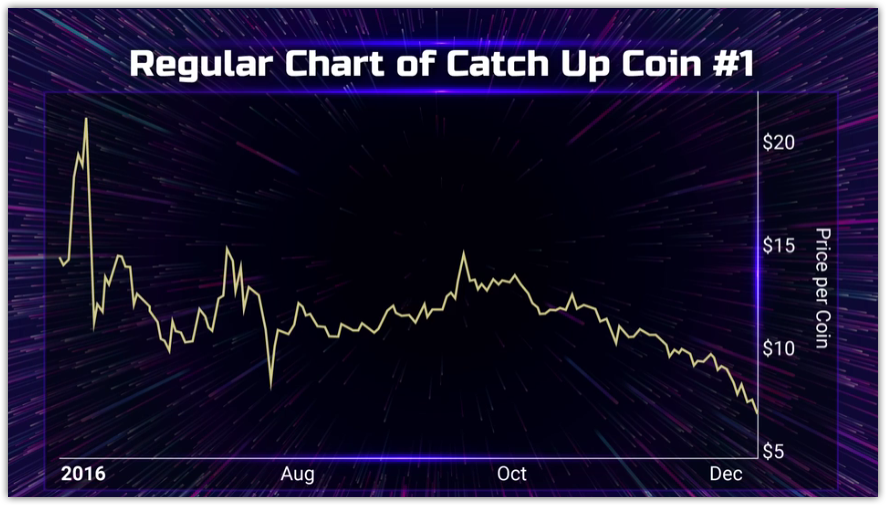 However, Teeka claims to have had access to some "special chart" that "triggered a buy" after the price crossed the green line shown... 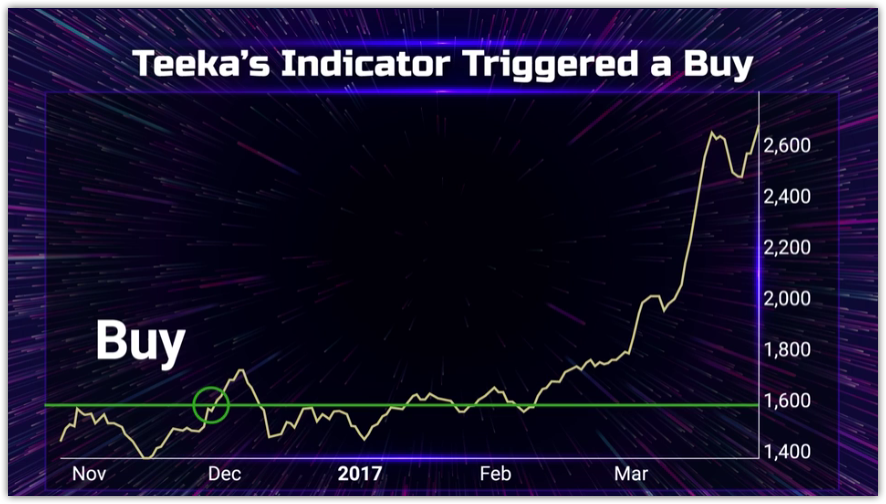 Yes, those two charts are supposedly for the same coin. One is the normal chart and the other is the "special" one that Teeka talks about having access to.

In typical Tiwari marketing fashion, he then goes on to show a bunch of other similar charts, dragging the presentation on and on.

Teeka claims to have been using this indicator for the past 6 years, and it all has to do with measuring the adoption of cryptocurrencies.

His indicator, as he tells us, tracks the usage of different cryptos out there.

He mentions it tracking the usage of crypto wallets, but I'm not sure if this is the way it tracks usage for all the coins he recommends.

As we're told, "catch up coins are usually small, misunderstood projects that have been hammered lower".

This is what we want and this is what he looks for... coins that have prices dropping lower due to bad news and whatnot, yet their usage is increasing.

Usage drives value. So if usage is increasing and price is decreasing, this is just providing us with a more potentially profitable investment opportunity as the price will eventually catch up with the value... which is determined by the usage.

The "catch up coin" portfolio, aka The Hyperboom Portfolio, has 6 coins in it.

Here are the charts shown for each of the 6 coins, showing that the indicator triggered a "buy" recently for all... 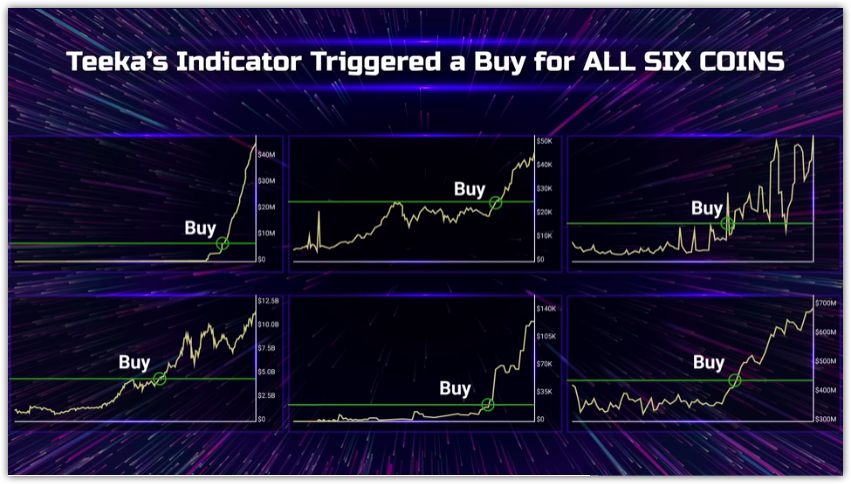 His first "catch up coin" pick he gives us for free.

It's none other than Polygon (matic), which I've luckily already bought some time ago.

Polygon (matic), as teeka tells us, is solving one of ethereum's biggest problems - slow transactions with high fees.

They call it "Ethereum's Internet of Blockchains", and from the official Polygon website:

"Polygon is a protocol and a framework for building and connecting Ethereum-compatible blockchain networks. Aggregating scalable solutions on Ethereum supporting a multi-chain Ethereum ecosystem."

In a nutshell, what Polygon offers is an interoperability layer two scaling solution connecting Ethereum-compatible blockchains, as mentioned above, with the goal of helping bring mass adoption to Ethereum. The "matic" token is what's used for governance, staking and for gas fees via its proof of stake (PoS) consensus mechanism.

So if you're interested in investing here, "matic" is what you'll want to look for.

Unfortunately for us, Teeka gives us absolutely no clues as to what his five other picks are.

Not a single hint is given, so I can't even begin to guess.

UPDATE: After publishing this article I did some more digging around and was able to find someone on Reddit that was nice enough to share all of the coins. 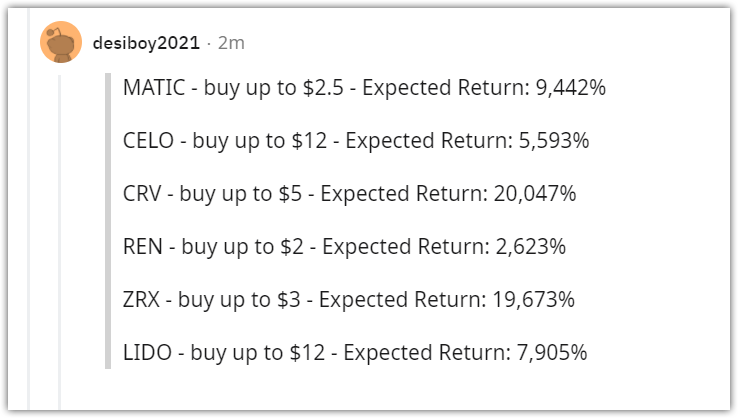 So, just to make things a bit more clear:

If anyone can confirm these picks it would be greatly appreciated.

Opportunity to Become a Millionaire In Less Than 10 Months?

Teeka loves to brag about how many of his "catch up coin" picks have made people millionaires in less than 10 months.

Does this have the same potential?

Well, since we only know the first coin he recommends, we can only speak for this.

And I sure as heck wouldn't expect to become a millionaire from a $1,000 investment here (I'm talking about an investment in his free pick (matic)).

Yes, Ethereum is the second biggest crypto as per market cap. And yes, Ethereum does have a big problem with scalability that Polygon (matic) could help solve (and is already helping solve).

HOWEVER, right now as I'm writing this, Polygon (matic)'s price is at just under $2, and even for it to hit $10 it's going to need one heck of a run.

Consider this: Polygon (matic) has 10 billion tokens. So if it were to hit $10 a coin, then the market cap would have to be $100 billion.

Sure, it's possible, but I'm just saying that even for a 5x return on this investment it's going to require quite a lot.

As is usual, Teeka is extremely bullish on all 6 of these picks.

According to what the Reddit user posted, he's expecting a 9,442% return on Polygon (matic). But I don't know exactly how he's coming up with this number, and from what I see that will take one heck of a lot.

I hope you've found this information useful. It's a bit sad that I couldn't expose the other picks for you, but this is just the way it is.

Take care and be sure to comment down below to let us know what you think of this "hyperboom" and the "catch up coins".