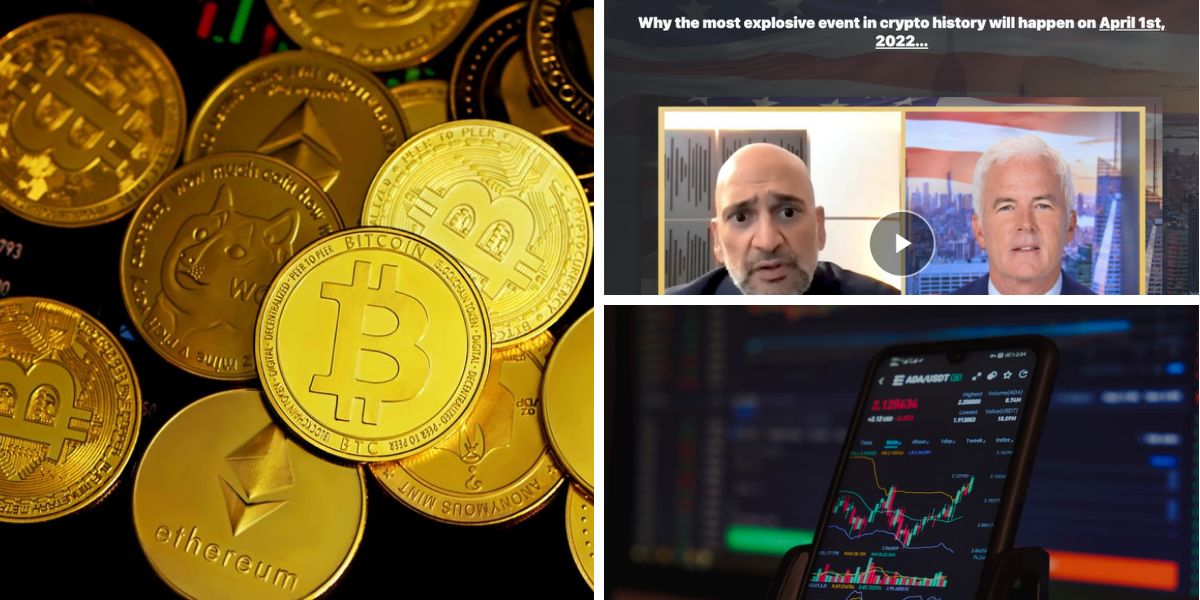 Teeka Tiwari claims that there will be an explosive event in crypto history that’s set to happen shortly. He claims it’s so explosive that he’s already identified seven billionaires participating in this event. And it’s all got to do something with Teeka Tiwari’s “Final Countdown” Picks.

So, what are these “Final Countdown” Picks of his? And why should you consider investing in these, anyway? Moreover, is the event really urgent as Teeka Tiwari makes it out? If you have the same questions and have other ones to ask, let’s all have them answered below. Note: In his teaser, Teeka Tiwari highlights the date when he will reveal the explosive crypto event. Take note that the date keeps on changing.

So, we’re told that Teeka Tiwari has caught wind of what he thinks could be the most profitable event in crypto history. But before moving on to Teeka Tiwari’s teaser, let’s first get to know more about him. In an independent poll, one hundred thirty thousand analysts allegedly vote Teeka Tiwari as the world’s renowned crypto expert.

He also claims to have over thirty years of experience as a former Wall Street VP and hedge fund manager. In 2016, he became the chief editor of Palm Beach Research Group.

It’s also stated that he has shared his various recommendations to more than 600,000 worldwide. He is also best known for recommending both Bitcoin and Ethereum, and both cryptocurrencies have skyrocketed 170x and 480x in value.

And if you’re no stranger to Teeka Tiwari and GBR, you should know that he’s also made other teasers. These include his Third Trillion-Dollar Trade and Final Halving Crypto Picks. Although he may have a seemingly good track record of recommending particular cryptocurrencies, it’s still best to take whatever he says with a grain of salt.

Anyway, let’s go back to his teaser. Teeka Tiwari joins host John Burke in an event called the American Crypto Summit: The Final Countdown. In the mentioned presentation, Teeka states that the “Final Countdown” could be the last opportunity where the biggest potential crypto profits are up for grabs.

Fortunately, Teeka will give out his number one crypto recommendation for free in the broadcast. He believes that this specific cryptocurrency will become much more valuable than Facebook, Amazon, Apple, Microsoft, and Google. And he says this feat is possible once the Final Countdown takes place.

Furthermore, he’s also identified two tiny crypto coins that are bound to benefit the most from this forthcoming event. Teeka claims that these gains are “bigger and faster” than anything you’ve seen this year. And here are more bold claims he presented in his teaser:

Teeka claims that this explosive event in crypto history will take place on April 1, 2022. And he also says that this event is already coded or “hard-wired” into a particular cryptocurrency, which he will later expose for free.

In addition, he also sees four ultimate backdoor profit plays that are expected to have incredible gains from this event. He also mentions that these company picks are playing a critical role in making crypto mainstream.

But of course, he won’t be exposing the two tiny cryptocurrencies or the four companies he teased in his pitch for free. On the other hand, information regarding the four companies laying the groundwork to propel crypto into the mainstream field is found in a separate report. This report is entitled The Final Countdown: Ultimate Backdoor Profit Plays.

To gain access to his picks, you will have to subscribe to his investment service, The Palm Beach Letter. Subscribing to this service costs $49 and includes a sixty-day money-back guarantee. Besides getting your hands on the reports above, you will receive other perks upon subscribing to his service.

These other perks include one-year access to The Palm Beach Letter, Teeka’s complete model portfolio, his Crypto Master Course, and the entirety of his digital vault of financial secrets. You will also get another bonus report entitled The Bitcoin Boost: How to Supercharge Your Crypto Gains With the 1170 Account, professional US-based customer service, and weekly updates and alerts.

Well, What is the Final Countdown All About?

Teeka Tiwari likens his Final Countdown event to a Bitcoin halving. A Bitcoin halving is an event that takes place every four years. In the Bitcoin Halving, block rewards are cut in half, leading to the increase of Bitcoin’s prices.

And later in the presentation, we managed to find out the crypto involved in this so-called explosive crypto event. This crypto is also apparently Teeka’s number one recommendation at the moment. It’s Ethereum (ETH). And in the Final Countdown, Ethereum is expected to have a difficulty bomb that will go off and increase the mining difficulty of Ethereum.

This leads to longer block times and lesser ETH rewards for all Ethereum’s miners. So, after the difficult bomb sets off, it will lead to a supply shock to ETH. From there, the number of new coins mined will be cut by approximately 90%. But with the reduced supply, ETH prices are expected to receive a massive increase.

In addition to everything above, Teeka also states why he’s urging people to take action towards the Final Countdown before it’s too late. Because in the presentation, Teeka talks about five different phases that a particular technology goes through, which refers to as the Adoption Curve:

During the American Crypto Summit broadcast, Teeka says that cryptocurrency is currently in the second phase is set to enter the third phase shortly. Due to that, Teeka wants viewers to ensure that they enter the cryptocurrency market just before it enters the mainstream phase to receive extraordinary gains.

It’s also why he refers to the event as the Final Countdown – it’s apparently a timer counting down to the time crypto hits the mainstream world.

Unfortunately, we couldn’t find concrete clues regarding Teeka Tiwari’s “Final Countdown” Picks. For now, we have no idea what the two tiny cryptocurrencies and the four companies are. But we did manage to find out that an author from Affiliateunguru made guessed one possible company that’s part of Teeka’s four company picks.

In the stated article, the author from the website said guessed that one of the mystery companies must be Bakkt Holdings (BAKKT). Although we don’t have any confirmation regarding the accuracy of this information, this piece of information is still worth sharing. You can read the said article here.

UPDATE MAY, 2022: We’ve just dug up some information on his “two tiny cryptos to own now”, thanks to a comment on Stockgumshoe… According to this person, the picks are Compound (COMP) and 0x (ZRX), both of which can easily be purchased on large exchanges like Coinbase. After further lurking, we found out that the said event’s date used to be December 1, 2021. By looking at just that piece of information, it seems that this teaser is only being continually updated to present a sense of urgency for readers. However, an article posted on Coindesk.com stated that Ethereum’s difficulty bomb has actually been postponed four times since 2015.

And based on other articles, the delayed date hints at the difficulty bomb being set off by June 2022. Moreover, upon reading the linked article above, it seems that ETH’s devs plan to set off the difficulty bomb once their merge takes place, which is something that they deem essential for Ethereum’s 2.0 release.

But according to Teeka’s pitch, the date has been pushed forward. So, instead of the event happening in June 2022, it’s now said to take place by April 1, 2022. So, due to the varying dates, there’s no certainty that the Final Countdown will finally push through the date Teeka mentions in the American Crypto Summit.

More importantly, given the volatility of the crypto market, there’s no guarantee that you can receive life-changing profits if you ever decide to invest in Teeka picks, either. That is if we manage to get a hold of them. And until there’s no certainty regarding the official Final Countdown date, it seems that we’ll all have to wait for further updates.

So, for now, it’s safe to say that crypto’s “mainstream era” is still uncertain. While we wait, let’s hope that we finally have information regarding the two tiny cryptocurrencies, and the four backdoor profit plays by then.