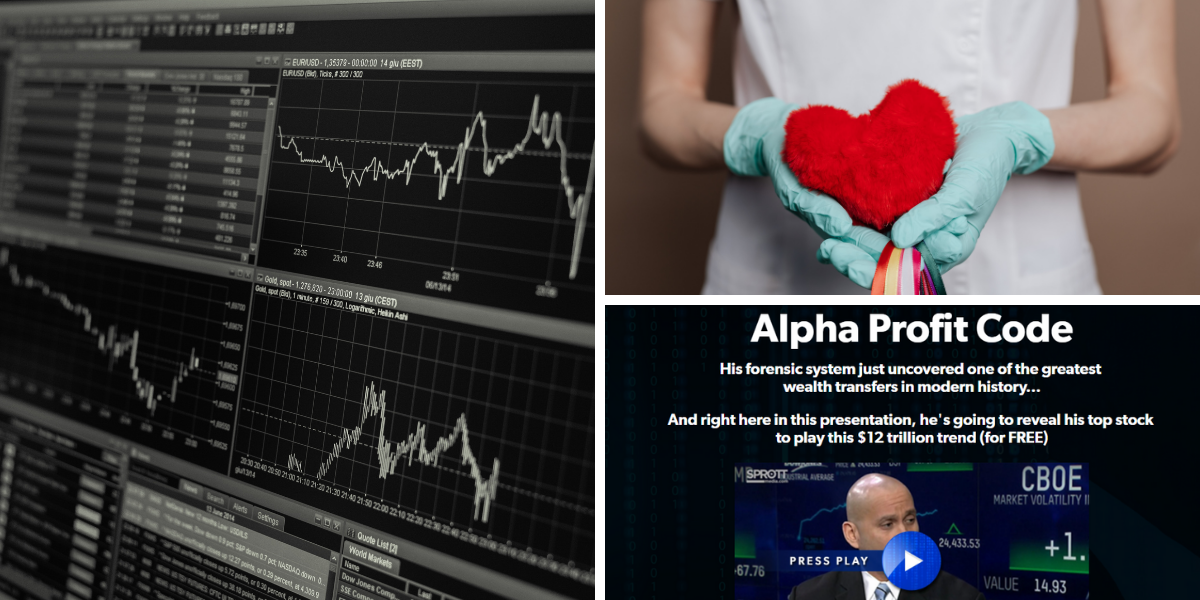 Multimillionaire investor and financial instructor to the FBI, Joel Litman tells us that his forensic system just uncovered one of the greatest wealth transfers in modern history.

He interestingly calls this his “Alpha Profit Code” and confesses that he’s going to reveal his top stock to play this alleged $12 trillion trend (for FREE), later on in this presentation.

Things kick off with the bold proclamation that we’ve just scratched the surface of a brewing revolution that could “make the extraordinary medical advances we’ve already accomplished look like child’s play”. Joel Litman is the President & CEO of Valens Research. He is a forensic accountant by training and has appeared on CNBC, been quoted in Barron’s and Institutional Investor, among others, and also been published in Harvard Business Review. Joel is the co-author of the book, DRIVEN: Business Strategy, Human Actions, and the Creation of Wealth. We have reviewed several of Joel’s presentations here in the past, including his L.O.C.K. System for 1,000% profits and our Hidden Alpha Review.

In yet another bold statement, Joel says “this is arguably the most critical industry on the planet” and could create one of the most extreme wealth transfers in the history of the modern world. For the companies involved, it could mean billions of dollars in pure profit. As for us, he says it could mean a series of 250%, 500%, and even 1,000% gains…in less time than we think.

His forensic background means he may take a slightly different approach to the markets than most. In any case, the style while proprietary can best be defined as quantitative, employing a team of more than 100 accounting analysts in Boston, Chicago, Hong Kong, and the Philippines, who track and analyze more than 25,000 publicly traded stocks. Joel believes this gives him a massive edge over Wall Street when it comes to identifying massive stock market trends before they happen.

We don’t know about a “massive edge”, but there is definitely something to it, as “eight of the 10 richest money managers in the world use his research to guide their portfolios”. It’s this system that he’s shared with audiences at Harvard and Wharton, taught to the U.S. Army, FBI, and the U.S. Department of Defense that he calls the “Alpha Profit Code”.

After running 25,000+ stocks through it recently, Joel uncovered a massive trend that’s currently underway and the “Alpha Profit Code” has identified five stocks that have the potential to be massive winners thanks to the tsunami of cash that’s about to be unleashed. He is even going to share the name and ticker symbol of one of these stocks for free, right here in this presentation.

Before we can get to this, we are informed that we can get the names of all five stocks…if we sign up to Joel’s stock advisory service Hidden Alpha. This would typically cost $199 for a full year, but Joel is slashing the price by 75% and giving us one year of Hidden Alpha for only $49. This includes a 60-day money back guarantee, five special reports – one for each stock he is teasing in this presentation, 12 regular monthly issues, and a new stock recommendation every month – the top big-cap and yet under-the-radar stock in the market.

What the heck is The Alpha Profit Code?

Alpha is a term used in the investment world to describe a strategy’s ability to beat the market or its “edge”.  This is why Joel calls his system the “Alpha Profit Code”. Because it has a long track record of identifying massive winners on a continual basis.

In short, the Alpha Profit Code is Joel Litman’s proprietary stock-picking system. How does it work? As a forensic accountant, Joel doesn’t simply accept numbers at face value. He proves there are discrepancies lingering below the surface. To this extent, he’s identified over 130 flaws and discrepancies in the general accounting standards most American corporations rely on to keep their books. These are the same numbers that Wall Street brokers and so-called “media experts” look at.

When you apply the Alpha Profit Code approach, it corrects every company’s financial reports for all 130 of these general accounting flaws, which changes the numbers and can change the outlook for a stock drastically. The numbers the system reveals uncovers the true picture and that’s how you find hidden gems in the market. It’s also how he’s found huge winners in the past.

Like gym chain Planet Fitness right before it went up 360% However, numbers aren’t the only thing Joel looks at, once the system has narrowed down the list to anywhere from 30 to 200 stocks (out of the thousands that trade on the stock market), he takes a closer look at who’s running the company, what their long-term strategies are, what industries are critical to their growth – the qualitative.

This is how he’s found the five stocks he’s going to give us the scoop on today. Each of which could pay out easy triple-digit gains in the coming months, as one of the greatest industry shake-ups in history comes to a head.

Typically, when Joel and his team run all 25,000+ publicly traded stock through the Alpha Profit Code system, they will get a variety of companies in a variety of sectors. But this time, there was an odd concentration of companies with huge upside that all came from the same $12 trillion industry.

This industry is the $12 trillion healthcare industry and it is being disrupted by the $216 billion health tech industry. Within the next four years, it is projected to hit $657 billion and the driving force behind this growth is: Data.

It’s the companies that supply the data that stand to be the biggest winners out of this entire revolution, which leads us to the first free stock recommendation.

This is a company you have probably heard of already – CVS Health Corp. (NYSE: CVS).

Its the retail pharmacy company with nearly 10,000 locations across the United States. But behind the scenes, the company has put itself in position to become what could be one of the biggest health care data companies in the world within the next few years.

They’ve collected data on over 70 million customers, giving it one of the most complete pictures of our health care data, pitting it in pole position for the future.

As just mentioned, if you want to know how healthy someone is, you need loads of data. The second company the Alpha Profit Code recently uncovered has been providing electronic medical records for the past decade, with 3 million health care providers using their systems each day.

This is Cerner Corp. (Nasdaq: CERN), which is a health records company that manages the data of nearly 250 million patients worldwide.

Having access to all of this data is one thing, but what do you do with it once you have it? This is where the third company that the Alpha Profit Code identified comes in, as they combine all of this collected data and apply advanced analytics to help optimize it.

Right now, they manage 498 million records and they just inked a $925 million deal with two other companies that could help bring their technology to an entirely new level.  Unfortunately, this isn’t enough data to draw any conclusions with, so we weren’t able to uncover this one…on to the next.

With all of this health care data, one of the most powerful things coming to the market is personalized health care. Personalized medicine also has the potential to predict the future, making preventative care possible.

Despite all the data in the world and the technologies that are currently transforming the $12 trillion health care industry, the fact remains, that as people age, they’re going to be spending more time in hospitals. It’s unavoidable. It’s a byproduct of getting older.

There’s one company that’s taking all this newly available data and combining it with hospital care. They already have 185 hospitals and 2,000+ care sites all across the United States. This is HCA Healthcare Inc. (NYSE: HCA).

The Death of Traditional Health Care?

There is little doubt that the system we currently have in place to deliver care is massively flawed.

U.S. News & World Report says that if you went to your local emergency room today, chances are you’d have to wait more than 2 hours just to get a room. This is just to get in, after that, it could take another several hours for a doctor just to show up and tend to you. Thus, it no wonder that many upstarts and even incumbents are attempting to disrupt and upend the health care space.

With that said, looking at all the stocks mentioned above, we don’t think any of them are going to be the ones to take health care into the future, despite being well positioned to do so.

What stocks or innovations will disrupt the health care industry? Tell us what you think in the comment section below.