Teeka Tiwari’s Blockchain Stocks Exposed! – Will They Make You Rich? 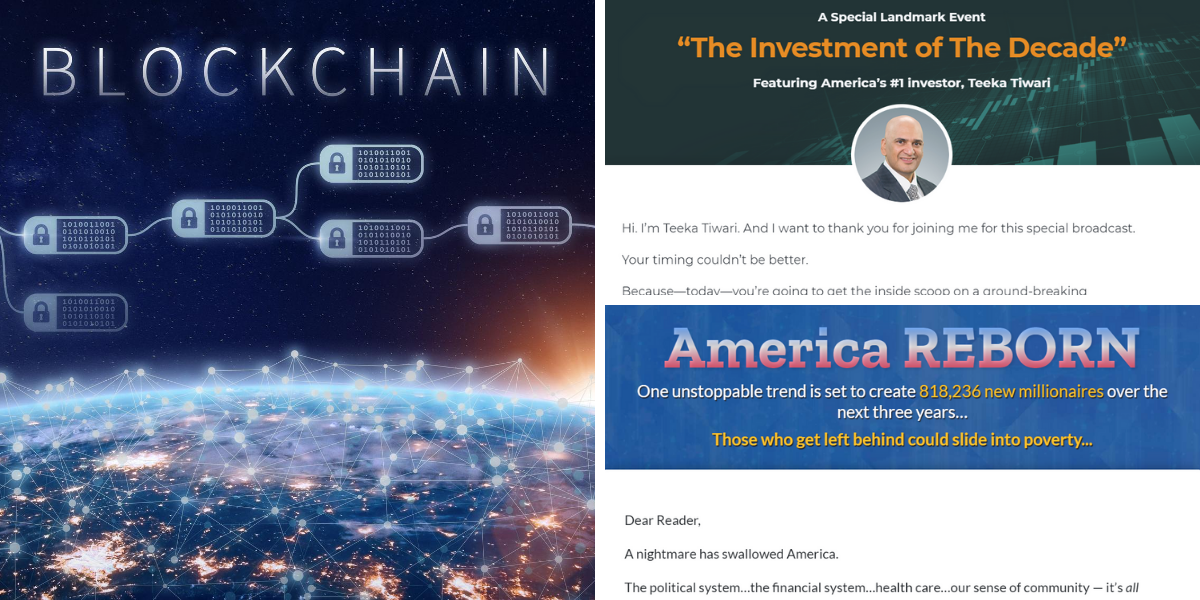 Teeka Tiwari has been teasing blockchain stocks to invest in for quite a while now. They have been receiving a lot of attention and it seems that just about everyone wants to know what these stocks are... without having to pay to buy into his subscription services of course.

Luckily for you, in this short review I'll be exposing some of these blockchain stocks that he's teasing. So you're going to want to read this.

Let's begin by talking about the teasers he has floating around the web.

There are at least two different teasers that I know of, and maybe more out there. 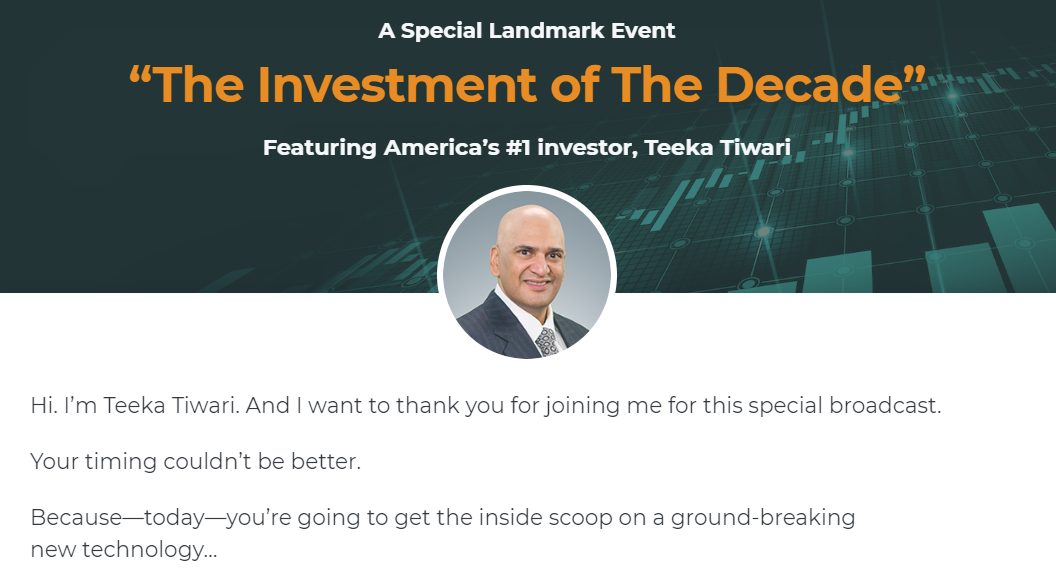 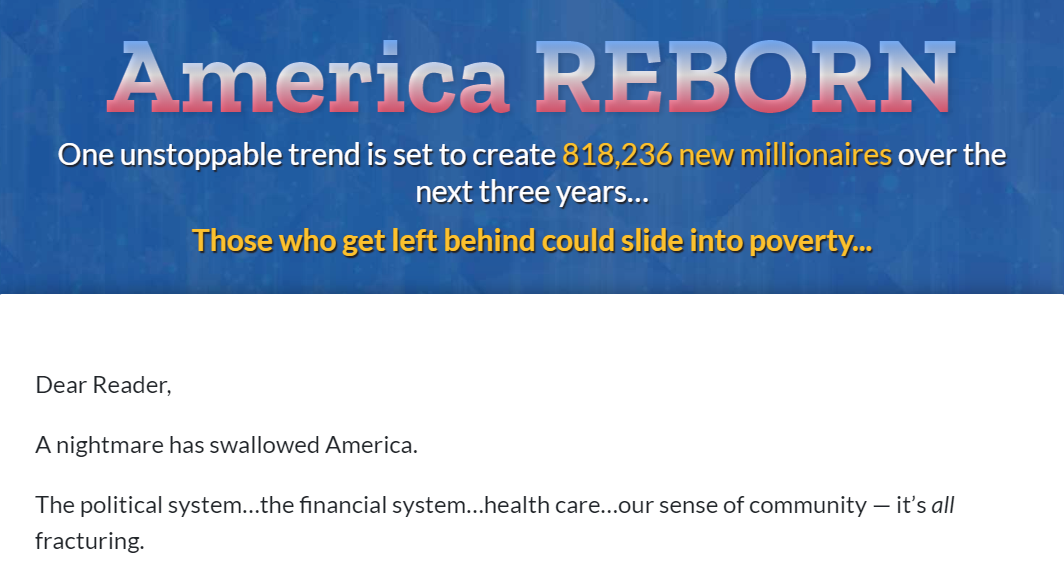 "Investment of The Decade" teaser..

Here he talks about what he calls "genesis" technology and says it is "the most important technology since the internet".

After a long-winded presenation he finally gets around to mentioning that this "genesis" tech he's talking about is actually blockchain - would be nice if he would have just said this from the start.

Teeka says that it's all about investing in the companies that provide the underlying technology, and goes on to give all sorts of examples of stocks that have soared in the past from providing such.

According to him, "you can become a millionaire many times over" by investing in these companies... "and be set up for life".

Sounds good to me! Who wouldn't want to become a millionaire and be "set up for life".

The companies he teases include...

All the details on these companies are provided in a nifty little "free" report titled “The Investment of the Decade: Three Must-Own Stocks that Will Power Blockchain’s 295,000% Revolution”.

And, of course, in order to get your hands on this "free" report you first have to subscribe to the Palm Beach Letter newsletter service that he runs, which is discounted to $49/yr. The good news is that you won't have to though... because I'll just be exposing his stock picks to you in a bit.

In this teaser Teeka says that "at this moment, an historic opportunity stares you in the face" (yes, that's a direct quote, and yes... that is a typo. It should be "a" not "an").

He goes on to talk about how America is breaking down and falling apart, but is also changing for the better thanks to "one revolutionary technology"... which he finally get's around to saying is blockchain after going on and on for what seems like all of eternity.

He says that "you and I must adapt" and those who embrace it and take the right steps "will grow fantastically wealthy".

According to him, America will be reborn stronger than ever into what he calls a "Cryptocracy", and this will bring about a new class of ultra-wealthy people.

He says you need to get in now, and goes on to hype up the opportunity by showing blockchain stocks that have already soared in price - the typical promotional content of these types of teasers.

After a monumental amount of teasing and hyping up the opportunity, the real reason for the promotion is brought to the the surface, which is to sell subscriptions to the Palm Beach Letter just like in the other teaser. All the details on these investment opportunities are provided in a report titled Blockchain Millionaire: How to Turn $675 into $1 Million, but you must take out that credit card of yours and subscribe to his newsletter service to get your hands on it.

*But remember you won't have to buy in because I'll be exposing his picks in a minute.

Who Is Teeka Tiwari? 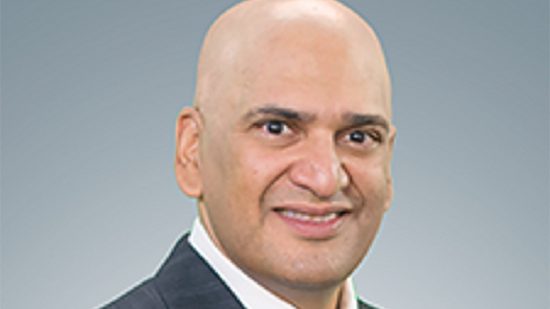 Teeka Tiwari comes from an impressive past on Wall Street, which is after growing up in foster care in the UK. He was supposedly the youngest employee ever (or at least at the time) to have worked for Lehman Brothers as well as to have been vice president of Shearson Lehman. Moving forward he made a lot of money in 1998 during the Asian crisis but ended up hanging onto investments too long and lost just about everything... but was able to rise back to the top and went on to launch a successful hedge fund of his own.

He's been on all sorts of media outlets for his expertise, which leads one to believe he must be legit, but then again you often find comments online about him being a scammer of sorts. Teeka knows his stuff and what he's doing, but the complaints often come from the fact that he's also an incredible salesman and hypes up the different opportunities he's promoting to no-end, which is why you have to take what he says with a giant grain of rock salt, as was evident after reviewing his "Project DeepWave" teaser.

There's a lot to talk about here, so I won't be going into quite as much detail as I normally do on each stock.

Let's break this section up into two parts.

Now don't get too upset here, but this first stock I'm a bit unsure of. The clues given are confusing.

During my research I found some people thinking it might be Overstock with their blockchain-focused venture capital side of the business, but not all the clues match up too well here. tZERO is what Overstock calls the blockchain arm of their business, and one of the main aims of this is to provide a platform where companies can hold ICOs instead of the traditional IPOs, meaning that they can issue tokens to raise capital early on instead of issuing shares on the stock market... and these tokens will be tradable on the tZERO platform.

ICE (Intercontinental Exchange) was another company that seemed to fit the bill in some ways, but insiders certainly don't hold 93% of the company as Teeka tells us... which is a statistic that is hard to believe and is likely twisted in some misleading way.

And then there were the banks Credit Suisse and Société Générale, both of which the SEC has allowed to clear trades using blockchain, but neither of these fit the entire profile either.

And that's all we need to find a positive match here. Square (SQ) is the company being teased.

Square is a payment processing company based out of California. They make both hardware and software for payment processing, with their first product being the Square Reader - a little square device that could be plugged into a mobile phone's audio jack and would accept credit card payments. All the clues match up well here, including Larry Summers joining the Board of Directors back in 2011 and the company providing users of their products to pay and accept Bitcoin.

Any guesses on the company?

It's good old Nvidia, which has been teased a heck of a lot lately and was one of Jeff Brown's "AI Accelerator" stock picks.

Nvidia (NVDA) is a another tech company based out of California. Their main focus is on GPUs (graphics processing units), which are known as being the top-of-the-line. The company actually started out making GPUs specifically for gaming, but has since broadened its focus and now is targeting the AI market.

Honda is partnered with Nvidia and Fidelity does own close to 7.5% of all shares (not exaclty, but close enough)... and any long-time follower of Teeka knows how much he likes this company.

Yep! It's the same stock being teased as was teased in the other "Investment of the Decade" teaser.

Again, this might be for Overstock which has their tZERO exchange platform... but there still aren't any good details provided in the teaser to really figure this out with complete accuracy.

It seems it's another repeat here. Everything matches up with this pick being Nvidia, the GPU hardware maker.

Well, almost everything. Everything besides the misleading claim that "The last time I recommended a stock in this explosive niche, it went on to become the #1 S&P Stock of the Year in 2017. It crushed 499 other companies, soaring 1,065% had you held through 2020." - this makes it sound like it went up 1,065% in the year of 2017 alone, which isn't true at all.

However, the stock chart that was shown for this stock matches up perfectly with Nvidia's, as you can see here... 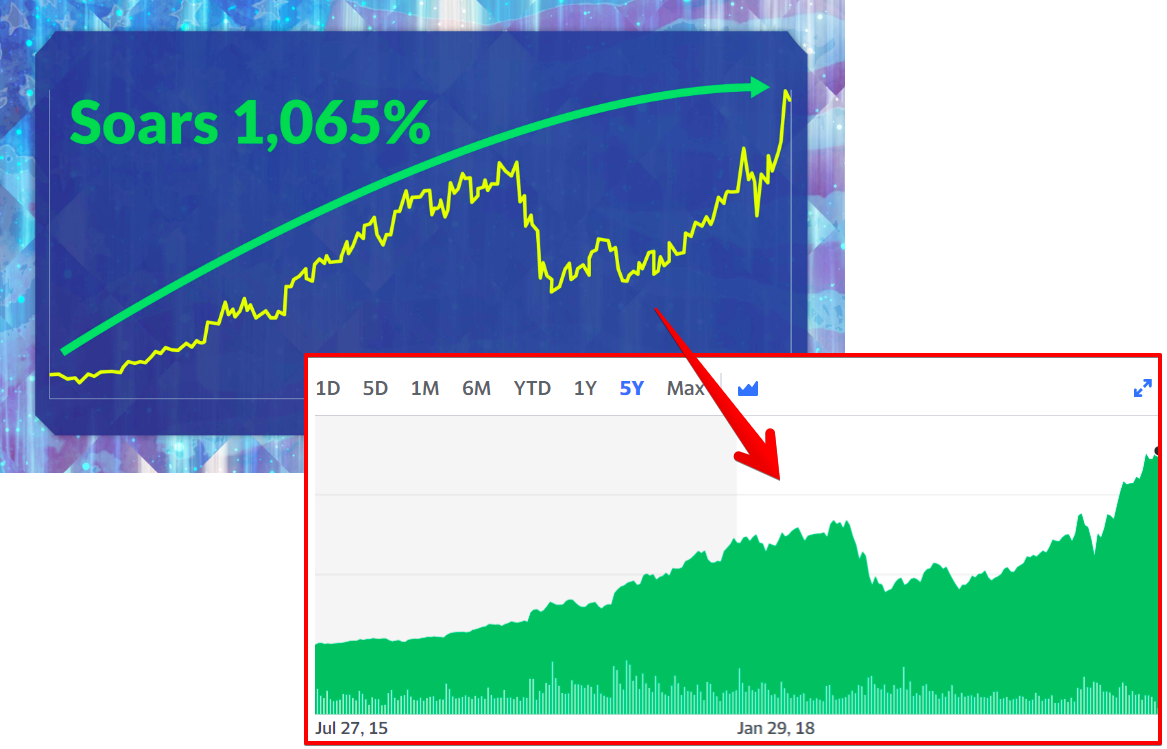 Tiwari also teases several speculative blockchain investment opportunities in this teaser after talking about these two blockchain stocks, but these he provides pretty much no information on... only hyping them up as what seems to be a get-rich-quick opportunity.

So a quick recap here to sum things up:

In Teeka's "Investment of the Decade" teaser he talks about 3 blockchain stocks.

And then in his "America Reborn" teaser he talks about 2 blockchain stocks and some speculative investment opportunities that very little information is provided on.

His 2 stock picks seem to be nothing more than repeats.

Now that we know what the heck he's teasing after deciphering the incredibly hyped-up and misleading presentations... are any of these worth investing in?

I know he makes it seem as if you can buy into these stocks and you'll soon have enough money to retire with enough money to buy a private jet and travel the world, but don't count on that.

None of these companies are tiny enough to give you 10x returns like that, or at least nowhere in the forseeable future.

Overstocks' tZERO project is still small-scale and still not profitable. Nvidia's largest market certainly isn't blockchain, and it actually passed Intel recently as the largest US chip maker based on market cap. And, Square's main focus isn't blockchain either.

If the blockchain industry really does "grow 279,000% in the next few years" as Teeka predicts, this could change everything... but as of right now there's a heck of a lot of speculation in his predictions.

I hope this short review has provided some value to you. I wish I could have found a 100% positive match for that first company, but with the lack of clues I did what I could.

As always, let us know in the comment section below what you think of these picks. We like to hear back from our readers!