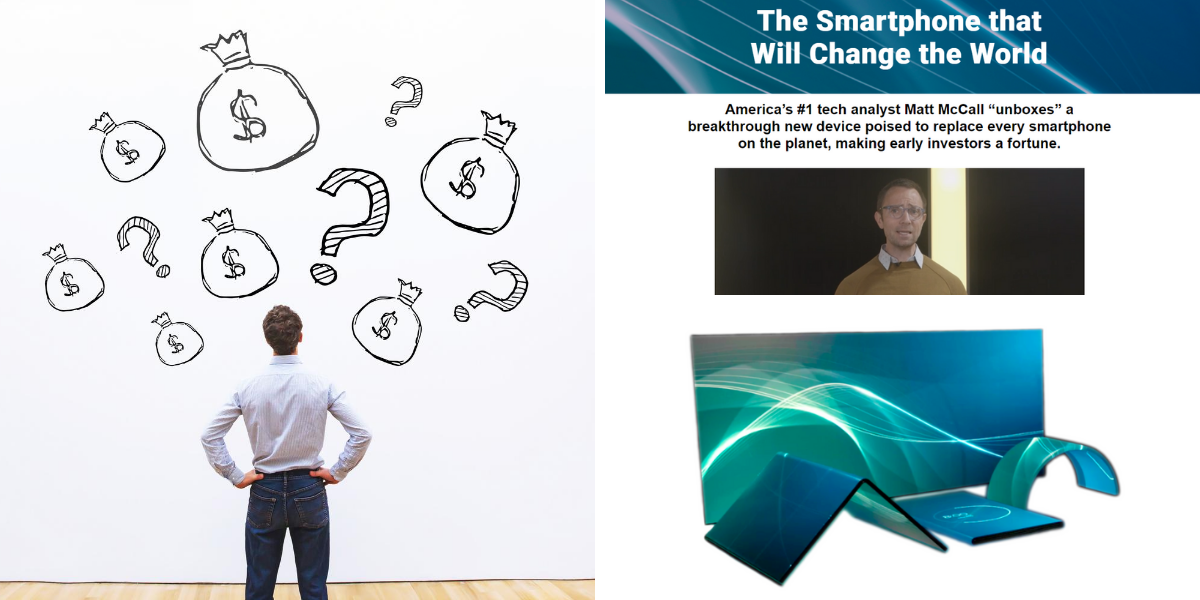 Foldable devices are likely the future and Matt McCall over at Investor Place has been teasing the opportunity to invest in this new technology for the potential of stricking it rich.

He teases one "tiny company" behind the FOLED (Flexible Organic LED) revolution that he thinks everyone should be investing in... and if you're wondering what this company is then you're in the right place.

In this review I'll be going over what's going on here and exposing his FOLED stock pick.

Let's begin with the teaser.

"The Smartphone that Will Change the World"... 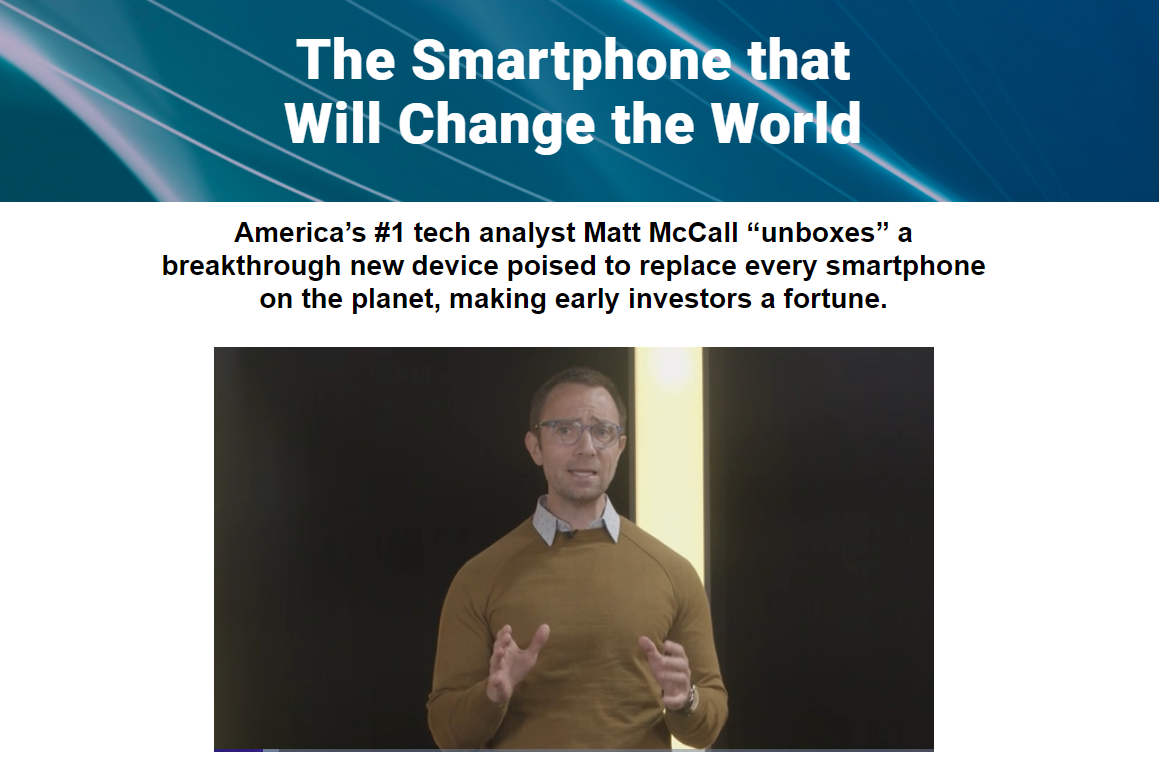 Matt McCall, as we know, is the guy behind it all. He's the chief tech analyst at Investor Place where he runs investment newsletter services. Before all this he started out at Charles Schwab as an account executive and moved on to become a chief technical analyst for Winning. His background is solid and you may have even seen him featured on media outlets like Fox Business for his expertise, but sometimes his investment teasers can still get a bit carried away and misleading, as was evident in his "quantum glass battery" teaser.

In this FOLED stock teaser Matt starts out by putting a smarphone in a blender and destroying it... and then talks about how the new foldable phones that will make modern smartphones seem like dinosaurs.

And of course we aren't talking about going back to flip-phones here... we're talking about foldable devices that can be folded into phones, tablets, smartwatchs, etc... 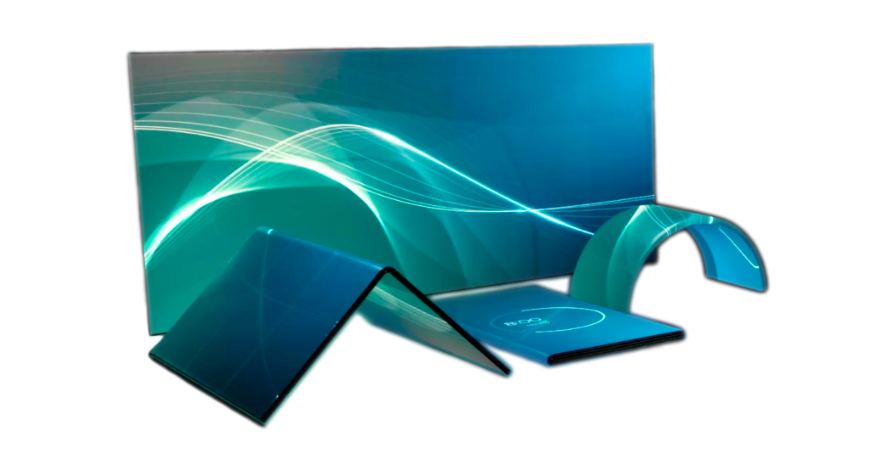 From what we are told, Google, LG, and Huawei have been spending billions on research & development for this new technology.

McCall talks about how Samsung already released their first-generation foldable smartphone, the Samsung Galaxy Fold, and that sales were much higher than predicted.

However, what he doesn't say is that the sales were overestimated by a lot and the actual number of devices sold back during the first release turned out to be a lot less... but still impressive.

The foldable revolution is here and you have to, as Matt McCall puts it, "evolve or die".

Apple is going to be coming out with their foldable phone in the near future, and there are rumors that this is going to be a heck of a lot better than Samsung's.

Some of the more hyped-up claims that come from McCall's lips include:

So should you start searching on Zillow for that new beachfront home you've been wanting to buy? Should you take out a loan to buy that new sportscar with the hopes of being filthy stinkin' rich in the near future?

Well, hold off on this for a second.

McCall's suggestion is to invest in this new foldable screen technology, not in the big phone companies selling the final products.

According to him, there is a "little-known company at the epicenter of the foldable screen revolution".

We are also told that "This company’s stock will take off like a rocket leaving Cape Canaveral".

McCall predicts that its revenue could soar as much as 5,500% in the coming years and send the stock price to the moon, so much so that he claims you "could turn a tiny initial stake into an absolute fortune".

And then after all that hype and excitement... the presentation ended in typical fasion, with the good ol' sales pitch.

Yes, Matt McCall is giving out "free" reports that provide all the details on this company he thinks will make everyone rich. The report is titled The Biggest Smartphone Breakthrough in a Decade: How to Cash In on the Multibillion-Dollar Foldable Revolution... 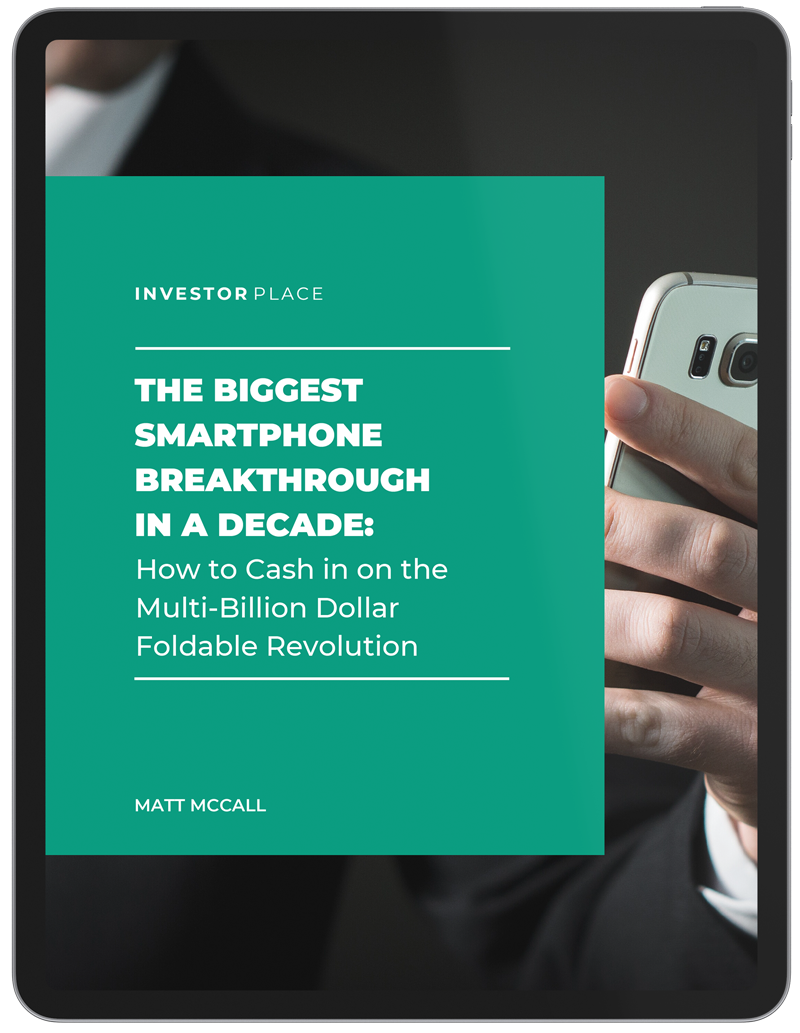 The kicker is that you first have to pay to get this "free" report though.

So is it really free? Well, you can decide on that.

In order to get the free report you'll have to buy into Matt McCall’s Investment Opportunities subscription service - lowest price for a membership is $49/yr.

The good news: Since I'll be exposing his stock pick for free you'll no longer have to buy in.

The FOLED Tech Behind It All

FOLED, or flexible organic light-emitting diode, is a type of organic LED screen "incorporating a flexible plastic substrate on which the electroluminescent organic semiconductor is deposited" - according to Wikipedia.

Here's how Tech Insider breaks things down if you want more details on how it works:

McCall gets a little ahead of himself when he talks about being able to fold a device from a laptop, to a tablet, to a smarphone, and to a smartwatch... because there isn't any product out that can be converted on this type of scale... but I suppose it could potentially be possible in the future.

Also, in case you're wondering how reliable this new tech actually is, well, it's pretty fascinating.

I mean, really, how many times are you going to be able to fold up your smartphone before the screen cracks?

According to Samsung, their first generation Samsung Galaxy Fold can be folded open and closed up to 200,000 times before there are any problems. This equals about 100 opens and closes per day for 5 years... which is impressive and much longer than most people keep a smartphone before being lured into the next new edition anyhow.

There's a heck of a lot of potential here for the mobile phone market, tablet market, smartwatch market, etc... but this tech does have some issues.

The downsides to FOLED tech..

There are two big problems that go hand-in-hand...

Unlike the hard glass screens that unfoldable smartphones have, which don't scratch easily and that you can even add a glass screen protecter to, FOLED screens are made of plastic and are damaged more easily. And not only do they damage more easily, but when they do get damaged and you take them to get repaired, the cost is going to be higher.

That said, companies like Samsung are offering a one-time free repair on their foldable phones, but I can't really imagine this offer being around forever.

The new FOLED tech has a lot of opportunity but there are still a lot of kinks that will need to be worked out before everyone switches over to foldable smartphones and whatnot. But then again, this is the way it always is with new technology and it could be a very good investment opportunity. Of course Matt McCall thinks it is, and he's teasing one stock to invest in to get rich. Let's expose that now...

So, what is the stock that "could turn a tiny initial stake into an absolute fortune"?

What's the name of the company that could make you richer than your wildest dreams?

Here are some of the better clues we were given...

There really aren't too many clues given here, but it seems that McCall's FOLED stock has to be Universal Display (OLED).

Universal Dispay is a OLED (organic light emitting diode) manufacturer based out of New Jersey that was founed in 1994. The company has been working on foldable OLED technology, aka FOLED, and does indeed boast of having over 5,000 patents (issued of pending), not all for FOLED technology however. The clue given about the company having deals with big companies like Samsung, Apple, LG, etc. also matches up.

The only clue that is off was that about its revenue being only $250 million. That said, the teaser is a bit outdated and this makes perfect sense. The teaser came out before the full 2019 revenue results were in, but in 2018 the annual revenue was $247 million... darn close to the $250 million that was mentioned... 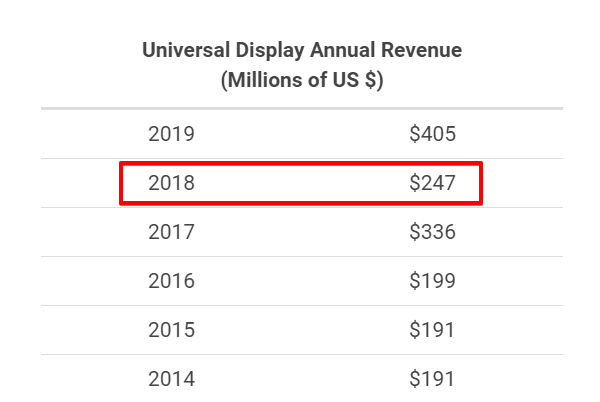 Not many clues... but they all match up well here.

Is It Really That Great of an Investment?

McCall's estimations are that this company's revenue could soar "an earth-shattering 2,460%" if it just captures 10% of the smartphone market... which he claims is a "very conservative" estimate.

Not only that, but if this company captures 10% of the smartphone, tablet, laptop, and wearables markets... "we’re looking at over $13.8 billion in revenue added over the coming years as this company enters its most critical growth phase", which is an increase of 5,500% from its current revenue of $250 million (current at the time).

And of course we know he says early investors could "turn a tiny initial stake into an absolute fortune".

However, let us not forget that FOLED tech has been around for years now and that there are some problems it has hindering its takeover... and that there aren't any devices that can be converted from smartphone to tablet to smartwatch, etc... which would be one heck of an incredible feat if there is ever something like this brought to market.

As usual, the teaser is hyped-up to monumental proportions and McCall is full of speculation.

FOLED tech has a lot of potential and Universal Display is positioned well with its impressive patent portfolio, but don't count on this being a guaranteed fortune-maker.

Hopefully this review has helped you out some!

As always, let us know what you think of this stock pick? Will it really make investors a fortune? Should you start looking for a beach-front vacation home to purchase? We like to hear back from our readers!