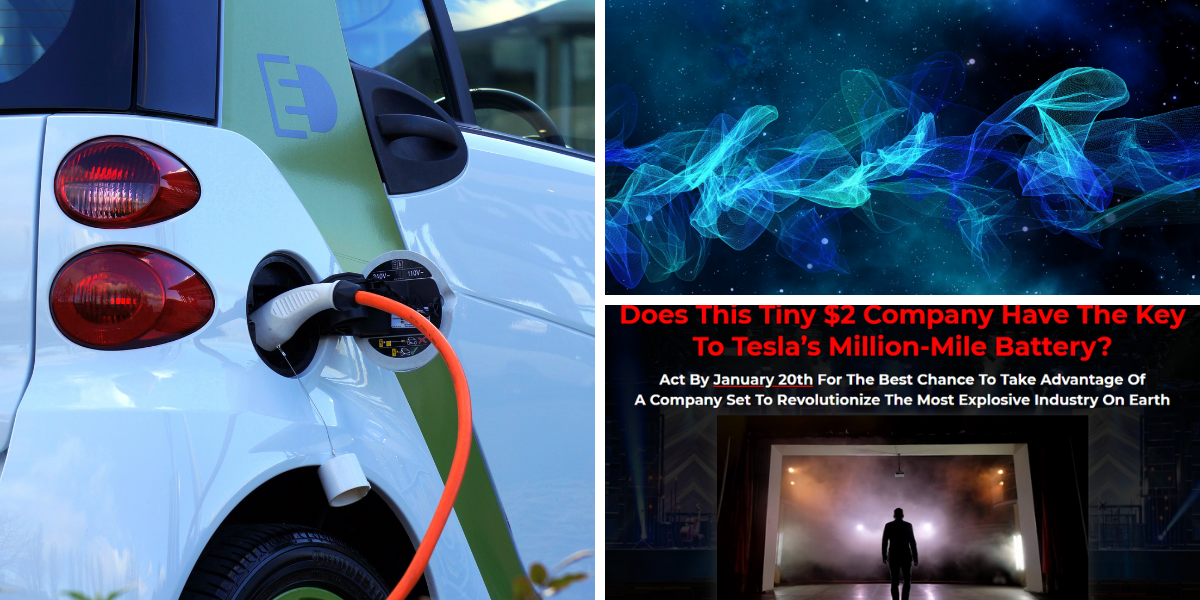 In a marketing event that took place earlier this year, investment advisor Ray Blanco talked about a “million-mile” battery stock that is said “to revolutionize the most explosive industry on Earth”, promising gains of up to 100x in just three to five year’s time. Although the claim sounds promising, we’ll investigate to see if it meets the high expectations Blanco sets.

Amongst all urgent calls to action and over-excitement used to describe this $2 stock, Ray Blanco doesn’t miss the opportunity to pitch us his investment newsletter: Catalyst Trader, to which an annual subscription goes for $1,995. Included in the subscription price you will receive weekly alerts complete with portfolio updates, two free reports, monthly “Action Point” Zoom calls, recorded interviews with C-Suite Executives and Researchers, as well as other perks. For those of you who would rather pass on spending nearly $2,000 for an annual subscription and put the money towards your stocking stuffer fund, here is everything we were able to uncover for you, for free. 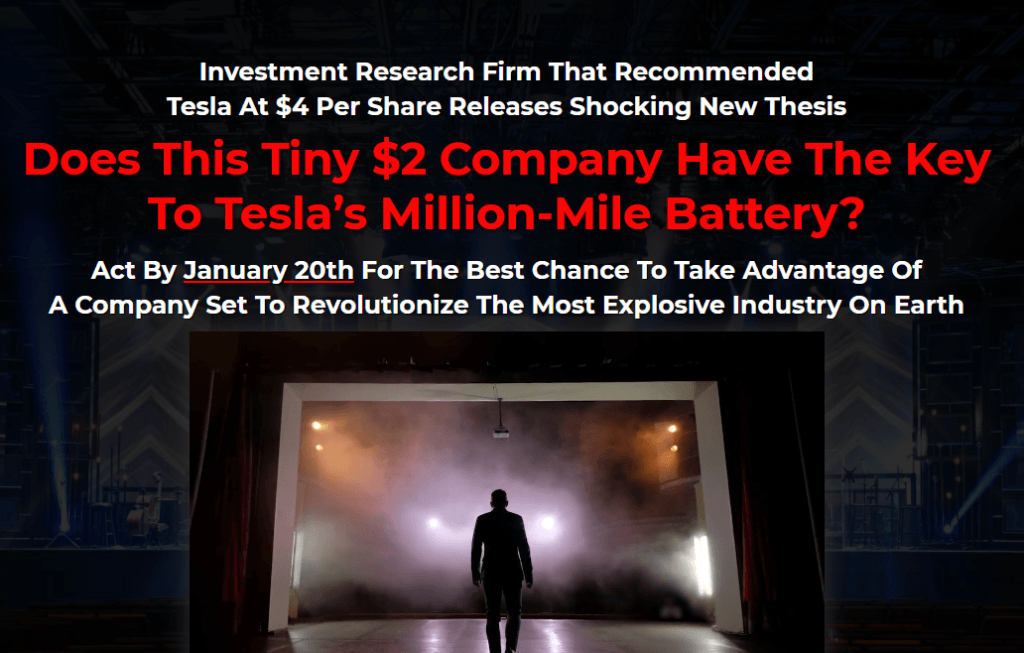 Ray Blanco, whose teasers we have covered here in the past, see: The 5G Killer and Marijuana Millionaire Playbook. Is the editor of several newsletters, including Technology Profits Daily and Penny Pot Profits. He has been a member of Seven Figure Publishing since 2010 and has spent over 10 years working for public and private companies as a network technician and systems analyst.

This is how he accumulated his specialized expertise in various fields, from advanced robotics and avionics to biotechnology. According to his bio, Blanco spends most of his time scouring the market for “the next big thing” and so far has successfully picked several stocks that have skyrocketed by more than 1,000% within a short period of time.

Blanco bases his claims on Tesla’s billionaire CEO Elon Musk, who aspires to create a battery with a life that can reach up to one million miles. Although Tesla has thus far failed to develop the technology behind this miraculous battery, Ray Blanco says that Musk and his company, Tesla, will partner with a tiny company that has already developed the “million-mile” battery technology.

Blanco’s teaser has been around since January of this year and he teased an event that took place on January 20, where Musk was supposed to talk about his plans for Tesla, and innovations in the field of battery life. Blanco claimed that he had inside information that Musk was also going to announce a partnership with this small company, hence the urgency of the ad to rush people to invest in this stock before its shares would presumably shoot to the moon.

*Update (July, 2021): This teaser has been updated and continues to tease upcoming dates, claiming that Elon Musk is going to announce Tesla’s partnership with this company any day now.

To make the newsletter more appealing, the author claimed that “a small stake of $5K would turn into $50K in as little as three months… And if we’re right about 100x in the next three-five years, then we’re talking about the opportunity to fund an entire retirement”. These claims were optimistic to say at least, and this goes for almost every investment advisor that teases “the next big stock”, promising to “revolutionize” an entire industry or the world.

The opportunity of this stock lies in the fact that, back in January, before the big Tesla event, the mystery company’s shares were still selling for $2, but once a partnership with Tesla would have been made public, investors would have rushed to buy it, which would result in an increase of up to 1,000% in the stock’s price within mere weeks or months. Needless to say, that announcement never came and indeed the company’s shares are still hovering around the same range as at the start of the year.

Before giving any clues about the company he teases, Ray Blanco talks a bite more about the technology that “will impact every home, driveway, and roadway in America” when describing this “million-mile battery.” According to him, the uses of this battery stretch far beyond the automotive industry and could be used to power any kitchen appliance or household item that currently runs on batteries, positively impacting the product’s life.

As for the company Blanco is talking about, here is all the relevant information we were able to gather from his presentation:

Based on what we know, such as the patent application number, makeup of the executive team, and specialization of the product under development, we were able to identify the company being teased as Novonix (OTC: NVNXF).

According to the company’s own website, it’s predecessor: GraphiteCorp was founded “to pursue graphite materials opportunities in the lithium-ion battery (LIB) industry” all the way back in 2012. It was first publicly listed in 2015 on the Australian Stock Exchange (ASX) and in 2017 the company executed transactions with two American groups, Coulometrics and NOVONIX, transforming the business into a supplier of advanced battery materials, equipment, and services to the global LIB market.

In July 2017, GraphiteCorp formally acquired NOVONIX and officially changes its name to NOVONIX. So, how can we be so sure that we identified the right company? Well, aside from NOVONIX’s specialized field of operation and research, Chris Burns, the CEO, and co-founder of NOVONIX is a former Senior Battery Research Engineer at Tesla and together with Admiral Robert Natter who acts as the Executive Director, they run the company together.

Besides this, the list of some of its international customers includes: Panasonic, Dyson, Bosch, and even though it doesn’t specifically mention Tesla, there were rumors regarding a strategic partnership between the two. NOVONIX’s official statement is that it cannot list all its international business partners and customers due to NDA’s signed and whenever Musk was asked about a potential business relationship between Tesla and NOVONIX, his only answer was “No Comment”.

Is This Lithium-Ion Battery Maker A Good Opportunity?

So does this tiny $2 company have the key to Tesla’s million-mile battery? Unfortunately, the much-anticipated partnership between Tesla and NOVONIX never came about. As the Tesla event Blanco teased for January 20th didn’t even have Musk mention NOVONIX, let alone any partnership between the two companies.

As a result, it’s shares haven’t fared to well, with the price dropping from nearly $2 back in January to around $0.81 as of this writing. While Blanco didn’t do any service to his readers by pushing them to invest in the stock at the beginning of the year, it doesn’t mean that the company is a complete dud. Investors still seem to be interested in it, even though it may not bring about returns as fast as Ray Blanco once claimed.

If NOVONIX delivers on their much-promised “million-mile battery” and finds a way to mass-produce it at lower costs while living up to its clean environmental billing, it may still realize its huge potential and its stock might very well skyrocket beyond the 1,000% originally predicated by Blanco. However, developing such a revolutionary product doesn’t only take time but also precious investment capital. so this would be a long-term buy and forget about it kind of opportunity if you do decide to take a flyer here.

What do you think of this lithium-ion battery technology? Is it the real deal or just another over-hyped technology among many? As always, we love to hear your thoughts in the comments section below.