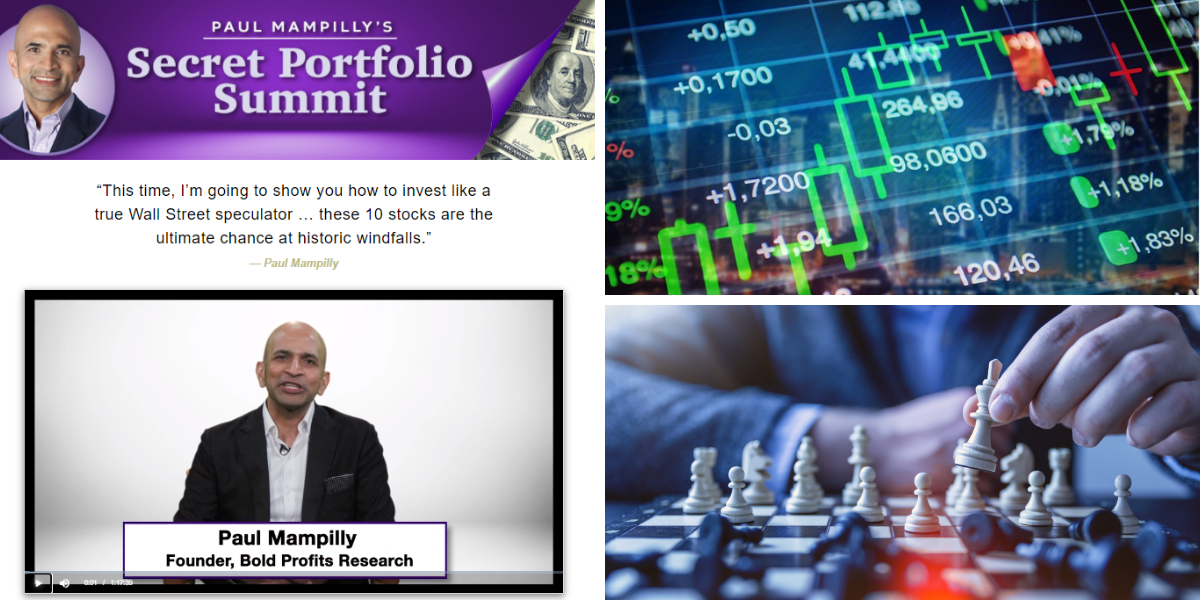 If you’re somewhat familiar with the investment world, you might have heard of Paul Mampilly, a Wall Street investor for over 25 years. In his latest marketing ad, Paul Mampilly’s Secret Portfolio Summit, the author teases no less than 10 stocks that he claims are in his “secret portfolio”. To find the stocks and their ticker symbols, you must subscribe to his marketing newsletter, Paul’s Secret Portfolio for a dizzying fee of $5,000 per year!

Unlike his other subscription newsletter programs, the Secret Portfolio “offers lesser-known investment opportunities available on the market” that includes “preferred stocks, warrants, royalty trusts, collateralized debt obligations, crypto coins, and even foreign stocks”. Moreover, he claims each recommendation in the program can help you turn “a $10,000 portfolio into a $10 million windfall. So, the returns you could see on a single investment might be gains of 5,000%, 7,500%, even 10,000% or more.” 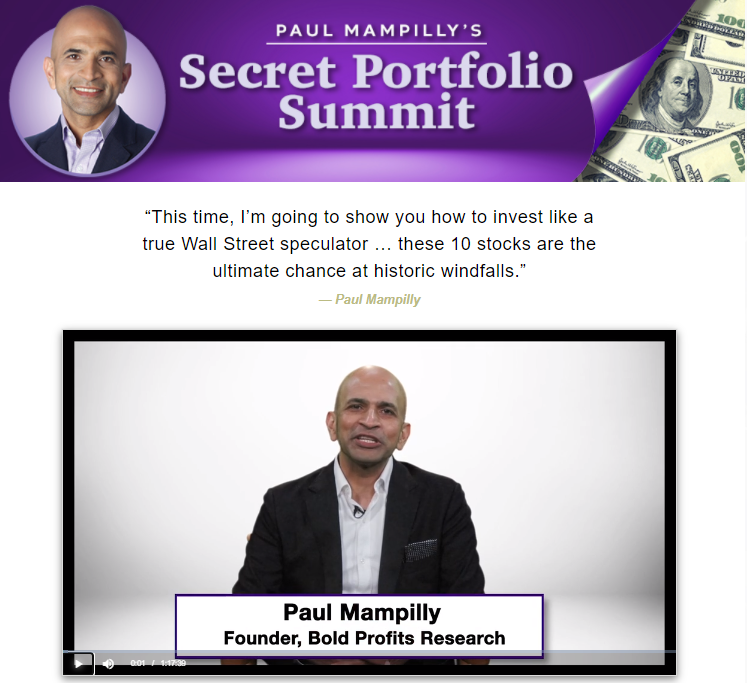 For the price, Mampilly promises to include several bonuses such as trade alerts, “Paul’s Secret Portfolio’s Rules of the Investing Game”, weekly updates, a model portfolio to get you started with, and 24/7 access to a customers’ only website, we would expect at least as much given the hefty price tag seesh.

Since paying $5,000 for an investment program isn’t something many ordinary people can afford, let alone in 2020. We took a closer look and identified some of the stocks he claims will bring you big returns. But first, how trustworthy is Paul Mampilly?

Mampilly started his career on Wall Street in 1991 as an assistant portfolio manager at Bankers Trust. He later jumped ship and held key-positions at ING and Deutsche Bank, managing multimillion-dollar accounts.

In 2006, Paul apparently received a business proposition from Kinetics Asset Management to manage one of their hedge funds. With his unique set of skills and financial abilities, he turned a $3 billion hedge fund into a $25 billion one and even managed to make a 76% return during the tough times of the 2008-2009 sub-prime crisis.

In his Secret Portfolio Summit, Mampilly teases 10 stocks from at least five different markets, each carrying its own unique opportunities and risks. From what we were able to identify from the 1-hour video, Mampilly talks about biotech stocks, SPACs (Special Purpose-Acquisition Companies), blockchain stocks, and graphene stocks. Two of these (biotech and blockchain) we have reviewed here in the past:  Jeff Brown’s 1 Biotech Stock and Paul Mampilly’s blockchain stock.

Graphene is a relatively new and lesser-known concept, especially in the trading world. It was only discovered in 2004 and it seems like a wonder material with incredible applications in electronics, optics, sensors, and biodevices. This could be linked to Mampilly’s predilection of teasing biotech stocks, and he is certain this material and a particular company producing it will become important in the upcoming years.

As exciting as they may seem, biotech stocks are not always the best bets for short minded investors who are looking for quick returns of 50-70% or more. Generally speaking, the majority of biotech stocks on the market need years to produce and win approval for market ready drugs, and the results are often more bad than good.

On the other hand, the same can be said about almost every category that Paul teases, as these industries inherently come with a high degree of uncertainty. Since the stocks being teased by the author carry a high degree of risk, let’s proceed cautiously and see which ones we were able to identify based on the information provided in the Secret Portfolio Summit teaser.

As we previously mentioned, the Secret Portfolio Summit teases no less than ten different stocks from various fields, so identifying all of them proved rather challenging since we weren’t working with clear, precise information to say the least. Nevertheless, here is what we did uncover from Paul’s Secret Portfolio Summit:

The company he mentions is currently developing a graphene-based powder product that can strengthen any given substance. Another clue we receive from Mampilly is that the company he teases is based in Australia and it is also developing a graphene-powdered battery that can allegedly charge a phone in just 1-2 minutes – sign us up! After piecing all these clues together, we are pretty sure the company being teased is First Graphene Ltd. (OTC: FGPHF).

It is also allegedly “able to take T-cells (white blood cells) and transform them into cancer killers”. Moreover, the company partnered with Pfizer and is worth just under $1 billion even though it generates less than $50 million in annual revenue. Finally, Mampilly mentions that “if one of the eight drugs in its pipeline reaches the commercialization phase, it will receive up to $2.8 billion from its partners”. We think the company being teased here is Cellectis (NASDAQ: CLLS).

As we have already mentioned, Mampilly doesn’t provide much information about many of the stocks teased, which means we were only able to identify some of the companies. Ultimately, the author’s goal is to make people sign up for his pricey newsletter program, so without additional info we weren’t able to go a perfect 10 for 10.

Is the Secret Portfolio A Good Opportunity?

Since no less than ten different stocks from five different markets were teased and we weren’t unable to uncover all of them, it is quite difficult to fully evaluate the opportunity here.

From our point of view, we reckon the most appealing stocks from the ones he teased remain the SPAC’s. Acquisitions by experienced operators of businesses that fall within their circle of competence can be a wonderful thing. While these aren’t likely to garner 10,000% returns or more over the short-term. If you have patience, some private companies that were acquired and taken public in this fashion have proven themselves to be worthy long-term investments.

What do you think of Mampilly’s Secret Portfolio? Can you guess all the 10 stocks he teases? Are you currently invested in any of the sectors he mentions? Tell us in the comments below.