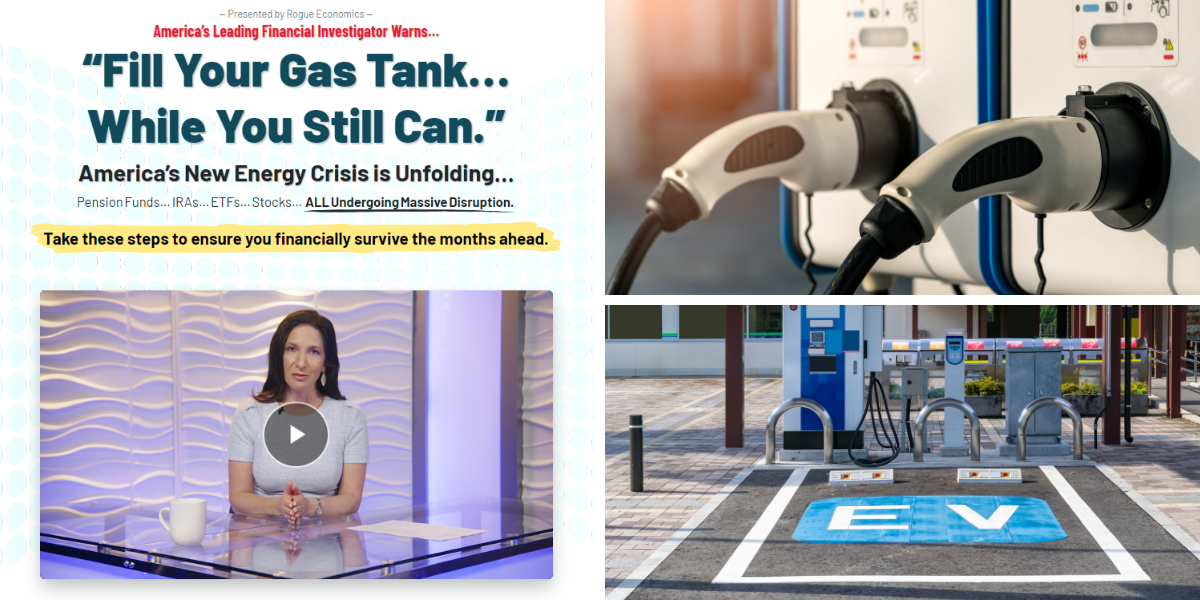 Filling up our gas tanks now costs more than it ever has and it appears that America’s new energy crisis is officially underway.

This is why Rogue Economic’s resident Wall Street expert Nomi Prins is here to detail her #1 “Great Distortion” stock pick that we need to know about in order to not only survive but thrive during America’s energy transition.

The price we’re now having to pay at the pump isn’t just affecting the way we commute to work, it’s also affecting how packages arrive at our doorstep and even more importantly, how food is delivered to our supermarkets.

Nomi Prins can be described as a ‘financial expert’, having previously worked at the highest tiers of Wall Street as a managing director at Goldman Sachs and as a senior managing director at Bear Stearns. Now she is an investigative journalist who strives to shed light on topics affecting the global economy. We have reviewed both Rogue Economics and disruptive energy presentations here in the past, including Luke Lango’s #1 Electric Vehicle Stock of the Decade.

As The Wall Street Journal recently put it: “Gas stations now face a tough, costly choice”. Either switch out and install the newer, more efficient pumps that we’ll learn about later in this presentation or lose money out of sheer stubbornness. So whether from an investor standpoint or if you simply depend on your vehicle just to get around, it’s important to know what’s going on and prepare for this shift.

Nomi adds that “if history and the stock market are any indicator, I’m predicting you can double and potentially triple your money over just the next 12 months”.  Over the long haul, maybe even 10x our money, but only if we prepare now. This got our attention.

What is going on, is that right as the world needs more oil, companies like Chevron, BP, and Shell are planning the exact opposite. They are strategizing about how to downsize the oil and gas parts of their business. On the face of it, oil companies cutting workers and downsizing their operations even in the face of booming prices seems in a word, crazy! It just doesn’t make sense unless we know the real story…which is that what we see happening today is deliberate and being coordinated to wean the US off oil and foreign energy.

One way to profit from this manufactured trend is with Nomi’s #1 Electric Vehicle (EV) charging stock for the “Great Distortion”, as it’s been termed.

Everything from the scale of the opportunity to the stock pick itself is covered in a special report called: The #1 Stock for America’s Great Distortion: 10x Gains on a Small Firm Disrupting a Critical American Industry.

In addition to detailing what’s coming next, a second special report called “Going Wireless: The Future of EVs” and other exclusive research is ours with a subscription to Rogue Economics’ Distortion Report, which costs just $49 for the first year, for a limited time.

A Glimpse of What’s Coming Next

Nomi says we’re at a turning point in history and what we’re witnessing is the birth of a new form of energy, after 160 years of dominance by oil.

But what will be coming out of pumps is not ethanol. It’s not hydrogen or liquid natural gas, it’s completely different than that. It is still similar to oil in one respect and that is in terms of the growth and production that lies ahead.

The reason almost nobody can see it is because the last time one of these shifts happened was all the way back in the 1850’s, when whale oil was still the main source of energy in the world.

What we’re talking about here is Electric Vehicle (EV) charging stations and H.R.3684 – The Infrastructure Investment and Jobs Act signed into law this past November makes the conversion of at least 500,000 gas stations across the country into EV charge stations inevitable.

This will engender more radical changes in the next 8 years, than in the previous 114 years of traditional gas stations. I guess the old adage: there are decades where nothing happens and weeks where decades happen is applicable here.

A telling sign is that even the people who made their money in oil and gas are switching over their investment portfolios and backing these new pumps. Institutions like the 107-year-old Rockefeller Foundation, Koch Industries, even the world’s oil giants are all realizing that the next generational investment is likely going to be America’s new fueling stations.

One way to play this trend is with a company that specializes in these new fueling stations and right now, Nomi says she has a favorite “New Energy” stock that is currently selling for less than $20 per share. Let’s find out what it is.

We’re fed quite a few details about this #1 EV charging stock pick, here are some of the more valuable ones:

Based on this info, the “Great Distortion” stock is none other than ChargePoint Holdings (NYSE: CHPT).

With some analysts expecting the market share of EVs to be 30% by 2030, there is no denying that the demand for charging stations is going to increase.

ChargePoint is in pole position to profit from this as the world’s largest network of EV charging stations, operating in 14 countries and counting. It has deployed more than 188,000 places to charge to date, more than 7x its closest competitor, which is Blink Charging.

Perhaps most importantly, the company has an established, capital-light business model with hardware plus high-margin, recurring software subscription services, and growth that is directly proportional to rapidly increasing EV penetration. At a current market cap of only $5 billion for the largest network of charging stations in North America, 10x growth over the long-term is a definite possibility as it expands its EV charging infrastructure.

Do you see ChargePoint living up to its potential? Let us know why or why not in the comment section below.