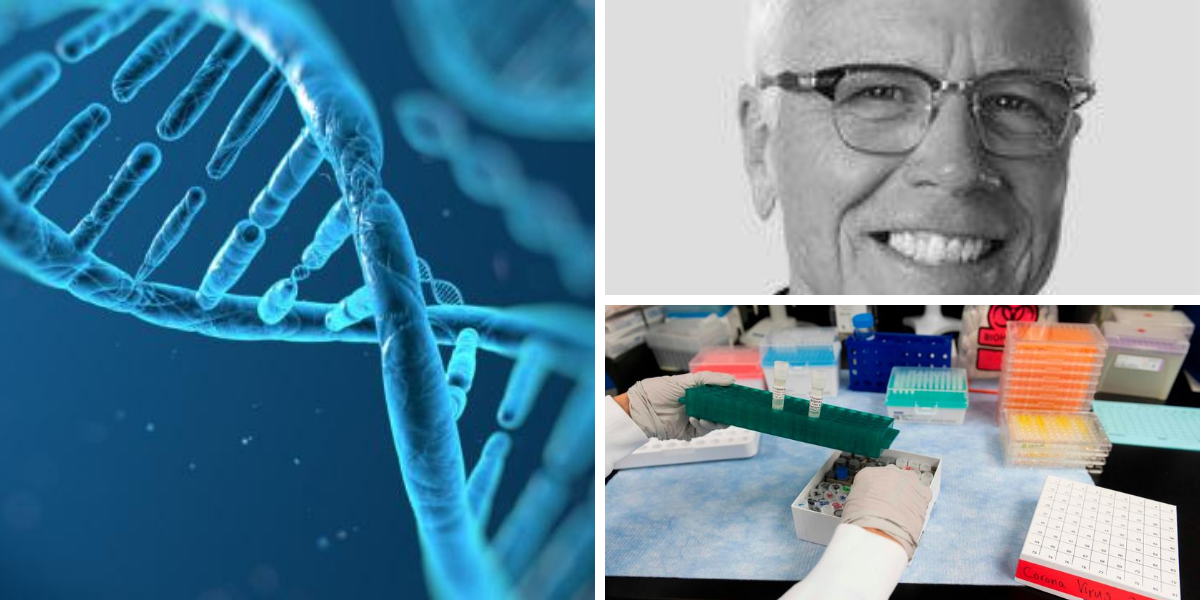 When I first clicked on Michael Robinson’s teaser for a “super vaccine” company, I wasn’t expecting to see former Fox News host Suzanne Sena give us the pitch…newsletters are attempting to step their game up in a bid to seem more credible, which we also saw with Bill O’Reilly being featured in the teasers for The Smartest Investment Strategy of All Time and The Extreme Fortunes Summit

The video starts off by telling us that “a new ‘Super Vaccine’ is about to begin production” and that “the FDA has granted Phase I approval in record time.” We have covered biotech stocks extensively in the past, as it seems to be a preferred industry for stock speculators. 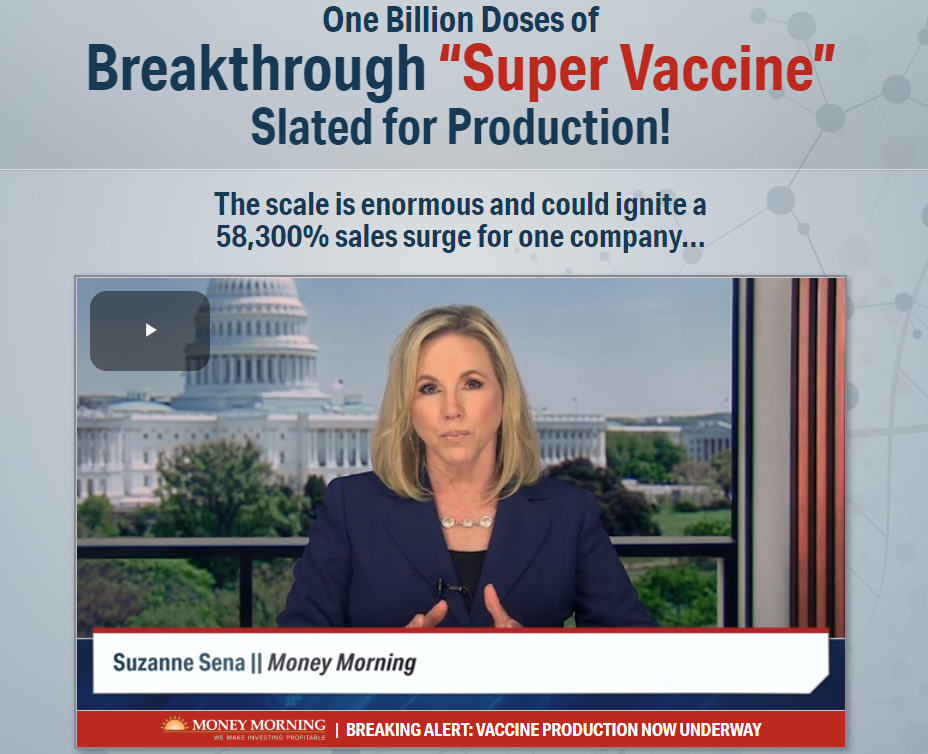 Apparently the company is so confident in the Super Vaccine “they’ve signed a contract to produce one billion doses in the coming 12 months alone.” And that this “could ignite a staggering 58,300% revenue surge for this tiny company by year’s end.”

Our man Michael Robinson – who we will talk more about in a moment goes on to say that this could be the “biggest game-changer in the history of medicine.” Subtlety isn’t usually a newsletter writer’s strong suit.

Today it seems that every pharmaceutical company and even some that have nothing to do with medicine at all are trying to develop a vaccine for COVID-19. Almost all are at the initial stage and speculation is running rampant about who will eventually be “the one” to make it past the test result stage.

Michael obviously thinks his company with its “patented technology has the potential to end the COVID-19 crisis, but it could also stop future pandemics BEFORE they even start.”

Another clue we are given is that back in April, “the administration handed this tiny company $483 million to help push the Super Vaccine through the FDA approval process.”

Next some big name pharmaceutical giants are named dropped, but to his credit Michael does qualify things by saying “I don’t want readers to expect the Super Vaccine company to deliver 850,000% like Genentech, or 241,000% like Amgen, or even 42,000% like Gilead. Just because it happened before doesn’t mean it will happen again. Those companies were the best of the best, and the gains took decades to achieve. So I really want people to be realistic.”

One big differentiator between this company and others Michael says is that “Instead of injecting your body with a virus, the Super Vaccine injects your body with precoded messenger RNA.” Which really nails down our prospects.

Michael is a 36 year silicon valley veteran, he’s been a guest tech and biotech analyst on CNBC and Fox Business (maybe that’s where the connection with Suzanne Sena stems from) and had write ups published in several publications including The Wall Street Journal.

Biopharma or biologic medical products by nature is an industry with a very LONG time horizon. Even former FDA commissioner Scott Gottlieb has said in a television appearance it will be a long road ahead for any company trying to develop a vaccine candidate.

One of the primary reasons being that reproducing large molecules reliably at an industrial scale requires massive testing and also manufacturing capabilities, which in turn requires a lot of capital – Between $200 to $500 million or more according to some McKinsey & Co. research.

But remember, apparently this “super vaccine” is not traditionally developed. “It’s designed to be quick, cheap, powerful, and safe.”

Over the long-term, investing in biotech R&D has yielded better returns than the pharma-industry average. Which is one reason why we are seeing a proliferation of small biotech startups like our as yet to-be-named “super vaccine” company for which “human trials were a huge success.”

Definitely a fast developing story, which is one reason we wanted to get this up now.

Based on the information we’ve been given, we were able to narrow it down to one company in particular based on the following:

From this we were able to sleuth out Moderna Inc. (Nasdaq: MRNA) as our “super vaccine” company. Let’s put the puzzle pieces together:

The aforementioned funding was for accelerating development of their COVID vaccine candidate, mRNA-1273. Funding which they need for the Phase 3 clinical trials they are due to start shortly.

To date, the company says that their “human trials were a huge success. In fact, the Super Vaccine produced an immune response in every single patient.”

Given that our host Michael Robinson has talked up multiple COVID-19 plays this year, we are naturally skeptical about vaccines that are such long shots that this writer has a better chance of getting an NBA tryout.

But if this much is true then shareholders have plenty to look forward to, that just leaves us to wonder how reliable have Moderna’s Phase 2 and other results truly been?

Well on 14 July, Moderna scientists published preliminary results of the Phase I clinical trial on its candidate COVID-19 vaccine. Not many details are available on this, but the results were deemed acceptable enough to advance use of a 100 microgram dose of mRNA-1273 into a Phase III trial in the United States.

Moderna has been around since 2010 focusing on drug discovery, drug development, and vaccine technologies based exclusively on messenger RNA (mRNA).

Despite being one of the largest biotech IPO’s at the time in 2018 – raising $600 million, and a total of $3.2 billion in equity since inception, no mRNA drug that the company has developed to date has been approved for human use.

Further, none of its mRNA molecules have even reached large clinical trials. Despite this bad form of consistency the company’s market cap exceeds $28 billion while cumulative losses since inception top $1.5 billion. Even the father of the efficient market hypothesis Burton Malkiel would be confused by this one.

Given recent developments…cough, cough COVID-19, Moderna’s long-time focus on developing vaccines may mean their time has finally come. The FDA has approved clinical trials for the Moderna vaccine candidate, with the company later receiving the $483 million investment previously mentioned earlier in the article.

They have smartly partnered with contract manufacturer Lonza to establish manufacturing suites at Lonza’s facilities in the United States and Switzerland for the manufacture of mRNA-1273 at both sites. This will both lower their costs and outsource a core function they do not have specialized expertise in.

Despite these steps, the fact remains that mRNA vaccine development is considered the riskiest of all, and all the main pharmaceutical companies abandoned their mRNA development because of dangerous side effects that can arise in getting the RNA into the human living cell.

To get a vaccine candidate developed that passes all clinical trials and manufacture hundreds of millions or “up to one billion doses” within the next year seems like a very tall order to us.

To sum everything up:

What do you think of Moderna? And possible COVID-19 vaccine makers in general? Are you a biotech investor? Or too adventurous for your tastes?