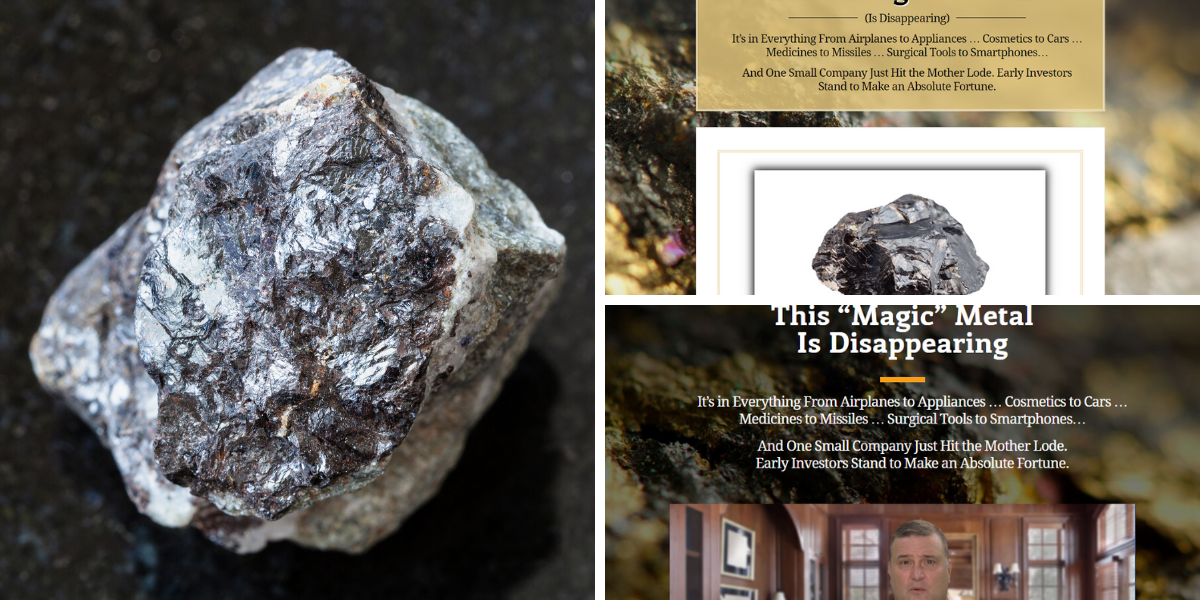 Matt Badiali claims that a "magic metal" is disappearing and that one mining company sits on the last big mine in the world. What is he talking about here and what is this "magic metal" stock he's teasing?

He claims that the stock price could increase 30-fold over the coming months and years, but will it really? Probably not.

In this quick review I'll be going over what this "magic metal" is as well as the mining company stock that he claims could increase 30-fold.

Spoiler Alert: Don't get too excited.

There's a good chance you've come across one of the presentations for this teaser. There are multiple that I've seen, and likely more that I haven't... 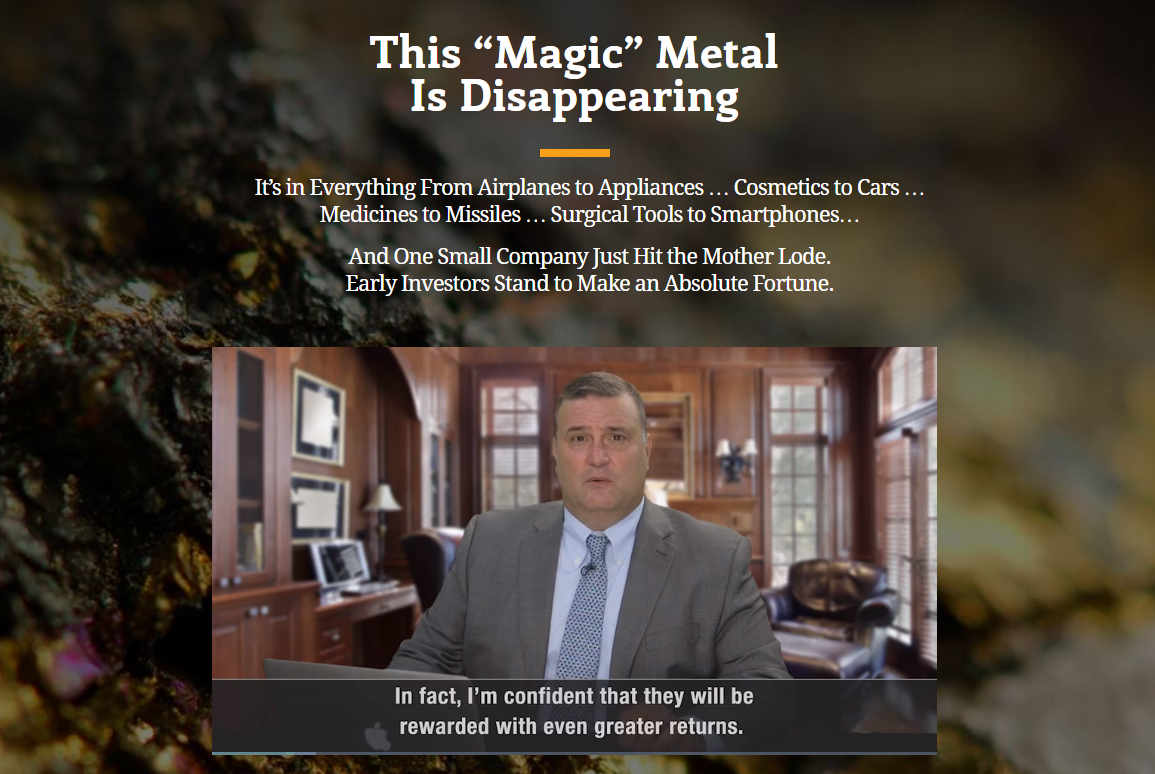 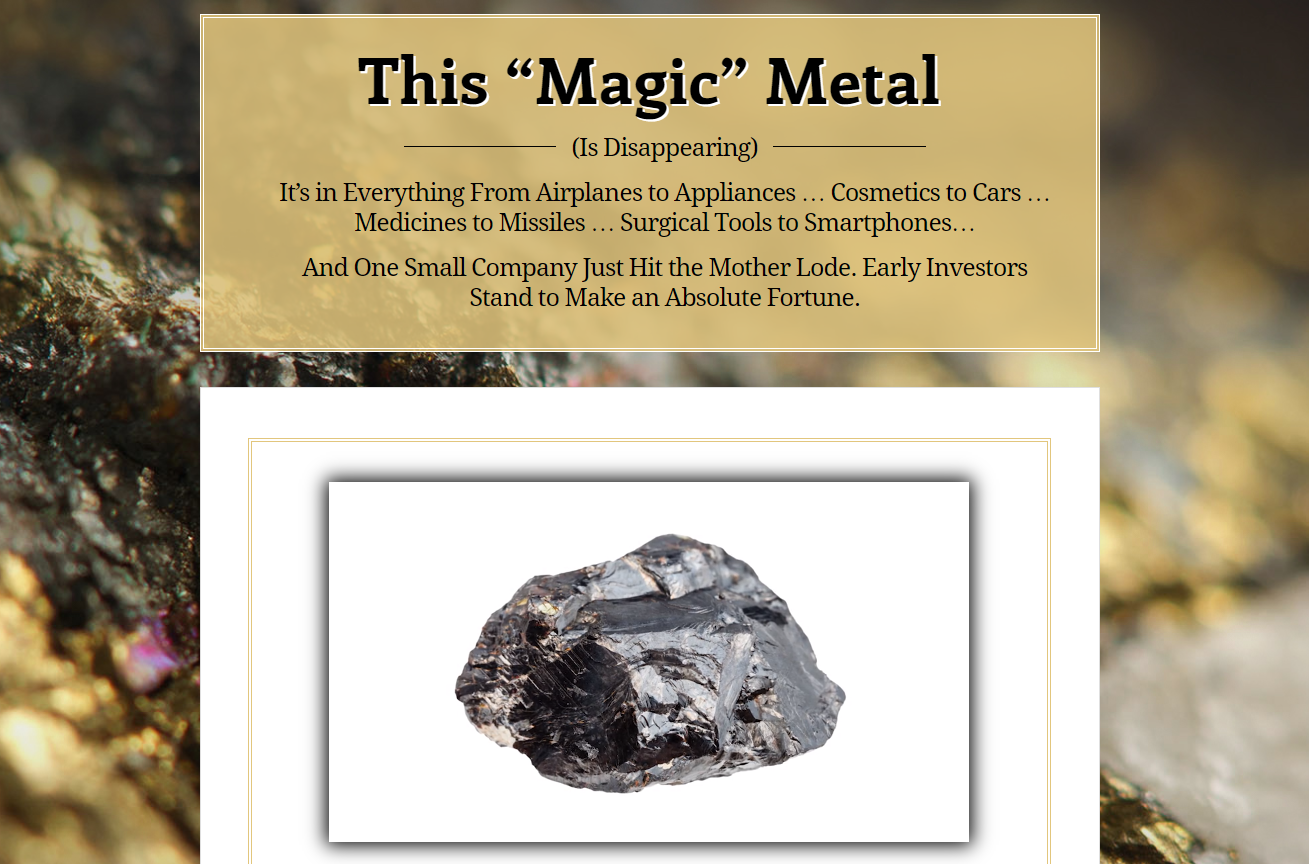 Some of what we are told about this metal is that...

The claim is that the supply for this metal, which is in great demand, is running very low and there haven't been any big supply findings... except for one. And Badiali claims that the one mining company that owns this mine could see stock prices soar by as much as 30x in the coming future due to the increasing demand and dwindling supply.

In the presentation he compares this to the lithium boom and went on to show us a bunch of stocks that went up in price from it.

Some other things we were told include:

... and at one point he talks about how an opportunity like this might give you the ability to afford that beach-front home you always wanted.

Well I for one know that I would love the opportunity to buy a beach front home. So then where should I invest?

But how much of what he says can you really trust?

One thing I think's worth pointing out is that the testimonials he showed of people who have supposedly made large amounts of money from his recommendations are fake... 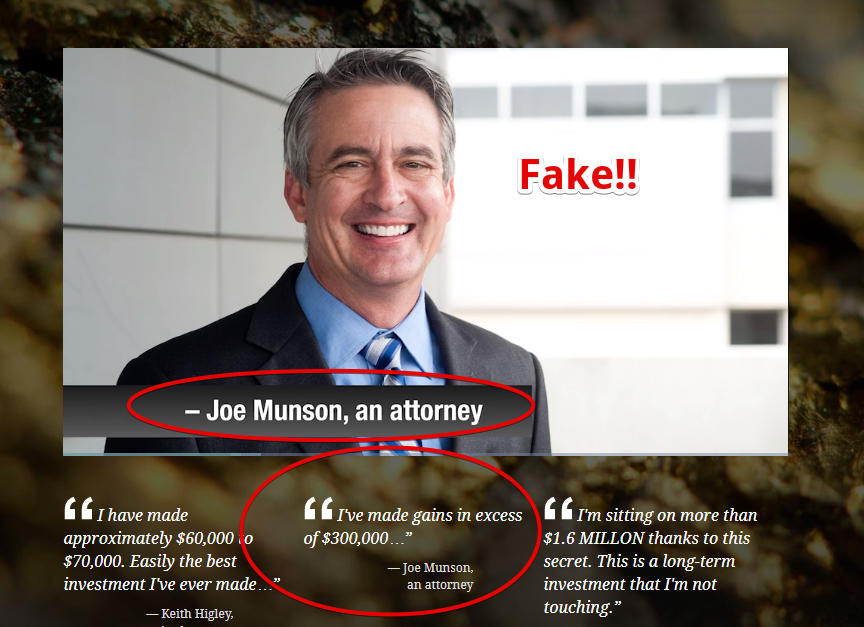 Well, at least I know that the images are fake. I decided to look into the image shown above, and below you can see that this picture is really just a stock photo... 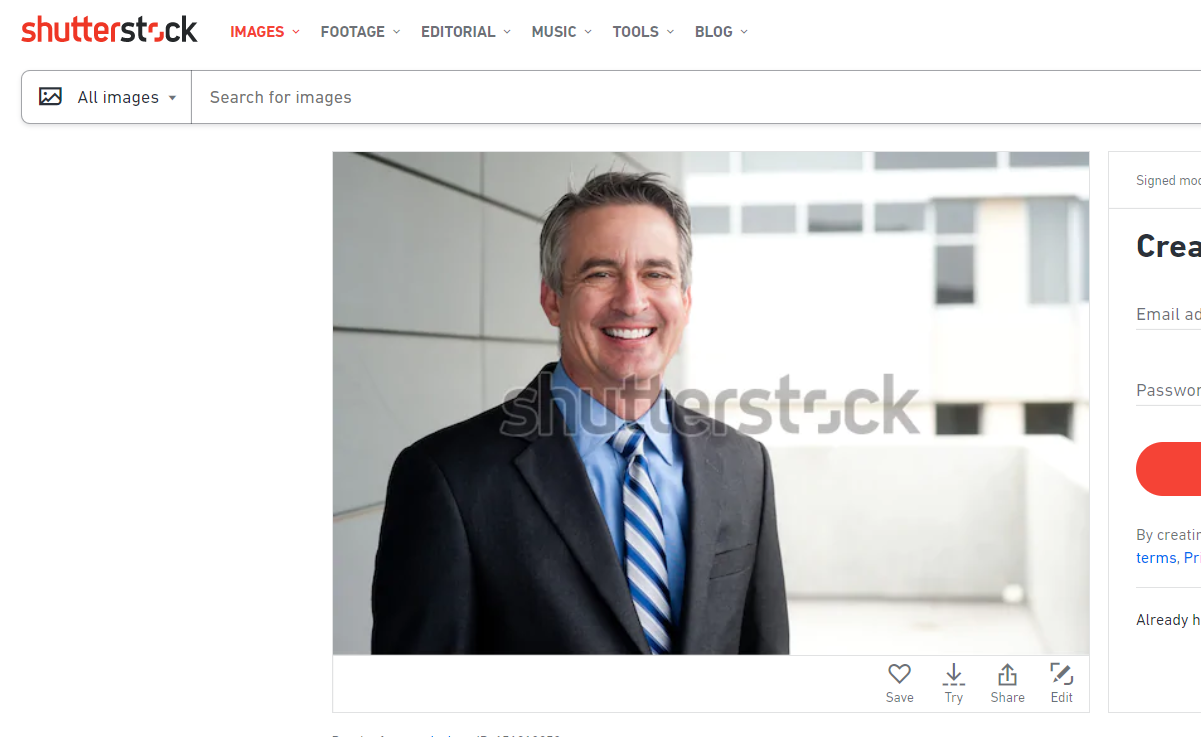 And not only that, but the entire presentation finishes with a sales pitch.

The idea is that you can get Matt Badiali's "magic metal" stock pick in his "free" report called Magic Metal riches: How You Could Make 3,000% Gains on the Commodity Trade of a Lifetime... 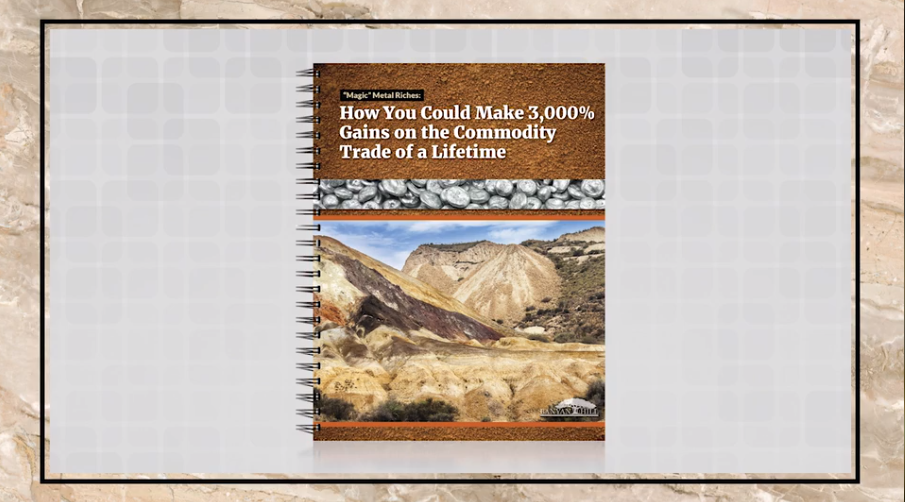 The kicker is that in order to get this "free" report you first have to pay to subscribe to his newsletter advisory service, Real Wealth Strategist, which is a follow-along style investment advisory service that provides subscribers with investment recommendations regularly. The normal price for this is $199/yr but there are often discounts given through the promotional material.

This is the same teaser > free report > buy our subscription first marketing tactic that is often used to bring in new subscribers to investment services like this. We saw the same thing going on with "The Next Tech Giant" teaser as well as the "blue gas" stock teaser.

*WARNING: When you join through this funnel you also get 3 free months of Alpha Investor Report. This is an "added bonus" and if you forget to cancel after the 3 months are up then you'll be charged for an entire year.

What Is This "Magic" Metal?

The "magical metal with unheard of superpowers" that is being teased is good old zinc.

And not only that, but the picture we were shown in the presentation gives it all away. It's a piece of zinc... 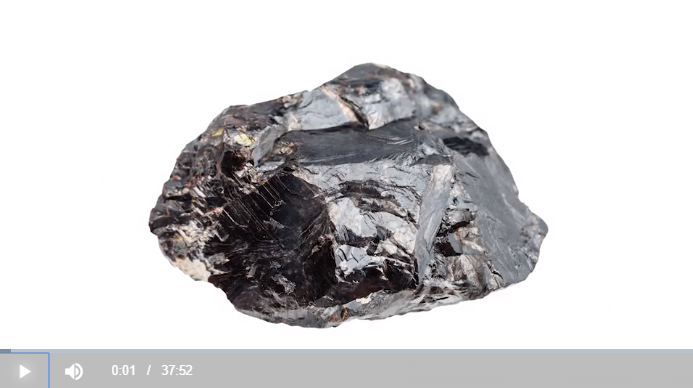 What does the limited supply of this metal mean?

It's simple supply vs demand. The demand is still larger than ever for zinc, but the supply is running lower and lower... which will drive up prices.

However, there are a lot of other variables that are having big effects on commodities in this sector, such as the trade dispute with China and the corona virus, both of which have led to falling stock prices.

Who Is Matt Badiali? 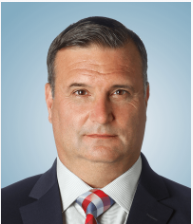 Matt Badiali is a former geologist with over 2 decades of experience in the field. He received a BS in Earth Sciences from Penn State University and went on to get a Masters in Geology from Florida Atlantic University. Much of his time in the field was spent working for a drilling company as well as being a consultant to an environmental company. And if that's not enough, he also went on to teach geology at Duke University and the University of North Carolina.

Now his career seems to be mostly focused on investing. He is employed by the Banyan Hill publishing company and runs several newsletter advisory services, which include Real Wealth Strategist, Front Line Profits, and Apex Profit Alert. Through these services he provides investment recommendations to subscribers regularly.

As you can imagine, his area of investment is centered around geology, so it makes sense that he is promoting some "magic metal" stock. And his approach to investing is very hands-on - traveling all over the world and visiting mines, drilling rigs, etc. in-person before investing in the companies operating them.

It's also worth mentioning that Matt likes to invest in stocks linked to the commodities, not the commodities themselves, as he is doing here with this whole "magic metal" investment.

What Is This "Magic Megal" Stock?

Some teasers are harder to piece together than others. Luckily, this wasn't all that difficult. We were given plenty of different clues as to what this stock is that is being teased. Some of these include that:

And what really helped me figure out the stock was some of the images he showed us in the presentation.

He kept showing this image and stated that the mining of this "magic metal" would take place right beyond the lake. 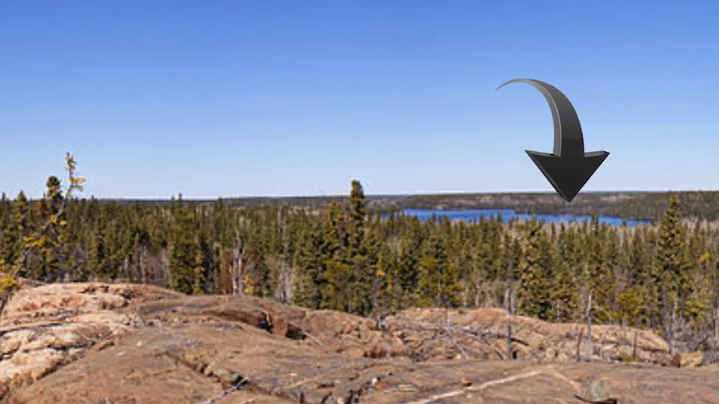 I ended up doing a search for the image and found that this picture is of Flin Flon, which is a mining city in Canada that does indeed have a zinc mining plant. Who owns the mining plant? The Hudbay Minerals Inc mining company.

Not only that, but there were also a few images shown of the operations at the plant, which I looked into further and found to also be pictures from the Hudbay company.

Additionally some of the other clues we were given check out...

Everything here points to Hudbay Minerals Inc (HBM).... but is it a good investment?

Can you really expect this stock to multiply by 30x? Will it really be able to "make an absolute fortune" as Matt Badiali claims?

One thing is for certain... you shouldn't count on it!

First off, it's quite a reach to expect a $2 billion company to grow 30-fold in this industry. That would catapult the company to the top, making them one of the largest mining companies that exists. And I wouldn't expect this... especially not because of their zinc mine.

The teaser is old and outdated!

I'm actually surprised that this "magic metal" teaser is still going around. It's been surfacing on the internet since at least 2018, and much of the information it contains is outdated.

One of the main problems here is that Hudbay's zinc mine, which we are told will catapult the company 30-fold in price, is expected to close down in 2021.

But I guess accuracy isn't that important here... as long as Banyan Hill is luring in more subscribers then they'll keep running the teaser.

Like I said, don't expect this stock to increase 30-fold. Matt Badiali knows his stuff when it comes to geology, but you have to remember that the whole "magic metal" presentation is a sales pitch to lure in new subscribers to his newsletter service... so you have to take some of what's said with a grain of salt.

The 12-month price forecast from analysts at CNN is much more modest. They certainly aren't expecting any 30-fold increase, although the predictions on the higher side are over 100%+.

You're welcome and I hope this review has provided some value to you. If so, please share this post to help spread the word.

Also, let me know what your thoughts are on this "magic metal" and the Hudbay company. I'm interested in hearing others' opinions.