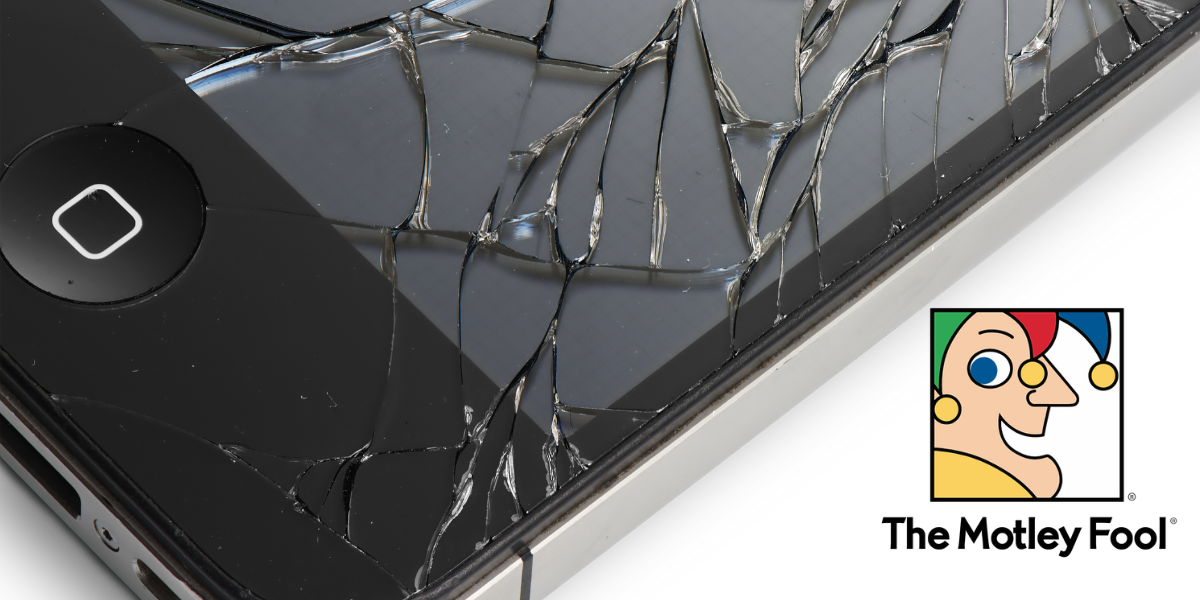 If you're wondering what Motley Fool's "Death of the iPhone" stock is that they're teasing then you're in the right place.

In this quick review I'll be going over the name and ticker symbol of this teased stock, which they claim could explode in price in the near future.

There may be multiple teasers floating around the internet, but what I came across started off with an article teaser titled "The Death of the iPhone"... 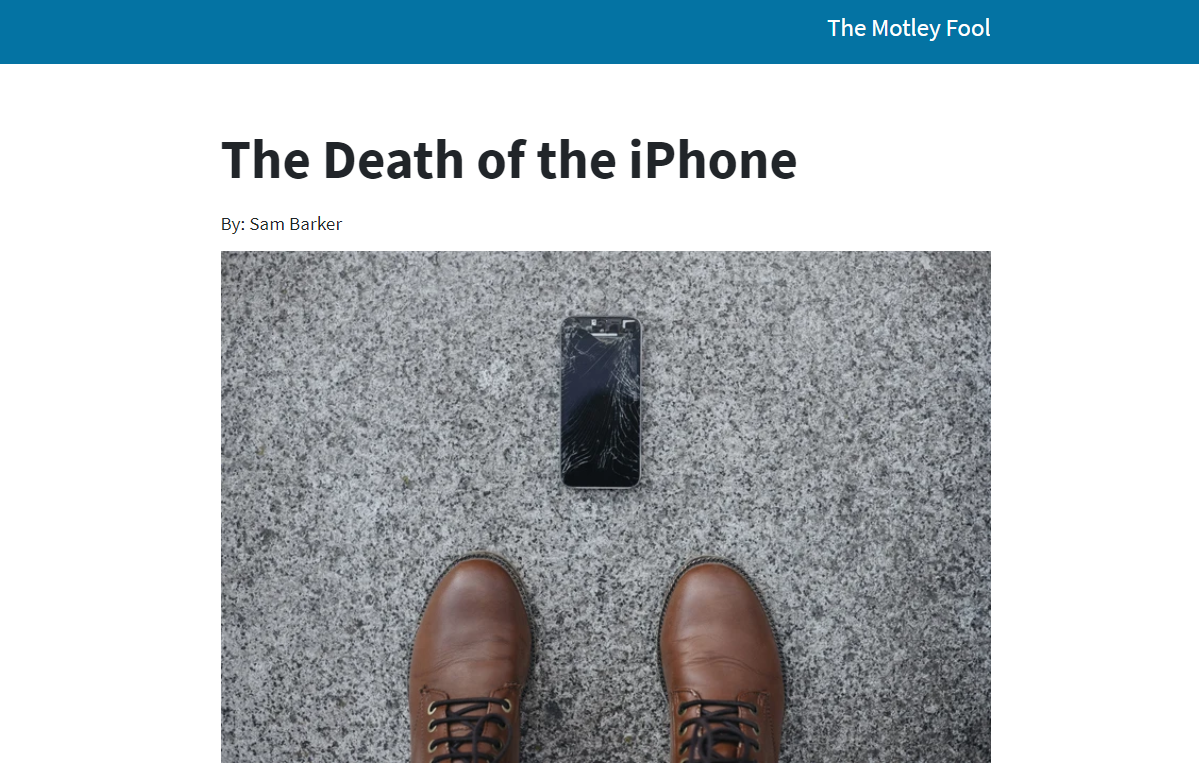 In this article they teased some small company that is going to supposedly profit hugely from Apple's new device, and this then led me on to a video presentation that provided more juicy details... 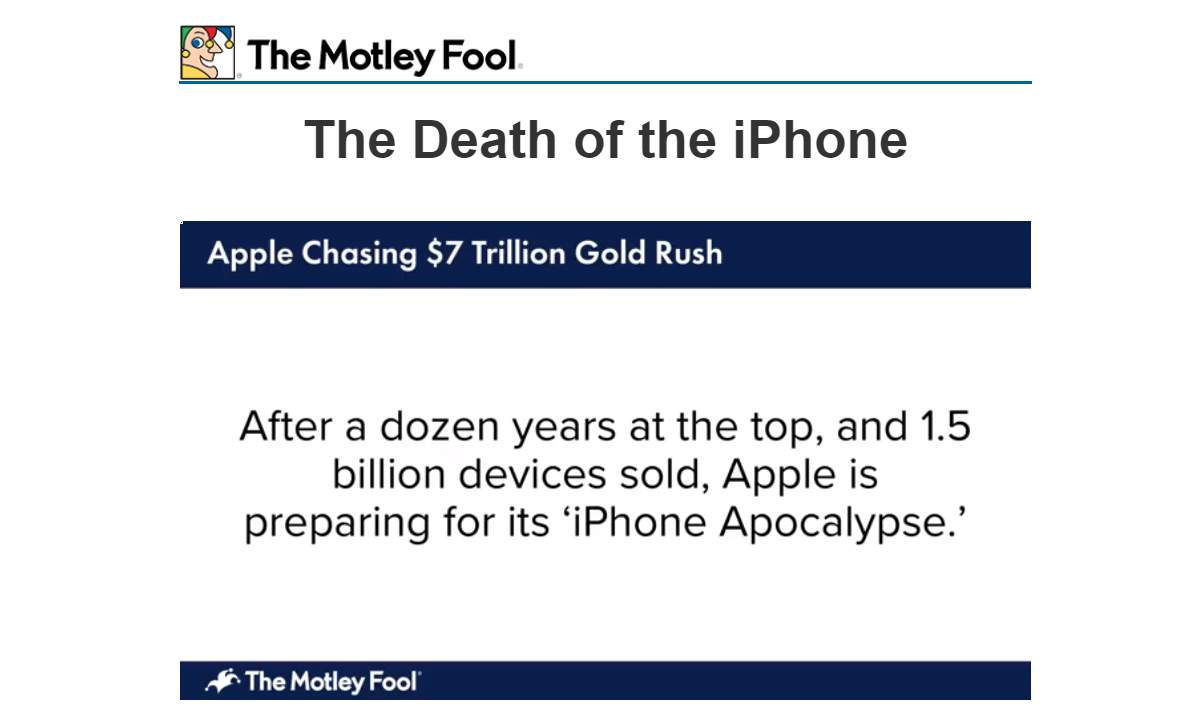 In the teaser Rex Moore, the guy behind it, talks about how iPhone sales have been slowing as well as consumer upgrades, which is hurting investor confidence. This situation has been called the "iPhone apocalypse", and there are plenty of news media outlet's spreading the fear.

But does this mean you should avoid Apple stock at all cost? On the contrary. He claims that Apple is on the cusp of a game-changing opportunity coming out of "the company's secret labs"... that cold be worth $7 trillion.

This is the death of the iPhone and the birth of something new - as he calls it.

As expected, the team at The Motley Fool has put together a report that goes over the stock being teased. This is titled: The 1 Stock for the Death of the iPhone... 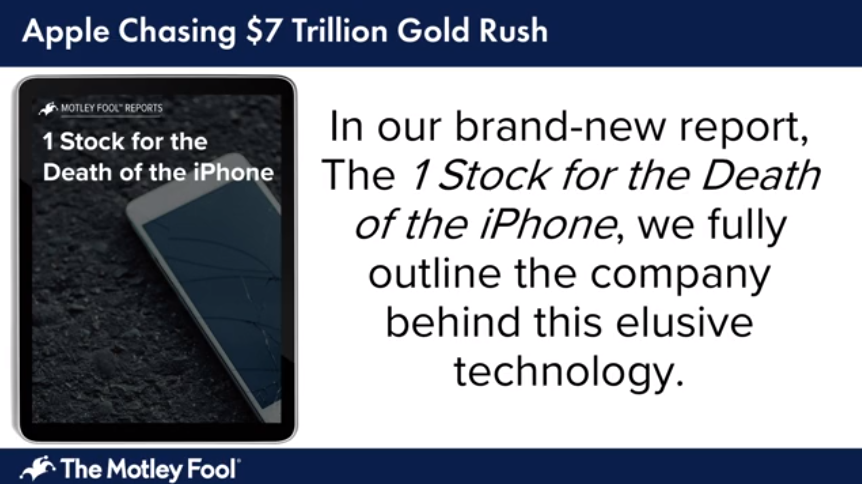 BUT, of course in order to get your hands on this report you must subscribe to their Stock Advisor service, which is a follow-along investment advisory service that provides subscribers with investment recommendations on a regular basis - this costs money.

This is the same marketing tactic used in their "#1 pot stock" promo.

The good news: You won't have to subscribe because I'll be exposing this stock for free.

It's All About Augmented Reality, or AR

As was mentioned in the promotional material, Apple has what is called project Garta, which refers to the work they are doing testing out Augmented Reality devices.

They are supposedly coming out with an AR headset pretty soon, but are keeping things silent and most of the information on this project is just speculation at the moment.

What is Augmented Reality?

It's the next big thing!

No, but really, Wintergreen Research really did predict that this will be a $7 trillion industry in the coming years, as was stated in Motley Fool's teaser, and people are expecting big things from this new emerging industry.

But what the heck is it?

Well, you've probably heard of Virtual Reality before, which provides an entirely virtual experience. Augmented Reality is different. It is when digital elements are added to the real world, such as was done with the Pokemon Go game... only Apple is expected to take things to an entirely other level.

Augmented reality has some serious investment potential moving forward. It's an exciting new technology that has many possible uses.

Here's a short 2-minute video that explains this new technology better than I ever could:

Apple is largely keeping their new inventions a secret, as you should expect, but many claim they are going all in on this new technology, and that this could be the next big thing. According to some sources they have already been installing small components on the new iPhones that will be able to integrate with this new technology when it becomes available.

Not only that, but Apple already has some AR features in use on their iPhones that you probably already know about. For example, Apple's Measuring app that allows you to use your iphone's camera to measure an object is an AR feature.

So, what is Motley Fool's "death of the iPhone" stock? Well, let's take a look at some of the better clues that they give us.

What they tell us about this company includes:

After a lot of research and headache... beep boop bop... my analysis says that the stock is... II-VI (ticker symbol: IIVI)

II-VI (aka Two Six), is one of the leading companies in optoelectronic components and have products used in aerospace & defense, communications, materials processing, semiconductor capital equipment, consumer electronics (VR and AR), the automotive industry, and life sciences.

All of the information provided in Motley Fool's teaser fits this company perfectly.

All clues point to II-VI (IIVI)... but is this really the incredible opportunity that they claim it is?

The investment potential for AR is likely going to huge. Of course no one can predict the future, and I'm not a fan of outrageous predictions, but the market of possibilities for AR is very big. And, according to Tim Cook, Apple's CEO, it could have a similar impact on the world that the iPhone did when it first came out in 2007.

But... is II-VI really a good investment?

We know that AR holds big investment potential in the coming years and we know that the stock The Motley Fool is teasing is II-VI. Now the question is... is this really a good investment?

Analysts at CNN Business likely aren't seeing the same speculative picture that The Motley Fool is. The higher side of their 12-month price forecast is over +100%, with lower prediction in the negatives... which isn't what you'd expect after hearing Motley Fool's presentation.

The Motley Fool's prediction, which is very vague, is hinging on Apple's new AR products being a huge hit and II-VI being the supplier of the lasers needed for these products, but no one can predict how this will play out... although possible.

The good news is that II-VI certainly doesn't have all its eggs in one basket. Even if for some reason, which seems unlikely, augmented reality wouldn't be as big of a hit in the future as predicted or if Apple wouldn't rely on their technology like predicted, II-VI has a lot more to offer than just products in this new emerging industry. For example, the company also sells laser products for 5G and 3D printing... two other fast growing industries... and as mentioned they are involved in aerospace & defense, etc.

I hope this short review has provided some value to you. If so, please share it to help others out as well.