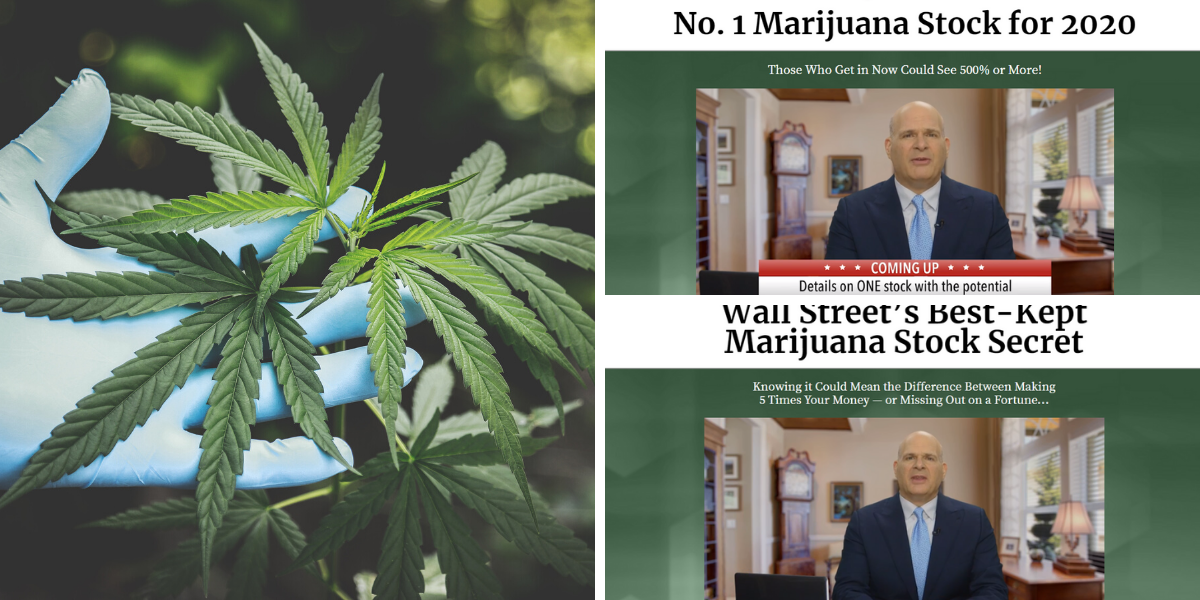 In this short review I'll be going over what Charles Mizrahi's "No. 1 Marijuana Stock for 2020" is... so if you want to know what the stock is without having to buy into the subscription he's selling then you're in the right place.

There have been several different teasers I've come across for this, one was titled the "No. 1 Marijuana Stock of 2020" and the other titled "Wall Street's Best-Kept Marijuana Stock Secret"... 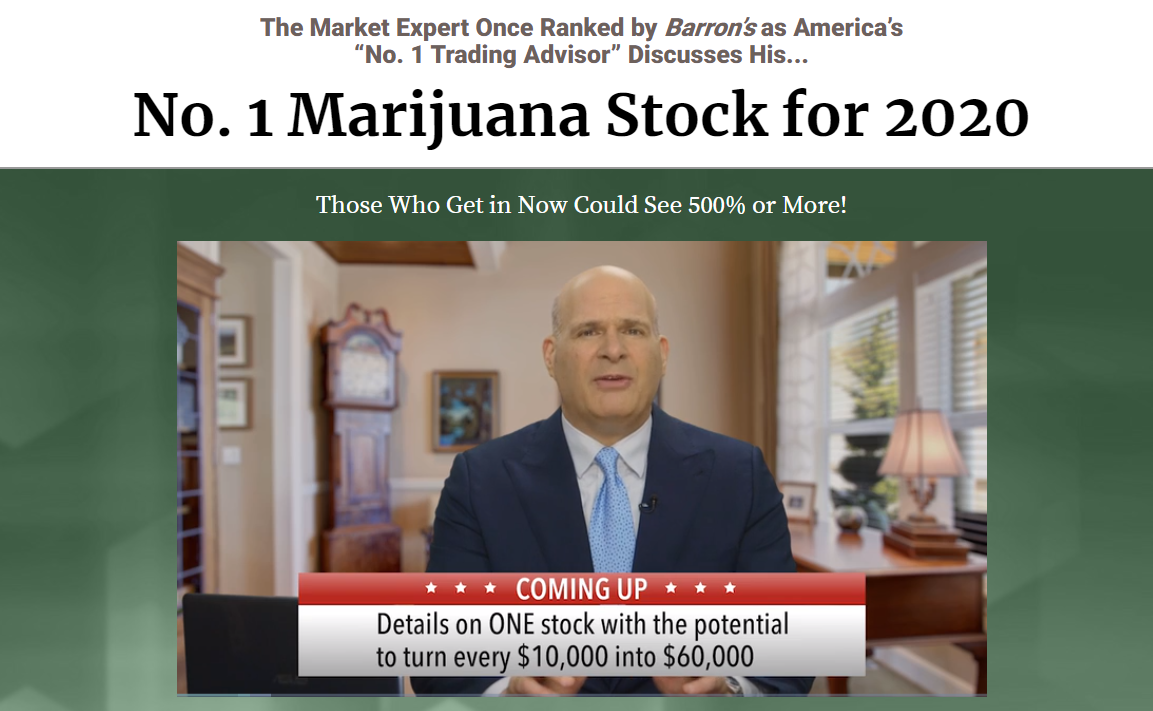 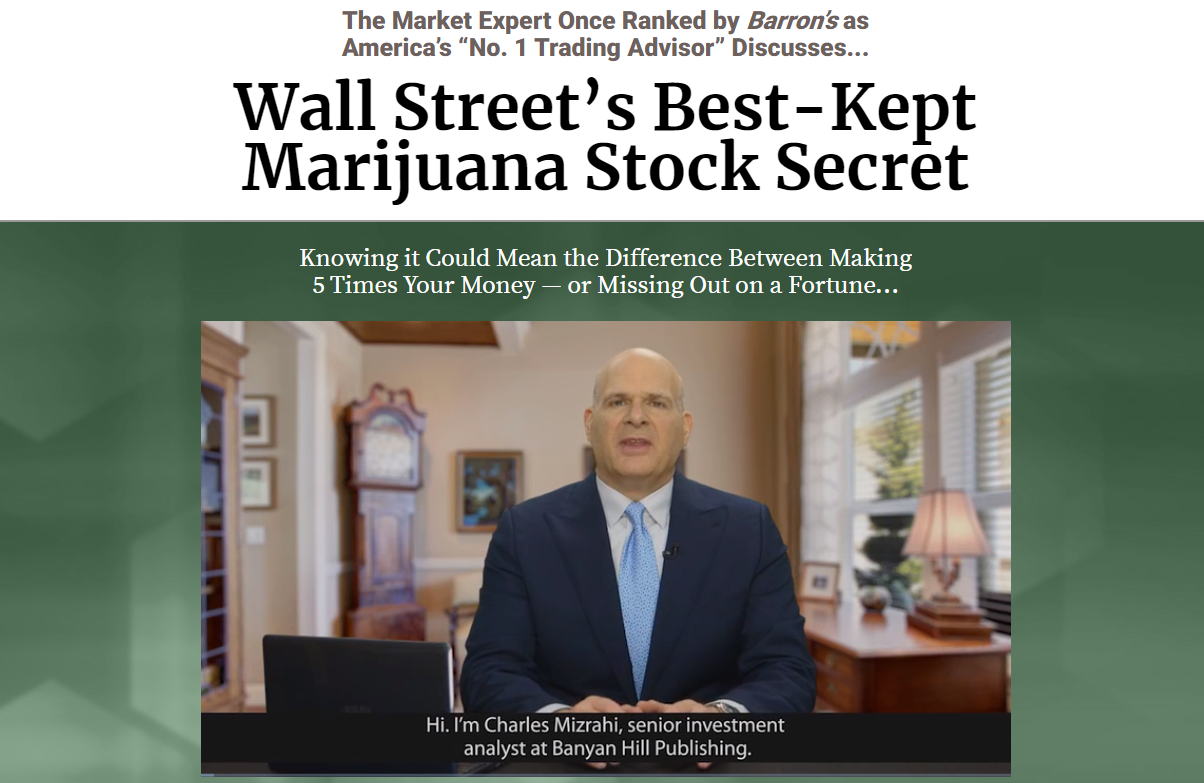 Both of these presentations tease the same marijuana stock and are re-hashed old presentations that have been somewhat updated, but actually still contain some outdated information.

But anyways, the presentations start off with talk about the marijuana boom that's upon us, how politicians that originally opposed legalization are slowly supporting it, how the industry is growing at a rapid pace... and then Mizrahi goes on to show a bunch of examples of cannabis companies that have rose massively in prices, such as Canopy Growth Corporation and Aurora Cannabis... 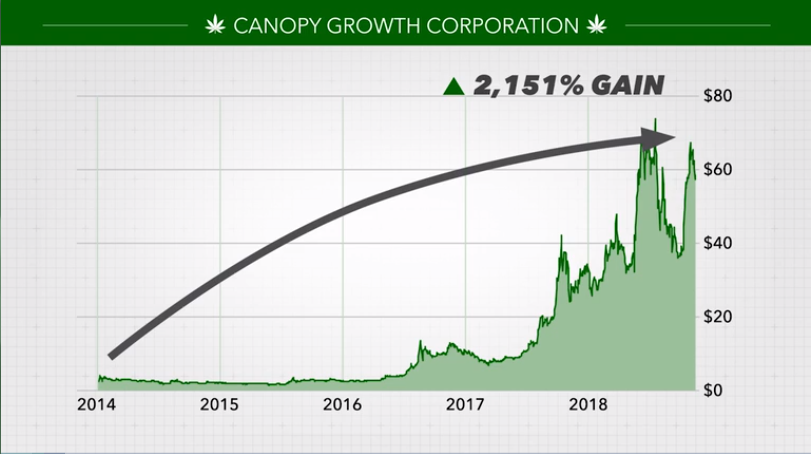 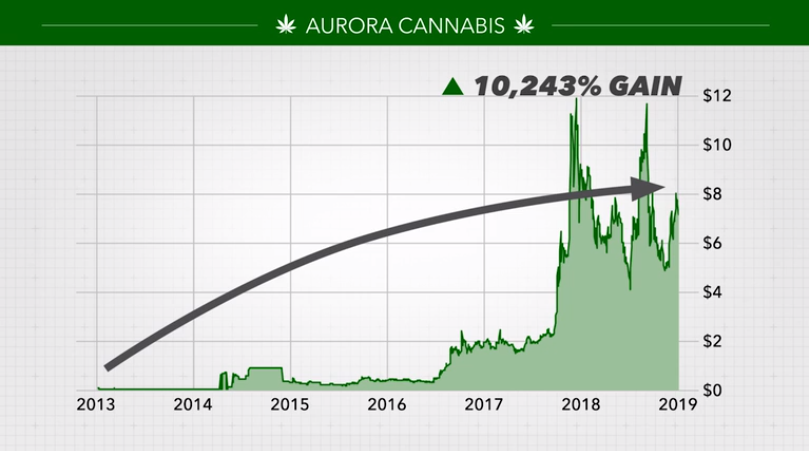 What he conveniently leaves out are all the marijuana companies that have failed in this volatile fledgling industry.

Nonetheless, this industry still has lots of great opportunities and the nationwide legalization of marijuana seems to be inevitable.

Some of the claims made about the particular "No. 1 Marijuana Stock" that he is teasing include:

He then goes on to talk about how the stock is what he calls a "pick and shovel" marijuana stock, meaning that it isn't directly involved in growing or selling marijuana, but is somewhat of a "tool" that is used by marijuana companies... and with this he talks about the old saying from the California Gold Rush: "don't mine the gold, sell the picks and shovels".

*Note: The guy is pretty bad at math. He keeps talking about how you could make 5x your money with this one stock and also says that it could turn every $10k into $60k... which would be 6x your money - but I guess either or would still be big profits.

If you were able to sit through the entire lengthy presentation then you know that Charles Mizrahi tells us that we can get his report "for free"... but first have to subscribe to his Alpha Investor Report newsletter advisory service.

In other words, you have to pay for the "free" report, indirectly. This is the same type of tricky marketing that is used for most of these investment advisory services nowadays, as was seen in the "Blue Gas" and "Ghost Money Trades" teasers that were exposed here at Green Bull Research recently.

This Alpha Investor Report newsletter service that he provides is, basically, a follow-along style advisory service where subscribers are told what to invest in and when... but let's not get into this too much.

Who Is Charles Mizrahi and Can You Trust Him? 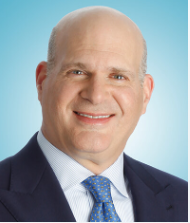 Charles Mizrahi is currently employed by the Banyan Hill publishing company where he runs the Alpha Investor and 8-Figure Fortunes investment advisory services.

His background is pretty solid. He started off on the New York Futures Exchange floor at 20 years old, has worked on Wall Street for over 30 years total where he managed over $200 million for clients like Goldman Sachs, Citigroup, Credit Suisse and others... and was ranked the #1 performing market timer by Barron's for a period of time. And, as expected, he's been on media outlets like CNBC to share his expertise - as well as having shared his expertise by teaching investing at New York University’s School of Continuing and Professional Studies.

In short, he has a good reputation and lots of relevant background experience, making him the type of guy you'd want to get investment advice from.

That said, I'm not all too thrilled with his "No 1 Marijuana Stock", which we'll go over now...

What Is This "No. 1 Marijuana Stock"?

It is made very clear that this company is not a marijuana company, but rather a company that stands to profit from the marijuana boom - or a "pick & shovel" company as he calls it.

There really aren't all that many clues provided, but luckily there were enough to figure out the stock he's teasing.

Some of the better clues we were told include:

So what's the stock?

The best match is The Brink’s Co. (BCO), which provides armored car transportation, money processing, vaulting and more. There's a good chance you've already heard of them because they are the most well-known name in the armored transport industry.

Here's why Brinks is a match...

Not only that, but the price charts he was showing during the presentation match up with Brinks.

Will this stock really soar 500% in the coming months and years like we are told? Will you really strike it rich if you invest right now?

One thing is for certain... claims like this are a far reach and you certainly should not expect these to materialize.

The stock has been doing well recently. The company was in a slump for a number of years and then the stock price shot up in 2016 and has been holding since...

But don't think that this increase was due to the marijuana boom. After all, their big deal with Canopy Growth Corporation didn't come until much later in 2018.

It appears that the increase in stock price was mainly due to restructuring going on inside the business at that time and improvements being made. During this time Brinks got a new CEO, had competitor acquisitions, buybacks and so on. There was a lot going on internally and not any major differences in revenue or anything like that.

The company appears to be solid right now, but the problem is that companies like this usually have very low net-profits. It's a good business and all, and is still needed, but how much can you really profit from a service like this?

That said, I was pretty surprised when looking at price forecasts that analysts have been making. There are all sorts of forecasts out there, but the 12-month forecast from analysts at CNN Business predict the stock could go 100%+ in price in the coming year... and even the low estimates are good. Sure, it's far from the 500% increase that Mizrahi predicts, but it's still a darn good amount.

Is it really a marijuana play?

BUT... is this a good marijuana play?

It's impossible to predict how much of an impact the marijuana boom will have on the company. If they are able to grab more and more business from other big marijuana companies then that is great. But how long can we really expect this to last?

Right now cash is king in the marijuana business because of banking rules that make this the only good option. However, these rules are likely going to relax and marijuana businesses will move toward using credit cards more and less cash... which would be bad news for Brinks. - but the good news is that they certainly aren't dependent on the marijuana boom... it will just be a nice boost for business.

Is Brinks a good investment? Most people agree it is at the moment, but Charles Mizrahi is just about the only one predicting a 500% price increase... and you have to keep in mind that his presentations end in a sales pitch.

And there you have it. Now you don't have to subscribe just to find out what this stock is.

Hopefully this review has helped and provided value to you. And if so, please share it to help spread the word.

Now it's your turn: Let me know what you think about this stock pick in the comment section below, or if you have any questions.