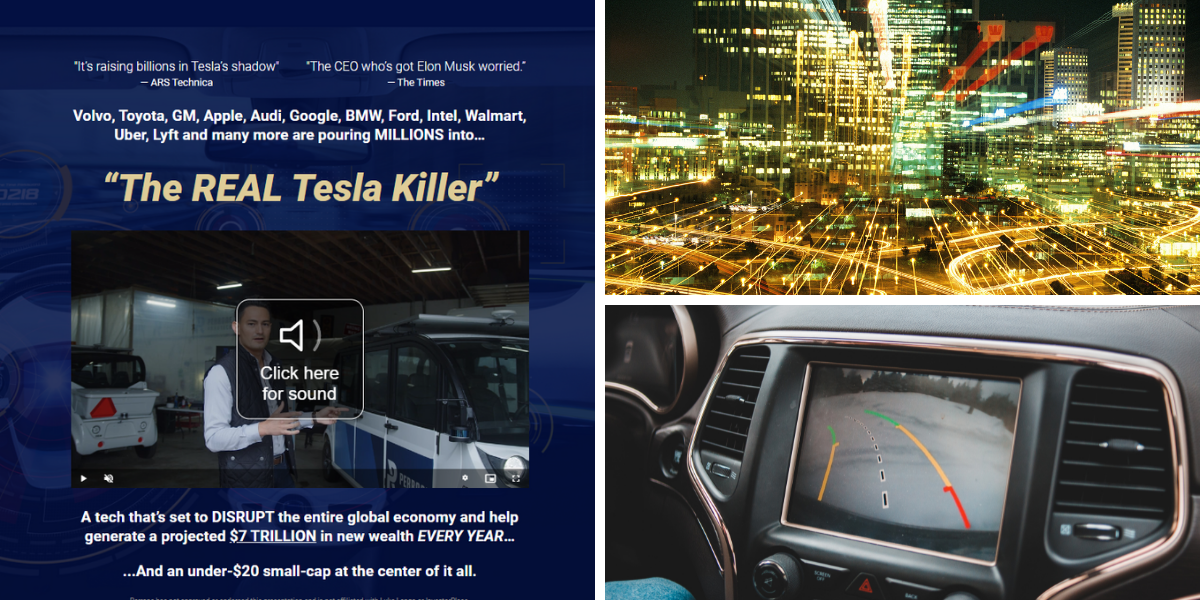 When is the last time you heard about a tech that’s set to disrupt the entire global economy and help generate a projected $7 trillion in new wealth every single year?

Luke Lango thinks he’s found “The Real Tesla Killer” and an under $20 small cap stock is at the center of it all.

Luke is confident that driverless cars are here NOW. Not in 6 months, not next year, and they are NOT manufactured by Tesla. Anyone paying attention has known for some time now that the transportation industry is on the brink of disruption…but is this transformation about to accelerate into next gear? Luke Lango is a growth-focused equities investor and analyst for InvestorPlace. Prior to InvestorPlace, Luke was the founding manager at L&F Capital Management, LLC, a boutique investment fund based in San Diego that combined quantimental analysis with behavioral economics to identify long-term growth investments while they were still in their early stages. Driverless car presentations seem to be all the rage nowadays and we have reviewed several here, including Matt McCall’s 5G Highway Stocks and Charles Mizrahi’s “Forever Battery” Stock.

According to Luke, a new technology has just been unleashed that will finally set this projected global $7 trillion a year megatrend in motion. It all starts with “a tiny device that’s no bigger than a thumb tack” It may not look like much, but this tiny device could soon change the lives of virtually everyone on the planet, including those who own and invest in this technology before it goes mainstream. Luke’s forecasts suggest that folks who get in on this opportunity now could see a 15x return in as little as 5 years – which would equate to turning $5,000 into $75,000.

If this seems a little far fetched, Luke promises to provide a demo of exactly what this tiny device does and exactly how its going to change the way we do EVERYTHING. From how we get to work to how we shop and even how we earn a living.

Luke is pitching us a membership to his venture capital-style research advisory Innovation Investor here. A subscription will run us at least $49 per year and includes the special report The Secret Startup Taking Driverless Mainstream, which includes the name, ticker symbol, and a full write-up on the “The Real Tesla Killer” startup. The offer also comes with 12 monthly issues of the Innovation Investor, a second special report – 3 World Changing AI Stocks to Buy NOW, and the VC Insider’s Millionaire Playbook, which is a special “member’s only” guide.

What is the Technology Behind The Real Tesla Killer Startup?

Without wasting any time or space: Groundbreaking LiDAR is the cornerstone technology that’s going to make fully self-driving cars a reality. This is the tech behind the startup that Luke is teasing and that is going to ignite the multi-trillion dollar driverless car revolution NOW, rather than 10 years from now.

Short for Light Detection and Ranging, LiDAR sensors are as small as a thumbtack, but extremely powerful. Simply put, LiDAR uses lasers to measure the distance between objects and the vehicle. It beams out lasers all around the car really rapidly, like machine gun fire. These lasers hit objects around the car, then they bounce back to the sensors. Once this again repeats itself over and over you will then have a highly detailed and extremely accurate 3D picture of the surrounding environment. So if LiDAR sensors are so great, why don’t we already see them everywhere? This is because until now, LiDAR sensors were very expensive. All throughout the early 2010s, LiDAR sensors cost as much as $75,000 per sensor! Thankfully due to certain technological improvements, the cost of LiDAR has plunged in recent years and the company Luke is talking about today produces breakthrough LiDAR sensors for less than $1,000.

This is a huge step if one in 10 vehicles are to be fully autonomous by 2030. Virtually every car maker on the planet racing to get this technology inside their vehicles doesn’t hurt matters either. Indeed, the list of companies investing in, planning to invest in or working with their own LiDAR technology is long, which is among the reasons Luke believes “this is the greatest technology opportunity of the decade”.

If Luke is right, driverless cars will become as normal and everyday as in-home streaming, online shopping, and personal computers. This would in turn make the little-known company he’s teasing into a $100 billion juggernaut in the AV industry. Yet, its current market cap is less than $6 billion.

Revealing the No. 1 LiDAR Company in the World

Luke reveals several key details about the LiDAR startup that he thinks will conquer the world.

Based on this set of clues, Luke’s top LiDAR pick is none other than Luminar Technologies Inc. (Nasdaq: LAZR). Here are some of the telltale signs:

The global LiDAR market size was valued at more than $1.5 billion in 2020 and it is expected to register a CAGR of 20% through 2027. Such a high rate of growth means more and more companies will enter the space in hopes of earning an excess return on their capital.

This has been happening, with more than 200 LiDAR startups in the automotive industry by some counts. With such a broad field and almost every company at a very early stage of development, this competition will hinder margins and profits over the next few years at the very least.

Luminar does have a collection of patents backing their powerful technology which is capable of producing LiDAR sensors cheaper than before. Being a low-cost producer is a form of competitive advantage, if it can be done profitably. Only time will tell if Luminar can emerge as this in the hyper-competitive space it operates in.

Do you agree that LiDAR technology is the key to mass adoption of driverless cars? Is this going to be THE industry that creates a massive amount of new wealth over the next few decades or will it be something else? Let us know in the comment section below.