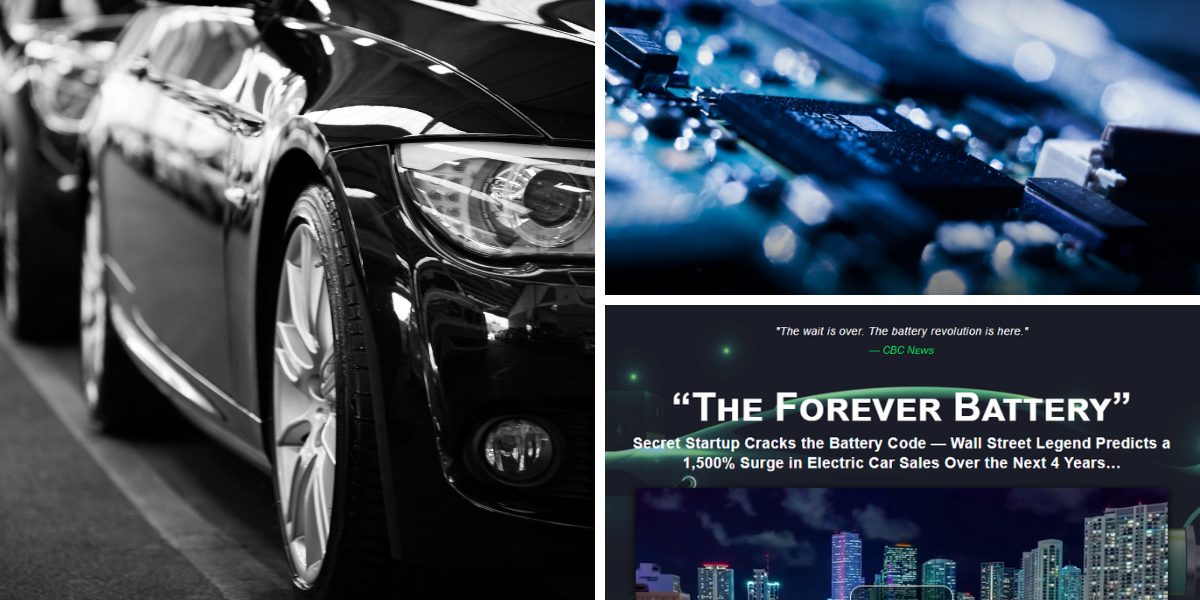 Its December 5, 1996 and the first electric vehicle just went on sale. Fast forward 21 years later to today and only 2% of the cars sold in the U.S. are electric vehicles, or EVs.

However, according to our host John Daly, this is about to change and FAST, as for the first time ever a technology that overcomes all the obstacles currently preventing EVs from going mainstream is available. Mizrahi call’s it the “Forever Battery” and we’re here to expose the stock he’s teasing.

Let’s take a closer look to find out what this could be.

Known simply as the “Forever Battery”, this new technology is being hailed as “the battery of the future”, “a game-changing innovation”, and “the battery that could change the world” according to Forbes. 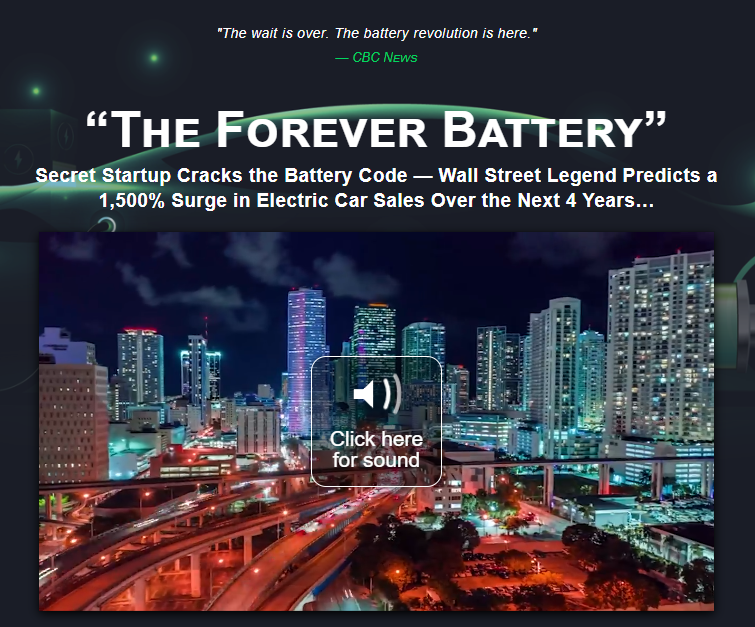 According to resident expert Charles Mizrahi, the Forever Battery could be a game-changer, as it’s set to disrupt two of the biggest industries in the world today: the $2 trillion automotive industry and the even bigger fossil fuel industry.

Charles Mizrahi began his financial career on the trading floor of the New York Futures Exchange at the age of 20 and has since amassed more than 35 years of experience recommending stocks under his belt. He’s been featured in The Wall Street Journal, Barron’s, The New York Times and MarketWatch, and made TV appearances on CNBC, in addition to writing a widely read book, Getting Started in Value Investing (Wiley).

A battery like this one is expected to allow electric vehicles, or EVs, to cost about the same as gas-powered cars by next year, which is about $25,000. This is because a so-called Forever Battery takes just 15 minutes to charge, weighs next to nothing, doesn’t burst into flames, and could soon power your EV for 1,000 miles — all on a single charge. To put this into perspective, this is many times of magnitude more efficient than even Tesla’s Model X. 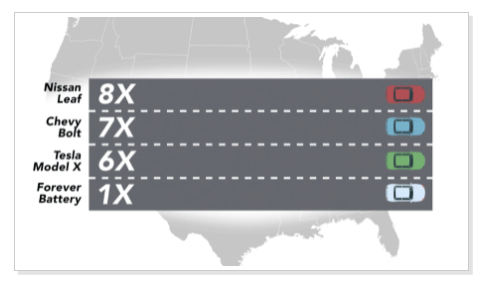 This is why the average EV currently costs $55,000, still out of reach for most Americans. However, if this new technology is successful in cutting the cost of a battery in half, as is currently being advertised, then it may not be long until every American highway will be teeming with EVs and every other house in your neighborhood will have one parked in the driveway.

From what we can see, this kind of breakthrough doesn’t come along every day. Thus, it comes as no surprise to hear that some of the world’s wealthiest people are investing heavily in the company that pioneered this Forever Battery technology. Let’s take a look under the hood to see if the underlying tech is for real.

You know the drill, in order to find out the name and ticker symbol of the company behind the Forever Battery technology, we will need to subscribe to Charles Mizrahi’s Alpha Investor, which will include The Forever Battery: How to Profit as EV Sales Grow 1,500% Over the Next 4 Years, special report thrown in for free. We have covered several of Charles’ presentations here in the past, including his “Miracle on Main Street” and SoE Stock among others. 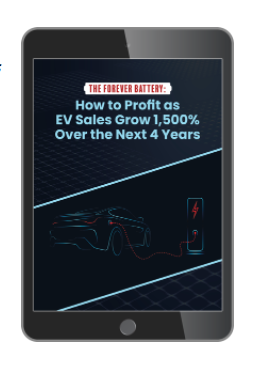 The subscription will also include a second special report entitled: A New Era of Energy Storage: The Hottest Breakthrough of the 21st Century, in addition to a model portfolio, 12 monthly research briefings, and access to a dedicated members-only website among other perks.

What in the World is Forever Battery Technology?

Charles calls the bombshell technology inside the Forever Battery “a gold rush in the making”. As Wright’s Law, which states that every time units of a product double, costs will fall by a constant percentage, all but assuring that EV’s will become more affordable.

The fact is, these new batteries are better than current EV batteries by every measure you can think of, from weight and safety, to range and charging time. This comes after 10 years of intensive research and development and the filing of more than 200 patent applications, with the end result being a battery that is about the size of a pack of cards. 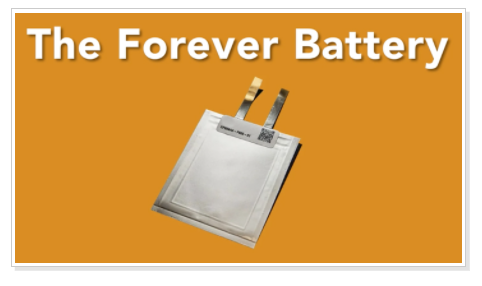 It is something scientists call a “solid-state battery”. These batteries are completely different from lithium-ion batteries, which have a liquid core, that can cause a vehicle or device to burst into flames without warning. The solid core of the Forever Battery is NOT flammable, so there’s no danger of explosion or fire.

Perhaps the best part about solid-state battery is that its solid-state core take as little as 15 minutes to charge, degrading far less than its liquid core battery counterpart, meaning it lasts longer. All around, solid-state batteries are smaller, lighter, safer, more powerful, and more convenient than current EV batteries.

Since the main catalyst driving mass adoption is affordability and the solid-state battery could cut the price of an EV in half, it could very well make EVs affordable enough for the average American family (inflation included). This could literally change the world and it’s why Charles is adamant we take advantage of this opportunity right away. Let’s see if we can identify the company at the heart of it all.

A few key clues were dropped throughout the presentation, which we noted:

Based on this description, we would venture to say that the solid-state battery manufacturer in question is QuantumScape Corp. (NYSE: QS). This is why:

So is QuantumScape’s technology really the hottest breakthrough of the 21st century?

Best Investment Opportunity of Our Lifetime?

A lofty claim to make about a startup developing a solid-state lithium battery for electric vehicles or any company for that matter, but the quantum leap this technology could spell warrants it.

As electric vehicle adoption ramps up – 1,500% surge in EV sales over the next four years according to Charles, any stock at the forefront of this should see a boost right? Undoubtedly, but between upcoming monetary tightening and a rise in interest rates, stocks, in general, are more than likely to move lower before another bull run.

When it comes to the company’s individual prospects, a lot of questions still remain unanswered about its next-generation solid-state lithium-metal batteries, as there isn’t much to go on at the moment apart from what the company has revealed in its investor presentations. Given this and the fact that the company isn’t likely to produce any significant revenue until at least 2024 -until which time a lot can happen, including material developments on the competitive front, tells us that is speculation rather than an investment at this point in time.

Are you already invested in the electric vehicle space? Are solid-state batteries the answer that will unlock electric vehicle adoption on a mass scale or is it something else? Let us know what you think in the comment section below.