In one of his latest newsletters, energy investor Keith Kohl teases a brand new type of fuel that will supposedly undercut every other form, thanks to the breakthrough of one small company in the field of nuclear fuel technology. He claims those who get in early on this investment opportunity “can turn each $5,000 investment into a $1.2 million profit”.

He calls this world-changing, scientific discovery “TriFuel-238” and says that “the immense power it holds is hard to grasp”. Lets find out exactly what is being pitched.

The author starts his presentation aggressively by saying that what he is about to let us in on is a $48.78 billion cash-grab opportunity and he claims we can make up to 46,018% off just one stock, should we get in early.

Keith Kohl is the chief investment publisher at Angel Publishing, specializing in the energy sector. Over the long run, he says his average return has crushed the S&P 500 by an incredible 78%. That said, Keith is known for his bold takes and he is always looking for new and reliable sources of alternative energy. We have previously covered some of Keith Kohl’s teasers in the past, including his “5G Volta” Company and a Texas Oil Company.

According to Keith, you should forget about batteries and solar as “real renewable energy cheaper than a cup of coffee from a rest stop” is now available. He continues by stating that “it’s not solar, wind, or anything else that needs Mother Nature in order to function or anything like scarce resources, such as coal, oil, or gas”. So, what is it then? He talks about a “contorted metal fuel” and that “a rod of this twisted fuel no bigger than 35 nickels stacked together could power your entire home for 15 years”.

To better understand the opportunity, Kohl talks about how the current government “is now diverting an incredible $775 million per year into operations like TriFuel-238”. He is also convinced “that TriFuel-238 will start going mainstream in just a matter of months”.

This scaling up in direct alternative energy investments is because America is dealing with a “silent energy crisis” brought on by exponentially higher energy consumption compared to just a few years ago. As houses employ more integrated “smart technology” and we become even more reliant on the Internet to power our everyday activities, energy consumption is set to increase by up to 300% over the next five years.

Given this context, Kohl’s pitch is definitely timely if nothing else. But he assures us that the company he teases is not only developing a new type of 100% green energy, he also says that it can be used by simple upgrading older power plants, at little additional cost. He says “any old coal plant can generate power from TriFuel-238 with a simple upgrade”, which means that, as soon as it is approved by utility regulators, the energy could easily get into the hands of millions of Americans.

In this end this is another pitch from Angel Publishing, which have become rather notorious for not giving away too many details. This is why we are encouraged to subscribe to Keith Kohl’s investment newsletter Energy Investor, for $99 per year, if we want to find out the name of the company being teased. 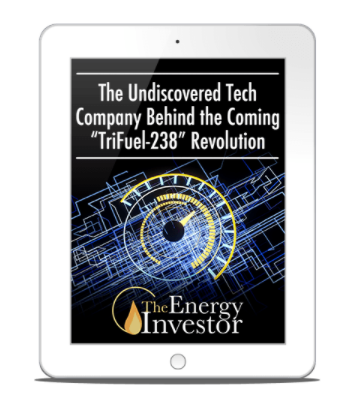 Included in this offer, you will receive the bonus report “The Undiscovered Tech Company Behind the Coming TriFuel-238’ Revolution”, as well as two additional bonus reports, monthly issues with at least one new investment opportunity, 24/7 access to a model portfolio, as well as a free subscription to the “Energy and Capital” e-newsletter.

All we know this far is that this new “metal fuel” relies on nuclear power and that it is also 100% renewable. Moreover, it doesn’t rely on any of Mother Nature’s elements and can be easily stored and delivered using the same power plants that have existed for decades, which means cheaper maintenance costs and little to no upfront costs at the beginning.

Although we already have renewable energy sources including hydrogen, wind, and water, the main problem with these technologies is the lack of a proper way to store the excess – solar and wind power cannot be stored, which translates into the extra energy always going to waste, whereas hydrogen-based energy requires a more complicated system to extract and hence, higher initial costs.

According to numbers from the U.S. Energy Information Administration, after sourcing, building, and labor, and all other costs are factored in, “TriFuel-238” comes out the cheapest of them all! 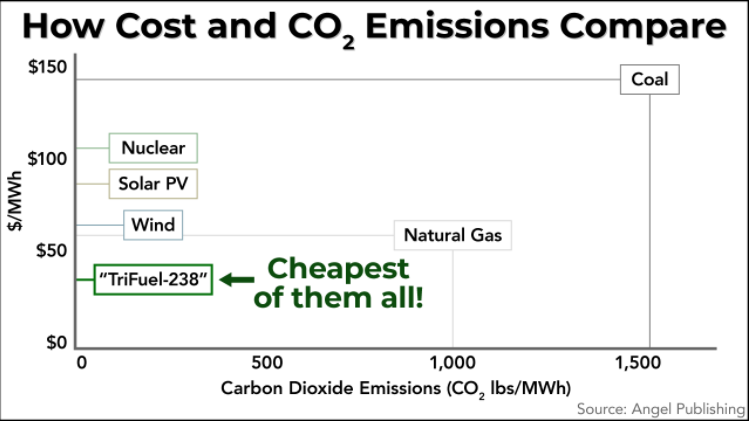 The true innovation about TriFuel-238 is using the same plant system now in place to deliver 100% sustainable energy – something Keith calls “a breathtaking technological advancement”.  At the end of the day, TriFuel is nuclear fuel technology, which is pioneering a new type of metallic fuel rod that may be significantly more economical and safer than traditional fuel rods.

If you are not familiar with fuel rods (who is, except for nuclear scientists) fuel rods are the base element of a fuel assembly. They are the first barrier which retains radioactive material within the fuel and protects the environment. TriFuel is supposed to do a better job at this, at a lower cost as well.

Now lets find out if this “twisted” energy tech really will become the world’s go-to energy solution and more importantly try to reveal the tiny 13-man operation behind it all.

When talking about the company behind this innovative energy technology, Kohl remains vague. But here are some of the details that the author does offers us:

Based on these veiled clues and our own sleuth work, we think the company Keith is teasing here is: Lightbridge Corp. (Nasdaq: LTBR). Here is what gave it away:

In its own words, Lightbridge “is focused on developing and commercializing metallic nuclear fuels that could enhance resistance of nuclear fuel in existing and new nuclear reactors”.

It is currently a $40 million market cap, pre-revenue business, losing about $15 million annually. While this doesn’t paint a very pretty picture (downright ugly actually), it does possess some proprietary, international patent-pending tech that could potentially improve the economics, proliferation resistance, and safety of nuclear power. Will this be enough to engender a potential 46,000% return? Perhaps…in your grandchildren’s lifetime, but definitely not over the short/mid-term.

What are your thoughts on this nuclear fuel tech? Are you already invested in some emerging energy tech businesses? Let us know in the comment section below.