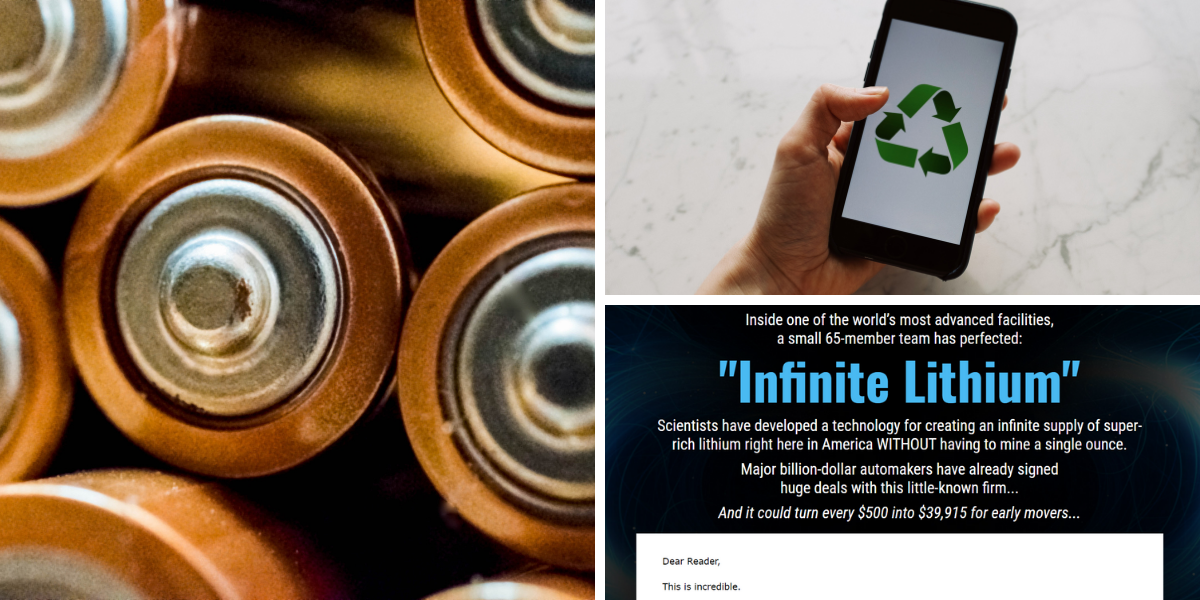 Global consumption of lithium is soaring on account of record high electric vehicle demand, among many others factors and Keith Kohl tells us that scientists have developed a “Infinite Lithium” technology for creating an almost limitless supply of it right here in America WITHOUT having to mine a single ounce.

This development could turn every $500 into $39,915 for early movers…if you keep reading.

China controls a staggering 70% of the global lithium market, but this could all be about to change as a small 65-person team of engineers just changed the course of America’s energy history.

Energy and Capital editor Keith Kohl provides in-depth coverage on the hottest investment trends in the market today, from energy and technology, to the latest advances in biotech. For nearly two decades, Keith has covered and called major market developments, including the EV revolution, the ongoing 5G roll-out, as well as the emergence of automation. With the rapid rise of lithium, we have covered several related presentations here. Including Dave Forest’s $4 Lithium Company and Charles Mizrahi’s “Forever Battery” Stock.

This is because they have created a way to generate NEW supplies of high-quality lithium in America, on-demand, without mining a single ounce of it. Not only this, but the lithium production process is 100% emission-free. It doesn’t even waste a single drop of water! According to Keith, “its even cheaper than the cost of traditional lithium mining”.

Just how much money would automakers, battery makers, smartphone makers, and governments worldwide pay for access to a reliable, endless source of high-grade lithium. The answer is untold BILLIONS! These are already starting to pour in, with this firm already racking up $985 MILLION worth of deals from some of the largest automakers and battery manufacturers on the planet.

This is one of a few reasons why this group of scientists and engineers, with their proprietary “Infinite Lithium” breakthrough could make you a killing! So what’s really behind the technology and is it really as crazy as it may sound?

If you’re at all familiar with Keith’s presentations, then you already know what’s coming next and that’s a pitch to subscribe to his Energy Investor, which he says is the only source for full research on “Infinite Lithium”.  This costs $99 and of course includes full access to the free report, “Infinite Lithium’: How to Get in on the Ground Floor of the Energy Breakthrough of the Century”. Also included in the offer are two free bonus reports – “The Apex Charger: Hidden Life-Changing Gains From the EV Revolution” and “The Undiscovered Tech Company Behind the Coming ‘TriFuel-238’ Revolution”, in addition to monthly issues, access to an investment thesis archive, and more.

What in the World is “Infinite Lithium”?

A major lithium supply shortage is brewing, some are predicting that demand for lithium is poised to grow by over 4,000% by 2040. Per Carbon Brief, the International Energy Agency warns that “at least 30 times as much lithium, nickel, and other key minerals may be required by the electric car industry by 2040 to meet global climate targets”. This is just what the electric vehicle industry needs.

UBS even says that by 2025, the surging demand for lithium will most likely outgrow the supply of ALL known lithium mining projects in the world today. This is why this mystery company’s breakthrough “Infinite Lithium” technology could be the answer and could also reward smart investors who get in now with huge gains.

Keith confides that in one of the world’s most advanced labs, a group of engineers has literally “cracked the code” to the clean energy revolution. Most folks may not realize this, but lithium mining is an incredibly energy-intensive process, one that uses a slew of toxic chemicals and it wreaks havoc on local ecosystems.

But this firm’s proprietary technology solves the globe’s harmful lithium mining problem. There are NO toxic chemicals used in its entire lithium production process. It doesn’t produce any emissions or wastewater and there is no risk of fire or explosion. Right now, its proprietary process can create enough material to power a whopping 20,000 electric cars per year. But Keith says this is just the beginning, because this firm has just built the largest “Infinite Lithium” factory in North America.

It’s a $175 million state-of-the-art facility, and it’s right here in the USA. Construction is also underway for several more of these unique facilities across the country in places like Arizona and Alabama and the more labs this company has, the more lithium it can produce.

What we are talking about here is using technology to recycle lithium from lithium-ion batteries lithium-ion (Li-ion) batteries. Which are a form of advanced battery technology that uses lithium ions as a key component in its electrochemistry and there’s one company that is set to experience up to an incredible 7,883% surge in revenue thanks to its proprietary technology.

Keith shared quite a bit of clues with us about this company, see if you can’t tell what it is:

Did you guess it? The company being teased here is Li-Cycle Holdings Corp. (NYSE: LICY).

Li-Cycle is a battery recycler that offers a mix of cathode and anode battery materials, including lithium.  The Toronto-based company merged with Peridot Acquisition Corp. this past August in a SPAC deal, with the new company becoming known as the Li-Cycle Holdings Corp. we know today.

Lithium is the core material for the lithium-ion battery industry and it is now being extracted from natural minerals and brines, but the processes are complex and consume a large amount of energy, as Keith states. This has led to the development of technologies to recycle lithium from lithium-ion batteries, however this is nothing new.

Several companies including Retriev Technologies, American Zinc Recycling, Lithion Recycling Inc., and American Manganese Inc., among others are already working on similar solutions, making it very difficult to get and stay ahead in the rapidly advancing battery recycling field. Unsurprisingly, Li-Cycle is currently in the red and may take years to return capital to shareholders, given its very high annual capital expenditures.

Some exposure to the rapidly growing sector would be beneficial, but we can easily and cost-effectively do this through an ETF like the Global X Lithium & Battery Tech ETF (NYSE: LIT) and others.

Are technologies to recycle lithium from lithium-ion batteries the answer to the lithium supply challenges? Let us know what you think in the comment section below.