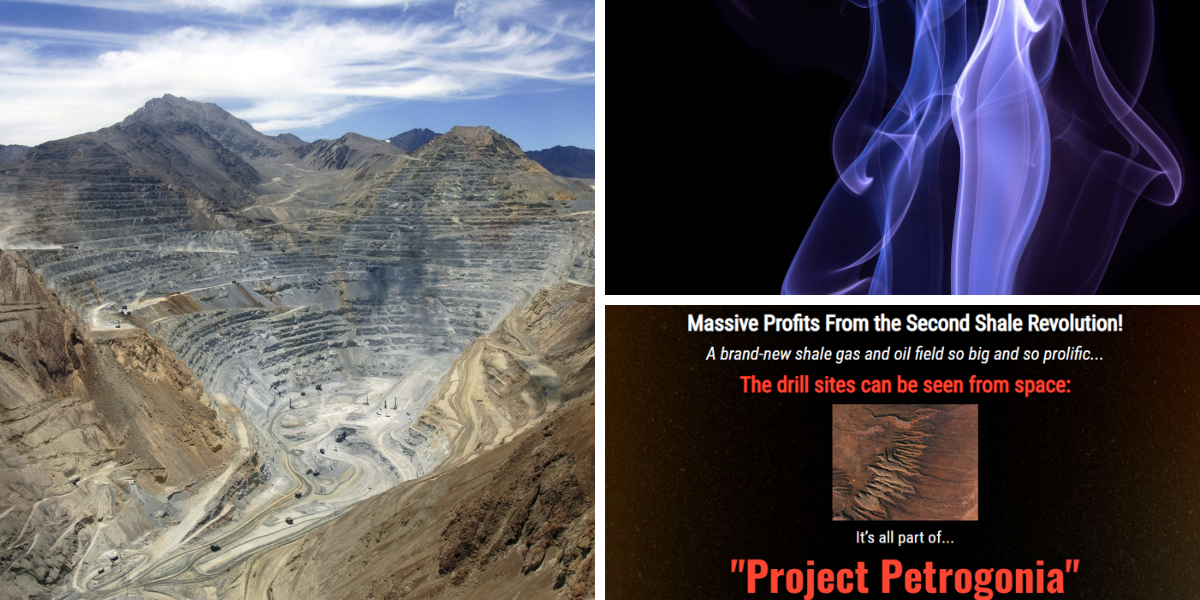 A brand new shale oil and gas field so big and so prolific that it can be seen all the way up from space has been discovered!

It’s part of “Project Petrogonia” which is helping create a second shale revolution and there’s one tiny $5 company that owns about 40% of it all.

Nestled between the Andes Mountains and the Neuquen River lies the current global epicenter of the oil and gas industry. That’s right, it’s in South America and Argentina to be exact.

The Junior Mining Trader’s Luke Burgess is a Baltimore native and self-described investing nerd, who began paper-trading stocks around the age of 11. As time went on, he developed a lifelong interest and passion for natural resources and mining, particularly gold and silver. We have covered some of Luke’s past presentations here, including his #1 Gold Stock of the Decade and “Miracle Mineral” Company.

Luke begins explaining that this region is ideal for oil and gas production, for a few reasons. For starters, this oil and gas basin encompasses over 30,000 square miles. That’s 15X bigger than the Grand Canyon National Park. It’s also chalk full of oil and gas, with the Journal of Petroleum Technology saying that “Well productivity in this area competes with the best of U.S. shale, with 30-year estimated ultimate recoveries”.

There is also the fact that the current administration’s “Green New Deal” is devastating oil production in the U.S. to the tune of nearly three million barrels a day. The new regulatory regime and threats of antitrust sanctions, along with pressure put on financial institutions to exit the fossil fuel credit markets has all but frozen crude oil production in the United States.

This is all happening at a time when oil and gas prices are hitting multi-year highs and if certain macro economic indicators, like the U.S. money supply are any signal, they are about to go much higher.

The Federal Reserve just created $6.2 trillion in the past 24 months and as the velocity of this money increases – the more it circulates and exchanges hands, the more prices of goods and services will be bid up, as we are only at the beginning of this vicious cycle.

All the specific details about this mostly unknown company are inside a brand-new investment report titled “Project Petrogonia: Dawn of the Second Shale Revolution”.

It is ours when we sign up for a 90 day risk-free trial to the Junior Mining Trader. The price of membership is “just” $1,999 and includes a complimentary subscription to Outsider Club, flash updates on the hottest moneymakers in the junior mining and natural resource sectors delivered straight to your inbox, private access to a secure Junior Mining Trader members-only website, and more.

What in the World is “Project Petrogonia”?

At a total size of 7.5 million acres across four provinces –  Neuquén, Mendoza, Río Negro, and La Pampa. The Energy Information Administration (EIA) calculates Vaca Muerta’s non-conventional gas resources to be the second largest in the world, after the Eagle Ford Basins of Texas.

Every tiny little dot we see is a huge drill pad and there are hundreds of them that dot the landscape.

If experts are right in saying that Vaca Muerta, which translates to “Dead Cow” (admittedly not the best name for an investment), is like going back in time to the start of the Bakken shale boom in North Dakota that began in late 2008, then investors could be in for some enormous gains.

Take for example a small, unheard-of oil producer working in the Bakken, like Continental Resources. Between the time Continental went public in 2007 and 2014, the company’s stock gained over 1,000%.

Or another early player in the Bakken, Northern Oil and Gas, whose stock spiked 110% in just six months and more than 1,300% in three years just as the Bakken was taking off.

Just like these examples, Luke believes his “Project Petrogonia” stock will easily post a 400% gain in short order, before eventually gaining well over 1,000%. In fact, this producer is already on its way. As its revenue is soaring, growing by 56% amidst an 80% increase in shale production from its Vaca Muerta project over the past three years.

It’s done all this in one of the most challenging energy markets in memory, as COVID-19 crushed economies all across the globe. Let’s find out the name and ticker of this driller.

Luke reveals quite a bit about his play. Here is everything he’s told us about it thus far:

Based on this set of clues, the company in question is YPF Sociedad Anónima (NYSE: YPF). Here are the dead giveaways:

The first thing to know about YPF is that it is a majority state-owned Argentine energy company. In the U.S., mortgage companies like Fannie Mae and Freddie Mac are among the most notable examples of state owned enterprises (SOE).

It goes without saying that there are significant risks to investing your hard earned money into a SOE. Government and shareholder interests very often diverge and at SOE’s, political interests almost always win out. We found some long-term empirical evidence of this in action:

On the other hand, YPF also owns a controlling stake in Metrogas (Argentina’s largest gas distributor), which effectively makes it a government-backed monopoly and “too big to fail”, which has its benefits.

The 49% of YPF that is not government owned, is currently trading at a huge mark-up of over 700x current earnings. This is a lofty figure to live up to, even if new Vaca Muerta shale finds materialize, which is far from a given.

Is YPF a high-risk, high-reward opportunity that you would invest in? Tell us your thoughts in the comment section below.