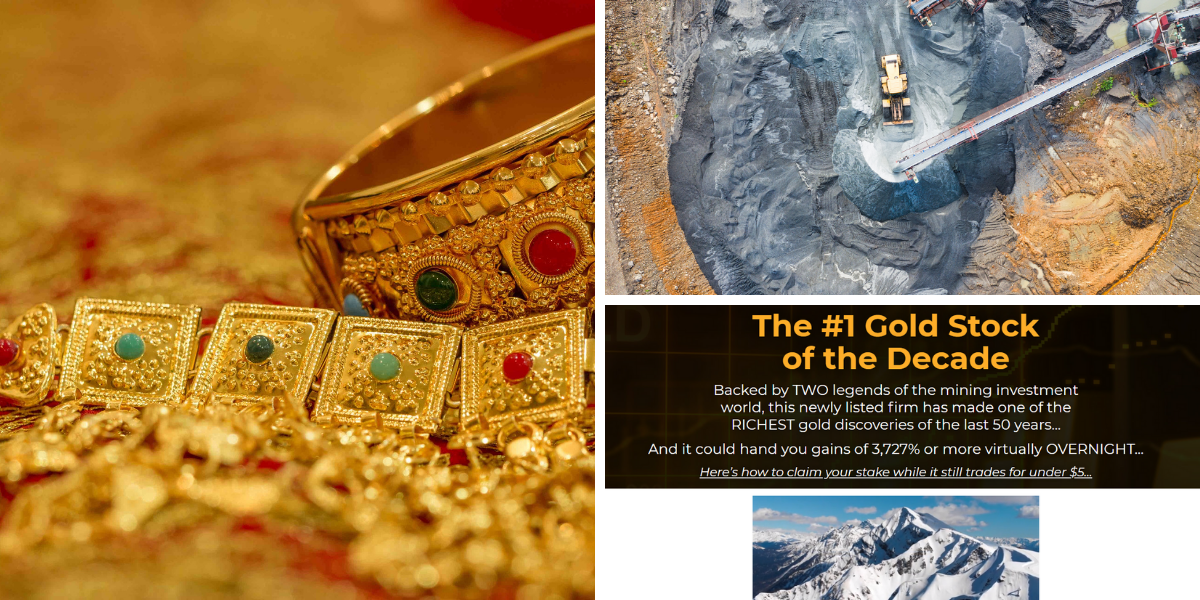 If you’ve ever dreamed of striking it rich mining for gold, then you’re going to want to hear what we’re about to say. Luke Burgess is claiming he has discovered the “#1 Gold Stock of the Decade”.

He tells us that this stock is backed by not one, but two legends of the mining world and that the newly listed firm behind it has made “one of the richest gold discoveries of the last 50 years”, let’s inspect these claims.

We learn that this historic gold discovery is located deep in the remote mountains of one of the coldest places in North America. It is here that we will discover one of the highest-grade gold finds in the entire world.

Luke Burgess is a self-admitted “gold bug”, but he brings a levelheaded approach to precious metal investing that proves rational thinking in a largely emotional market can be incredibly profitable. Today, Luke is a writer and editor for the Outsider Club’s Junior Mining Trader and also maintains his own private investment portfolio. We have covered other mining presentations here in the past, including Bill Shaw’s $4 Nickel Royalty Stock and Dave Forest’s Neodymium “5G Metal” Company, among others.

Getting back to our gold discovery, Luke says it “could be worth billions of dollars” and as a direct result “make today’s investors magnificently rich”. This is because the discovery is 100% owned by a publicly traded company, whose shares are trading for under $4 (as of Q1 2021).

Initial drill results in the area around the property back up these claims, with the report showing “abundant evidence of additional high-grade findings across the property”. Additionally, tilt samples are also displaying free gold, leading the geologist in charge to proclaim that “the project is vastly underdeveloped”. Luke also calls it “one of the biggest money-making opportunities” he’s seen, with potential of 3,700% returns.

Apparently, they aren’t the only two singing the praises of this gold mining project, as “two of the mining world’s biggest legends” are also invested in the company that owns this project. One runs an asset management firm that manages $11 billion dollars and is one of the company’s largest shareholders and the other is “the most esteemed gold executive in Vancouver” and he also owns a massive position.

With exciting drill results and some heavyweight backing, this company could be the next miner to breakout.

Luke is attempting to win subscribers over to the Junior Mining Trader investment newsletter, which costs $2,499 at its lowest rate, with a 90 day risk-free trial. The price includes the “Newfoundland’s NEW Riches: The Junior Gold Stock That Could Make You Huge Gains” special report containing the name and ticker symbol of the #1 Gold Stock of the Decade, as well as e-alerts on other opportunities throughout the precious metals mining sector and a members-only website, with private member reports, analysis, and stock picks.

Luke believes this discovery is poised to eclipse all other mining discoveries made in the past decade.

Part of his confidence stems from the fact that it recorded “the single best drill hole in the history of the mining jurisdiction” in which it is located. This location is the Canadian province of Newfoundland, which has recently become one of the hottest spots in the world for gold exploration.

The province has a long history of gold and precious metals mining, but few outside the junior mining world are aware of what’s going on up in Newfoundland. This sentiment is seconded by Dr. Quinton Hennigh, who is the renowned geologist behind Kirkland Lake Gold and Novo Resources, among others, who says that this company’s discovery is “a potential second swan zone”, referring to Kirkland Lake’s massive high-grade gold mine in southeastern Australia.

Hennigh explains that not only is this firm’s discovery “extremely rare”, but the shallow depth of it, at less than 1/10th of a mile beneath the surface, makes extracting any potential gold “much easier, cheaper, and faster”.

Another thing this gold miner has going for it is the sheer enormity of its exploration property at some 373,000 acres. This easily makes it the largest mineral claimholder in the province and its drilling program one of the largest in the world, with a total length of about 125 miles when all is going to be said and done. Under normal circumstances this would be easy to dismiss, but Dr. Hennigh thinks “the entire property is prospective”, meaning the potential for multiple high-grade gold discoveries within this large land package is very likely.

How can we be first in line to get in on this new gold rush?

Revealing the #1 Gold Stock of the Decade

Luckily, Luke revealed just enough clues to lead us directly to the miner behind the richest gold discovery of the last 50 years.

Based on such claims, we’re sure the company Luke is talking about here is New Found Gold Corp. (TSX-V: NFG.V) Here is what gave it away:

I should qualify upfront that junior mining/exploration is a specialized corner of the market, which I have no particular insight into. Having said that, New Found Gold is far from typical. Even someone who doesn’t typically invest in exploration companies can see that.

So some of the hype that New Found Gold is getting is wholly warranted. After all, the company is still newly listed, its shares have only commenced trading in September, it is still relatively small at a market cap of just over $1 billion dollars and it remains largely undiscovered by most analysts and investors. In short, it has a lot of potential. Not only as a standalone concern, but as a potential acquisition target, given the rising price of gold and its solid drilling results to date.

Do precious metals explorers already make up a part of your portfolio? Are there any other exploration projects out there with the same potential as New Found Gold? Let us know in the comment section below.