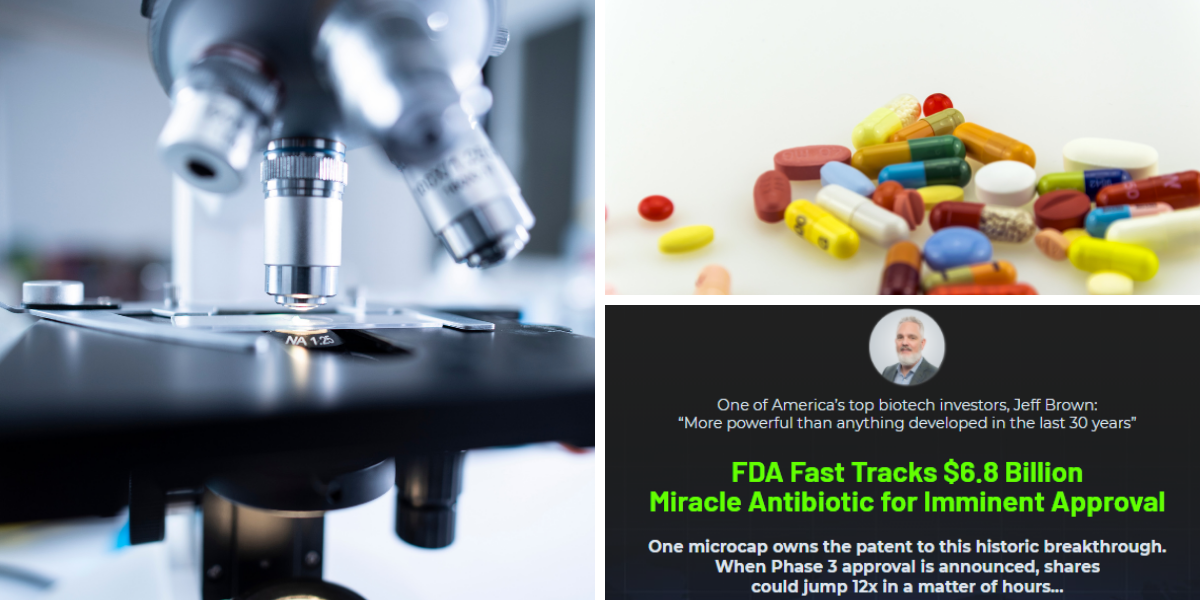 Self-proclaimed biotech expert and Angel Publishing author, Jeff Brown claims to have identified a microcap biotech company that owns the patent to “the most powerful antibiotic in history”. In his latest marketing pitch, Brown mentions that “when Phase 3 approval is announced, shares of this miracle antibiotic company could jump 12x in a matter of hours” and tries to make sure you’ll have front seat tickets to this game-changing event.

To get the name and the ticker symbol of the microcap stock teased in his marketing ad, Jeff Brown urges you to subscribe to his newsletter: Exponential Tech Investor for $2,000 for a two-year plan. Included in the deal you’ll find the report “The Miracle Cure: How to Profit From the Next Generation of Antibiotics” that contains the name of the company being teased, as well as two other free reports, a 20-page briefing monthly, support service, and private access to a members-only website. But before you reach for your wallet, we are going to try to reveal the name of this biotech company here in this article for free. So keep reading. 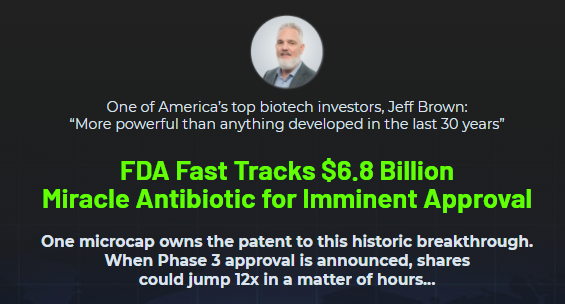 Jeff Brown is the founder and chief investment analyst for Brownstone Research and, before that, he spent 25 years as a high-tech executive. He has a wide range of technology industry experience, from video tech to tech infrastructure, semiconductors, automotive, and even consumer electronics.

Brown spent years working for NXP Semiconductors and Qualcomm and mainly focuses on identifying new microcaps that can soar in just a few months. Currently, he is the author behind the e-letter The Bleeding Edge and publishes another two services, the Exponential Tech Investor and Near Future Report.

The author starts his letter by saying that, despite the medical breakthroughs of the last few decades, we are still using antibiotics made in the 1980’s for which bacteria have developed resistance, thus making them less effective. According to him, “antibacterial infections are killing people at a rate similar to the Middle Ages”, giving the example of the latest worldwide Coronavirus pandemic that has already killed more than 1.12 million people worldwide, with over 40 million cases registered.

As other authors before him have also predicted: Project Greenlight Biotech Investments and The $5 Biotech Stock Revolutionizing Health Care, Brown thinks bio companies are set to soar in the next few years, even more so than microcaps in other high flying sectors such as 5G or semiconductors.

In his words, the microcap he teases will capture a significant share of the $6.8 billion antibiotic market and, as a result, its shares will rise exponentially in a matter of months. Brown says that the FDA has already fast-tracked the approval of the antibiotic created and patented by this company, allowing it to skip Phase 2 trials entirely and focus on Phase 3, the final barrier before this revolutionary antibiotic is ready for mass production and distribution.

Biotech microcaps carry the potential of skyrocketing but given that the FDA’s approval timeline for new drugs and supplements can take years, sometimes even a decade, it’s safe to say you can never quite be sure about the timing. If you are really interested specifically in biotech and biology stocks, it would be better to start looking at companies that have already been publicly traded for a few years already and have completed at least Stage 2 trials for their potential products.

The Biotech Company Being Teased

There aren’t many clues given throughout the teaser about this stock, so let’s see what we were able to dig up.

Unfortunately, this is about everything that he lets slip, so it wasn’t enough to come up with a clear winner. However, we do have a potential candidate that you might want to check out as it ticks some of the boxes Brown mentions.

First off, Entasis Therapeutics (NASDAQ: ETTX). The company was established in 2015 as a spin-out from and with initial funding from AstraZeneca, and all rights to AstraZeneca’s industry-leading discovery and early development small-molecule anti-infectives portfolio.

The company is part of the Carb-X program, “supporting the development of antibiotics, vaccines, rapid diagnostics, and other life-saving products to tackle drug-resistant bacteria”, and this is exactly what Entasis Therapeutics does. The Carb-X initiative is funded, amongst others, by the Bill Gates foundation, and our company is the only one to receive two funding awards from Carb-X, one of which is up to $10 million for further research and development.

What’s interesting is that Entasis Therapeutics also received “funding from the U.S. Department of Defense that is structured as a two-year $1.1 million award and supports the development of anti-infective agents to combat Gram-negative bacteria”, ticking nearly all the boxes Brown mentions in his marketing campaign. The company is currently in Phase 3 trials with its first oral treatment of gonorrhea, zoliflodacin.

As we previously mentioned, there isn’t enough clinching information in Brown’s teaser to be 100% positive of the stock he’s promoting, so the company presented above is a best guess. Albeit an educated one.

Is This The Most Powerful Antibiotic Ever?

Entasis Therapeutics is an untraditional microcap because it was created as a spin-off from AstraZeneca, one of the world’s largest pharmaceutical company’s. With its vaccine already being in Phase 3 trials and with the FDA’s prior approval, it shouldn’t take more than a couple of years before it will be ready to be mass-produced from this point forward, barring any untoward developments or final trial setbacks.

The pharmaceutical market, although a well established one, is not the first one investors should consider if they are looking for rapid gains. Pharma stocks tend to mature later than others and in many cases, even if what they are developing seems promising, it fails to get the FDA’s approval through three-phase trials. This means they won’t ultimately be able to go to market with what they have been working on for years and its back to the drawing board. In other cases, developing a vaccine or a new group of antibiotics could take a decade or more of medical studies and research.

Therefore, if the long game isn’t really your thing, microcaps from just about any other sector will likely prove a better choice for short/intermediate timelines. Biotech stocks take time to mature, so you need to be patient and really buy into the team and the story over the long haul if you do decide to dip your toe into this highly specialized sector.

What do you think about the biotech sector? Are you currently invested in any biotech companies that are working on bringing cool new discoveries to market? Let us know about your experience in the comments below.