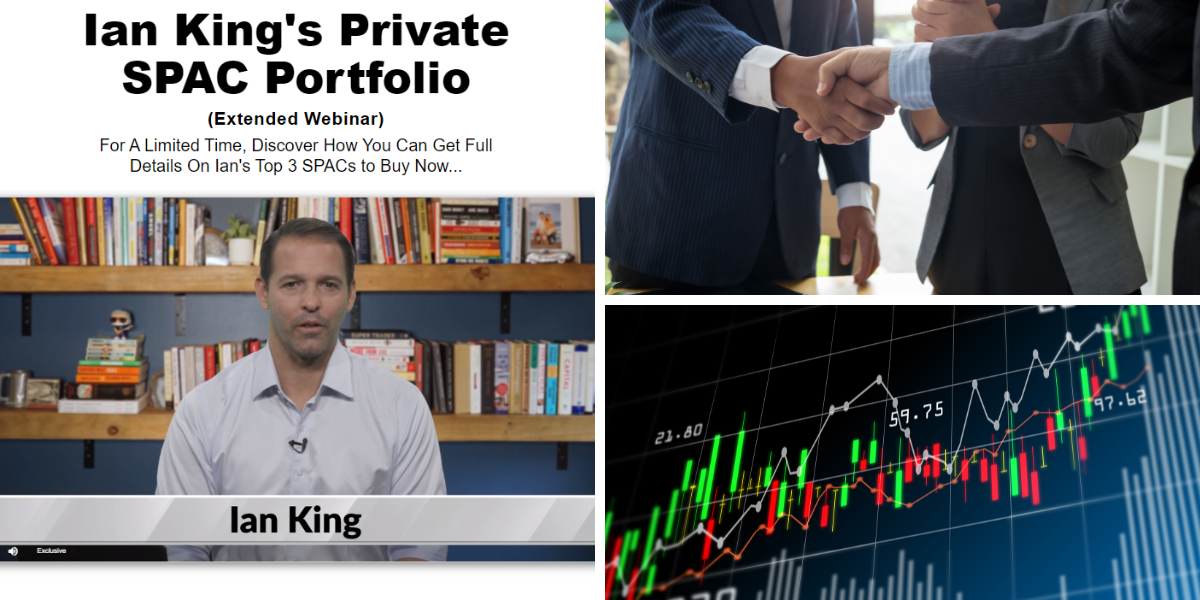 You’ve likely heard about the “new” type of investment vehicle known as a Special Purpose Acquisition Company or SPAC for short. Hundreds of the fastest growing private companies in the world have been completely sidestepping traditional IPOs in favor of SPAC deals.

But with hundreds of companies worth more than $1 trillion dollars waiting to go public in this fashion, finding the most lucrative ones is imperative. This is what Ian King is here to do by sharing his “Top 3 SPACs to Buy Now”.

The number of traditional IPOs has declined since 2016, while the number of SPAC IPOs has skyrocketed by more than 2,000% since 2015.

SPACs have also been churning out some of the market’s biggest winners prior to this year.

This is something Ian King is familiar with as a former hedge fund manager with over two decades of experience trading and analyzing the financial markets. He started at Banyan Hill Publishing in 2017 and now edits four separate newsletters for them: Strategic Fortunes, New Era Fortunes, Next Wave Crypto Fortunes, and Profit Point Alert. Greenbull has reviewed some of his work for these in the past, including the more recent “Next Gen Coin” and “Infinergy” Solar Company.

As an example of some standout SPACs,  in 2019 California-based precision medicine company DermTech went public through a SPAC and gained 1,500% in 18 months. In 2020 mobile gaming and esports provider Skillz jumped 318% in just three months.

Although the market for SPACs has slowed down since the first half of 2021, there is still money to be made investing in SPACs. One might argue even more money, since some quality private companies coming to market this way are now being completely overlooked.

Ian states this is why he put this extended webinar together. To make sure readers know the benefits and the potential pitfalls associated with SPAC deals. What’s more, he’s going to give us the chance to see his private SPAC portfolio, which includes 3 stocks that have what it takes to become big winners.

This “chance” starts by getting a brand-new special report called: Ian King’s Top 3 SPACs to Buy Now. Which details some of the SPACs with the best chance to deliver massive gains.

This is a free report that is included when purchase a subscription to the New Era Fortunes newsletter. You’ll get access to an entire SPAC Portfolio, as many as 24 more stock recommendations in the next year, and two brand-new trade alerts every single month. All this for the not-so low price of $1,995 per year.

A Tale of Two IPOs

Private companies offering stock to the public is nothing new. Its just that the original way of doing so via an Initial Public Offering (IPO) did retail investors (who make up the majority of the market) no favors whatsoever. Here’s what I mean.

Traditional IPOs go a little something like this: A private company goes to an investment bank like Citigroup, Goldman Sachs or Morgan Stanley. The bank’s analysts go to work figuring out the market value of the company and its shares. These analysts are then sent on what’s called a “roadshow”, shopping the company to the bank’s biggest clients to determine their interest in the IPO.

Their ultimate goal is to get more orders than there is stock available. All before the public ever gets a chance to invest. So, while the bank and its favored clients who got in pre-IPO often double their money in just a few short hours once they hit the market. Individual investors who buy shares after the opening bell pay double what the bankers paid.

Thus its easy to see why someone might want to come up with a better IPO. One that cuts out the middle man and levels the playing field for everyone. Enter SPACs.

They allow private companies to go directly to the market, giving everyday investors the opportunity to buy into them at a fair price before they go public. Against this backdrop, its not surprising to see that SPACs have quietly overtaken traditional IPOs as the preferred way to list shares on the market, representing 59% of all new listings in 2021.

Companies like DraftKings (Nasdaq: DKNG), Virgin Galactic (NYSE: SPCE), and ChargePoint (NYSE: CHPT) were all SPAC listings with good-sized pops of 527%, 502%, and 300% respectively in the shares of their acquisition vehicles once the deals were announced.

Once listed, SPACs have two years to make a deal. If you buy a SPAC without a deal lined up, the stock might trade flat until a deal is announced. To help us avoid this, Ian has built a funnel with five filters to see through the clutter and identify the right opportunity at the right time.

This is what he has used to ID three SPACs which are setting themselves apart from all the rest.

The Top 3 SPACs to Buy Now

Ian says that while he can’t go into great detail here about each of these recommendations, what he can tell us is:

That’s pretty much all we get, making it impossible to narrow down the list of potentials.

So instead we’ll take a closer look at SPACs in general and if they are worth the trouble.

Like most investments, a Special Purpose Acquisition Company (SPAC) is not an inherently good or bad investment in and of itself.

It depends largely on the leadership behind the SPAC and of course the underlying economics of the proposed target company being merged into the SPAC itself. With this said, recent data on SPACs has been encouraging.

Even SPACs with an announced deal but no merger as of March 2021, their stocks were up 15%.

The sensible approach here is to purchase a small basket of SPACs to further de-risk. Just like if you were buying a basket of commodities, companies trading below their net asset value or other specialized investment.