Ian King’s “Profit Framing” – What Is It? 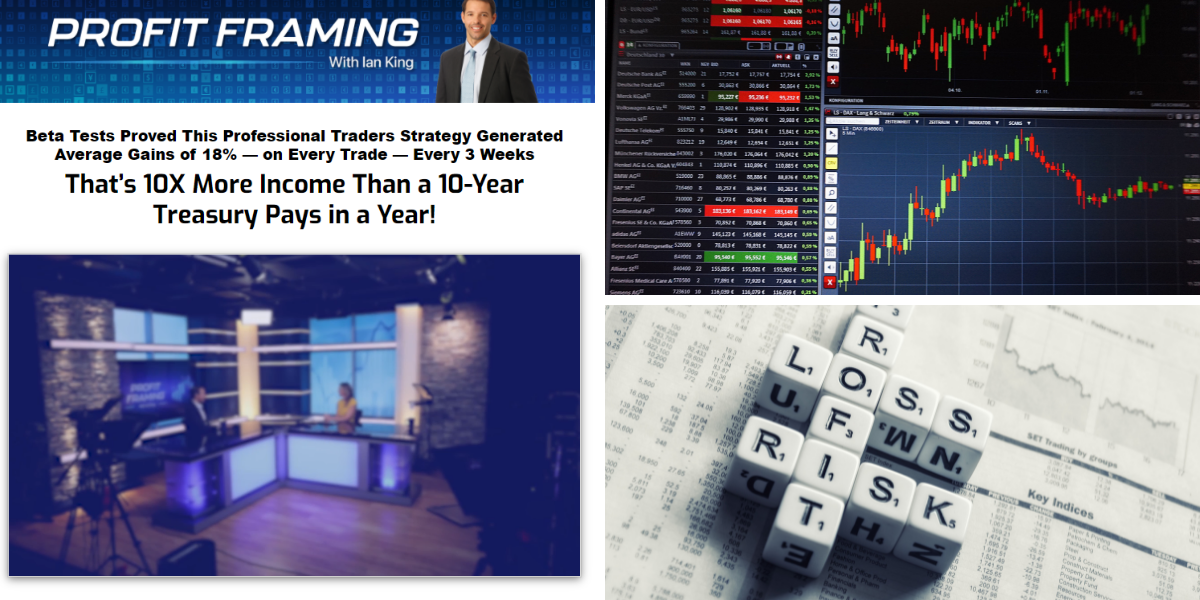 Corrina Sullivan is our host for this Banyan Hill special event which promises to reveal to us “one of the most elite trading strategies ever developed”.

Banyan Hill’s own trading expert, Ian King joins the presentation and some light is shed on how he led his former hedge fund to its best-ever annual gain of 261%, during the crash of 2008 no less. What most don’t realize is that Ian was able to make those spectacular gains, during one of the worst markets ever because he learned and mastered, each of the elements that go into making this strategy so effective. Ian King is a former hedge fund manager with over two decades of experience trading and analyzing the financial markets. King initially started in the mortgage bond trading department at Salomon Brothers. He then spent time honing his skills in trading at Citigroup before spending a decade at New York-based hedge fund Peahi Capital. He has been with Banyan Hill Publishing since 2017. We have covered some systems-based trading strategies here in the past, including the Flow Matrix Alert Review and Matt Milner’s “Pre-IPO Cheat Codes”, among others.

So what makes this strategy so prized? Ian tells us its because it lets investors create trades “with limited risk and a high probability of success”. This is very broad and doesn’t tell us much, but what will is that for the past six months Ian’s been conducting a series of precise market “back tests”. To prove, again and again, that his strategy is the ideal way to trade today’s market.

To his credit, Ian wanted to do this, to prove these “Profit Frames” work and work well before sharing these trades with others. As it turns out, Ian’s back test had a 78% success rate, with seven out of nine trades ending up winners. This is impressive and a closer look shows that the back test closed out a winning trade, every 21 days, with the gain – a 126% profit, coming in just 14 days.

Where things get just a bit weird lets say, is the next part where we’re told that makes these trades so exciting and so historically profitable. Is that unlike regular stock trades, Ian’s strategy actually pays you, up front, every time you make a trade. Not only this, but with the Profit Frame strategy, you get to choose how much you could be making on each trade.

The pitch here is for Ian’s brand-new premium trading research service Elite Options Alert, which will be guide subscribers step-by step through every single Profit Frame trade he recommends. The limited time charter member price is $2,997 for one full year – normally a whopping $10,000, which may just set the record for the highest sticker price for a trading research service that we have reviewed.

This includes weekly updates, actionable trade alerts, special trader updates to bring you up to date on anything and everything that could affect our positions, and more.

What in the World is Profit Framing?

Quite simply, Profit Framing is the name Ian assigned to his options strategy. Ian tells us that if we were to look it up online however, the strategy most commonly goes by a different name: Iron Condor.

Apparently, it is so named because the top and bottom of trades form a wing-like pattern and iron condors, have the biggest wings. Ian thinks his terms makes more sense, as it tells you exactly what it does and what it’s supposed to do: You’re framing your profits, as long as the trade stays within that frame, you’ll collect those profits.

How exactly does this strategy produce such profits? One of the things that makes this options strategy more conservative in nature, is that it’s a defined outcome trade. Another way to put it is a defined risk trade. This means you know going in exactly how much you can make, this is capped by the credit for the trade and you know how much you’re risking, this is the amount you have reserved on margin. While it’s possible to lose 100% of that investment in the trade, it’s also possible to MAKE 100% on your trade.

Ian sums up the Profit Framing options trading strategy as “taking advantage of how the market actually functions, not how we wish it would work.” He says the market almost always tells you what it wants you to do — if you know how to read it.

Ian correctly states that 80% of the time, the market goes nowhere. It trades sideways per the 80/20 rule. Here’s an example using the six-month chart for the Diamonds, the Dow Industrials ETF (NYSE: DIA) from March to September 2021. As we can see below, the Dow Jones Industrial Average headed higher in March, from April until September it traded in a consistent sideways pattern. It was range bound. So if we were to make this trade, as long as the Dow stayed within the Profit Frame (range), we’d make money. Sideways patterns like the one just shown are the ideal setup for the Profit Frame trades. Since they happen more often than not and Ian’s been able to display a 78% winning trade record in his test portfolio, Profit Frames sound like a conservative options trading strategy.

10x More Income in a Year Than a 10-Year Treasury Bond?

This headline may ring true, but is the Profit Framing options trading strategy just as good or even better at preserving your principal?

Of course not. But if you did win seven out of every nine of your trades, as the back test showed. That would still very impressive and on par with some of the best traders ever. This doesn’t sound too plausible, considering the proliferation of Artificial Intelligence bots and algorithm-based trading that now exploit just about every conceivable way to scrape pennies out of the market.

Ian also doesn’t go into any details about any upcoming trades or even how to identify potential “Profit Frames”, so we don’t have all the information we need in order to fully evaluate the difficulty of executing his system.

We can say that a conservative options strategy, as Profit Framing positions itself to be, sounds like an oxymoron. The fact that it is a defined outcome trading system does make it less risky, as by definition you can only lose however much money you decide to put up, but it does operate on the Black-Sholes-Merton model, which entails setting up trades over a specific time frame, which in turn increases the risk.

Unless you are already a seasoned investor and want to hedge some of your other portfolio holdings with options, we would look elsewhere for safety of principal and a satisfactory return.

Do you think non-algorithm based trading has any merits left? Or have the machines completely taken over. Let us know your thoughts in the comment section below.