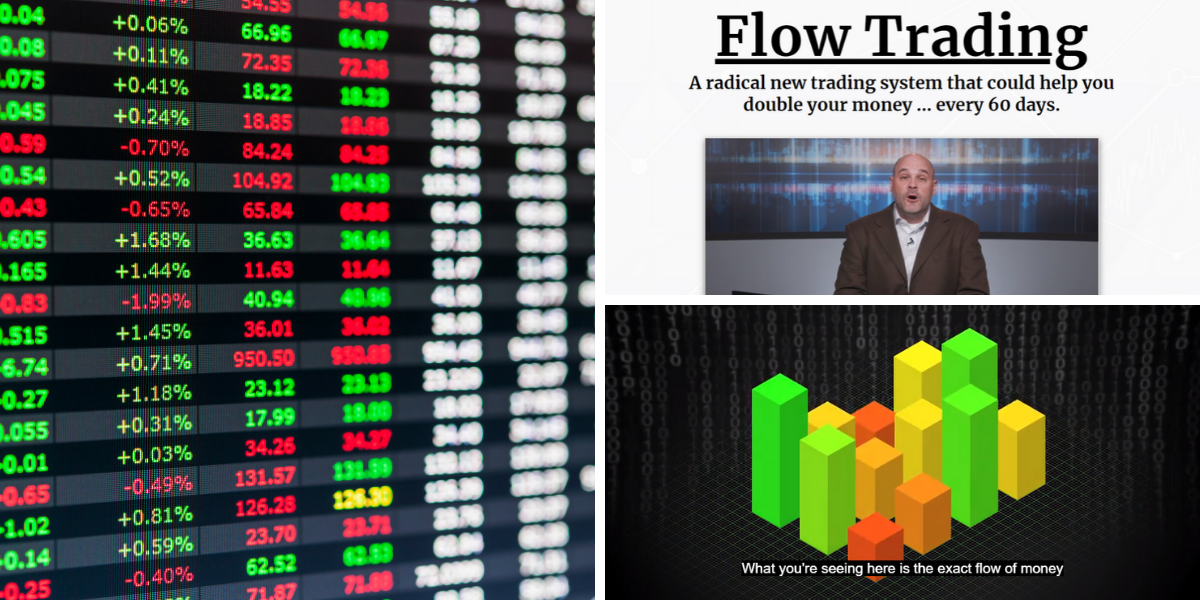 Sounds amazing, but is it legit? Or is this just going to be another over-hyped let-down?

In this review I'll be going over what "flow trading" is and I'll be providing details on his Flow Matrix Alert service, which is what you would have to join if you want to get this "flow trade" recommendations and follow along.

There are probably many promotions for this service, but I came across a teaser titled "Flow Trading: A radical new trading system that could help you double your money... every 60 days"... 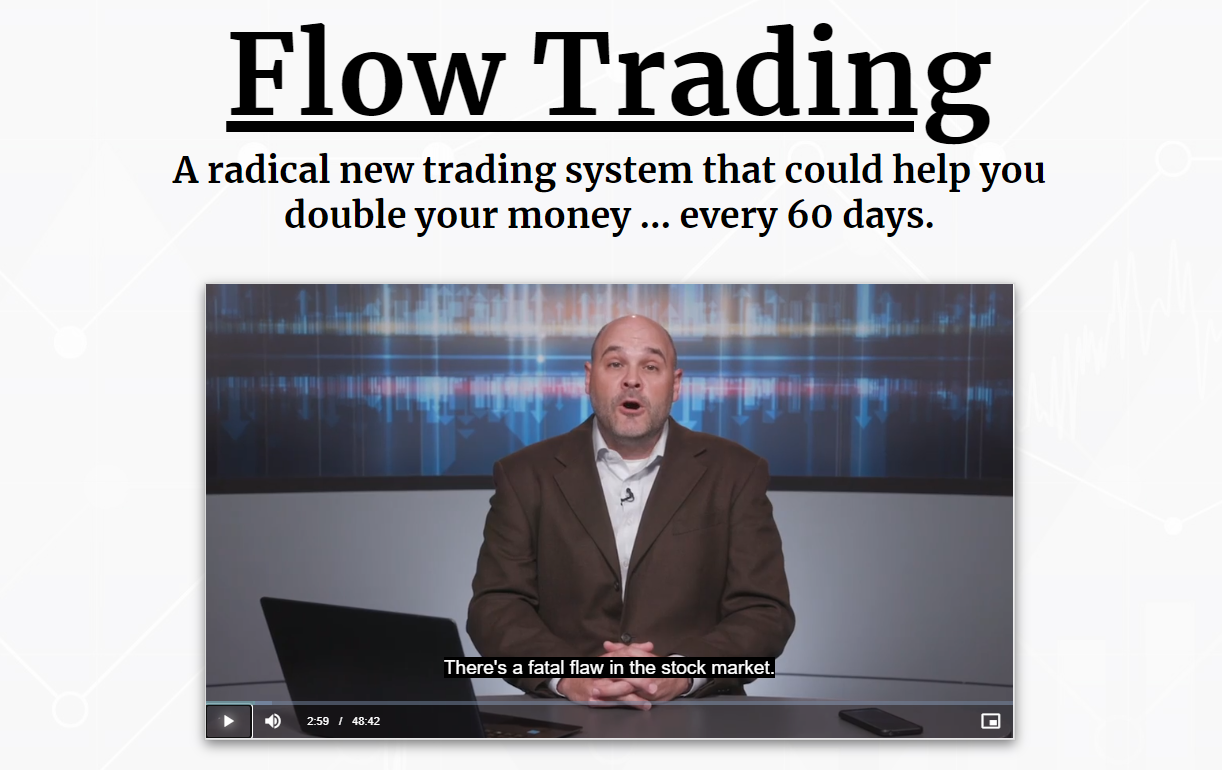 Brian Christopher is the main guy behind it all. He is an editor at the Banyan Hill publishing company where he runs newsletter advisory services, such as the Flow Matrix Alert. Before this he worked in finance for over two decades, working as an expatriate controller for a big Fortune 100 company as well as advising banks as a turnaround consultant. He is both a certified accountant and is certified in financial forensics, and the skillset he gained from this is what he attributes his success in trading to. He knows how to analyze the numbers, and some of his relevant trading experience includes working on the floor of the Chicago Board of Trade add the Chicago Mercantile Exchange.

Brian really hypes up this "flow trading" opportunity. Some of the more bold claims made include:

Throughout the teaser he showed over and over again different charts from massive gains his Flow Matrix Alert has alerted him to, such as the 767% gain from Cloudera here... 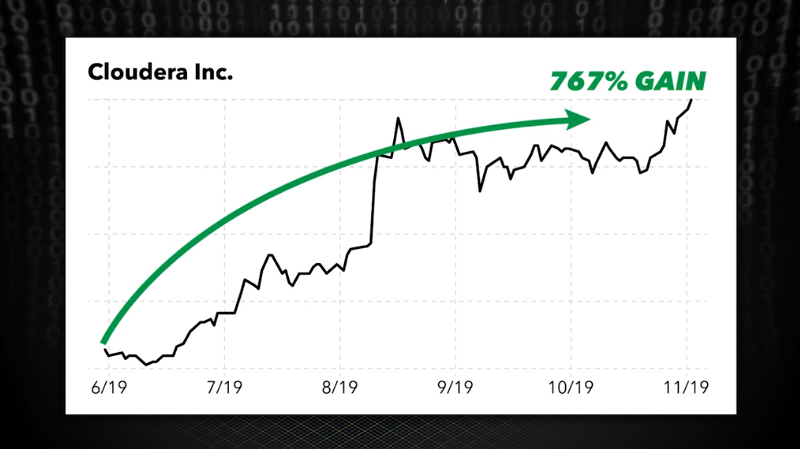 ... but he conveniently leaves out any of the big losing recommendations this system has made.

As always, take what you hear in promotional teasers like this with a big grain of rock salt.

Let's get to the actual review and see what this service is all about, beyond the hype...

Table of Contents
What Is Flow Matrix Alert?
How It Works
What You Get
Track-Record
Cost & Refund Policy
Pros v Cons
Conclusion - Worth Joining?

What Is Flow Matrix Alert?

Flow Matrix Alert is follow-along investment advisory service that alerts subscribers to new trades and provides all the necessary information on making those trades. The service is based around a "flow trading" system to find profitable trades, which I'll provide more details on in a bit... but basically the system helps investors piggyback on the trades that large institutional investors are making.

The system hinges on a proprietary software that Brian Christopher and his team have developed for spotting good trade opportunities, but also relies on good old brain power and manually analyzing opportunities.

It's also important to note that this service is all about options trading, similar to Altucher's Weekly AlphaBrain Alert and Jeff Clark's 3-Stock Retirement Blueprint. But don't worry if you've never trade options before, there are manuals provided that make it newbie-friendly.

The proprietary screening software that Brian and his team developed is said to use the same computer technology that NASA uses to predict global temperatures. Now I'm not sure how true everything he says is, and for all I know he could be blowing smoke here, but what his software supposedly does is tracks big movements of money coming into market sectors from large institutional investors.

The software tracks the big money and puts all of the data into "the flow matrix".

Below is a graphic that was shown representing the flow of money of the S&P 500 and the 11 biggest market sectors ("the flow matrix") - red supposedly tells you where money is flowing out, green represents money flowing in, and the other colors are in between... 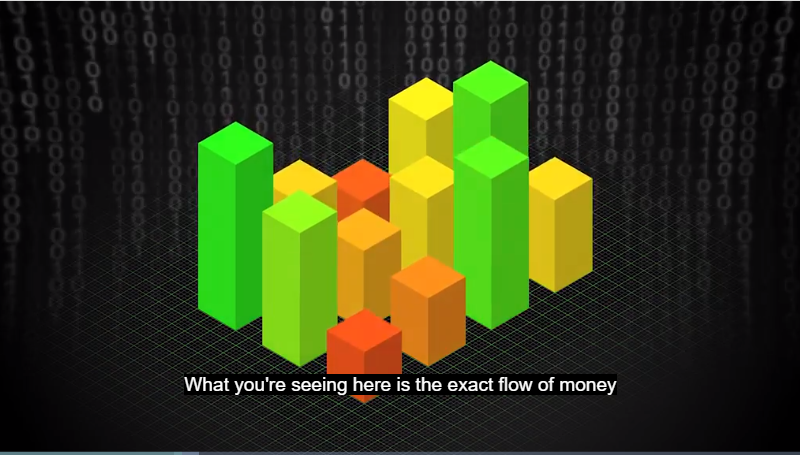 So the system alerts him and his team and then they go in and find the best stocks in the particular sectors that the big money is flowing into.

As far as I know, it just tracks the money flowing in and out of sector ETFs, and does so in real-time.

Brian Christopher calls this "breakthrough trading software" that "let's you peek inside the biggest trades as they're happening"... however, it only tracks the money-flow in and out of entire sectors.

What does this mean?

It means that it only tells them what sectors might be worth looking into, and then the team has to actually go in and find specific investments they think are worth it.

So in a nutshell, this software really doesn't seem to do all that much.

The Stock Market "Flaw" That This Exploits

In the promotional material Brian Christopher was also talking about some flaw in the stock market, so I want to clear a few things up here.

He talks about how most stock market gains come from just 25% of stocks and how most trading systems try to guess which stocks will go up However, his flow trading system disregards the 75% of stocks that haven't done much and looks at the 25% that have already been going up.

So, where's the "flaw"? This is true, but certainly not a flaw by any means and is normal. Of course not all stocks are going to be going up all the time - just wanted to make this point.

Summary of How It Works: In a perfect scenario the system would alert the team when big money starts flowing into a sector, they would find good stocks in that sector and would ride out the wave of money coming in by trading the underlying options to those stocks... easier said than done of course.

The Flow Matrix Alert is a follow-along service. What I mean by this is that subscribers can join and simply follow along with the trade recommendations that are made, although of course we never advise you to just blindly follow without doing your own due-diligence.

Here's a breakdown of what you get as a subscriber... 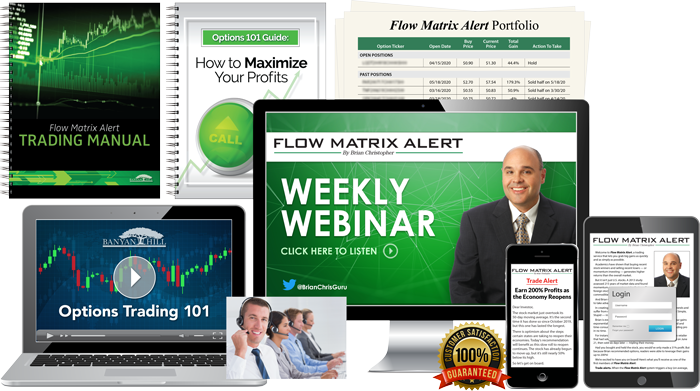 The service is still very new so there is no forward-running track-record to discuss yet.

However, they have supposedly back-tested the system with good results... results that supposedly showed them that this system can double traders' money in 60 days, potentially on every trade.

There really wasn't much detail provided on this back-test however.

It's a steep price, but luckily there is a money-back refund policy in place, which is pretty unusual for higher-priced services like this. 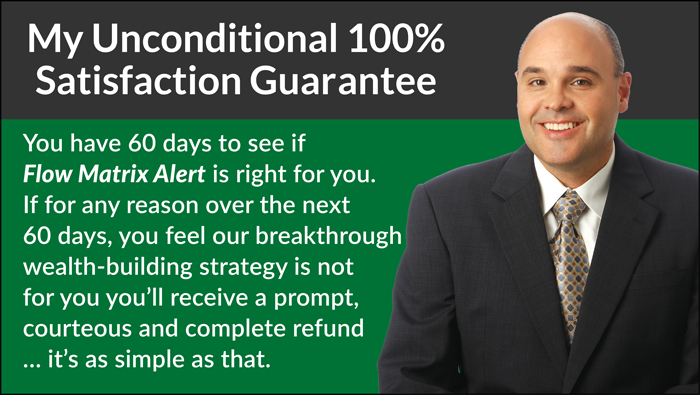 As is stated above, you can get a refund for any reason within 60 days of buying.

So what we know is that Flow Matrix Alert is a follow-along options trading service where Brian Christopher provides subscribers with trade recommendations that are halfway provided by his proprietary software, which identifies money flowing into sectors of the market.

Is it worth joining Well, this is a question you'll have to answer for yourself. And it's a difficult one since there is not any long-term track-record with this. Not only that, but it seems like people over at Banyan Hill and other big financial publishers are always coming out with fancy new trading systems that run on some new "proprietary software" all the time.

This service does provide a lot. Not only do subscribers get recommendations on a regular basis, but they also are provided with market updates and guides to get started. That said, you'll have to decide if it's worth the price tag.

Also: You should be aware that there is a common complaint with options recommendation service like this, which is that it can be very difficult to get into trades at the right prices, much more difficult than if they were regular stock recommendations. What this means is that you can't expect the same results as Brian Christopher, since of course he is getting into all the trades before alerting all subscribers.

Anyhow, hopefully this review has helped clear some things up. Be sure to let us know what you think and leave any comments/questions below. We like to hear back from our readers!