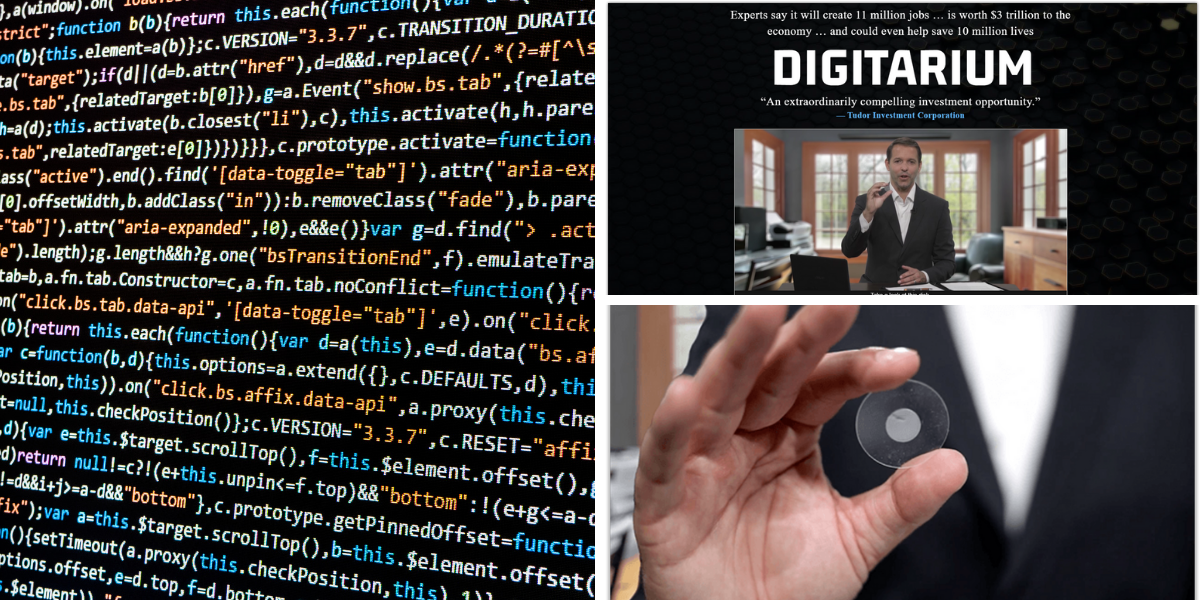 Wondering what Ian King's "Digitarium" stock is? Well, then you're in the right place.

Recently I received an email about the opportunity to invest in this new technology, which King claims is "poised to become the biggest investment opportunity of the century"... 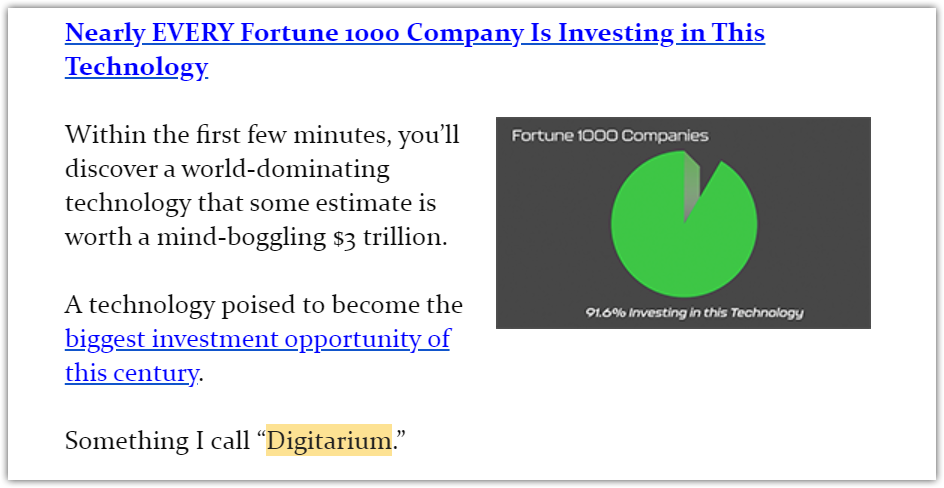 Of course by now I know better than to fall for the hype with these kinds of emails, but I was interested and decided to look into this one further.

In this article I'm exposing the stock being teased for free. But first let's go over the teaser and piece the clues together that we are given. 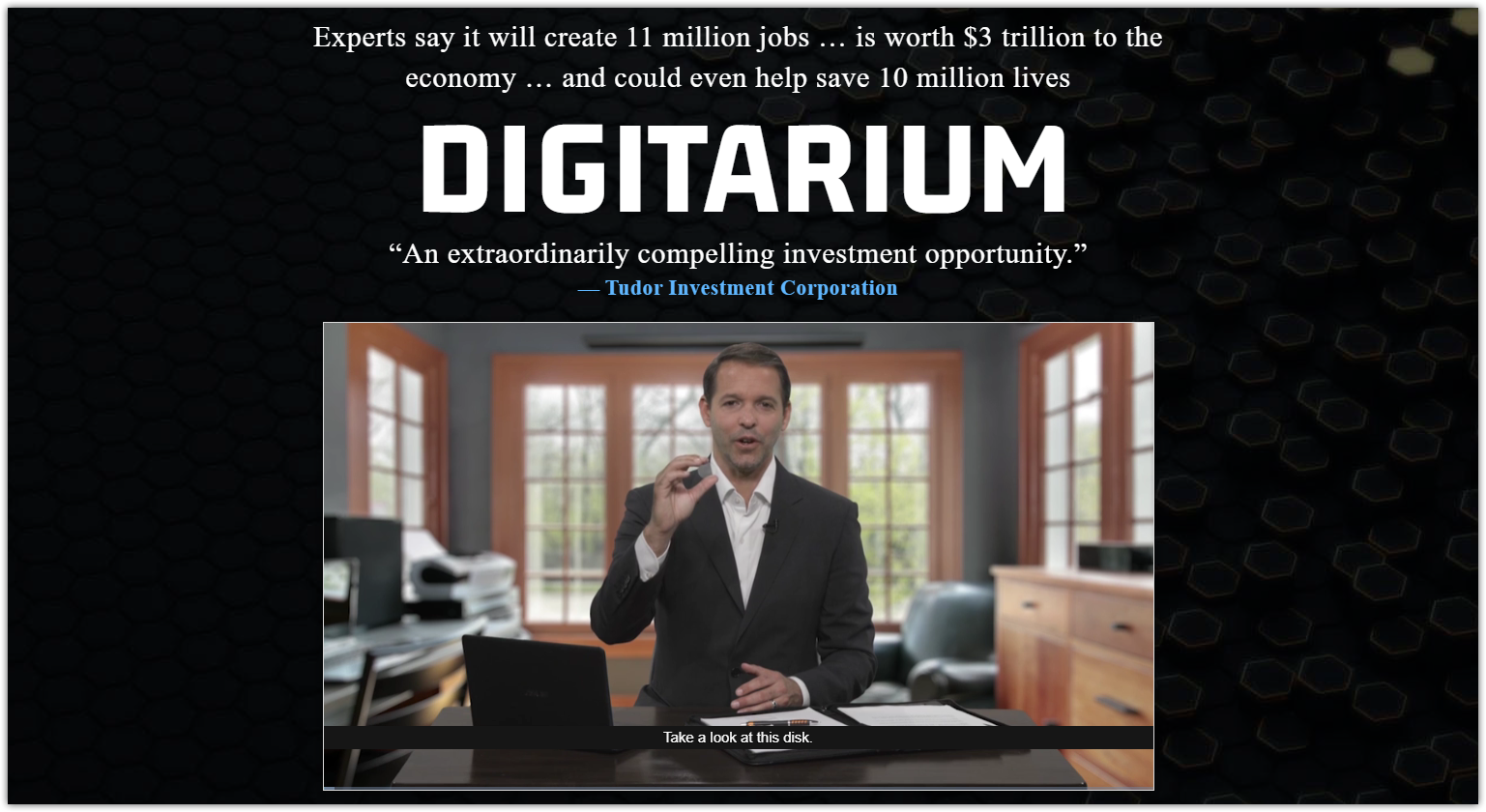 As we know, Ian King is the man behind this presentation. He currently works for Banyan Hill Publishing where he runs a handful of investment advisory newsletter services. But, before all of this, King was working on Wall Street, starting out at Salomon Brothers at the age of 21 and working his way up to eventually managing a hedge fund at Peahi Capital later on. He has an impressive background, has been featured on media outlets like Fox Business News, Yahoo Finance and others because of it, and is often teasing new Tech stocks (often FinTech stocks) to invest in... like his MaaS and Imperium stocks for example.

He knows a thing or two, but you still have to take what he says with a giant grain of rock salt.

In this teaser for "Digitarium", King starts out holding up a small disk and talking about how there is a "company that dominates the technology inside it"... which he claims could control the global economy. 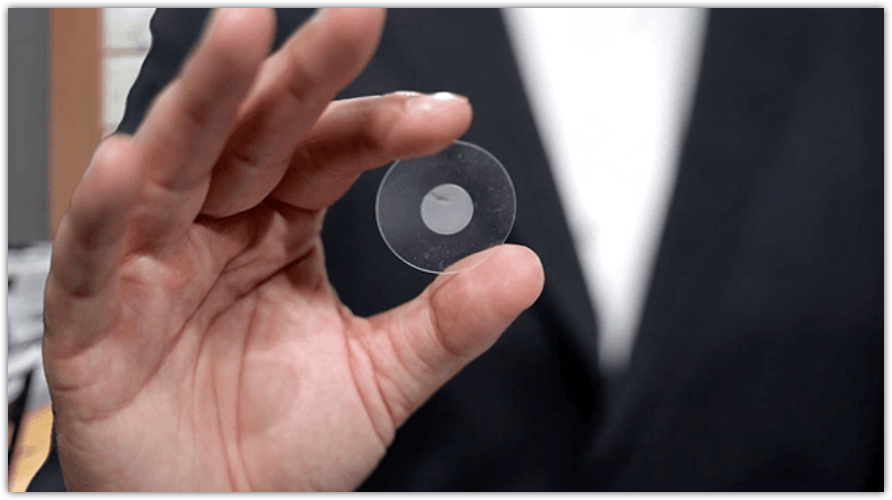 We are told that large companies are already or are planning on spending loads of money investing in this new tech.

"Apple will spend $10 billion over the next five years.

And Microsoft has already spent $15 billion, and is just getting started."

King tells us that 91.6% of Fortune 1000 companies are investing in it, including Warren Buffet's Berkshire Hathaway... which we're told has been "greenlighted" to spend $1.5 billion.

Even the US government is spending "nearly $100 billion to acquire more of it"... so we're told. 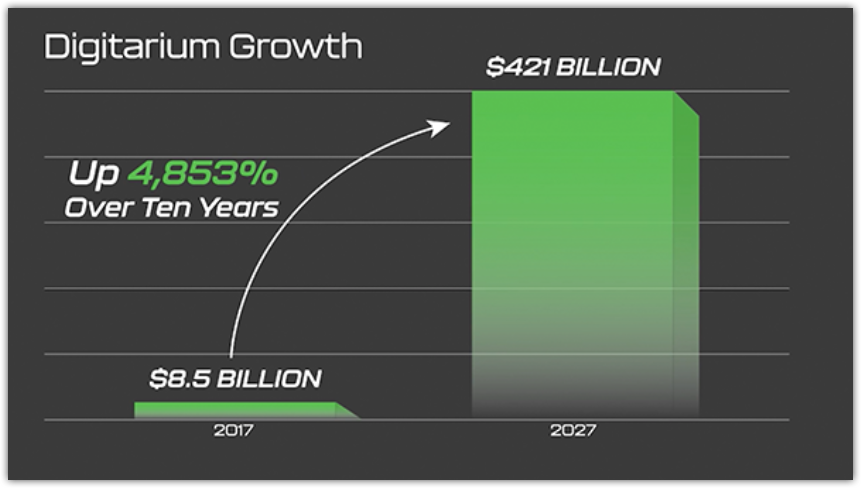 And I guess in the even more distant future it's expected to experience quite a bit more growth because King tells us that it's an opportunity to tap a future $3 trillion market... but I don't know where exactly he gets this number from.

It's a big deal and, as always, Mr. King has found the perfect company to get in on this trend.

This is a company that we're told has "a huge advantage over the competition"... and King expects it to make investors rich.

In fact, he's even going as far as to call this company "the next Google". On the conservative side, even if you had invested your money in Google just back in 2007 you would have about tripled it.

The next Google? Well, I guess we'll have to wait and see. But this is the stock I'll be exposing for free in just a minute.

Normally you'd have to buy into Ian King's service to find out more.

All the details on this Digitarium company are provided in his special report titled The Next Google: The Tiny Company Powering the 5,000% Big Data Mega Trend... 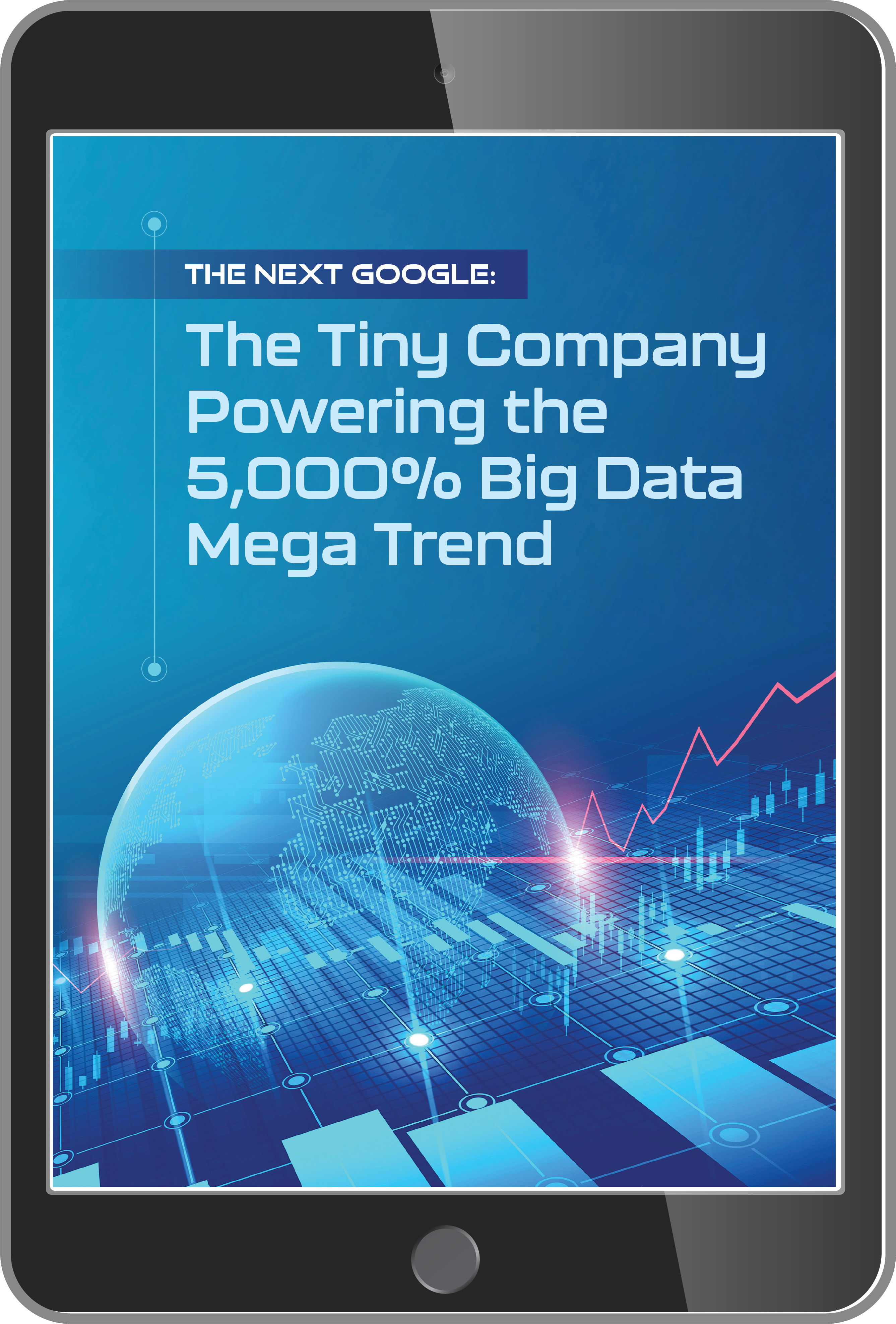 This is said to be "totally FREE of charge".

However, we know how this usually goes.

It's "free", but first you have to subscribe to his investment advisory service called Strategic Fortunes to get it for "free"... and this costs money.

A subscription to this will provide you with monthly analyses targeting new investments, weekly video updates, access to the model portfolio of recommended open positions, real-time trade alerts, and access to the members area where you can find an archive of all the past reports, updates, etc.

This is normally $199/yr, but through the sales funnel I found myself in it was discounted to just $47 for the first year.

What the Heck Is "Digitarium"?

Some more from the presentation:

King tells us it "will be more disruptive than 5G, blockchain and artificial intelligence (AI), combined".

How, well, because it supposedly "will be the key to unlocking these technologies' full potentials".

Here's what we're looking at... some of Google's warehouses... 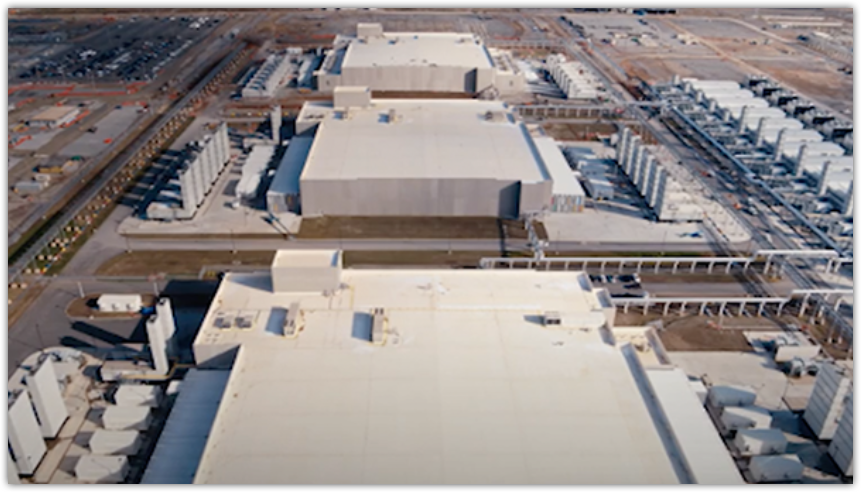 And we're also shown aerial photos of two Amazon warehouses that are said to be "unmarked massive buildings with military-like perimeters"... 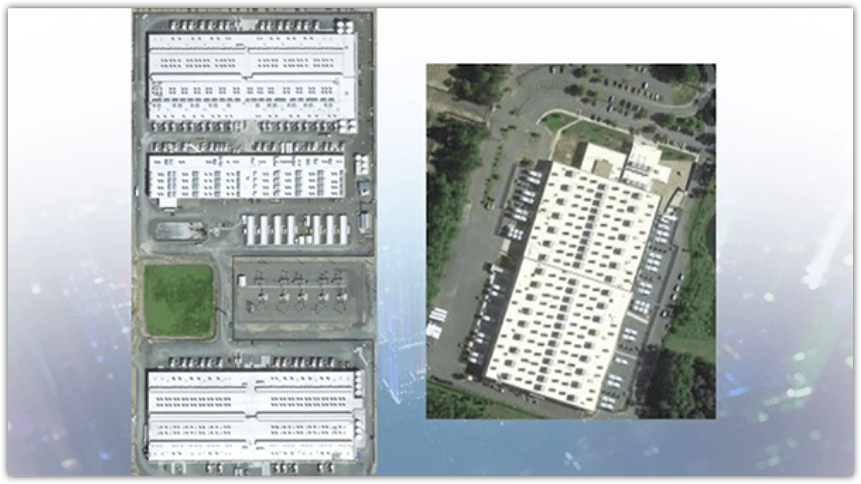 So what the heck is this digitarium stuff that seems to be more precious than gold?

Well, if you were able to make it through half of the ridiculously long teaser pitch then you'd already know.

They collect Big Data themselves when you use their services/products (as well as purchasing it from other sources) and use that data for marketing purposes.

Storage capability of data has come a long way.

"You see, it used to take six floppy disks to store just one copy of the Bible.

But now, you could store nearly 48 million copies on this tiny crystal disk."

However, this is just one part of the equation. Storing data alone isn't helpful, and most companies store data that goes to waste because they don't know what to do with it.

I've seen estimates ranging quite a bit, but according to an article by tdwi that I found, more than 80% of data collected isn't used for anything.

Collecting data is the easy part. Refining and structuring it so that it makes sense and can be used is the hard part.

This is where Ian King's recommended company comes into play.

So, without further ado, let's expose this "digitarium" company, aka his "No. 1 data refining company", aka "the next Google".

Here are some of the better clues we are given...

Any guesses?
.
.
.
This is none other than Splunk (SPLK), which old-time readers should be familiar with because this same company was teased a while ago in King's "Master Technology" teaser presentation. 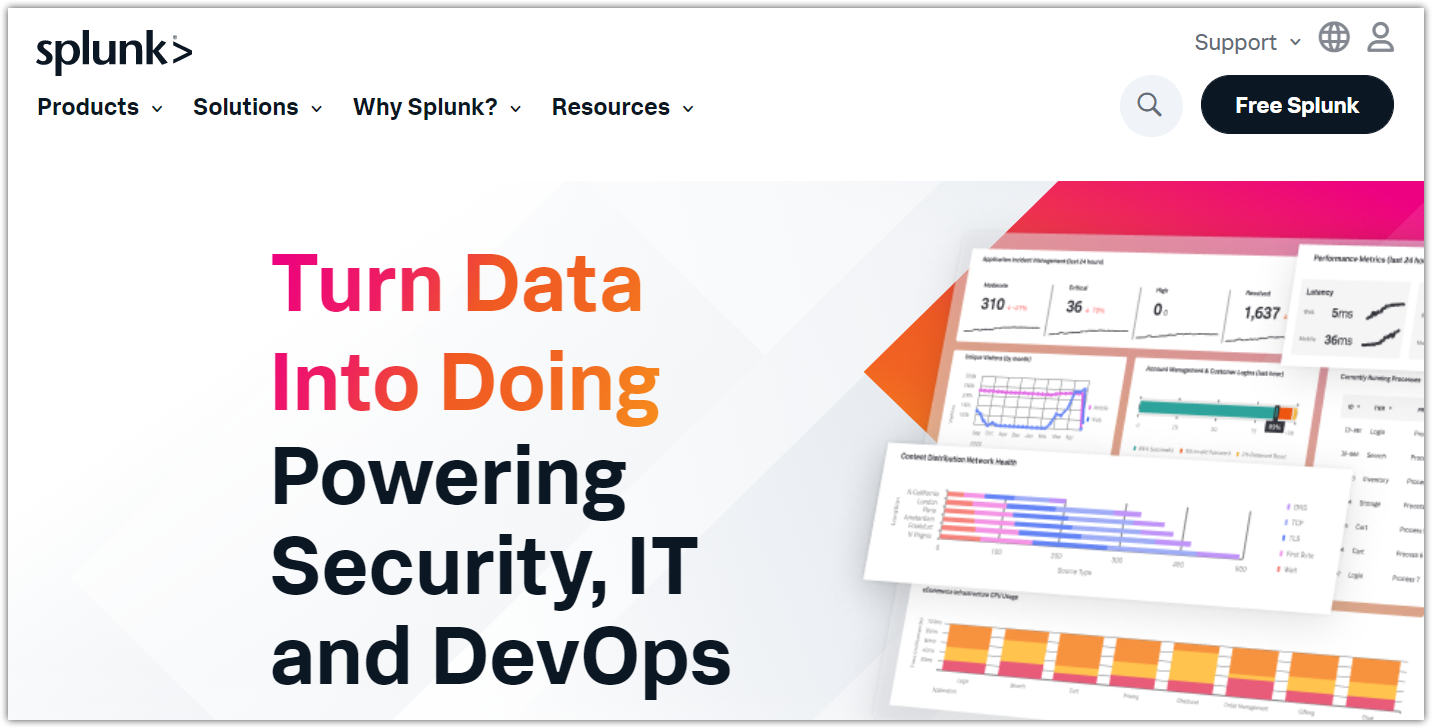 Splunk is a US tech company that has software and a web-interface for analyzing machine-generated data, searching and monitoring. The company's products mostly cater to enterprise-level organizations, as their services are very expensive and rich in features.

Not only does Splunk match up on a basic level, but here are some matches of the clues given.

Splunk it is. But is it a good investment?

The stock is still currently trading below pre-COVID pandemic price levels. Although it has popped back up in recent months, perhaps largly due to the Silver Lake tech investment firm putting a whopping $1 billion into the company recently (with its enterprise value still being just ~$25 billion).

Not only that, but, although not profitable as of yet, the company's balance sheet has been strengthening as its cash and equivalents almost doubled in amount. And their partnerships (Amazon, Slack, Google, Fortinet, etc.) are strong.

But, like I said, it's still not a profitable company as it continues to sink money into its platform for future growth.

Is the future bright for the company?

Well, there's no doubt that Big Data is a BIG business, but what about all those other "experts" talking about how blockchain tech is going to take Big Data back from the Tech giants like Google, Facebook, etc...?

I suppose this depends on what your outlook is.

I hope you've enjoyed this exposé and found it of value to you.

As always, let us know what you think about this stock pick in the comment section below. Is it a buy? Should you follow Ian King's advice?