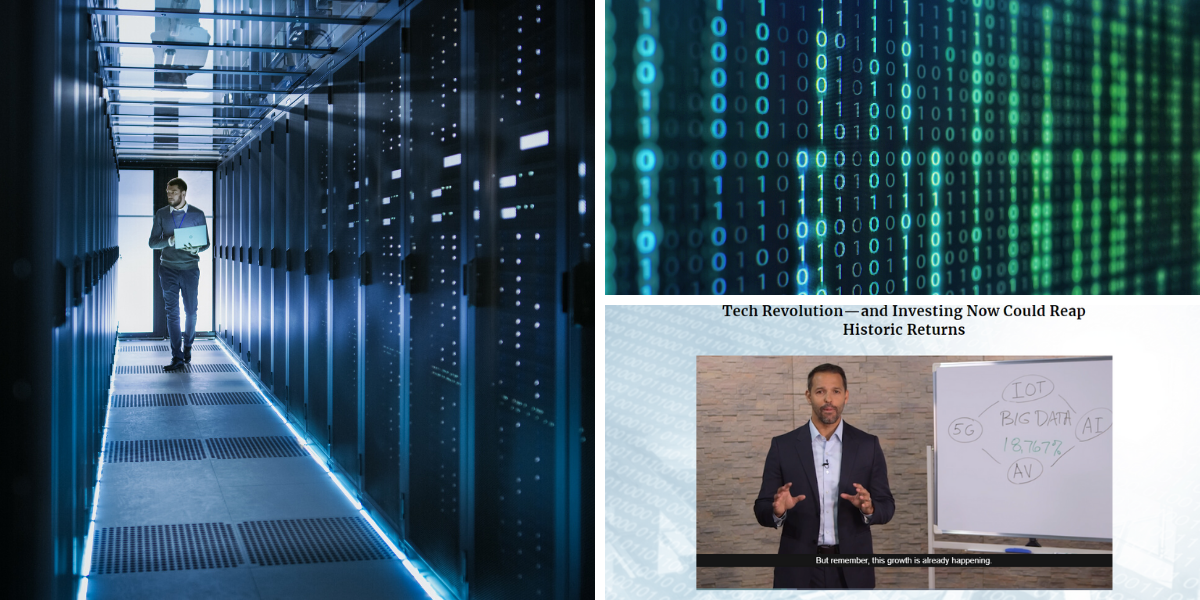 Ian King has been teasing his "Master Technology" Big Data stock for a while now, which he thinks could take the lion's share of an industry that could "explode more than six-fold in next few years".

If you're wondering what the stock is that he's teasing then you're in the right place. In this review I'll be exposing what Ian King's Big Data stock is and providing some information on its potential growth.

There might be multiple teasers floating around the internet for this, but what I came across was titled "This “Master Technology” is Behind Every Other Tech Revolution". In the past this was also teased as "The Most Important Tech Stock of 2020"... *The old teaser was titled "The Most Important Tech Stock of 2019"... so he's been teasing this same stock for quite a while now.

Ian King is the man behind it all. He has worked for the Banyan Hill publishing company since 2017 and it is through this company that he runs his various investment newsletter advisory services - always promoting them with hyped-up teasers, such as his "Spectrum" teaser that we recently exposed. Before all of this he worked in the financial realm analyzing financial markets and trading, and even managed a hedge fund for a while.

In the presentation is all about investing in a "master technology" opportunity, which is really called "data refining". Data refining is what King says is "expected to explode 18,767%" (stated in past teasers).

With his strategy of investing he looks for investment opportunities that are about to explode in price, and this industry is one of them he claims.

In the presentation I watched he showed what he calls the "automatic fortunes curve", which looks like this... 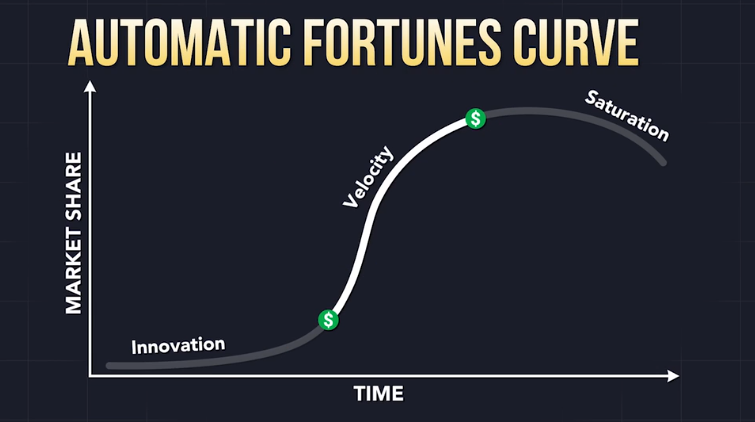 He claims that this opportunity is entering the velocity phase, which is the phase where the biggest gains are made.

Of course he makes everything sound like you're going to strike it rich... and will be cruising on your private yacht around this time next year... and he even shows a bunch of examples of stock growth during this "velocity" phase, such as that for Amazon, Tesla, and Google... hinting that what he is teasing could follow the same path... 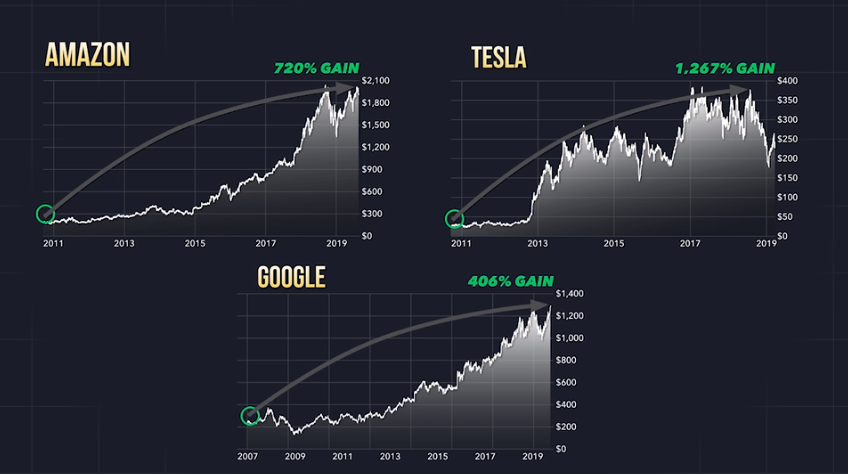 Does this mean that you can expect this type of growth with what he's teasing here?

There is one company in particular that is involved in data-refining and that Ian King thinks will make investors rich, with him saying that:

He even goes as far as to say that "it could grow more the next year than Amazon, Facebook, or Google have grown in the last 10 years".

Well, let's think about this a second. He doesn't tell us exactly what he's referring to here when he says "grow", but if we look at stock prices for these companies, here's what we get: Over the past 10 years Amazon has grown about 19X, Google's stock has increased by about 5X, and Facebook didn't go public until 2012, but if you would have bought around that time then you'd be looking at around a 9X gain.

Amazon has the biggest increase over the past 10 years, and he thinks that this company he is teasing will grow more in just 1 year!

And of course you have to act fast! Oh no!

Now normally you'd have to get a copy of Ian King's "free" report (The Company Leading the Big Data Money Boom) to get more details on this company, but I'll be exposing it in just a bit so that you don't have to. 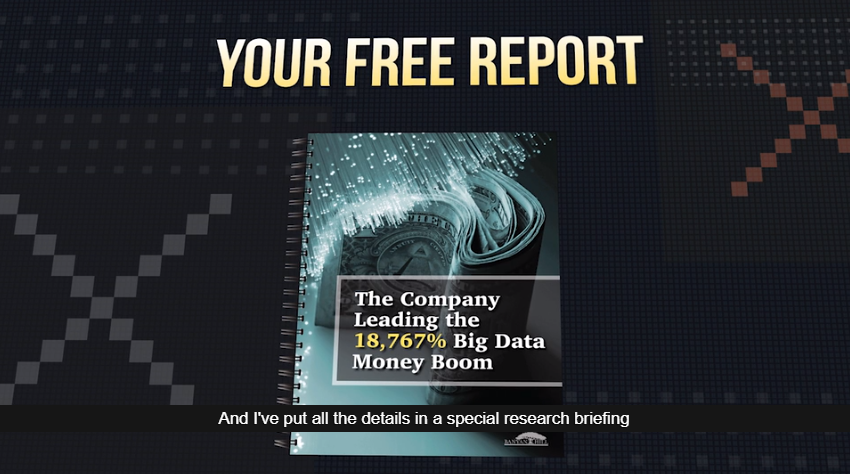 This report is completely "free", but first you have to buy into the advisory subscription service he's pushing... so in other words it's not actually free.

Automatic Fortunes is what he's trying to get people to buy into. This is a follow-along style investment advisory service that, in a nutshell, tells subscribers what to invest in and when. The cost is $79 for a year of the premium subscription.

Unused Big Data Is a Problem

It's true that Big Data has been referred to as the new crude. It's value is being realized more and more, and companies are continuing to collect more and more of it... but the problem is that making sense of all this data isn't quite so easy.

Why so much unused data?

Well, there could be many reasons for it, but often times companies just don't know what to do with it all. It's unstructured, doesn't fit in well with their database, and is just too hard to make sense of.

This is where "data-refining" comes into play and the company being teased by Ian King.

With all the new technology emerging, like IOT, AI, etc., there are going to be large increases in data being collected, and this should have a direct impact on the rise of data-refining.

So, yes data-refining is likely going to be a bigger and bigger deal... and Ian King claims there is one company at the center of it all. He claims that this one "little known" company has a "near monopoly" on the industry and is set to reap most of the expected growth in the industry... which let me remind you King tells us "could explode more than six-fold in next few years".

So, what is the stock that Ian King claims is "right at the center of it all"?

Well, let's take a look at some of the clues he gives us. What we know is this:

So, what's the company?

... it's Splunk (SPLK). This is a company that creates software for monitoring and analyzing machine-generated big data, or what it calls a "Data-to-Everything Platform".

All of the clues match up well here.

So we know the name, Splunk, and the ticker symbol, SPLK, but is it really the incredible buy Ian King tells us it is?

Well, Splunk is positioned well in the industry. They are one of the leaders in the market, and according to Garter it's ranked number 1 in market share for Performance Analysis in the AIOps and ITIM (from a 2019 analysis). And, this is with big annual losses, which come from the hefty spending the company places on R&D.

Their products/services have widespread applications, are easily scalable, and let's not forget that most people predict this field of data-refining to grow exponentially, as Ian King also does.

A well-positioned company in a field that's expected to see large amounts of growth... it sounds pretty good. That said, analysts at CNN Business's 12-month price forecast isn't all that pretty... but then again, these analysts never allow room for big speculation.

However, is this field really going to grow as Ian King speculates? Will it grow as expected?

The famous George Gilder is predicting that bid data, as we know it, will collapse due to the rise of blockchain technology. He calls this the "internet reboot", and has some pretty strong arguments as to why this will happen. HOWEVER, even if this does happen the need for data-refining will still exist. Data will still be here and will still need to be refined, just the way it is stored and handled will be different.

Data use and the need for data-refining will likely grow, as it should and as just about every expects... but only time will tell how it all plays out.

I hope this review has provided some value to you. Be sure let us know what you think of this pick in the comment section below. We like to hear back from our readers here at Green Bull Research!