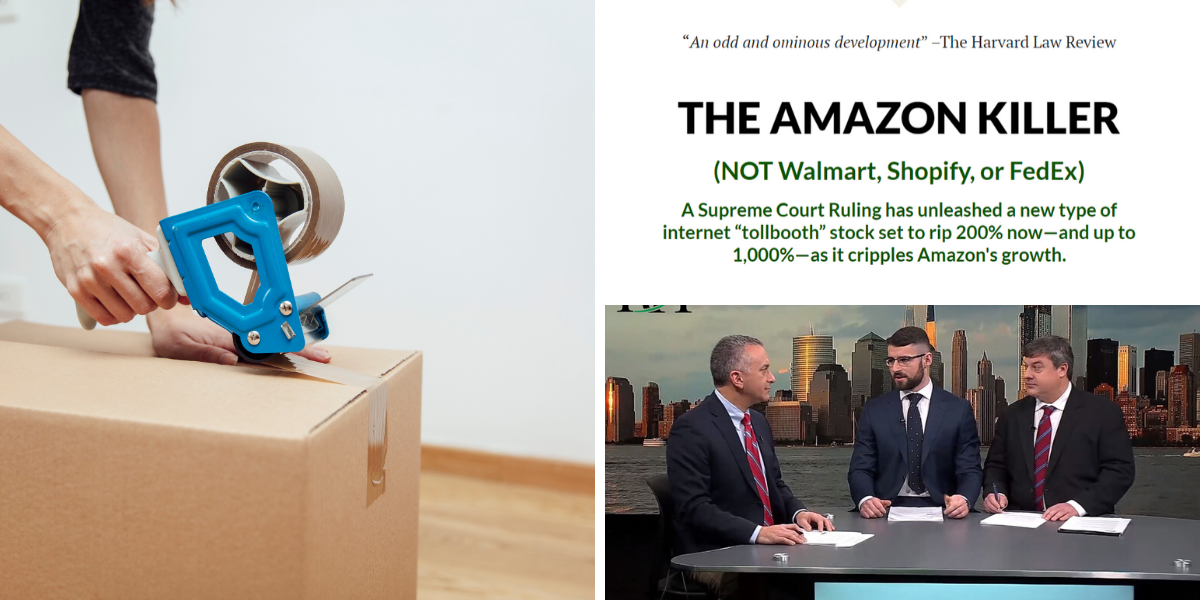 Stephen McBride over at RiskHedge has been teasing what he calls the "Amazon Killer" tollbooth stock. He claims this stock could provide investors with gains of up to 1,000% or more, and is confident it will soar in price even if it doesn't hit quite that high.

If you're wondering if this opportunity is legit and what the heck this "tollbooth" stock is, then you're in the right place.

In this short review I'll be going over what's going on here and exposing the elusive stock for good.

We have the Motley Fool's "Next Amazon.com" stock and now "THE AMAZON KILLER"... and what a catchy title. It certainly got my attention, but don't expect this stock to actually kill Amazon.

As usual, you can't fall for the hype in these teasers.

Stephen McBride is the guy behind the presentation. He works for the financial publishing company RiskHedge where he runs newsletter advisory services uncovering disruptor stocks that have big potential. His background is pretty solid, and inlcudes things like working as a professional fund manager at a billion-dollar institution in New Zealand. I'm not as familiar with Stephen McBride as I am with most of the financial experts out there running investment teasers, but he seems legit. That said, he's also a true hype-man... and you have to take what he says with a giant grain of rock salt.

This "Amazon Killer" tollbooth stock is also referred to as "Amazon's kryptonite", and he claims that it is "the only stock I own in my daughter's college fund"...

The ONLY stock in his daughters college fund? Well then... this must be something special indeed.

Some of the other hyped-up claims include:

And of course... this stock is "still under the radar".

Lot's of hype... and according to the McBride, "this threat even keeps Amazon CEO Jeff Bezos up at night".

Wow... as company that is keeping the richest man in the world up at night? This has to be one heck of an opportunity.

The reason McBride has so much faith in this one company is because he claims it has "special government partnerships"... and we also know that it has something to do with a Supreme Court ruling that enforces a new 6.5% tax on internet transactions.

The teaser then goes on to show a bunch of stocks in the ecommerce industry that saw huge gains as they disrupted the space... hinting that this stock will be the next to do so.

And, as usual, it all ended in a sales pitch.

McBride provides all the details on his "Amazon Killer" stock in a "free special report" he's giving out.

This report is called Amazon's Kryptonite: Collect up to 1,000% Profits on the Internet's New Tollbooth... 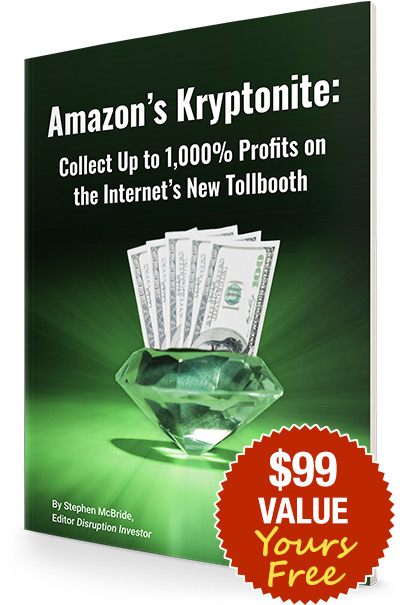 However, and you probably already know this, the report isn't actually free. In order to get it you will first have to subscribe to his newsletter advisory service called Disruption Investor, which is focused on finding disruptor stocks. This costs the "special" price of $179 for two years.

Is it really free? You be the judge.

What You Need to Know About This "TollBooth" Opportunity

For years Amazon hasn't had to pay taxes, which if you think about... is pretty unfair. However, it's been completely legal and any smart business owner would have followed suit.

It was mentioned in the teaser that Amazon has been exploiting a tax loophole refered to as "Quill". What's being talked about here is the 1992 Supreme Court ruling of Quill Corp. v. North Dakota, which basically allowed online sellers to sell tax-free to people in other states.

However, and unfortunately for online sellers, this case has since been overturned by South Dakata v. Wayfair, a 2018 case, that says States can start collecting taxes on online transactions made from people out-of-state.

Obviously this is quite a big deal. Ecommece sales are already nearly $500 billion/yr in the US, and are expected to hit around $600 billion by 2023, according to Statisa.

That's a lot of tax revenue.

But the opportunity being teased here lies in a company that the governement supposedly granted this "tollbooth" status to.

As was mentioned, the government hired this company to run the tax system and make sure online retailers pay up... and it supposedly has some sort of "tollbooth software" that online transactions have to pass through.

So without further ado... let's expose this stock...

What is the 10x bagger that Stephen McBride is teasing the heck out of?

What is the company behind this "tollbooth" that will supposedly hand you those juicy 1,000% gains and have you hiring private maids and chefs in no-time?

Well, here are some of the better clues we were given:

Any guesses on who it is?

Did you just say Avalara?

Avalara (AVLR) is the "Amazon Killer" tollbooth stock being teased here. The company was founded in 2004 and they have cloud-based tax software that easily integrates with ecommerce platforms, such as Amazon and Shopify, to allow for real-time sales tax calculations and charges.

*Note: The only clue that doesn't match up is the one about the company being "0.6% the size of Amazon". I think he might have meant to state that it's 1/6th the size of Amazon, rather than 0.6%, which would be fairly accurate looking at the current market cap. This has to be just simple mistake because all the other clues match up nicely.

So, we know it's Avalara, but is it really the 10x bagger that McBride teases it to be?

The answer: Don't count on it.

As usual, there is a lot of misleading hype here.

Online retailers are required to collects sales tax and Avalara helps do exactly this. It's also true that Amazon sellers have access to Avalara's sales tax software and that many are using it.

HOWEVER, McBride makes it sound as if there is some sort of official government mandate requiring online sellers to use this software. There is NOT.

The truth is that Avalara has competing companies in this space.

That said, they are at the top, have a good subscription business model, AI software that is arguably the best out there for what they do, and their stock has been doing well recently  - wasn't seeing much prositive price action for a while after going public.

It is overvalued though, but still could be a solid purchase and I'm glad I did the research and found out about it.

As always, due your own due-diligence before making any purchase decisions.

And that's all I have for you today. I hope this review provided some value to you.

As always, let us know what you think about this "tollbooth" stock down below. Is it a 10X'er?