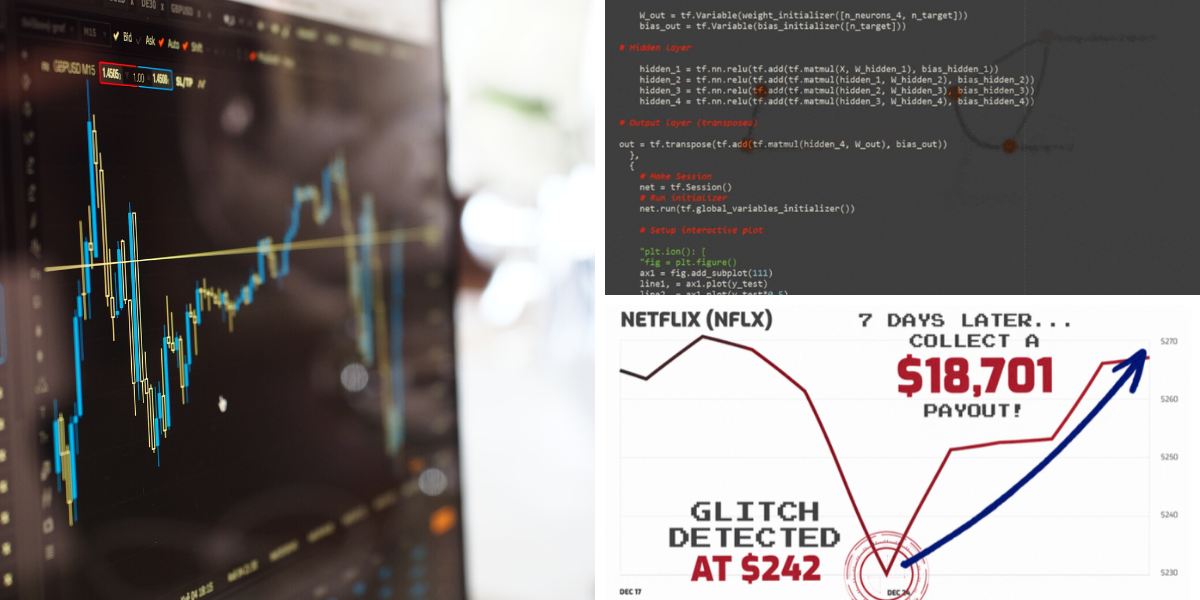 Is James Altucher's Weekly AlphaBrain Alert legit? Is it as good of an advisory service as he claims?

After coming across some claims that Altucher was averaging 715% a week in some of his tests and even 179% a mo during market down-turns, I've decided to look into things further. I've heard a lot of hyped-up claims and I know you can't always trust them 100%.

Anyways, if you're wondering what the Weekly AlphaBrain Alert is and whether or not it's worth the price then you're in the right place. In this review I'll be going over what it is, how it works and what you get as a subscriber, track-record, pros v cons and more. Let's begin...

Overview of the Weekly AlphaBrain Alert

What Is Altucher's Weekly AlphaBrain Alert?

Altucher's Weekly AlphaBrain alert is an investment advisory service run by James Altucher where he provides specific options investment recommendations based on an algorithm he developed.

Like most investment advisory services, this is a follow-along type of deal and there is no experience or knowledge required. Subscribers are told what to invest in and when.

James Altucher is an entrepreneur and angel investor... and he also likes to make it known that he has achieved the official rank of chess master.

James has a bit of a reputation for being somewhat eccentric, but this has proven to suite him well and he's had quite a successful career, having graduated from Cornell University with a bachelor's degree in Computer Science, founded or co-founded over 20 companies, and having traded for large hedge funds.

Just about all of this is relevant here. He has a background in computer science where he has coded trading algorithms in the past, and he has a good amount of experience managing large amounts of money... which means he likely knows what he's doing.

Yes, his promotions can be a bit ridiculous and over-the-top, no-doubt, but he isn't just some random Joe trying to sell his trade advice here.

Is the Weekly Alphabrain Alert legit?

Yes, this service is legit. Most people ask about this because, as just mentioned, there are a lot of really hyped-up promotions that Altucher puts out and they can seem a bit scammy or too good to be true at times.

Can you trust Altucher's recommendations?

I'll be going over the performance of his service in a bit, but as a rule of thumb you should never invest more than you can afford to lose.

There is one fundamental concern with this type of service that I'll be touching on.

Are there refunds available?

Nope, unfortunately not. That said, there is a guarantee in place. I'd rather see a good old-fashion refund policy, but this is better than nothing - more on it in a bit.

This entire advisory service is based around what Altucher calls the "AlphaBrain", which is an algorithm he created to identify what he calls "glitches", that are short-term down-swings in a stock that tend to correct in 7 days or less. He says that he doesn't know the exact reason for them and doesn't really care... the bottom line is that they happen and can be profitable.

Throughout the promotions for this service there are many of these opportunities shown, probably the best examples of course, such as Netflix here... 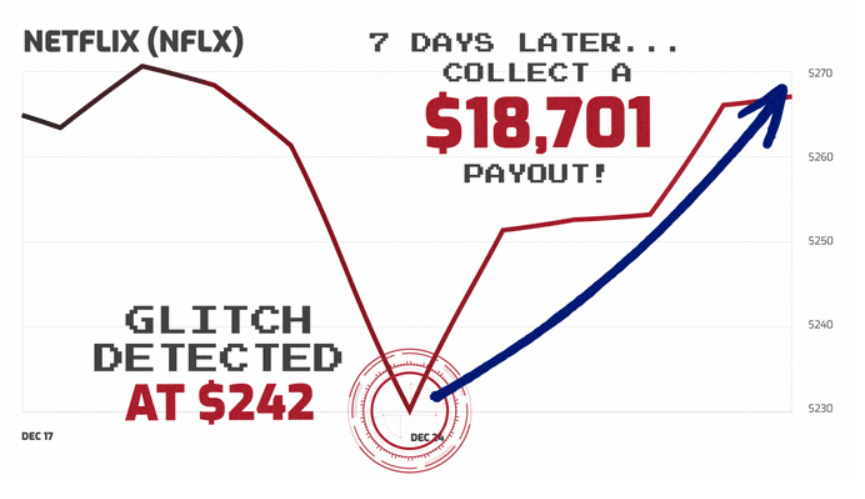 In the one "7-Day Stock Market Glitch" teaser he mentioned that the signals this algorithm uses are the same used to help run deep space satellites... but I'm certainly no expert on this subject and I don't know how true this statement is. He also showed a screenshot of the algorithm running, which is here... 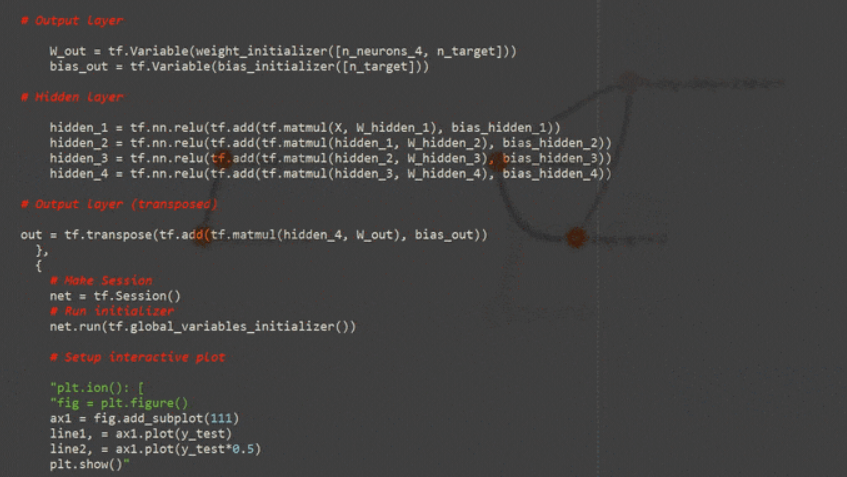 The strategy here is all about options trading. The algorithm looks at stocks and finds these "glitches" and then Altucher recommends trading the underlying options of what he considers to be the best buy alerts provided, similar to Adam O'Dell's 10X Switch service.

And more specifically, the focus here is on weekly options, which are options that function the same way that monthly options do, but expire every week. They are introduced on Thursday and expire the following Friday, lasting 8 days total. He supposedly used to write programs for trading these options back in 2001 when he worked for a hedge fund, so he has some experience in this very area before coming out with his own service.

*Note: I know Altucher calls these "7-day contracts", but this statement isn't 100% accurate.

That said, it's also possible to simply trade the stocks if you aren't comfortable with options trading. Options trading is the focus here and this is what Altucher recommends because it can be much more lucrative, and a guide is provided for those that join this service so that you don't need any experience or knowledge to get started.

As you know, this is a follow-along service where all the hard work is done for you. Of course we'd never recommend just blindly following investment advice here at Green Bull Research, but I know this is exactly what a lot of subscribers end up doing after joining services like this.

Here's a breakdown of what you get as a subscriber:

*Note: He also mentions that subscribers get 3-4 recommendations a month... which doesn't agree with the once per week statement. 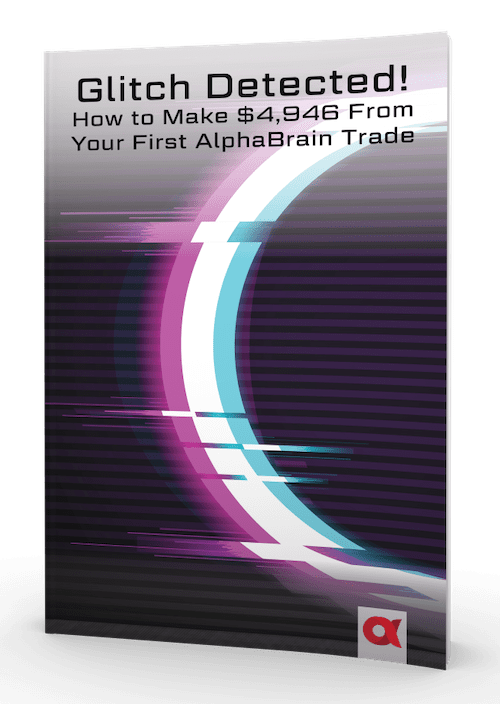 A subscription to this kind of service certainly isn't cheap, and based on what he's providing this makes sense.

The "normal" price is listed at $5k per year. But don't faint just yet, this is normally heavily discounted. Through the one sales funnel I came through it was being sold for $1,995/yr - still definitely not cheap, but a lot better than 5k.

Unfortunately there aren't any refunds. So you'd better be certain this is something you want to buy into beforehand.

Instead of offering refunds there is what Altucher calls a "double secure" performance guarantee. This is a policy where you can get a second year of this service for free if you don't have at least 10 triple-digit winners over the first year or if AlphaBrain doesn't perform with at least an 86% win rate.

If you would like a second year for free because of a lack of performance, or you would like to test your luck trying for a refund, the customer service team can be contacted at 1-844-449-6520.

I'm not entirely sure when this service first came out, but I do know that it is rather new and that there isn't much in the way of historical data... as far as how well Altucher's AlphaBrain recommendations have performed for real subscribers.

That said, in one of the AlphaBrain promotions I came across Altucher showed a bunch of winning trades that his AlphaBrain recommended, which had cummulative gains totaling a massive payout... 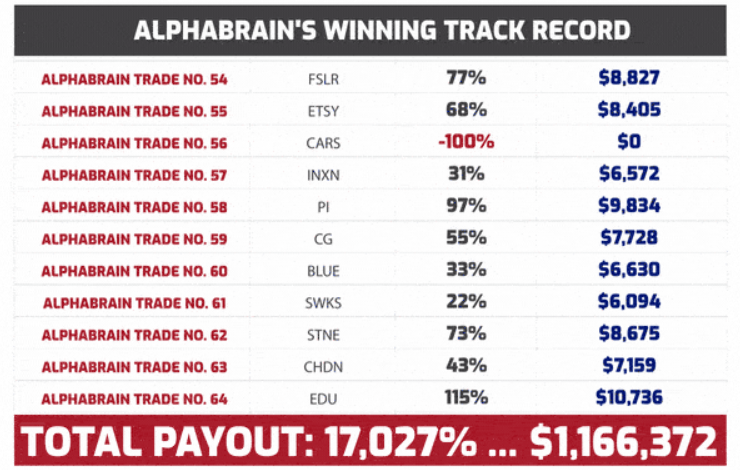 Yes, that looks amazing, but don't get too excited just yet. I have some negative news, unfortunately.

The problem here is something that I hear all the time from subscribers of similar options trading advisory services... and because of this you can't really expect the same results that James gets with his trades.

What I'm talking about is market timing. If you were doing some long-term value-investing like that recommending by Stock Advisor then this wouldn't really be an issue. However, with options trading it's a lot more difficult to get in on a trade recommendation at the right price. Subscribers for similar services often complain about acting on recommendations immediately but still being too late to get in at a good price. And the same goes for selling.

Yes, Altucher has an amazing performance record... but he's the first one in and the first one out of his trades, and subscribers shouldn't expect the exact same results.

*Note: I'm not saying this is a bad service. I'm just saying that duplicate results can't be expected.

Okay, so... Altucher's Weekly AlphaBrain alert is an investment advisory service where he provides subscribers with trade recommendations that he is alerted to from his AlphaBrain algorithm, which identifies what he calls "glitches" in the market. It normally costs $5,000/yr, with discounts often available, but is it really worth joining? Well, this is a difficult question to answer because of it not having a long-standing track-record, but this certainly doesn't mean it's a bad service.

The decision to join or not ultimately comes down to you. Just don't expect to strike it rich like the promotional content often leads one to believe they will. Hopefully this review has provided some value to you and will help make your decision a little easier. As always, let us know what you think about it all in the comment section below. We like to hear back from our readers!