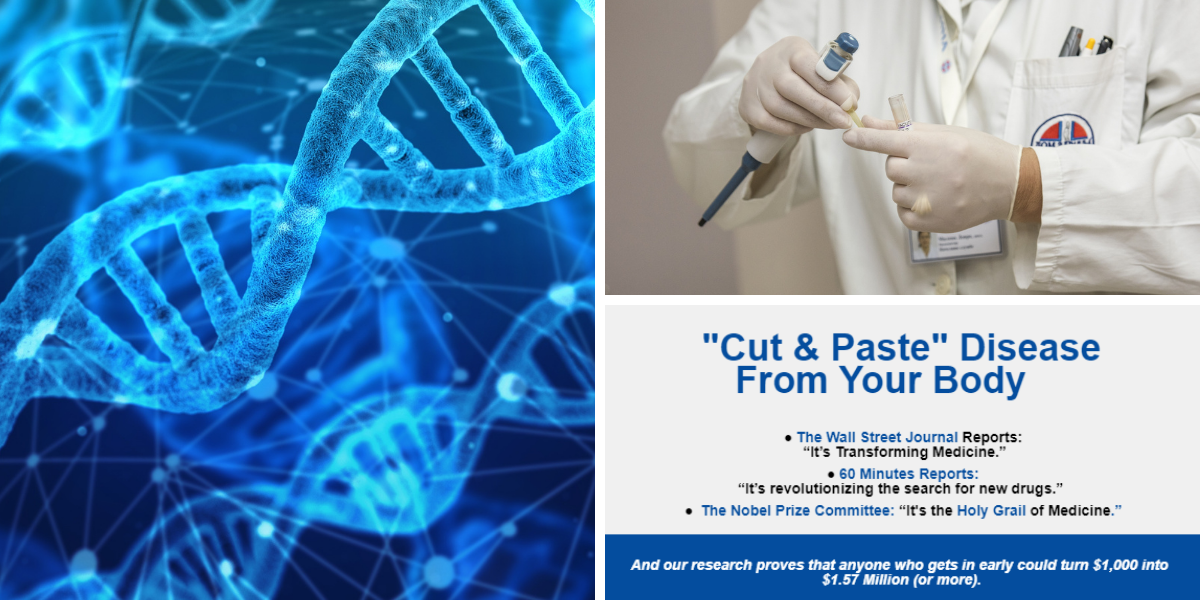 Who wants to turn a small initial investment of just $1,000 into a profit of $1.57 million or more? According to Dylan Jovine’s claims, if you hop on board for his latest microcap discovery, you too could become a millionaire in a matter of months.

In a marketing pitch Jovine posted recently, he talks about a breakthrough cure that can “cut & paste disease from your body” and, according to his claims, there is one small CRISPR stock that has obtained the patent for this ground-breaking technology. You could get the name and ticker symbol of the company Jovine teases by subscribing to his newsletter investment program, Behind The Markets, for $79 per year. Included, you will receive immediate access to the investment advisory service, and seven bonus reports. If you don’t want to pay for the subscription, stay tuned as we are going to reveal everything we were able to find out about the company and the man teasing it. 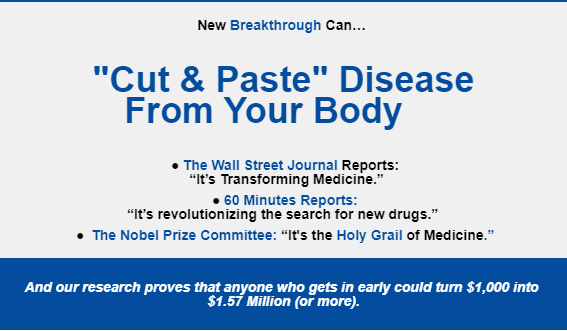 Dylan Jovine is an investment broker with over three decades of experience. He started his career on Wall Street in 1991 and at only 24 years old, he became one of the youngest people in American history to start a registered broker-dealer and market maker firm.

He predicted the 2008-2009 financial crash a year before it happened and has been invited to numerous TV shows to share his expertise. Throughout his career as a Wall Street investor, Jovine claims to have predicted dozens of profitable stocks, including Paramount, American Express, Starbucks, AutoNation, and FactSet Research. He sold his last business in 2013 to take some time off but remained a private investment advisor and began authoring Behind the Markets, “a company whose mission is to bring individual investors the same quality investment research institutional investors have.”

Much of Jovine’s latest marketing pitch talks about the opportunity of investing in CRISPR technology, an innovative concept that can potentially cure thousands of diseases. The author starts by saying that “anyone who gets in early could turn $1,000 into $1.57 million”.

He describes his discovery as a liquid from a mysterious vial that is “so unique that scientists believe it can treat all 6,000 genetic diseases”, including various forms of cancer. We have heard such claims be made before, see: Miracle Antibiotic Company and The Anti-Aging Stock, so you’ll have to excuse us for being just a little skeptical.

To back up his claims, Jovine mentions that already some of the biggest companies in the field have invested massively in the treatment – “Juno Pharma just invested $700 million, Glaxo SmithKline invested $350 million, Johnson & Johnson invested $292 million…” Even Bill Gates and Google Ventures have apparently invested $120 million in this treatment that “has the potential to eliminate genetic diseases for our species.”

However, there is more than one biotech company that relies on CRISPR technology, so how can you choose the best stock? According to Jovine, there are three key ingredients for biotech investment success:

The author says he has already successfully used the technique to identify dozens of successful stocks, some of them soaring 1,007% (BlueBird Bio) and even 850% in just 12 months (Sagamo Therapeutics).

CRISPR is very interesting and controversial at the same time, as it is a technology that can be used to edit genes. Even though the technique is not the first gene-editing method scientists have tried, it’s the simplest, fastest, and most accurate which currently exists, which is why a lot of hopes are riding on it.

This is the part where we tell you that investing in biotech stocks can bring big profits (much like almost anything else) especially so if the underlying business is mature enough and has already received the FDA’s approval or is close to getting it. Otherwise, developing a new medicine, antidote, or antibiotic to cure or treat a disease can and does often take years if not decades, during which you can sit through some real opportunity costs.

The CRISPR Company Being Teased

As for the company Jovine claims to have identified that will bring you profits of over 10,000%, let’s see what clues we have to work with.

From all the details he gave, we were able to identify the company being teased as Editas Medicine (NASDAQ: EDIT). It has generally been referred to as the “winner” in the latest round of the long-running patent fight over the CRISPR/Cas9 gene-editing technology, which will probably remain ongoing for as long as the technology remains in use.

Can Editas Medicine harness the power and potential of CRISPR gene editing to help people living with serious diseases around the world?

The plan seems straightforward, but the execution will be anything but. As the answer to the question of whether or not CRISPR gene editing will prove successful will come down to being able to license the technology and for those licensees to be able to produce real world results with that license. In this particular case, given all the questions surrounding CRISPR and its possible implications, it will require years of expensive trials and rigorous testing before getting final approval by the FDA.

Editas has made some progress in this regard, scoring preliminary trial approval for what could possible go on to be the first in vivoCRISPR genome editing treatment.

It’s worth mentioning here that Jovine’s pitch is not new and the name of this company has first been mentioned about two years ago, in a similar newsletter released by the same author.  The author has pumped up biotech stocks for at least 5-6 years as a fast and easy way to produce good returns and profits of over 1,000%. And, while some of his predictions managed to rise by 60-70%, it’s still a far cry from claims of 1,000% or more.

As long as  you have a long-term mindset and the patience to sit on something for at least a couple of years and let it mature, then a stock such as Editas can prove fruitful in the end. These are anything but fast developing businesses and therefore aren’t suitable for speculators who are strictly looking for short-term profits. Given the amount of time that goes into new medical discoveries, combined with the time required for test trials and the approval of the FDA, we’re looking at going to market only after at least 3-4 years for most biotech stocks.

Those who are a bit further ahead with their trials and already received early FDA approvals such as Editas, can take slightly less than this but even then it’s still a gamble as you also need to take into account the value of the patent, its lifetime, and how much licensing revenue it can really bring in before something newer and better is eventually developed.

What are your overall thoughts on genome editing? Are we going too far or is this just a natural part of innovation? Have you invested in any CRISPR bio stocks? Let us know your thoughts in the comment section below.