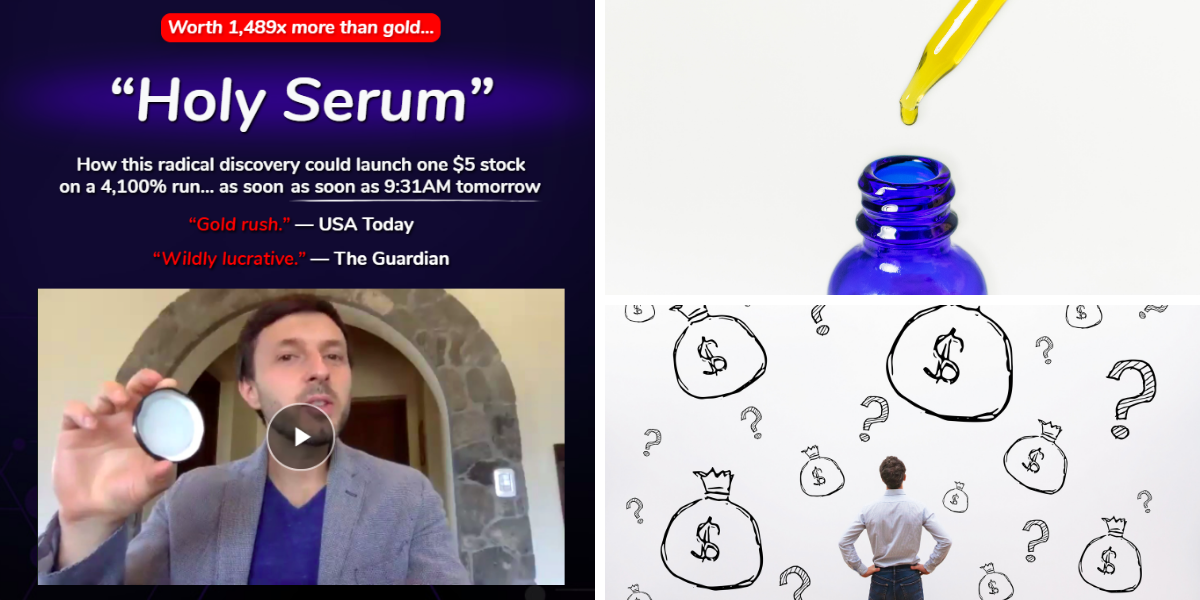 Nick Giambruno from Casey Research has been teasing the opportunity to invest in what he calls "holy serum". He claims it's going to be a gamechanger in the health-field and thinks that investors stand the "shot at 4,100% gains if you act today".

The opportunity he's teasing is to invest in one small company behind it all, which we'll be conveniently exposing for you in this review... for free.

But first let's start off this post by going over the teaser and what we are told about this supposed breakthrough. Nick Giambruno is the guy behind it all. He is a chief analyst over at Casey Research and an expert when it comes to geopolitics. You can often find him writing on the topic as well as things like international banking and obtaining second passports. But what we're interested in here is how he spends his days traveling around the world looking for good investment opportunities (which he claims to have found here). What we are looking at here is what we are told is a new biotech breakthrough that has nothing to do with the coronavirus but is supposedly a breakthrough of momentous proportions... giving investors like you the "shot at 4,100% gains if you act today".

Yes, you read that correctly. Giambruno is predicting possible 410x gains if you invest in the company "at the forefront of it all".

Nick and his team claim this "could be the most lucrative biotech play we’ve seen in years" and right now the company being teased is trading at just $5 a share.

The investment opportunity is all about a compound that is supposedly going to take on the pain relief and anti-inflammatory markets by storm, but we'll get more into this in a bit. What you should know, and probably already do, is that the teaser ends in the typical fashion... as sales pitch... but luckily you aren't going to have to buy into anything today.

The only way to get the details on the stock Giambruno is teasing here is to get your hands on a report titled The "Holy Serum" Millionaire Playbook... However, in order to get this report you will have to subscribe to the subscription advisory service that is being pushed, Crisis Investing, which "normally costs $4,000" but has been discounted to "just $1,795".

The good news is that you won't have to pay a penny to find out the company being teased. Just keep reading.

What Is This "Holy Serum"?

Before we reveal the company Giambruno thinks is going to make us all filthy stinkin' rich by providing gains of 4,100%, let's talk about what the heck this "holy serum" is in the first place.

Some of the vague details provided in the teaser were that it is a compound discovered by an Israeli scientist at the Hebrew University, and he also mentions "cannabinoid compounds" at one point and refers to what sounds like the endocannabinoid system.

Furthermore, it was talked about that this compound has the potential to treat Epidermolysis Bullosa, the rare genetic skin condition that results in extremely painful blistering skin in children.

He let the word slip at one point in the teaser and it makes sense that a cannabinoid compound is what he's talking about here... and yes, it was at Hebrew University of Jerusalem that Professor Raphael Mechoulam first isolated the psychoactive ingredient of Cannabis Sativa (not the cannabinoid we're focused on here though).

The cannabinoid Giambruno is talking about is said to treat everything from pain & inflammation to Epidermolysis Bullosa and glaucoma... and we were told that "the human body has evolved an entire system specifically keyed to this compound".

Sounds amazing, and I'm sure we all have heard of the investment potential in this newly emerging industry.

According to Data Bridge Market Research, the cannabis market overall is predicted to grow at a CAGR of 20.25% to hit $82.19 billion by 2027... coming from $10.31 billion in 2018. And this is overall. A new breakthrough extraction technology or breakthrough findings for less-studied cannabinoids could have big profit potential.

Without further ado, let's reveal this potential 41x-bagger (according to Giambruno).

Some of the clues we were given include that:

We know that Tetra Bio-Pharma is a biotech company that was given the orphan designation by the FDA for a cannabinoid-based drug it's been developing for Epidermolysis Bullosa, but the clues given match up better with InMed Pharmaceuticals.

InMed Pharmaceuticals (IN.TO in Canada, IMLFF on the OTCQX in the US) is the "holy serum" company, which is a pharma company with the focus of developing cannabinoids to treat several different diseases, Epidermolysis Bullosa and glaucoma being two of them.

INM-755 is a cannabinol topical cream product that they are currently working on for the treatment of Epidermolysis Bullosa, which is said to be the first to reach clinical trials as a therapeutic product in this area. And then we have the topical eye drop product, INM-088, which is for the treatment of glaucoma.

*A topical cream? This matches up nicely with the "serum" term being used.

InMed's focus is on the cannabinoid CBN (cannabinol), which has been found to upregulate the expression of keratin, improving skin health and reducing blisters caused by EB, and has also been shown to have neuroprotective properties and the ability to reduce intraocular pressure... helping with glaucoma.

The hints provided in the teaser match up pretty well. I was even able to find some information on the Chinese billionaire, Li Ka-Shing, having invested in InMed - couldn't find any information on Peter Thiel investing here, but you can't always take the information provided in investment teasers to be very straightforward, and for all I know Giambruno could have been talking about some indirect investment in some way.

*Note: The company was trading at under $5 a share for a while but recently had a bump in price, so this clue doesn't match up that great anymore.

Okay, so we know the company and we know what they are working on... but is this really a 4,100% profit opportunity?

Don't count on it anytime in the near future, that's for sure.

InMed's testing for their EB treatment is in phase 1 of testing and, although results could be released at anytime, it's more than likely not going to be earthshattering.

InMed holds a lot of promise and could definitely be worth a look, but it's still a small company (market cap way under $100 million) and it's "drugs" are still early-on in their testing.

As always, invest with caution.

And there you have it folks! You're welcome.

As always, let us know what you think of this stock pick in the comment section below. Is it worth the investment? Is it a 41x-bagger?