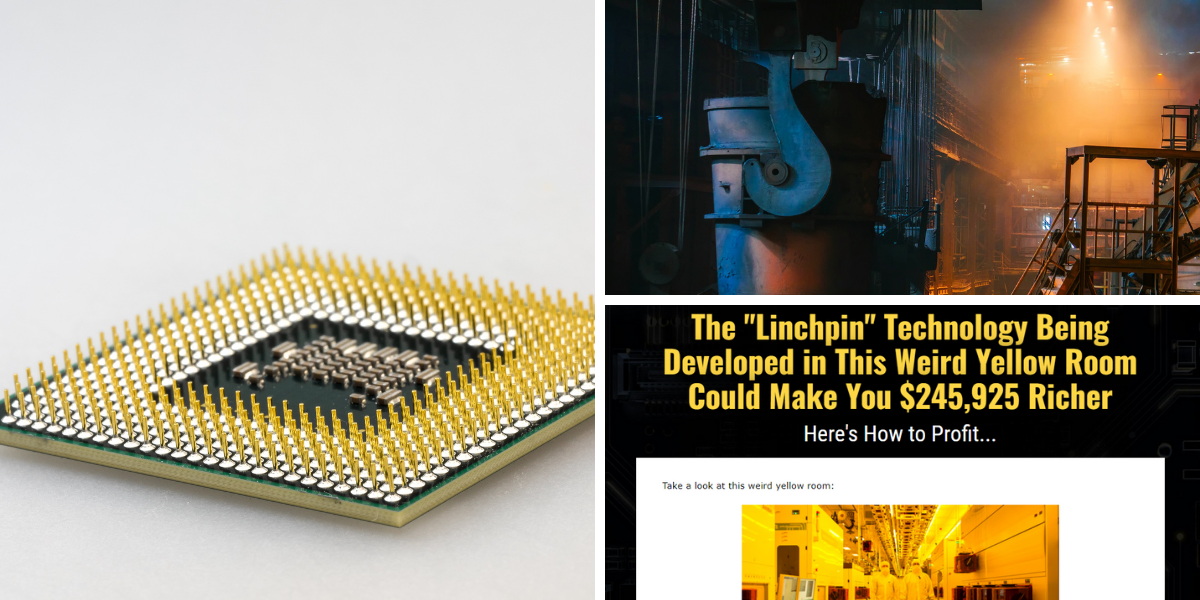 What if there was a true “linchpin” that gives life to every other technology modern society relies on? The only problem is that America is NOT a major manufacturer of this technology.

Today, Chris DeHaemer is here to tell us about a game-changing “tiny company solving America’s biggest crisis” and the ONLY one in existence that can manufacture this “linchpin technology”.

The “linchpin” technology being developed in this weird yellow room could make us $245,925 richer Chris DeHaemer is the creator and managing editor of the Bubble & Bust Report at Angel Publishing, where he has been publishing investment insights for over 10 years. He is a contrarian investor whose portfolio has beaten every major market index for 15 of the last 16 years. Chris has had several presentations reviewed here, including his “End of Bitcoin” Teaser and Spatial Computing Company.

Getting back to the weird yellow room, it’s huge. More than 80,000 square feet to be exact and it’s located just 15 minutes away from one of America’s most prestigious universities. Chris says its THE most important location in America right now – both economically and politically. Apparently, a whopping $170 million in Pentagon money is flowing through this room’s walls and thanks to the passing of Senate bill 1260, up to $52 billion with a B more could soon follow, this time from Congress.

Yet few people have ever heard of it and the general population doesn’t even know it exists. Unfortunately, they’re about to miss out on the GREATEST investment opportunity of the decade, along with their shot at turning a tiny stake of as little as $2,500 into as much as $245,925.

Everything we’re talking about here has to do with the TINY piece of technology you see right here: At first glance, it doesn’t look like anything special. But Chris says we’re looking at the most important technology in the world today.

It’s present in every tech product a company creates, from your phone to your computer. It’s in your car and even in the defense systems that keep our country safe. Without this linchpin technology, these things simply would not be able to function. However, there’s one major problem…

Since the 1990s, we’ve been outsourcing its production and now our supply is almost entirely dependent on a handful of companies in Asia, many of which are based on an island only 100 miles off the coast of Southeastern China.

Now this is all about to change, because of the unknown company that the weird yellow room belongs to. It just went public in mid-2021 and it’s still under the radar of most mainstream investors, except for those reading this today.

The only way we’re going to find out the name of this tiny company, is if we subscribe to Christian DeHaemer’s Bull & Bust Report for a special new-member price of just $99. This would get us a special report called: “Make a Fortune From the Tiny Company Solving America’s Biggest Crisis”, containing this tiny company’s name and ticker symbol and some easy-to-follow instructions for getting in on the absolute ground floor today. We will also get 12 editions of the newsletter, “buy now” profit alerts, an exclusive members-only website, and a whole lot more.

What is “THE Most Important Technology”?

We’re suffering an unprecedented shortage of our most important technology…which Chris says is the semiconductor – also known as the microchip. These chips are the KEY part of every electronic device we use, from consumer electronics, with Apple losing billions as it’s forced to halve production of some of its flagship devices to the auto industry, which is losing hundreds of billions of dollars as we speak.

The current chip shortage is without a doubt THE most pressing issue facing our country right now. Tesla CEO Elon Musk agrees:

It’s also affecting people like you and me, as the prices of everyday tech products like laptops, phones, printers, and graphics cards are as much as $350 more expensive.

Some say it was the pandemic that sparked the shortage, others such as Bloomberg think it was “poor inventory planning”, still others contend that it was the very beginning of a hyper-inflationary period. Whatever the actual underlying cause, it was capped by our fragile supply chain.

Consider this fact, the U.S. used to be global leaders in chip manufacturing. In 1990, we were making 40%, nearly HALF of all the world’s chips! But then, to save on costs, manufacturers started outsourcing production to only a handful of companies in Asia. Now, domestic chip manufacturing only accounts for 12% of the world’s supply.

The majority of chip manufacturing now happens in Taiwan. More specifically, by a little-known Taiwanese chipmaker called TSMC, or Taiwan Semiconductor Manufacturing Company. It’s not a stretch to say the world is dependent on this company for its chip supply.

But its not all doom and gloom, as chip manufacturing could be coming back home and the federal government is putting up tens of BILLIONS of dollars to make it a reality. As you may have already guessed, the tiny company Chris is showing us today is poised to receive a HUGE chunk of this production. Let’s find out what it is.

Revealing The Tiny Company At The Center of U.S. Chip Production

Chris (thankfully) provides us with some pretty good clues as to what this company could be:

Based on all of the above, we think the company Chris teases here is SkyWater Technology, Inc. (Nasdaq: SKYT). Here is what led us to this conclusion:

The one BIG thing SkyWater has going for it, is the decided lack of domestic competition. As unlike AMD and NVIDIA, which are what’s known as “fabless” chipmakers, meaning that they don’t manufacture chips at all. But rather they only design chips and then outsource their production.

SkyWater is the ONLY domestic company that has the capability and facilities to produce chips for outside customers. This is already proving lucrative, with the Department of Defense rewarding it with a $170 million contract to begin making a new variety of custom chips for it.

The company has no earnings to speak of as yet, but it has all the characteristics of a classic growth stock in its early stages.

Is domestic chip production the answer to the supply crisis? Tell us what you think in the comment section down below.