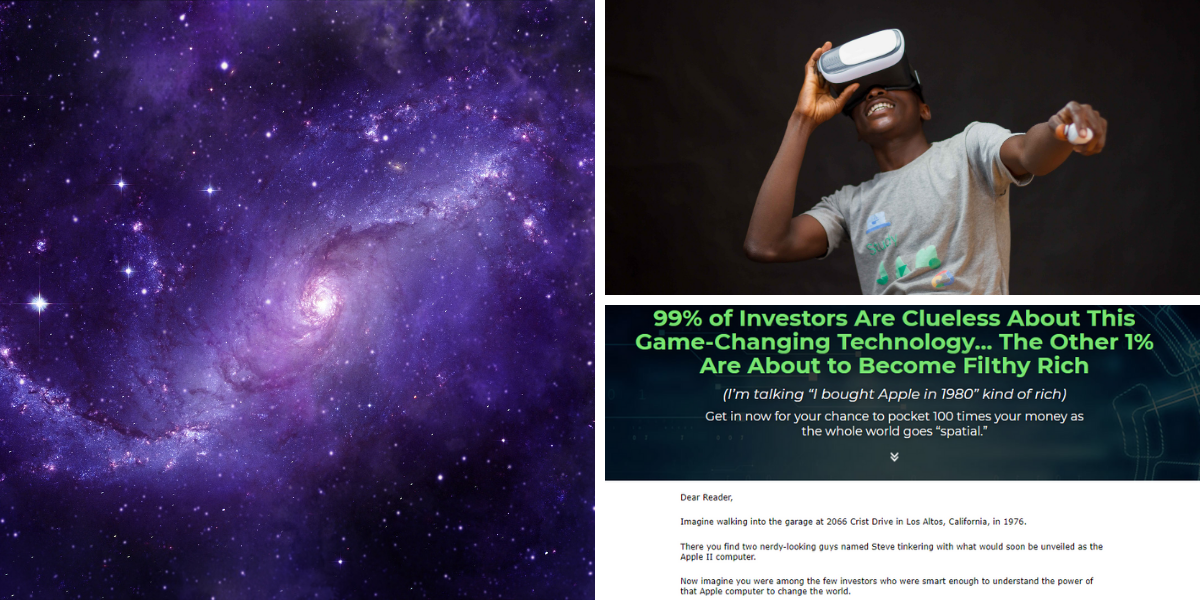 Thanks to a world-changing technology of course, that 99% of investors are also apparently not yet aware of yet, YOU have an opportunity to “become a millionaire from just one stock”. The video says it is going to “pull back the curtain on the next generation of quantum computing” and one “spatial computing company” that “will shock us”. Let’s see if it can live up to the galactic hype, I’m sorry I couldn’t resist.

Our narrator Dave Roberts starts by admitting that the “claims made thus far are pretty unbelievable”, but if we bear with him, Bull and Bust Report analyst Christian DeHaemer will show why we are on the verge of a massive revolution in quantum computing, “one with the power to change the way we all live, work, and play”, just as Apple did decades ago.

Angel Publishing is an investment research boutique, providing ideas and strategies on finance, markets, human nature, and obscure financial trends. The Baltimore, Maryland based firm offers several different, subscription-based investment newsletters, which are compiled by in-house analysts such as Christian DeHaemer, who has been active since 1996, showing readers the fastest, safest ways to make money and grow their retirement savings.

Chris promises to walk us through the technology step-by-step, so that “we can see what he sees” and learn why this technology is already being deployed worldwide at businesses such as Amazon, Facebook, and even John Hopkins University. He assures us that this is not some tweak to already existing technology or a gimmicky gadget, but a real “tech revolution”. The best part is, “you don’t even have to understand the intricacies of how it works, in order to get rich from it”. That is a little less reassuring, but let’s see where it goes.

We are next told that we are seeing the “birth of an entirely new industry” and if we invest in it right now, we can reap profits of more than 100x on our money or $1 million for every $10,000 invested. To say that we have heard similar claims from Angel Publishing and Chris DeHaemer before would not be a stretch. See Bailout Millionaires and Chris DeHaemer’s Tap and Go Stocks, which we previously covered here.

As we know, such opportunities don’t come around too often and that is why we must pay for the privilege when they do abound or so we are told. In any case, the pitch here is for The Bubble & Bust Report investment newsletter, which was created and is edited by none other than Chris DeHaemer and is published by Dave Roberts.

A one year subscription to the Bull and Bust Report costs $99 and it comes with a six-month money-back guarantee, in addition to certain other benefits such as, members-only insights, email alerts, and detailed data on all recommendations, among other perks.

Is This “Spatial Computing” Opportunity Legit?

Before we can answer that, we must first get a better understanding of what just what is meant by “spatial computing”. Host Dave Roberts tells us that “it will change the way you interact with everything in the world around you”, before revealing that he is talking about Augmented Reality (AR).

He also calls this one of the biggest, most lucrative tech discoveries yet, before letting us know that current Apple CEO Tim Cook is apparently also a big fan of the technology, with Apple already having invested over $1 billion into it. However, if (and this is a big if) it ends up amassing over $350 billion in new revenue over the coming years, as Roberts mentions it may just turn out to be worthwhile after all. Here is what makes him so confident:

These are just a few of the many potential uses of AR tech. In short, is the technology legitimate? Yes. Augmented Reality (AR) tech is basically an interactive replica of a real-world environment, where the objects that reside in the real world are enhanced by computer-generated perceptual information. It has been popularized by its use in video games, but as can be seen, it also has many industrial and business-to-business uses.  It was originally invented in 1968 by a fellow named Ivan Sutherland who built this awkward looking contraption that went on your head:

AR headsets and the technology underpinning them have no doubt come a log way since then, but can it produce the kind of “life changing” wealth that this teaser is proclaiming? Well, that all depends on the “spatial computing” businesses you opt to invest into.  Lets find out which publicly traded stocks are actually being pitched here.

Dave Roberts tells us that Chris DeHaemer has identified three specific “spatial computing/augmented reality” companies and that he is going to walk us through “each of them and give us all the details we need in order to profit from them”.

Given that we don’t have all that much to go on, here are our most educated guesses for what these stocks could be:

Purely by traditional valuation standards, such as a discounted cash flow analysis as shown below thanks to Value Spreadsheet. 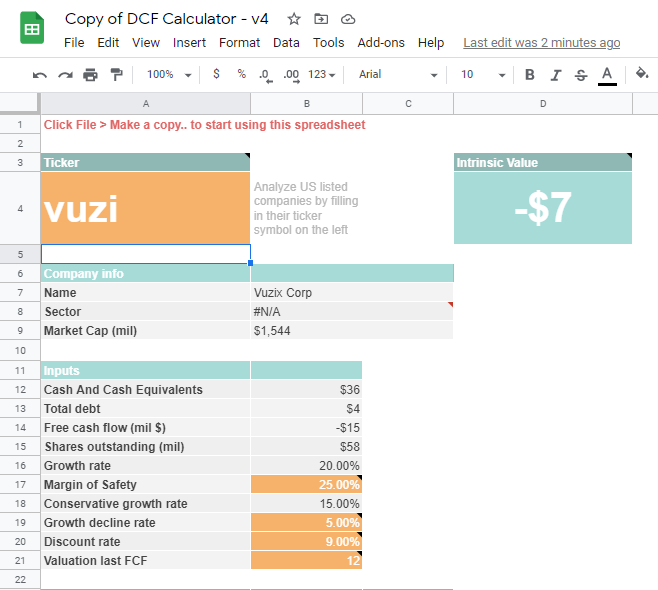 Neither Vuzix Corp. (as show above) or Coherent Inc. are buys at the present time at least. The reason for this is quite simple, as the underlying cash flow from operations of both respective businesses are presently in negative territory. This is telling, as it indicates a pair of businesses which are still some time away from scaling their operations to a point where they profitable serving the target markets which they presently serve.

This can certainly change, but you shouldn’t be expecting to make “100x your money” over the short-term, as there is no justifiable basis for these stocks pricing higher than they already are.

Are you a believer in Augmented Reality (AR) technology? Do you foresee it delivering the kind of long-term mega-profits promised in this teaser? Let us know what your crystal ball tells you in the comment section below.