Casey Research’s “COVERT-23” Teaser – The Reversal of Everything You’ve Come to Know? 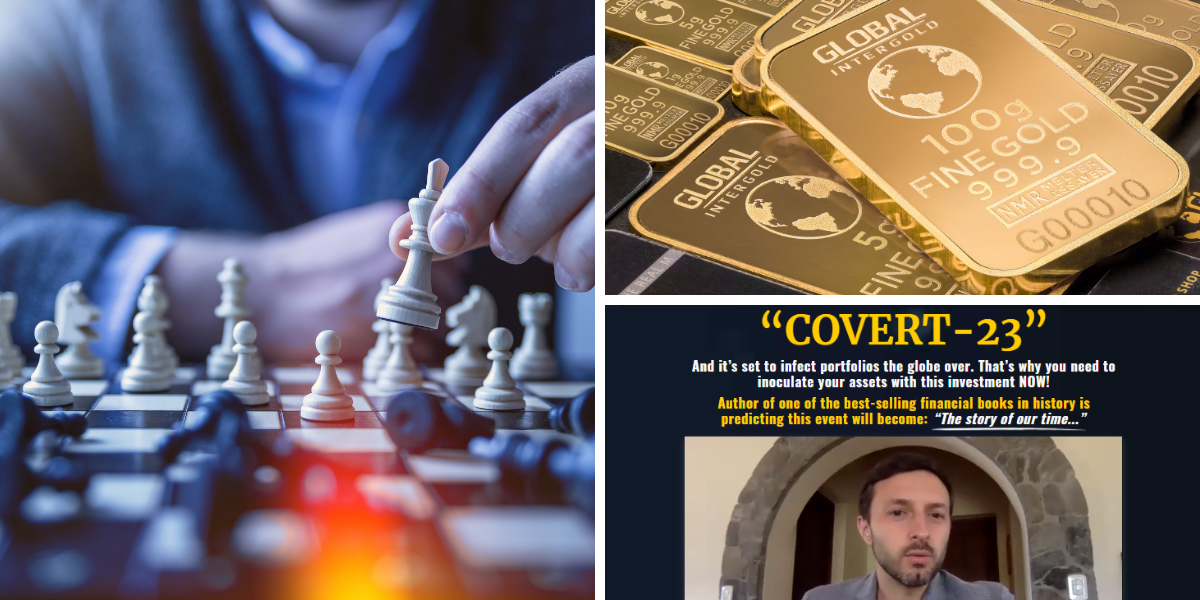 Casey Research is one of the most popular and prolific investment newsletter advisories over the past 30 years and counting. In one of its latest newsletter teasers released by Chief Analyst Nick Giambruno, he talks about how there are “23 firms (mainly banks) that form a giant ‘Super-Entity’ that controls around half of ALL the money on the planet” and thinks that what they are currently doing will lead to another market crash.

According to the author, “all retirement accounts and pension funds and all savings accounts, and even most money market funds (and especially ETFs) should be regarded as money controlled by the COVERT-23”. Let’s see what Giambruno’s has uncovered and how relevant the information he shares in his presentation is.

The author begins his pitch by saying that “despite all the millions of registered companies the globe over, most of the power (and risk) is concentrated in the hands of just 23 firms” and, “though you may know the names of some of them, such as JP Morgan Chase, Bank of America, State Street Corporation, and Shell, many of them you may have never heard of”. 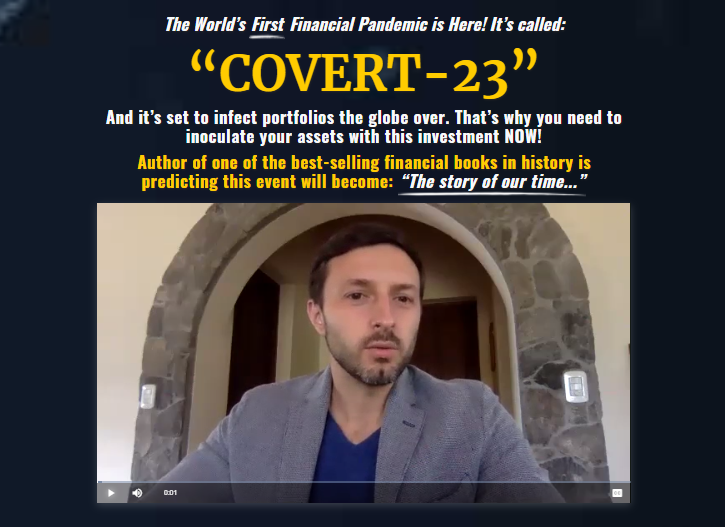 Nick Giambruno is the Chief Analyst of Casey Research’s flagship advisory, The Casey Report and its premium “value investing” advisory, Crisis Investing. His writing focuses on geopolitics, value investing in crisis markets, the global cannabis market, international banking, and surviving a financial collapse, among other topics. In fact, we have previously covered several of Casey Research’s teasers here in the past, which more or less fit this description. See Buffett’s #1 Private Investment and Casey Research’s Lithium Mining Company.

He claims that these multinational companies “are the invisible hands that control our financial lives… the influence that guides investment trends and sets the price of almost everything… from silicon to silly putty and from uranium to you name it”. He continues by saying that “they are the red thread that runs through the war on terrorism, globalization, deregulation, and dollarization” and they are the silent majority shareholders of some of the biggest companies in the world, including but not limited to: Procter & Gamble, eBay, Disney, and also large minority shareholders in other major stocks, such as Amazon, Apple, Google, Facebook, Twitter, and VISA.

Giambruno’s main concern is that the people behind the COVERT-23 companies are the ones running the world, controlling the media and the narrative, having all the power, whereas governments and even entire countries bend down with little to no say on national sovereignty.

The idea that a small group of people and/or companies control the entire global economy is not new and has been vigorously discussed online, in barber shops, and even among parents at children’s birthday parties, especially in times of stress and crisis. With The Great Recession of 2008 and more recently the Coronavirus pandemic being two such times. This is easily understandable, as while millions of Americans have lost their jobs, multinational companies like Apple, Amazon, Uber, and Zoom have reaped billions of dollars and their stocks have skyrocketed as a result.

What Giambruno pitches is the fact that our current economic and financial system is no longer viable over the long-term and the risks of yet another collapse are tremendous if the same global cabal are allowed to continue to maintain control.

Certain solutions are pitched as possibilities in order to avert the upcoming potential disasters caused by these COVERT-23 companies in the next financial crisis, and they are laid out in The Casey Report, an investment newsletter subscription sold for $49 per year. Included in this price, you will receive 12 monthly issues of the report, as well as three bonus reports, like the one teased in the presentation: “Your COVERT-23 Inoculation Program: How to Survive the Coming Collapse of Western Civilizations”. 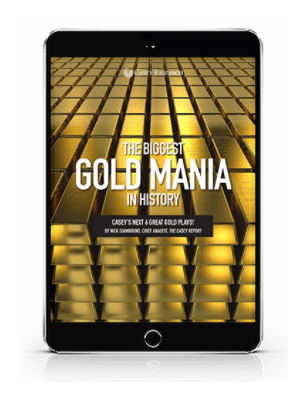 The report claims to reveal to you the exact names of the Super-Corporations that make up the “COVERT-23”, three must-do money moves that will help you make smarter investment decisions and which are the three “next big shake-out winners”.

The second bonus report is entitled “The Biggest Gold Mania in History: Casey’s Next 6 Great Gold Plays!” in which you will find the names and ticker symbols of six golden stocks you should own. According to the opinion of the Chief Analysts at Casey Research, gold will become one of the most desired assets and a token of economic stability in the world of chaos created by these super companies.

When 90% of the assets people own are controlled, in one way or another, by some of these super companies, the only way to make sure your purchasing power remains intact is to exchange some of your assets and cash to gold.

The basis of this new teaser from Casey Research is that a group of only 23 companies currently control most of the world’s finances and majorly influence and even dictate every aspect of our lives, including what we eat, what we listen to, how we use our money, what we see on television, and more.

Nick Giambruno, the author of this teaser, believes that these companies are the reason “why the inequality gap has become so widespread in America today”. He claims that, when adjusted for inflation, “middle-class wages have been frozen for the last four decades”, while the earnings of the top 1% have increased at an incredible pace, be it during times of economic prosperity crisis.

He also says that currently, the main purpose of a company is to maximize short-term profits, often at the expense of its long-term health and that of its employees, which is one of the main reasons for the current state of consumerism, where everything is meant to last as little as possible. And, thanks to the deeply flawed laws passed over the past few decades, “Wall Street Banks are no longer just banks” but vast holding companies that control almost all markets and the global ETF market. According to the author, “they now own over 14,000 subsidiaries, barely 19 of which are traditional banks.”

Collectively, they “now wield more power over the price of oil than OPEC!” and “the more power is concentrated, the more risk it produces”. In other words, if any of these companies fail, they have the potential of creating a domino effect so devastating, that it could easily rival or even exceed the Great Depression of 1928-1933.

In the wrong hands, so much power can destroy entire economic systems, leaving whole countries on the verge of financial collapse and generating thousands, if not millions of unemployed Americans.

Moreover, the author considers that “today, the COVER-23 alone control and manipulate assets valued in excess of $183 trillion!” By comparison, all the stocks listed on the Dow Jones Industrial Average, combined, are only worth $10 trillion, which shows the fragility of our economy when most of the financial assets are concentrated in the hands of just a few mega-banks.

“The COVERT-23 harbors most of their leverage in ‘Financial Hyperspace’ – it is that parallel universe of side bets and speculative mutations that you would now know as ‘the over-the-counter derivatives market”, meaning that the COVERT-23 and their Derivatives Portfolios could be the final pin that will pop the ‘Everything Bubble’… causing a financial crisis of historic proportions. According to Giambruno’s predictions, this new crisis could be imminent and very few people are protecting their assets, but instead only taking on more risk.

Nick Giambruno says that “we’ve hit an inflection point in the technological growth curve…where human progress is about to go completely off the charts”, and it is called The Law of Accelerated Returns. According to the author, we’re now experiencing many disruptive technologies erupting all at once, including Artificial Intelligence, Virtual Reality, Augmented Reality, robotics, genetics, 5G, 3D printing, blockchain, biosensors, nanotech…you get the picture. This means “we could crash harder and faster” but could also “bounce back bigger and better”.

He goes on to say that gold is making a comeback as more people become aware that government’s and central bank actions are stripping them of their purchasing power. He calls this the “the most deeply rooted commercial instinct of the human race” and there has been one asset that people have historically resorted to in times of crisis for thousands of years.

The big concern is that nearly all retirement funds, accounts, savings accounts, and money market funds are controlled by the COVERT-23 and you should consider cashing some or most of them out and transferring these these assets into gold. Therefore, what Giambruno is really pitching here is an investment in the shiny metal and 6 separate gold stocks.

This is the part where Dr. Stephan Leeb – one of America’s biggest commodity analysts steps in and says that “buying gold now…is equivalent to buying a stake in what will be one of the greatest bull markets of all time”. And he’s not the only one to predict the price of gold going up during these uncertain times. Giambruno promises to reveal the names of each of his six separate gold stocks in a special eBook entitled “The Biggest Gold Mania in History: Casey’s Next 6 Great Gold Plays!”.

Unfortunately, Nick doesn’t reveal enough details in his teaser for us to even venture guesses at what these gold stocks may be. However, we can unequivocally state that investing a portion of your assets in precious metals (gold and silver) wouldn’t be the worst idea in the world to say the very least. Especially, while the price is still what it is today and it still represents only a very small percentage of institutional and individual portfolios.

What do you think about the claims in this newsletter? Accurate or needing more context? Are you already invested in physical precious metals? Let us know your thoughts in the comment section below.