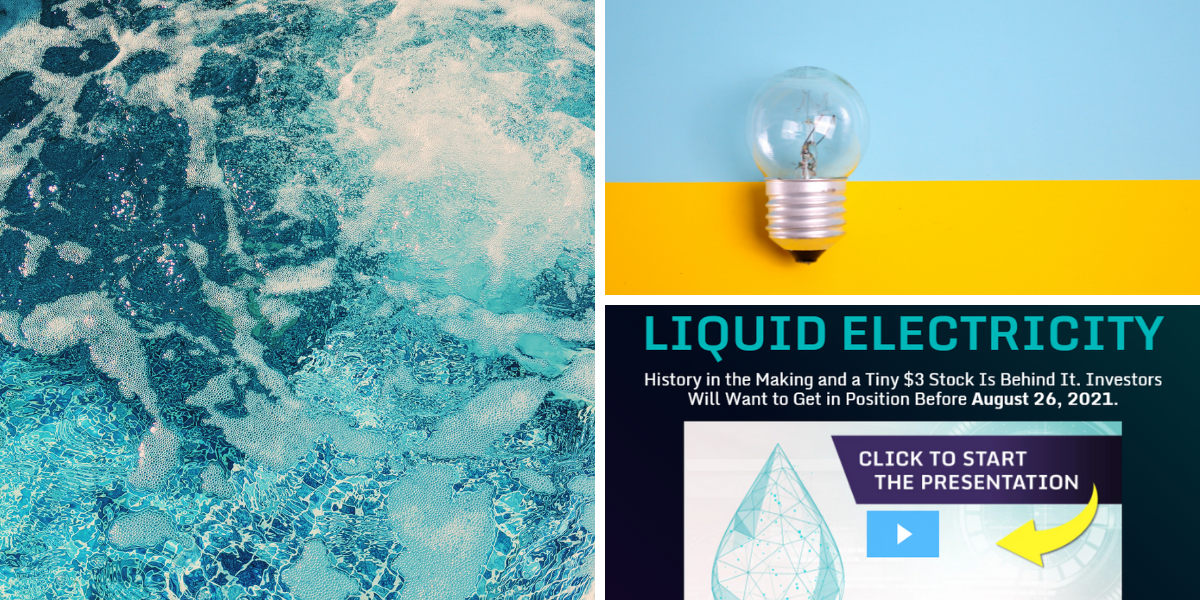 In one of his latest videos, energy and infrastructure expert Dave Fessler teases the opportunity to invest in a brand new energy-saving technology… “Liquid Electricity”. He also talks about “one tiny, under-the-radar company, selling for just $3 a share” to get us hooked and believes that this particular technology is “200x more powerful than lithium, cleaner than gas, and stronger than solar”.

Lets see if this really is every investor’s dream of finding that one stock at the right time, place, and price or just another overvalued “growth” stock.

Fessler starts his pitch by talking about a small stock that he believes will be very successful and to which he refers to as “liquid electricity”. He quotes Reuters as saying that its “a lottery worth playing” for investors and that it will “play a key role in the global push to produce carbon-free energy.” This is why he reckons it can bring huge capital appreciation over the short-term. 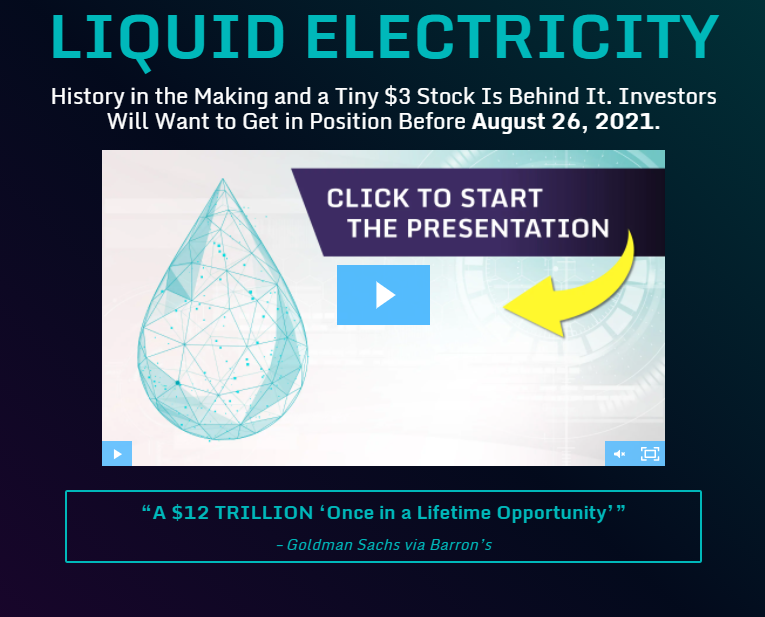 David Fessler is the Engineering Strategist of The Oxford Club. He is the Editor of the Extreme Disruptions Trader newsletter and also a Contributing Editor to Strategic Trends Investor and Profit Trends. Dave has been investing for nearly five decades and he is also an author, having written The Energy Disruption Triangle: Three Sectors That Will Change How We Generate, Use, and Store Energy. We have covered some of his pitches here in the past: The Next Stock of the Decade and “Next Tech Giant” 5G Stock, among others.

Dave says that this new technology can harness the most abundant form of power on the planet, by combining both water and electricity. He also talks about “a major catalyst on the horizon for the stock of this liquid energy company… set to happen on August 26th, 2021”.  Unfortunately, Fessler doesn’t offer any additional clues about the supposed August 26th event, so we’re not sure if it has any relevance.

By now you likely already know the drill, all this is a set up to get you to subscribe to one of the Oxford Club’s investment newsletters. This time around, the pitch is for the Extreme Disruption Trader which will run you $1,495 per year. 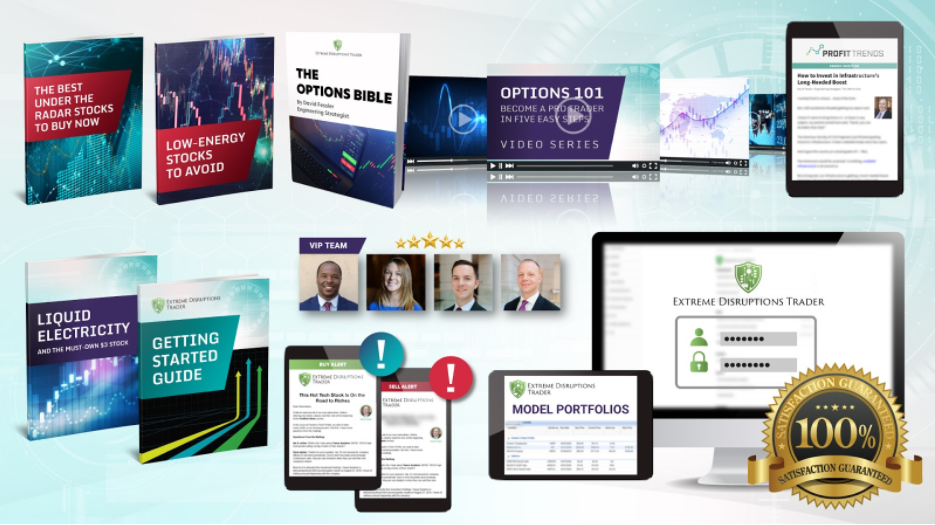 For this money, you will get 52 weeks of the newsletter, weekly portfolio updates, investment recommendations, optional text alerts, access to the main report of the program, “Liquid Electricity and the Must-Own $3 Stock” which will give away the name and ticker symbol of the company being teased here, as well as other bonus reports and benefits.

What is “Liquid Electricity”?

What Fessler does elaborate on however, is that “this tech is a source of power that can be transported anywhere….in trucks or through pipelines, with no need to build NEW infrastructure. But simply modify the one that already exists.” Dave mentions that “the unique type of energy it produces… has ***200 TIMES*** as much energy as lithium-ion batteries, the kind you’d find in a Tesla!”

Despite any claims to the contrary, this is not new or revolutionary as the concept behind “liquid electricity” has been teased and hyped up for the past couple of years. Many investors, advisors, and business publications have talked about the benefits of creating an alternative energy source that is cheap, green, easy to store, and isn’t solely reliant on the weather.

So, what is this type of power Fessler teases? It’s nothing more than hydrogen that is supposed to have “the highest energy per mass of any fuel”. As we previously mentioned, the author isn’t the first one to talk about the miraculous energy powers of hydrogen but he is the first one to refer to it as “liquid electricity”.

As energy demand increases, renewable sources of clean energy like solar or wind face the never ending problem of stocking the surplus. On a good day, with the help of wind and the sun, mills, and panels can generate enough energy to heat an entire household or perhaps even a building. However, any surplus generated by good weather conditions cannot be stored so it will automatically go to waste.

Hydrogen solves this problem and since it doesn’t rely on any particular meteorological phenomena, it represents a suitable alternative over the long-term, since it works in all weather conditions. This is where our mystery company comes in, as the author mentions that a tiny company has designed a machine that can hook up to existing power grids and using just the two elements mentioned at the beginning of this article – water and electricity, convert excess power into storable fuel.

This is achieved through a system referred to as an electrolyzer, that uses electricity to divide water molecules into hydrogen and oxygen and then stores the created power in a tank for future use. This is unlike solar or wind systems that cannot store excess generated power. It all happens “through a process you may have heard of called electrolysis, whereby the electrolyzer produces positively charged hydrogen”.

The procedure is a little bit more complex than what we explained here, but those who are into the technical details can always read more online. Overall, we are talking about a huge market opportunity as “countries could begin developing MASSIVE power reserves”, which could potentially lead to energy independence.

Turning hydrogen into a renewable and sustainable source of energy has been and is the goal of several companies, which one is Dave talking about here? Lets see clues Dave dropped for us.

So, what is this mysterious company Dave Fessler is pitching? We think its Norwegian company NEL ASA, which has its primary listing on the Oslo Stock Exchange under the ticker symbol (OSL: NEL) and secondary listing in the US, as an ADR (OTC: NLLSY). Here’s why:

According to the author, “this company hopes to flip the switch on the first test phase of the world’s only autonomous plant, a fully operational, 100% automated facility making electrolyzers”.

Is This Company The Holy Grail of Energy Storage?

NEL describes itself as a “global, dedicated hydrogen company, delivering optimal solutions to produce, store, and distribute hydrogen from renewable energy”. Thus far, they are the biggest manufacturer of hydrogen fueling stations in the world, but time will tell how long this early lead lasts.

Value Spreadsheet Premium shows us that the business has decent underlying economics: 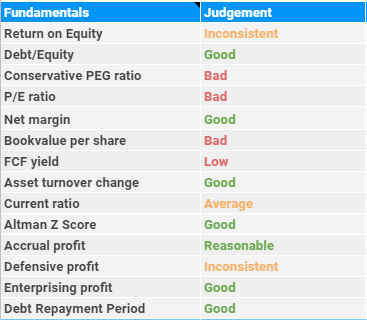 And it does have a history which dates all the way back to 1927, building what was at that time the world’s largest water electrolysis plant in Rjukan, Norway in 1940. The primary competitive advantage of NELS is its intellectual property, with 14 technological patents to its name. These however, will expire at some point in the future, meaning its current advantage will dissipate over time.

The current price/earnings ration of 19.5x earnings is decent, although there is no annual capital distribution to shareholders in the form of a dividend to speak of. Overall, you could do a whole lot worse than NEL.

What do you think of hydrogen being the future of energy? Are there better sources out there or will the winner(s) in this space be our new overlords? Let us know your insight in the comment section below.