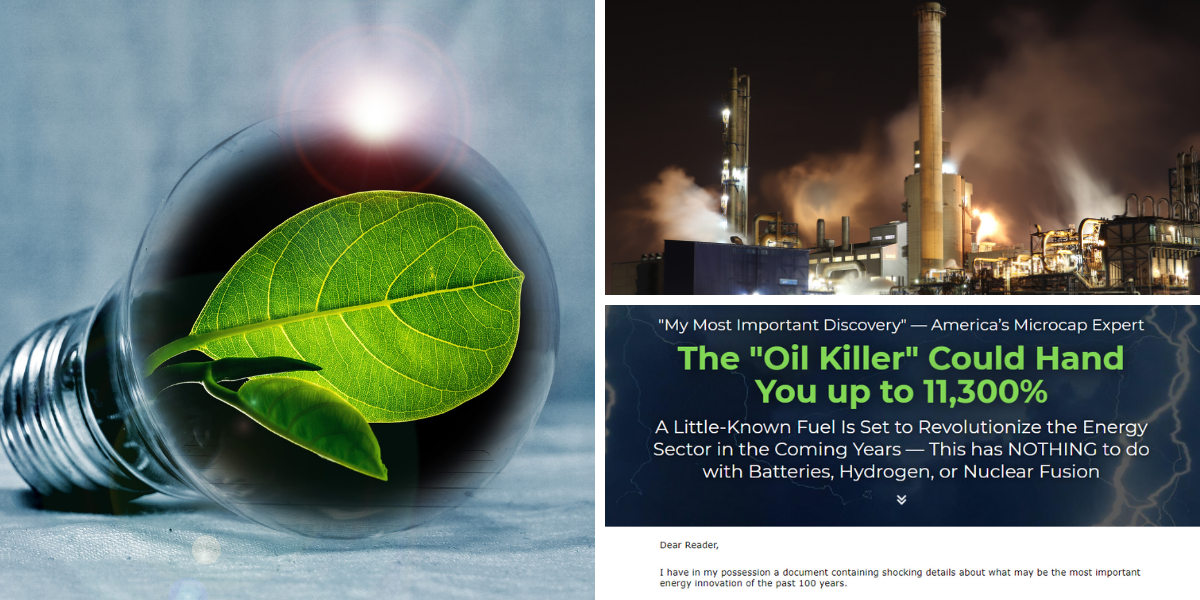 Alex Koyfman is not “your typical investment guru” as he’s never worked for a hedge fund or on Wall Street, like many others who hold themselves up to such esteem. But, his claim to fame is as a practioner, who’s achieved a 75% success rate with his model portfolio. With some of his gains ranging from 122% to over 350% in less than a year.

In one of his latest investment newsletter teasers, Koyfman teases a company that has found a new, innovative way to easily create ammonia for fuel, without using any fossil fuels in the process. He claims this potential  “Oil Killer” could make you more than 10,000% in just a couple of years, while also suggesting that you should invest in this small Canadian company as soon as possible. If you’re curiosity has been piqued, continue reading.

If you’re in for some exaggerated claims, strap yourself in as Koyfman starts us off by saying he expects this company’s profits to rise by as much as 11,000% over the next two to three years. He bases his projection on this startup’s innovative technology and patented invention that is supposed to create ammonia by only using air and water. We have heard similar claims made by Koyfman in the past, which we have reviewed. See Alex Koyfman’s Internet Fuel Company and Forever Memory Stock.

While Alex may not have your traditional financial background, his interest in finance and investing began at an early age and he was actively trading online by his late teens. After earning a bachelor’s degree from the University of Maryland, and a JD from Penn State, Alex made the decision to give up a promising future in the legal industry, and turned to trading and investing full time. Joining his longtime friend and colleague Brian Hicks at the now flourishing Microcap Insider investment advisory not long thereafter. The rest as they say, is history.

Alex continues his pitch by noting that a “disruptive invention has been developed in cooperation with the University of Oklahoma and that a Toronto-based company is behind it all”. According to him, “this technology could unlock an unlimited supply of cheap zero-emission fuel”, describing it as the foundation stone of modern existence. He believes the potential market for this invention is $1.5 trillion, which is why he is rushing people to read his special report and buy the stock while it is still extremely cheap by his own estimation.

Yahoo Finance apparently even lauds “this fuel as paving the way for zero-carbon energy”. However, while solar and wind energy currently represent most of the green energy market, one of their main problems is the lack of storage space to stock the excess energy and redirect it. This is where our Canadian company comes in, as not only does it claim to have found a way to use two simple ingredients to create a 100% green energy alternative, but also the way to store it so that it can be used whenever.

According to Koyfman, “this Toronto based company has discovered a way to create fuel locally – in a fridge-sized machine” and claims that it is 100% clean and highly affordable to boot, which is why his 10,000% or profit prediction is beginning to not seem quite as exaggerated.

Alex Koyfman gives all the necessary details about this particular company in an investment report named “The NH3 Revolution: How a Tiny Toronto Startup Beat a $3.3 Trillion Industry”, which is part of his investment newsletter, the Microcap Insider, which goes for $999 per year. 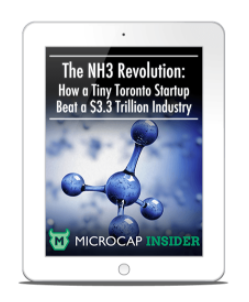 Included, you will receive weekly issues of the report and alerts, real-time buy and sell alerts, specific entry, exit, and target prices, complete research for all stock and company recommendations, as well as two bonus reports. And, if you’re not pleased with the quality of the package, you have 60 days to change your mind and receive a full refund.

For those who would rather do something else with their $1,000, here is what we were able to uncover for you, free of charge.

What Is the “Oil Killer”?

As previously mentioned, Koyfman’s pitch is about ammonia (NH3), which is a substance used both as a fertilizer and “a fuel that can power internal combustion and jet engines”. Unlike kerosene or petrol, it doesn’t release any carbon dioxide that threatens the air quality, which is the number one reason why over 140 countries are interested in this discovery, together with the US government, the US military, and dozens of private companies worldwide.

According to specialists, ammonia is supposedly 30% more stable under pressure than gasoline, which makes it less of a fire hazard, thus making it a potential replacer for petrol in all major oil-consuming industries, including transportation.

However, creating ammonia through the old, Nobel prize-winning Haber-Bosch process is not only expensive but also less feasible to be used on a large scale. This is why using ammonia as a potential fuel has been an innovative idea for almost 100 years, but it wasn’t until only recently that it was considered a true oil alternative.

To create ammonia, one would have to use large quantities of fuel and release carbon dioxide into the atmosphere through the burning process, which would pollute the air even more, apart from being expensive. However, “one inventor from a small town in Ontario found a way to produce NH3 without using any fossil fuels at all”. His machine is truly revolutionary because it generates ammonia “from nothing but air and water”.

Koyfman is confident that this invention could be worth billions and would also make a great investment opportunity for his readers. A chemistry professor named Bill David even mentions that “ammonia is the only zero-carbon fuel that will get you across the oceans”, which is why the author aptly calls this ingredient “the oil killer”.

What’s even more interesting is that even the largest oil-producing country in the world, Saudi Arabia, seems to have acknowledged the power of this ingredient and is now looking to export ammonia to other countries around the globe. However, creating it using the old fashion way is not sustainable on a large scale, but the invention of this small Canadian company could change the rules of the game.

And, if you’re wondering why a country that is rich in oil would even consider diversifying its economy and exports, the answer is that no mineral resource is unlimited. Eventually, the rein of oil will fall as more countries are committed to reducing pollution and replacing regular burning oils with green, alternative sources of energy. This will not happen for a very long time, but under these circumstances, a country that solely bases its economy on delivering one ingredient cannot assure its future indefinitely, and this is why Saudi Arabia is now exploring new export opportunities.

Ammonia is amongst the only products that can be generated indefinitely as it only requires water and air. On the other hand, windmills and solar panels remain conditioned by the weather and cannot be used to fuel an entire country and the transport industry.

There are several hints that Koyfman talks about but before revealing the name of his “oil killer”, let’s see what these are:

So, what company is the author referring to?

Right at the beginning of the presentation, we can see the picture of a partial patent from 2011, no. US2011/024382A1, which was granted to an inventor named Roger Gordon. He is the CEO and founder of Green NH3, whose website shows the same prototype used in Koyfman’s teaser, as well as a picture of Gordon’s ammonia-powered Ford pickup truck.

However, Green NH3 is a private-held company, which means you cannot directly purchase its stock the traditional way. Which leads us to the question – what exactly is Koyfman pitching and how can you profit from a company like Green NH3?

By digging some more, we were able to find that the company has signed a letter of intent to be acquired by EEStor Corp., which recently changed its name to FuelPositive Corporation (TSXV: NHHH.V). As of press time, the stock can be bought for under $1 per share.

The news is current and ongoing on this matter, but as of March 2021 Dr. Ibrahim Dincer (on the team with Roger Gordon) has accepted an offer by FuelPositive which focuses on the current and future sustainable NH3 intellectual property developed by Dr. Dincer. Gordon did not accept their offer.

It’s too early to say. As is usual, this predition is very speculative and you shouldn’t count on it. It would be advisable to do some additional due diligence in this case and look more into the talks going on between the companies.

Another thing to take into account is the ability of this company to mass-produce ammonia so it can supply it to the world or produce enough units of the machine so that they can be used by people without any specialized knowledge for agriculture or transportation purposes. Until these questions are answered and we see a well-anchored strategy to compete with mass produced oil alternatives, we cannot recommend buying the stock.

What do you think about investing ammonia based fuel? Do you think this particular small company has the ability to eventually disrupt the oil industry? Let us know what you think in the comments section below.