What Is Larry Benedict’s “One Ticker Retirement Plan” All About? 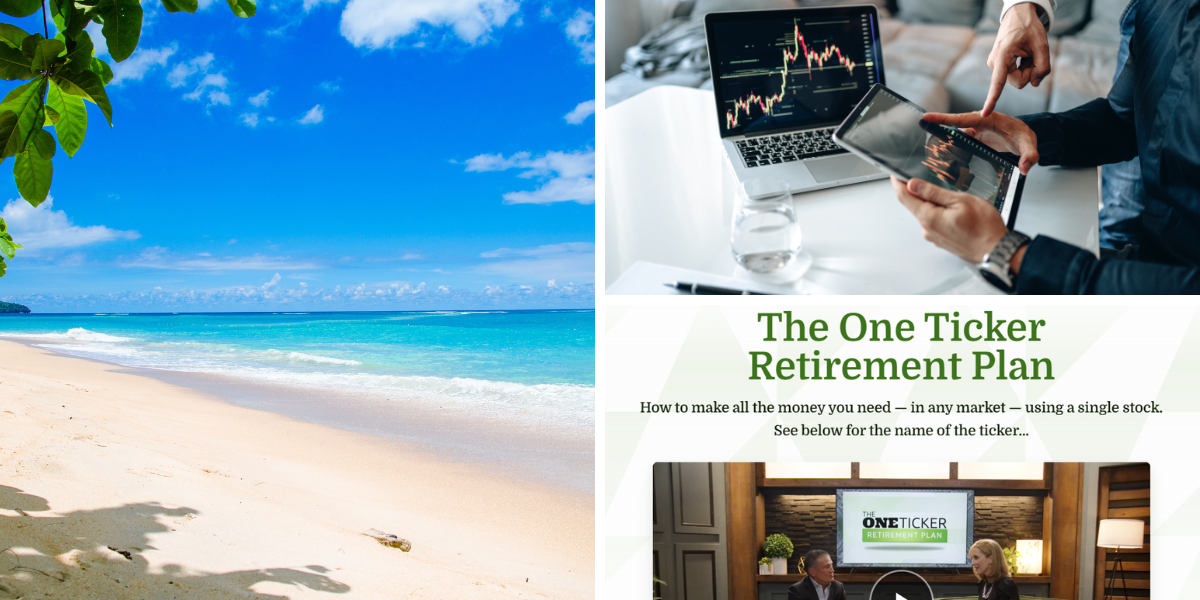 Now he’s going to show us how to make all the money we need, in any market, using only a single stock with a “One Ticker Retirement Plan.”

As evidenced by double-digit returns during the worst market in fifty years, Larry doesn’t invest the traditional way. His approach has nothing to do with “buy and hold” and it flies in the face of everything a financial planner would ever tell you.

Larry Benedict is the owner and CEO of The Opportunistic Trader, LLC. Which is a monthly newsletter for easy-to-understand trading plays. This may be the first time we’ve taken an in-depth look at one of Larry’s teasers, but its not the first time we have reviewed a trading strategy here at Green Bull. See 2x Money in 60 Days with Flow Trading and The Untold Story of Optionetic’s Co-Founder, as examples.

Today, Larry’s agreed to come forward and reveal his unique method, including the name of the ticker symbol we need to get started.

After doing a brief online search, it seems Larry has his branding on point. Monopolizing results for the term “one ticker trading.” He’s definitely not the first to apply such a strategy, but he may be among the first to commercialize it.

Being a professional trader for over 30 years, Larry picked up some things.  But it wasn’t until he got fired that he discovered his one ticker strategy.

He would get hired, start trading, and lose money. Over and over again. No matter what he did, nothing worked. Eventually, he realized what was missing: Specialization.

This became his new approach – Forget about 99% of stocks, forget about the latest fad, find one thing and stick to it. So far, so good.

Larry says his strategy boils down to just two rules, which he’s going to reveal next, along with the one ticker that he uses.

You knew it was coming…Larry’s put together a special report to help everybody get started using his special strategy called: The One Ticker Retirement Plan.

Inside the report is Larry’s #1 pick for today’s volatile market and a step-by-step guide on how to use small moves to potentially make thousands of dollars in both bull and bear markets.

Its all ours along with a companion report – Larry’s Guide to Options and much more. If we subscribe to the One Ticker Trader newsletter…for a special price of only $19.

The One Ticker Strategy in Action

Here’s how it all works according to Larry…

This flies directly in the face of one of the oldest mantras in finance: Diversification.

Of course, when things are bad (like this year), this won’t help much, with some $3 trillion in retirement savings wiped out so far this year. Larry says there’s a better way.

With his strategy, it’s “possible to make decades’ worth of gains in just a matter of days.” This is because as a trader, there are no bad markets. Billions of dollars are up for grabs every year. Even years like this.

Rule #2 is Use Options

Again in the face of convention, Larry insists that options are a dream come true for everyday folks, especially in a crazy market.

This is because options work whether stocks go up or down. All it takes is a small stock move in either direction for you to potentially see a huge winner…or a loser. It’s a doubled-edged sword.

As for an actual “over the shoulder” demonstration, Larry breaks it down like this:

He zeros in on a single ticker. Uses it for a period of time, a month, two months, maybe more. Then, when conditions change, he switches to a different one. Never trading more than one ticker at any given time.

The best part is with this method, we get to enjoy life. We’re talking about a few trades a month. That’s it. We get in, make our money, and get out. So, what is this one ticker?

Revealing the One Ticker for a Comfortable Retirement

This is the Nasdaq 100 Index ETF and it is a trader favorite.

There are a few reasons for this:

I suspect the last point is why Larry favors the predominantly information technology ETF. I say ‘suspect’, because our presenter doesn’t go into any depth about how to use the ticker.

The only detail we are privy to, is that this is an options trading strategy.

This is something I do know a thing or two about.

Can you really retire by trading options?

Well, nothing is impossible. But the most probable answer is no!

While I can’t speak to Larry’s strategy in particular, as it was never disclosed. I can tell you that about 90% of all retail traders lose money. The reasons are myriad:

If you elect to try out a strategy with money you can afford to lose, it’s no harm, no foul. But putting retirement money on the line is a hard stop.

For this reason and the others stated above, I cannot recommend options trading as a tangible wealth building strategy.