What Is Jeff Siegel’s EV Company (“Bigger Than Tesla: The Next American EV Powerhouse”)? – EXPOSED! 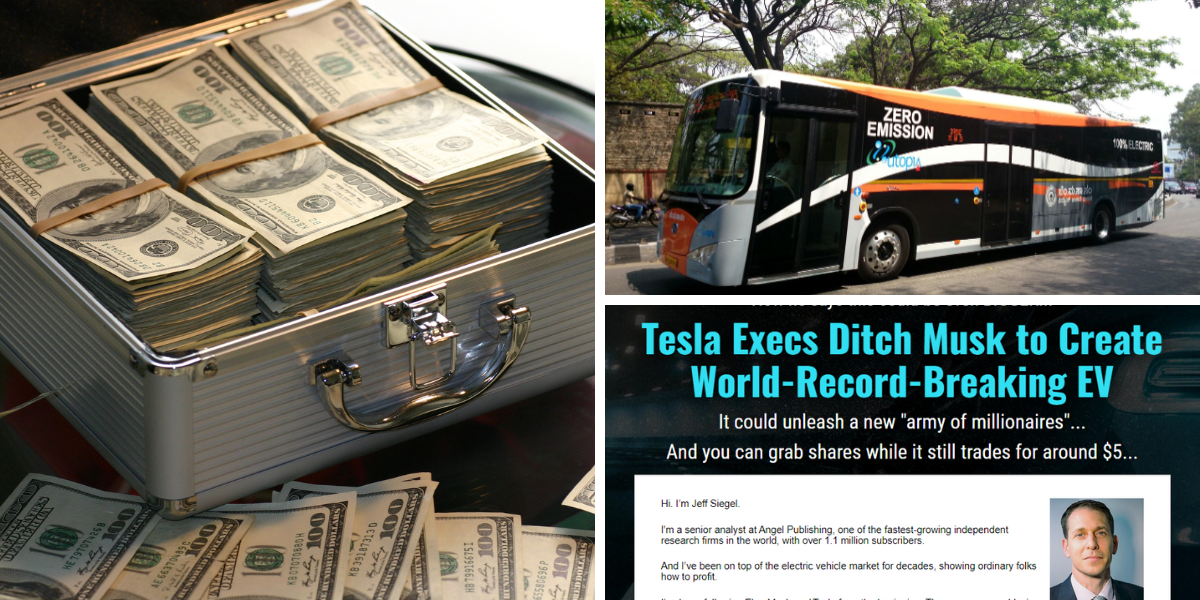 Angel Publishing Senior Analyst Jeff Siegel, who famously recommended Tesla after its IPO when it was just a $13 stock, now says he’s onto something even bigger.

He calls it “The Next American EV Powerhouse” and it could unleash an army of new millionaires…if we grab shares while they still trade for around $5.

Jeff starts the presentation off by saying that several former Tesla executives saw a unique opportunity forming years before anyone else. This is why they jumped ship and created an EV company that just set a new world record.

Jeff Siegel is no stranger to alternative energy and transportation markets, having written about them for Agora Publishing, one of the largest financial newsletter publishers in the world from 1994 through 2001. He now edits several regular newsletters for Angel Publishing and contributes his analysis to Fox, CNBC, and Bloomberg Asia, among others. See our reviews of Jeff’s previous work, including his #1 Biotech Stock and “Solar Window” Technology Stock.

The aforementioned world record is the longest distance ever driven by an EV on a single charge – clocking in at a whopping 1,102 miles!

For example, this means you could drive from Boston to Jacksonville, Florida, without having to stop at all. That’s almost triple the range of the best EVs out there. Heck, a 1,100-mile range trounces even the most fuel-efficient gas vehicles on the road.

Jeff says this is arguably the best-performing electric vehicle in the world, making range anxiety a thing of the past. Despite this, almost nobody has heard of the firm behind it, even though it’s based right here in the U.S. This works out just fine for us, as it could reward early investors with the biggest profits.

One major reason for this is President Biden’s massive infrastructure package, which is pouring some $9 billion into this sector of the EV industry. An amount that Jeff believes this company could capture the lion’s share of. As it is perfectly positioned to rake in billions from the electrification of the global commercial auto industry.

Jeff insists that if we buy into just one EV company, to make it this one and he’s compiled all the details on it inside a brand-new briefing called: “Bigger Than Tesla: The Next American EV Powerhouse.”

The Next American Industry to be Electrified

Most investors are focusing solely on passenger EVs like Tesla’s new Model Y. But this is only a sliver of the booming EV market.

Industrial vehicles of all shapes and sizes, including vans, buses, trucks, tractors, and even super-huge ocean vessels, are being electrified. Due to the massive savings in fuel costs and vehicle maintenance compared with gas-powered vehicles, we’re seeing huge demand for these from some of the world’s largest corporations:

This may be just the start, as states like California are outright banning the sale of gas-powered commercial vehicles altogether, meaning that all commercial trucks sold in California must be 100% electric by 2045. As of press time, 15 other states have made this very same commitment to electrifying their commercial trucking fleets.

The federal government is also planning to replace its fleet of cars and trucks with electric vehicles assembled in the U.S. This fleet is made up of roughly 645,000 vehicles and that doesn’t even include the nation’s 580,000 buses for schools and public transportation that will also be electrified.

As such fleets begin to go fully electric, the cost savings for transit agencies will easily run into the millions. Thus there exists a strong incentive for the mass adoption of commercial EVs. This is where the next American EV powerhouse comes in since this company produces what Jeff is calling arguably the best-performing electric bus on the planet.

With a range of 1,102 miles, it beats out even the most fuel-efficient vehicles on today’s highways.

It also possesses several other key competitive advantages, which we’re going to reveal along with the manufacturer’s name.

The Company That’s Going to be Bigger than Tesla

Jeff shares a surprising amount of details about his EV company pick, here are some of the best clues he offers up:

The #1 EV Play of the Century?

There is no question that the commercial EV sector is growing, fast. It is already a $250 billion global market, that is expected to become a $2 trillion market by 2028. Will Proterra be at the center of it or on the fringe?

The big catalyst here is government spending on clean energy initiatives, which Proterra has already been the beneficiary of to an extent. Securing electric bus contracts with both the California and Virginia Departments of General Services to supply zero-emission, battery-electric buses and charging stations statewide.

The Infrastructure Investment & Jobs Act which has been signed into law allocates up to $5 billion towards the purchase of new emissions-free school buses, like the kind Proterra makes. Given the company’s current market cap of just over $1 billion, even a quarter of these funds would mean an infusion of capital of some $1.2 billion or more than it is worth in its entirety today.

Personally, I like to see a business be able to stand on its own two feet, so to speak, and not rely on government subsidies or contracts in order to reach profitability. Despite a growing list of private sector clients that includes major automakers and industrial giants like Daimler, Komatsu, and Freightliner. Proterra has yet to turn a profit.

Time will tell and Proterra could go on to be an American version of BYD, the large Chinese electric bus maker backed by Warren Buffett. But I would hedge any bet placed on it, as it may not be the top EV play of the decade, let alone the century.

Are there any better commercial EV plays out there? Let us know in the comment section below.